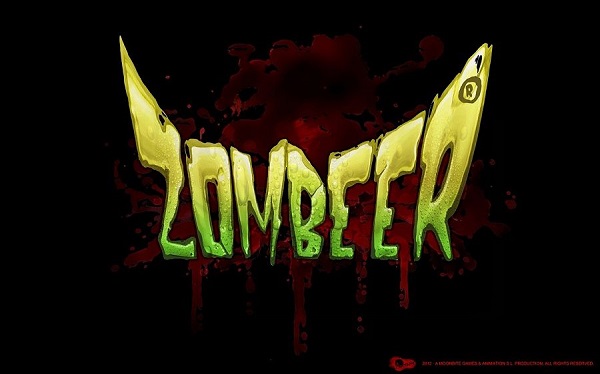 Today’s game considers itself an homage to “everything kick-ass about zombie movies and drinking beer.” That statement, which is featured on the game’s store page, should immediately tell you whether or not Zombeer will appeal to you, as it’s a parody game about a college student killing zombies while loudly proclaiming how cool it is to drink beer. Sadly, for all the comedic value it could have, the gameplay will likely let you down regardless of whether or not the jokes make you laugh.

Zombeer takes place in a weird universe in which zombies are everywhere and humanity now just lives alongside them. Pretty much everybody seems infected by now, but the strain can be held back by drinking the titular beverage, which supplies the body with a healthy dose of antidote and alcohol. After a night of drinking, protagonist “K” made an ass out of himself and his girlfriend, Karen, ran off, only to call him up because she is being held prisoner by the game’s villain and needs to be rescued.

The story comes second to the style of humor, which I find somewhat difficult to pin down. On the one hand, it celebrates drinking preposterous amounts of alcohol, which would have appealed to me back when I was about… thirteen years old. On the other hand, the humor heavily relies on references to other stories and a lot of these would be too old for eerly teenagers to get. It also comes off as really uninspired and obnoxious, as these references are presented without any sort of context. The first level, for example, has you walk around a chaotic city that suddenly has a section made out of Minecraft blocks with a pipe from Super Mario at the end. A few minutes later you got the cake from Portal sitting on a random table close to an office that has “REDRUM” written on the wall. It’s an endless barrage of random stuff with iconic value, which makes the game seem rather desperate to get even the smallest of giggles out of you. It got none from me. 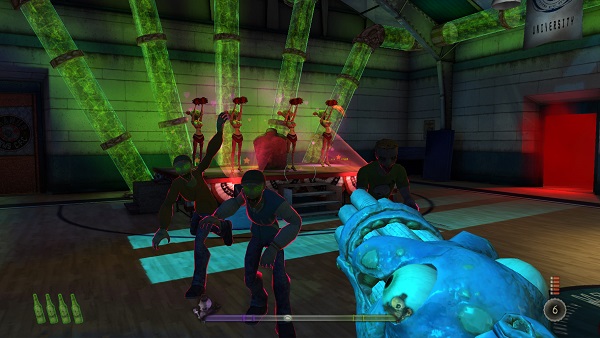 The gameplay is nothing to write home about either, you start with a pink dildo as your first weapon and soon after you’ll find a nail gun and a shotgun to supplement your arsenal. You’ll walk around mostly linear environments and sometimes a few zombies will attack as you progress. To be fair, the shooting mechanics are okay and the weapons had some decent effort put into their visual design. The hit-boxes are absolute ass, however, often having zombies I clearly missed drop dead anyway. On the plus side, there are different types of enemies and these work in surprisingly interesting ways. For example, there are cheerleaders that will power up other nearby zombies, so you can choose to take them down first or deal with the more powerful foes.

The game also utilizes the Zombeer beverage in a clever way, as “K” is infected himself and a meter at the bottom will constantly deplete. You must keep finding beers to drink in order to fill the meter back up, but if you drink too many and the bar fills too far, K will get drunk and eventually pass out altogether. Some zombies also spread an alcoholic aura, playing in on this balancing mechanic, and you can hack vending machines with a simple mini-game to supply you with infinite beers, at the risk of setting off an alarm that spawns a few enemies. This is especially useful to do when you find an area that requires some exploration or puzzling, as you may get stuck and run out of Zombeer otherwise. 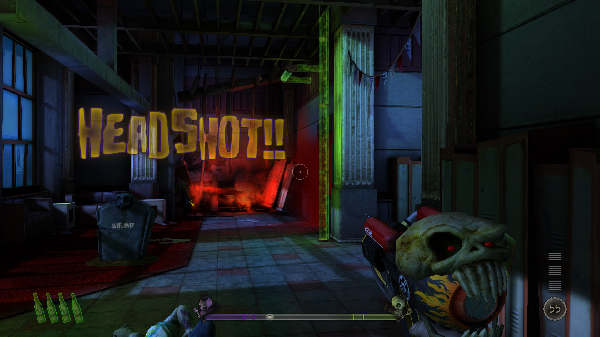 This is all held back by the game’s archaic design, however, which is in turn made more hateable because of how full the game is of itself. At one point, it even went so far as to lampshade its own mediocre level-design with an exasperated “how original”. If you are aware that you are making a scenario that is boring and overdone, then why are you doing it in the first place? Self-awareness is fine if you’re doing it for comedic effect, not as a way to downplay bad design elements. The most obvious example of this when a developer diary tries to explain why the team decided to include an incredibly awkward Skyrim reference (3 years too late to still be relevant, by the way) and only proceeded to make the situation even more awkward: “BECAUSE DRAGONS ARE AWESUM!”

Speaking of archaic, the game features quick-time events, completely unironically and terribly implemented. They happen at random points in the game, generally come out of nowhere, and if you fail a single prompt it will immediately give you a game over and set you back to the last checkpoint, which is sometimes several minutes back.

Finally, I’d like to say that I feel really sorry for the unity engine, whose logo is not only proudly displayed upon starting the game, but also in the level-design itself at one point. The dev diaries, again, speak proudly of how much effort was put into aspects like the boob physics, all of which is wasted effort as the game looks terrible, with ugly models for both male and female characters. The textures and props look okay if you put the game on the highest visual setting available, but being able to manually adjust separate settings is not possible, nor is there an option to meddle with the field of view, though, that is reportedly being worked on. The audio-design is equally messed up, particularly due to the game’s nasty habit of featuring music tracks that are way louder than the rest of the sound. 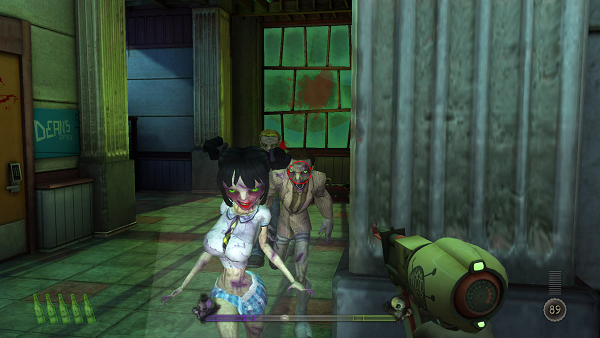 I think Zombeer had some good ideas behind it, the mechanic that requires you to keep drinking is neat and the zombies require some tact to deal with, so the moment-to-moment gameplay is sometimes engaging. Still, I have nothing but contempt for the comedy and shoddy game-design, plus, a parody on zombie games in 2015 is a bit late to the party, so there’s not much of a reason to go out and buy this. If you’re looking for a funny zombie-themed game, then I would sooner recommend House of the Dead or its spin-off Typing of the Dead: Overkill, the latter of which is on Steam. For those who have already played that and are looking for obscurer over-the-top zombie titles, there is always the Onechanbara franchise or the Highschool of the Dead anime and manga series.