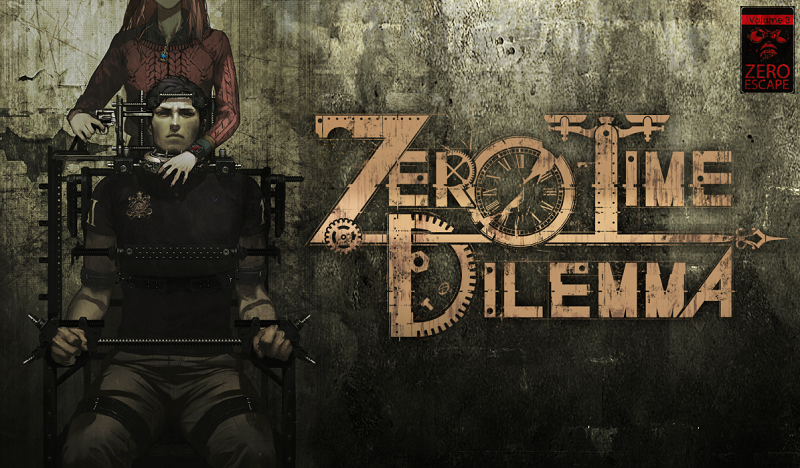 Warning: Both 999 and Virtue’s Last Reward will be mentioned in the review, lightly addressing prior character relationships. If you have not completed both of these games, please do not proceed.

There’s something about giving a videogame as a gift that’s incredibly personal for me. When a story is close to my heart, I often want to share it with friends and hope that I’m giving them something that will bring them a similar experience. I have several games that are sort-of my go to titles when I can’t figure out what to buy a friend, both 999 and Virtue’s Last Reward are some of my favorite stories to share.  After spending over 20 hours combing through puzzles and gaping at my Vita screen until well past my bedtime, I’ll be adding the series finale, Zero Time Dilemma, to that list.

From the beginning, Zero Time Dilemma had an incredibly difficult task to accomplish. Its predecessors are top tier in storytelling. Playing with concepts of shifting time to rework a story have always seemed like the cheapest of plot devices to me. However, the Zero Escape series takes this idea and subverts it. No longer is it a way to write the author out of a series of poor plot directions, every alternate choice is significant, methodical, and the smallest details send other realities spinning. In this sense, Zero Time Dilemma only keeps up the pace, with every choice and branching path bearing the same heavy weight they did in the previous two. The conclusion to Zero Escape only stumbles occasionally, but the writing and sound design are more than enough to save it from its faults. 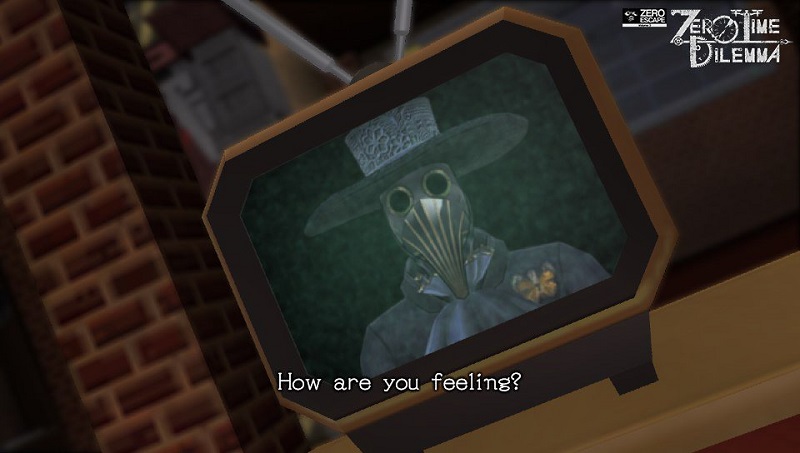 Zero Time Dilemma’s beginning is by far my favorite of the series. The setup is brilliant for reasons I can’t explain here, but still for those unfamiliar with Zero Escape, beware. Zero Time Dilemma is not for you if you still haven’t played 999 or Virtue’s Last Reward. There are too many small details to summarize the story thus far, so it’s preferable that the series director Kotaro Uchikoshi has never tried to shoehorn that into the game. The game immediately throws you into a world it assumes you are familiar with.

Nine people find themselves trapped in an underground bunker, playing The Decision Game that’s being orchestrated by a man simply referring to himself as Zero. Zero’s portrayal in the third installment is easily the best orchestrator of the deadly trials we’ve seen yet.  His voice, both in English and Japanese, resonates this sort of authoritative and haunting tone that I both looked forward to and dreaded when it was time for him to appear.

The cast of nine has some characters players are already familiar with. Junpei and Akane return to finish fleshing out the details of their past, and reveal what they’ve been doing since their participation in the last game. Sigma and Phi are also playing again, and these two probably get the most favorable treatment when it comes to series closure. Most of my questions for all four of these characters felt mostly answered, and that was the most important thing on my personal checklist. 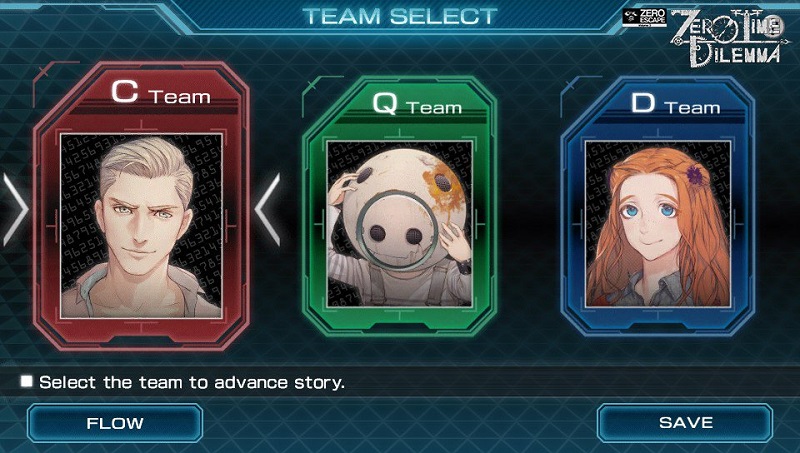 Diana, Carlos, Eric, Q, and Mira are all new to the game. Most of which I went into the story not expecting to care about, but that really only ended up being true for Eric and Mira. Unfortunately, while other characters felt like they were able to begin and end their arcs in Zero Time Dilemma, those two felt completely static.

The system for progressing through the story has also been changed, and it continues what Virtue’s Last Reward did by improving upon on how Zero Escape organizes the story with the flow chart. There’s the option to swap between teams C, Q , and D. You can complete every fragment open under a team in one go, or you can cycle through and get a glimpse into everyone’s story before progressing.

I started out tackling several of C’s fragments before deciding cycling through was a better option. I preferred getting a little context from more of the other teams before diving too far into one. Either way, some fragments unlocking under other teams are dependent upon another’s, so each will lock you out eventually before the story really shifts into gear.

Picking between fragments always felt overwhelming, but in a good way. You’re given access to all of these great scenes, and it’s difficult to choose where to start. Regardless of what choice is made, it’s always the right one, as the writing in cinematic instances is always on point, while puzzles and choices are just as captivating as ever. 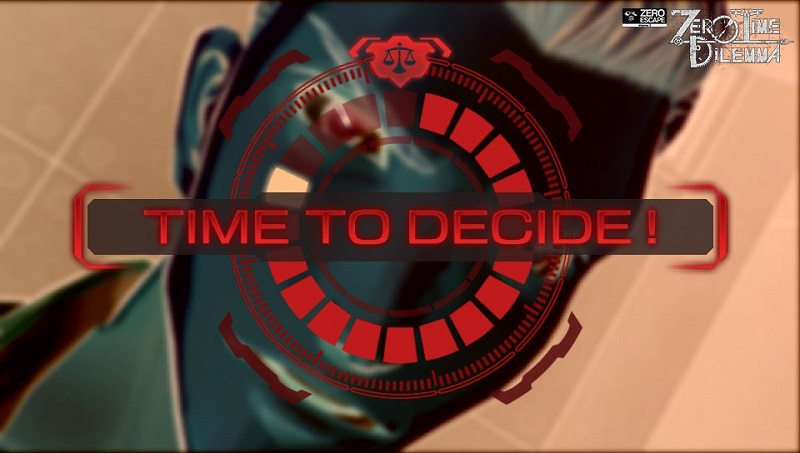 There is one thing though, that does seem to be to Zero Time Dilemma’s detriment in just a few of the choice fragments, and that’s the random number generating aspect. There’s no reason for it, and the addition of RNG just feels like lazy game design. There’s so much that Zero Time Dilemma is good at, so having me rely upon the random factor to take another route feels like the game is cheating itself. Thankfully, there’s the option to speed up the cutscenes, but having to replay something story based due to RNG is tiresome and completely unnecessary.

These slumps are minor though, and brief moments of frustration are worth plowing through as you work to Zero Time Dilemma’s hook. For Zero Escape, this moment is more special than the climax of any story. It feels different, as we have all of these different realities come crashing together in what is ultimately the climax of many stories. In that regard, Zero Time Dilemma nails it again. There’s a certain point in the game that once you hit it, it demands your attention from that point forward. For me, “I’ll just play for one more scene,” turned into hours of fighting sleep and pining for the next revelation in the plot. Once Zero Time Dilemma has you in that moment, it refuses to let go until the credits of the true ending roll.  It’s a hard game to play in increments, but that’s a good thing.

There’s little left to praise within the game’s story without spoiling it. While that element is truly the meat of the entire trilogy, it wouldn’t be Zero Escape without getting locked in a few puzzle rooms. These new puzzles present some of the hardest we’ve seen in the series, but after a few runs, some puzzles start to repeat and those were the ones I dreaded most. I don’t know how many times I rearranged X set of items into a box, but by the time I received the trophy for completing the last room I was happy I’d never see that puzzle again. Everyone who has experienced Zero Escape knows the series is capable of something better than this, so much like the RNG, it just felt unnecessary. 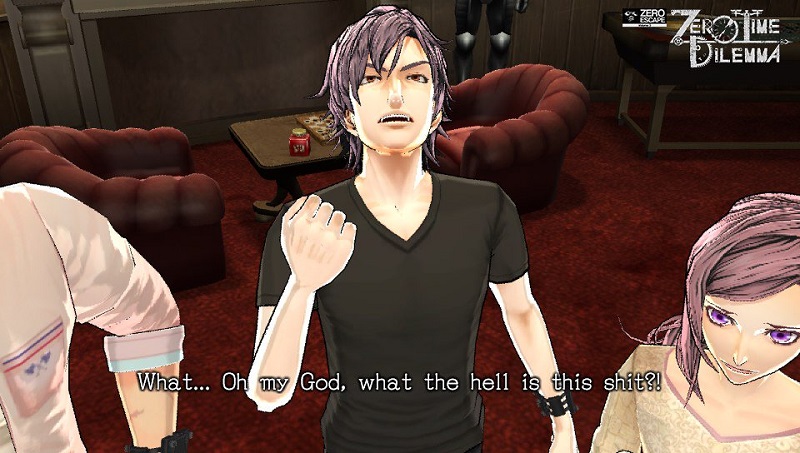 Unfortunately, Zero Time Dilemma’s most glaring flaw is animation. While I love the new direction of the art style, putting that into motion feels like a mistake. I would have traded half of those animation sequences for voiced dialogue and character portraits if it meant a few of those more intense animated moments could have been more fluid. At times, some scenes almost felt comical because of blocky arm and leg movements. Watching Junpei talk about how dire a situation is, only to turn away and glide across in the screen in a series of awkward movements lessens that sense of urgency.

Yet, I can forgive Zero Time Dilemma even for that much. Everything else remains true to the series. Even in its worst moments, the writing and sound design save Zero Time Dilemma and brings the series to a solid conclusion. Familiar tracks from composer Shinji Hosoe woven throughout the game gave me goosebumps every time, and his new additions to escape rooms eased the pain of being stuck on yet another puzzle.

For those afraid to face the end of Zero Escape, don’t worry, as this series couldn’t have asked for a more fitting end. Zero Time Dilemma continues to be a pinnacle in games storytelling that I cite when talking about why this medium is so extraordinary.