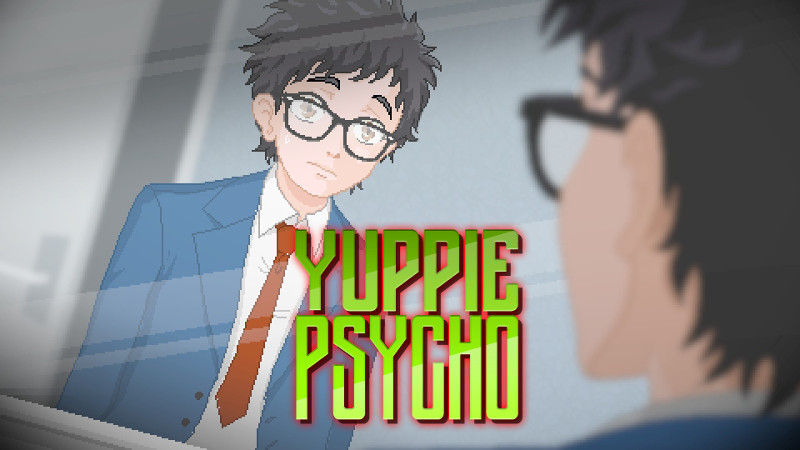 Never would I have expected to see a horror game make a photocopier terrifying, yet Yuppie Psycho managed to find a way. From the moment I saw the first trailer, something about the latest pixel art adventure-horror game from Baroque Decay (developer of The Count Lucanor) stood out to me. It might have been the “workplace horror” premise, the highly detailed pixel art, or maybe it was the eerie music. Whatever it was, it’s clear that my intuition did me right as I am pleased to say Yuppie Psycho turned out to be a fantastic experience.

Set in a vaguely dystopian future, the game follows Brian Pasternak, a soft-spoken man who lands a job at mega-corporation, Sintracorp. Much to his dismay, Sintra, an A.I managing the company informs Brian that his new job is to kill the witch tormenting Sintracorp’s headquarters, who is turning it into a living nightmare in which all sorts of creatures roam about. While most Sintracorp employees strive to ignore the horrors around them, it’s on Brian to figure out who among his peers is responsible for the company rotting from the inside. Across Brian’s journey players are introduced to a cast of likable and interesting characters whose plight they’ll come to genuinely care about (Sosa and Hugo being among my favorites).

Being a game set in a white-collar office space, Yuppie Psycho’s writing opts to cynically satirize the soulless nature of the corporate world, exemplified through Sintracorp’s motivational posters expressing the sentiment of ‘be grateful to be a Sintracorp employee, because you could be replaced at any time’. Fortunately, a lighthearted and witty sense of humor pleasantly offsets the rather dark nature of Yuppie Psycho. While the world may not be a pleasant one to live in, it was certainly one I wanted to return to after completing the game. 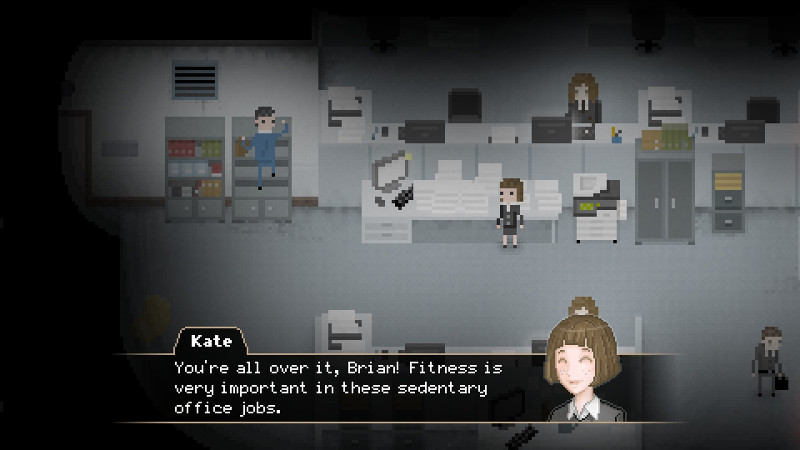 As for Yuppie Psycho‘s presentation, it’s spot on. The pixel art style works excellently for the game’s overall aesthetic, and considering the high-quality character dialogue portraits and a surprising amount of cutscenes, it’s obvious that an immense amount of care went into making Yuppie Psycho look as visually distinct and pleasing as possible. Furthermore, composer Michael Kelly, previously known for his work on VA-11 HALL-A, is responsible for the game’s soundtrack and it is certainly a memorable one, with pieces ranging from catchy tunes to tension-filled background tracks. 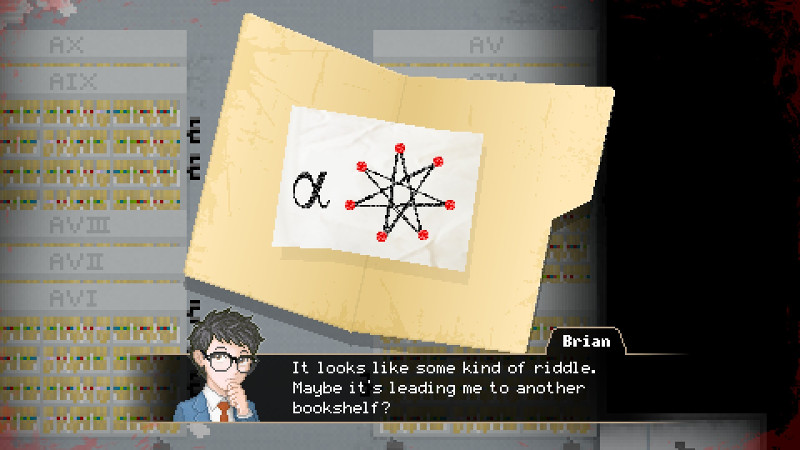 The gameplay of Yuppie Psycho mostly centers around puzzle solving and resource management. There are plenty of examples in the survival horror genre of poorly implemented puzzles with incredibly nonsensical solutions or ones so absurdly difficult that the game’s pace is slowed to a crawl without any real horror occurring. Thankfully, I can say that this isn’t the case with Yuppie Psycho. Puzzles are fairly simple but generally complex enough to make the player stop and think. Solutions may require one to work outside the box a little, but never to the point of being obtuse. Unfortunately, the abundance of puzzles does hurt the replayability of the game, and as a result, re-experiencing the story and achieving the game’s multiple endings are really the only incentives to go back for more.

Exploration is encouraged and regularly rewarded in Yuppie Psycho. While certain supplies appear in abundance such as batteries (almost to the point in which I wonder why the flashlight having limited power was even a mechanic), health items were a resource worth paying close attention to. A simple cooking mechanic in which players need to gather the necessary items to craft coffee and cheese sandwiches adds an extra layer to decision making, forcing the player to think twice about downing that stockpile of water when that same water could be used in a ramen recipe, providing three times the health. 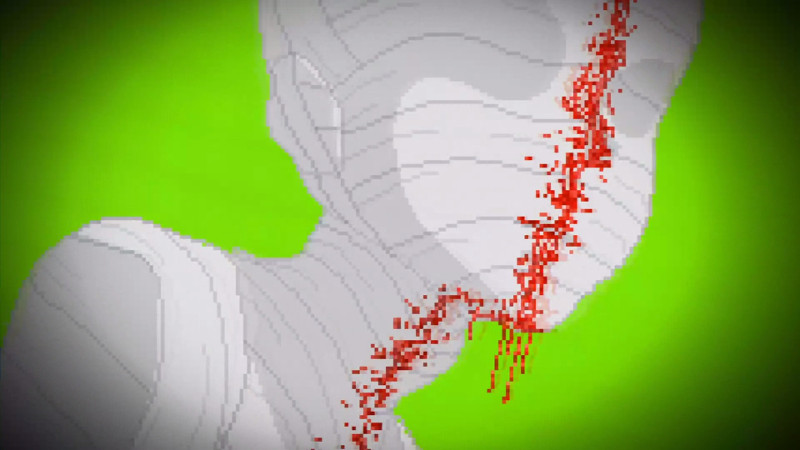 It is worth mentioning that in the final act of the game — after completing a particular puzzle involving paintings — there is a massive difficulty spike which continues through to Yuppie Psycho’s conclusion. Beyond this point, I found that being generally competent at survival horror games was no longer enough for me to progress, and memorization of the best ways to progress through each sequence to just barely scrape by until the next save point was necessary. While a difficulty curve is to be expected, this drastic increase made the last few gameplay sequences unnecessarily frustrating. Fortunately, I feel that this is an issue that could be fixed with some tweaking in a balance patch, and if such a thing ever comes to fruition, then my only real complaint with the game will have been addressed.

But there is one last aspect that we have yet to touch upon; how is the game’s horror? Most of Yuppie Psycho won’t leave you outright terrified, but the atmosphere and tone are established effectively from the very beginning and remains consistent until the end. Aside from a few moments of much-needed downtime, you’ll never feel particularly safe and will always wonder what horrors await up ahead. The shenanigans at Sintracorp gradually become more intense over time, eventually leading to some genuinely terrifying highlights that are emotionally bolstered by the saftey of Brian’s friends being at stake. 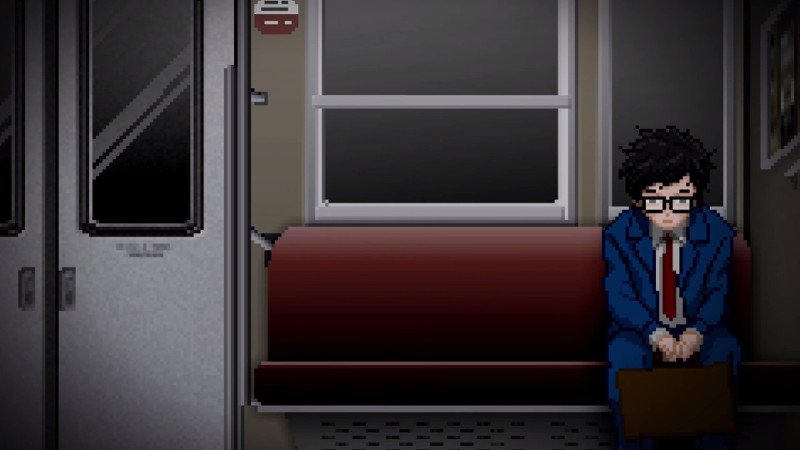 Yuppie Psycho does almost everything right for a psychological horror game, blending an interesting story, atmosphere, and characters with engaging gameplay. Whether you like pixel adventure games, well-written stories, or just simply being scared, Yuppie Psycho is a game worth experiencing at its full price. Stop reading this review, and buy the game on Steam here.