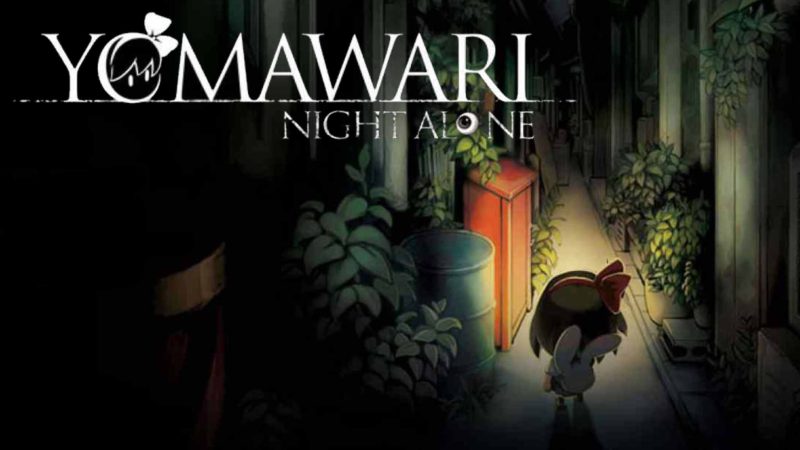 Hey, this review has a video version! Check it out! The full, written review is of course still below. 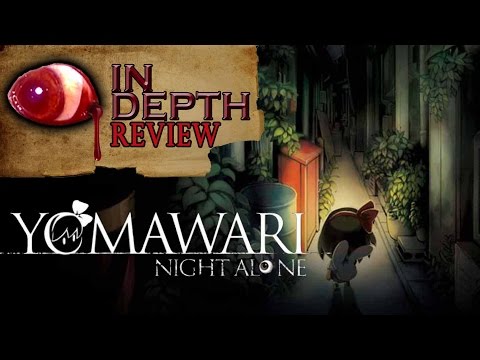 I really didn’t know anything about this game going in, other than it was described as being ‘Corpse Party like’. I’m a huge fan of that series, so jumping into Yomawari: Night Alone sounded like a good time. Well, I’m both satisfied, and a little disappointed, a little frustrated. I guess the very definition of a ‘mixed review’.

To start off, let me explain what exactly this game is about. We play as a little girl, (oh yeah, nobody has names in this game. Except the dog. He’s Poro. But the people don’t have names) walking her dog home as the sun begins to set. Like a lot of other games, the time is used to teach us a few of the game’s more basic mechanics, running, sneaking, etc.. It isn’t until we get prompted on how to pick up and throw items that this game lets us know exactly what kind of game we’re in for.

The girl, not knowing what to do, and feeling too guilty to explain what happened, runs home to her sister and tells her that Poro is simply missing. Her sister then promptly runs out into the city to go looking for him. A few hours pass, and despite being told to stay right where we were, the little girl decides to go out looking for her sister, and the dog (since I guess she didn’t fully understand the whole blood splatter thing).

Immediately, I really do have to comment on how lovely the game’s atmosphere is. As someone who routinely takes long walks, alone at night, this game does an excellent job at recreating the quiet ambiance of the dead of night. There’s no music as you explore, and the only sounds you hear are what the world would really sound like. The hum of street lights, the chirping of crickets, distant cars, and the hollow, echoey sound of our own footsteps. It’s great and gets even better with headphones, as sounds come and go as you pass their sources, and as you step over different kinds of terrain. A few unexplained sounds also add to the creep factor.

If I had to relate the atmosphere to anything, I’d say it reminds me most of Fatal Frame 2: Crimson Butterfly. There is a very similar feeling of ambient loneliness at night in both games, and FF2 concentrates a lot more on the quiet moments, letting them heighten your tension for the actual scares.

I also really love the visuals and art style. It’s clean, crisp, and well animated. I have a particular love for heavily urban Asian cities, the wires stretched everywhere and air conditioning units hanging out of nearly every window. It’s very industrial, and this game captures that well, along with other more traditional areas like shrines, a graveyard, and regular old neighborhoods.

Of course, after a while, you’ll eventually run into… the monsters. You can’t fight them, and only a few of them seem to pay any attention to things you can throw, like rocks and matches. You can hide from them in bushes and under street signs, with a mechanic similar to the one in Corpse Party: Blood Drive, that lets you know how close/far a monster is while you’re cowering. It’s serviceable, I guess, if not particularly original.

Death doesn’t send you back particularly far, and in the right circumstances you can even use it to your advantage as saving at one of the Jizo statues (at the cost of a coin, but they’re so plentiful throughout the world I was never wanting for more) will spawn you there, complete with any and all progress you’ve made regardless of your death – but there can still be a tremendous amount of frustration due to a few absolutely mind boggling bad mechanics. First of all, there’s a bunch of creatures in this game that can’t be seen unless you directly shine your flashlight on them, and if you don’t know where they are yet, the only indication that there’s anything there is a heartbeat sound that speeds up the closer a monster is to you. This can be frustrating when you die over and over again because you simply don’t know where you’re being attacked from.

Even worse is the game’s running mechanic. I have never played a game with something so frustratingly obnoxious. Your running distance is attached to how fast your heart is beating, so the closer an enemy is to you, the less you can run. It’s ridiculous, and there are dozens of times I found myself just shutting the game off because I couldn’t handle dying one more time because the game put me in a position where I had to run away from something. Other games have stamina mechanics, where running for too long will cause your character to run out of breath and eventually slow down or even stop to take a breather, but this is so much worse. You simply lose the ability to run as far when you’re close to a monster. It’s like playing a shooter where you can’t fire as many bullets the closer you are to an enemy. It’s ridiculous.

Like I said, death itself doesn’t carry too much weight, but when you’re simply trying to travel from point A to point B it can become extremely frustrating to die over and over again because you simply couldn’t see the damn monster, or because you couldn’t outrun the thing.

The game tries to create a Silent Hill Origins otherworld switching mechanic in its later stages that are a little bizarre as well. In the Silent Hill games, (hell, in most games that have some alternate reality) the otherworld was the last place you wanted to be, as creatures became more messed up and ferocious, and overall there was simply less control over your safety as the rules could literally be changed to anything. Here, the opposite is strangely true. You use the switching mechanic to basically solve a puzzle but for some reason the dark red, spooky nightmare world (one of the few places to have any real music to speak of), but you’re jumping into the nightmare world to avoid danger. Maybe that isn’t supposed to be the case, and this isn’t supposed to be a nightmare world, but the area looks a whole hell of a lot like one, and it just feels wrong that the ‘real’ world is the one we’re trying to avoid.

If I had to describe the kind of horror this game goes for, I’d say… abrupt. If I’m being honest, the game is basically nothing but jump scares, but as someone who isn’t a particularly big fan of jump scares these were actually done surprisingly well. They very rarely felt cheap, and because of the otherwise quiet ambiance of the game, I felt that it had earned a lot of them, too. That isn’t to say they’re all great, but for the most part, I actually really enjoyed them.

The monsters are equally enjoyable and disturbing. Ranging from more normal things (spooky Japanese woman with long hair in a white dress, people with flashing lights for heads) to some truly Lovecraftian horror designs. I can’t say that all of them succeed at being necessarily scary, but a lot of them are at least interesting to look at. Some of the best ones are the creatures that are simply difficult to describe.

Of course, again, the atmosphere and story manage to keep this game engaging. The general tone is very sorrowful, and over the course of the game, you begin to learn that not all of the monstrous spirits are necessarily evil, and simply need to be laid to rest. Ultimately, a lot of understanding the game’s plot kind of relies on a basic knowledge of Japanese folklore and Yokai, and you’ll very literally have no idea what happened at the ending of the game without that. The story was a lot better than the sort of generic thing I was afraid it was going to turn into.

Overall, I fall pretty much straight down the middle on Yomawari: Night Alone. Beautiful world, art, and sound design, and an interesting story I wasn’t able to predict. But the gameplay has serious, serious flaws that keep it from really being any fun after a certain point. It’s a shame because I feel like it almost comes close to being the same kind of ambient, and genuinely frightening experience we got from something like Limbo, but that game had a significantly better sense of game design, with even simpler gameplay. I’d only really recommend this game to the hardest of the hardcore Japanese horror fans, because honestly, the game is just too much of a chore to get through after a certain point for the casual to want to pay money for it rather than just watching a Let’s Play on YouTube.