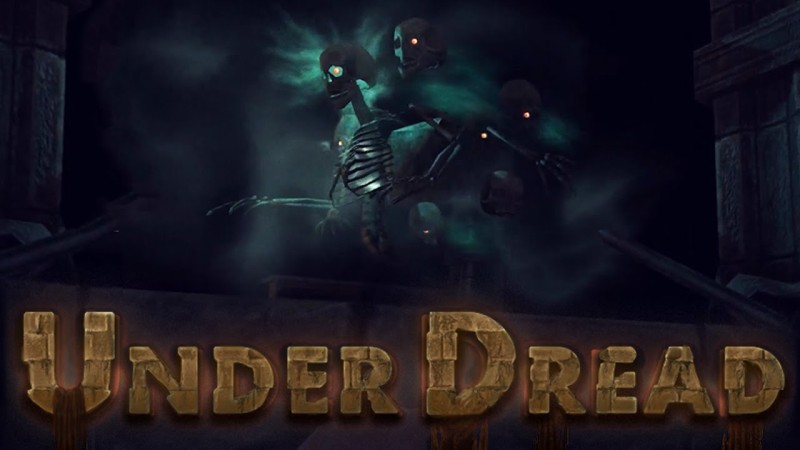 It takes a long time to review a game you do not like. You have to consider whether it is your personal taste causing the problem, or the game’s design and development. It is by no means an easy process, because deciding that a game just isn’t fun despite being technically sound is disheartening. This review covers a game in that category. The sound is beautiful; and the graphics are admirable, but the game itself is just not good.

UnderDread is an indie game apparently its second iteration. Five minutes into this version, you get the sinking feeling that you’ve been duped into playing a bad Slender Man game. Thirty minutes and two glasses of wine later, you are sure of this. After I realized that the game’s lore was looking a bit lanky and pale, I looked into its origin. It is, in fact, Slender related, which makes it a success at what amounts to the Rickroll of horror. If you want to play this game’s predecessor on your mobile device, you can look for it as SlenderMan Origins 2 Saga. 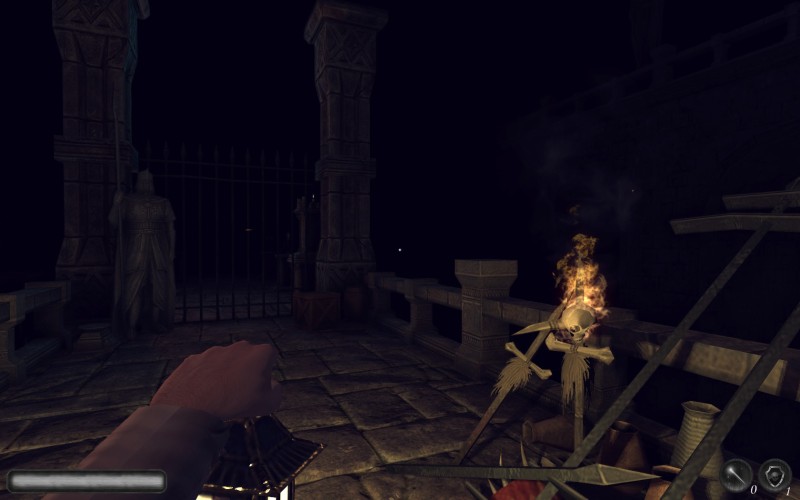 The problem with Slender Man is not the mythos. I loved the Marble Hornets YouTube series and enjoy the occasional well-done Slender story. As a gaming narrative, Slender Man has a well-deserved reputation for unoriginal and broken games. I could get behind a good Slender game if anyone ever opted to make one. This game continues the streak of disappointment.

UnderDread is pretty terrible. The game is punishing in all the wrong ways. It has too little story for the time it requires and is about as much fun as a deserted Bingo hall. The developer seems to have noticed that the game was edging off towards being too arbitrarily hard to remain fun, and decided to intervene on players’ behalf. The developer chose to handle this by introducing mandatory hints and linear puzzle progression. Hand-holding in a game is a pet peeve of mine, especially when it rips you out of enjoying the game to explain standard PC game controls. The first area of this game does that repeatedly, and then moves on to not letting you do anything that might help you later. 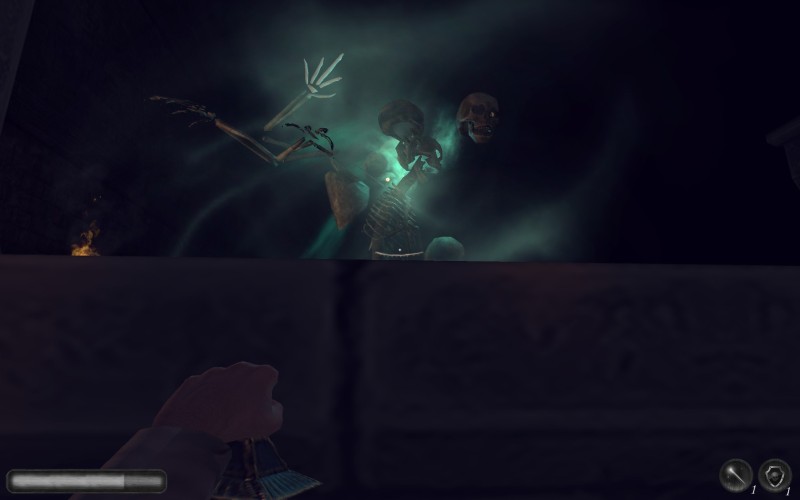 Early in the game, you wander a room and attempt to escape by pressing every single item to open a door, all to no avail. After clicking the “hint” button, the item acting as a switch glows and works as it should. There is also a glowing path floating between your character and the item after you press”hint”. I found that several items would not activate until I did this, at which point this became a game of hide-and-go-seek without any critical thought.

UnderDread doesn’t handle the hiding or seeking well, either. The seeker cannot see you if you hide behind a 2-foot tall wall or stand too far away. The enemy you’re avoiding moves in a scripted pattern that gives you ample time to move between areas. It’s more confounding than scary, which doesn’t make for a good horror game.

The linear puzzles are the icing on the already terrible cake. Horror players have a Pavlovian training to pick up any interesting item we see in a game. The halls of UnderDread are full of items that look useful and out of place, but you are not able to touch them. You must instead traverse the entire area multiple times, picking up or flipping switches for one puzzle at a time to activate the next set of items. You must do this while running from an enemy who sounds as though he is attempting echolocation with a French horn. 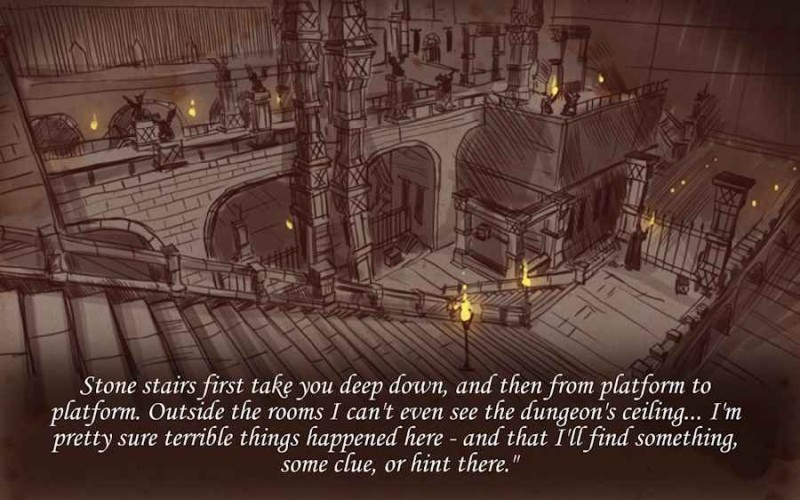 I played through most of UnderDread. I ran back and forth across the map too many times to count or care, and then I just couldn’t. One of the first drawings used as story background shows the entire playable area of the game. The one enemy patrolling that entire area is not hard to avoid, just annoying. Finding the puzzle pieces isn’t hard, especially after your twentieth trip around. Even when you get through the main hall, you have to go back up and through it again to pick up an item you couldn’t touch before. There is no skill involved here, you are not allowed foresight, and the game is just not fun.

The worst part of reviewing UnderDread is seeing the potential in it. The setting, graphics, and sound of this game belong in the Amnesia series. I am fairly certain that UnderDread runs on the HPL engine because the visual setting is Amnesia down to its very core. Had the developer spent more time on it, with a fleshed out story and more areas instead of retracing the same path dozens of times, this could have been a great game in that vein. I don’t think the developers are bad. I think they are probably still getting their feet wet in developing, and this was not quite ready for production. 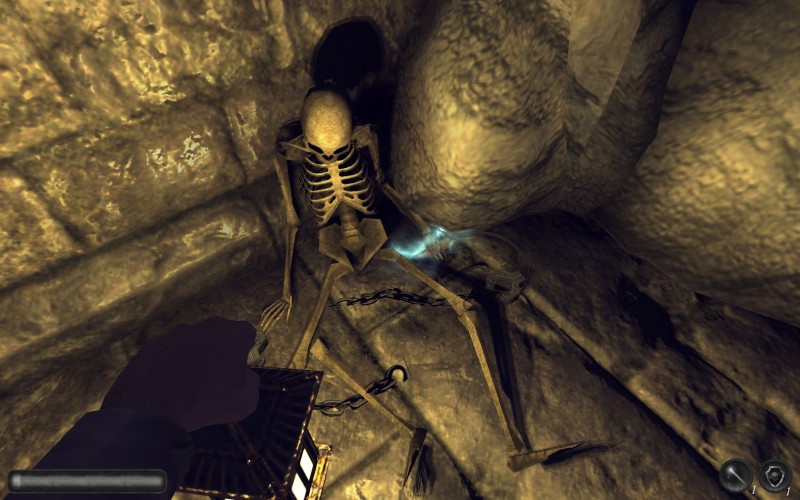 With more time and experience, this could have been fun. With where it is actually at, there is no reason for me to recommend it to our readers. I do hope that the developer tries again in the future. They show a lot of promise if they are willing to consider what was aggravating to players in this one and use that to improve their next effort. UnderDread is not the worst game I have played. It doesn’t give me enough reason to keep playing it, though. I just don’t have it in me to keep playing this one.