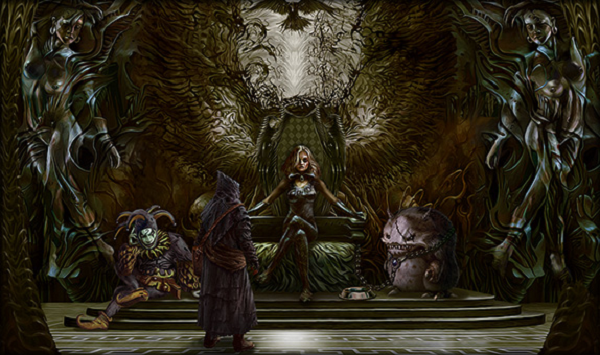 On the twelfth of May, 2014, H.R. Giger died from falling down a set of stairs at the age of 74. On that day, the horror scene lost one of its greatest champions: the man who created many famous creatures of the night, including the Xenomorphs from the Alien franchise, which remain iconic for horror to this day. Today’s game is a homage to Mr. Giger, a point & click adventure game that marries his style with that of another artist, Polish painter Zdzisław Beksiński, to create a game that may end up being the best indie title to come out this year. Any fan of horror games which contains puzzles would be doing themselves a disservice by not giving Tormentum – Dark Sorrow a try.

The plot kicks off in medias res, with the player character – a hooded figure with amnesia – locked in a cage that is transported via zeppelin. A fellow prisoner, a human-sized rat, kindly informs you that you are being taken to a castle where the knights are obsessed with purifying the souls of the prisoners, washing away their sins with ceaseless torture. Upon arrival you are immediately locked in a cell, but through a series of puzzles you escape and begin a journey to find a way out of the castle, recover your memories, and find salvation for your sins on your own.

The game’s visual design is definitely its most prominent feature on offer, presenting players with a breathtaking alien world filled with grotesque imagery. Most of the early game is spent inside the castle, where various acts of torture can be witnessed and the monstrous knights wander the halls alongside ugly beasts that serve as guards. Later on, you get to explore the wasteland and interact with the strange creatures that inhabit the world, taking players to blood-soaked battlefields, gothic cathedrals, and monster-filled mines. The game really loves its architecture and monster-design: both are made to be towering and impressive, making it all the more fulfilling when you finally slay a beast or figure out the mysteries of a new location. You can also expect a lot of death and decay, especially early on when you meet the various victims of the castle and see what is inflicted upon them. It isn’t overly gory, however, so those with a weak stomach are relatively safe and can enjoy the more imposing side of the art without worry. 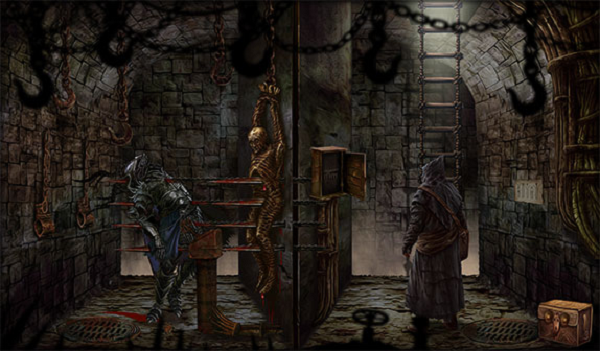 Being a point & click adventure game, gameplay is mostly limited to interacting with the environment by clicking on objects. Tormentum handles this quite excellently and dodges some of the pitfalls that often make games in this genre tedious to play. For example, it’s always clear what items you can pick up or interact with, as some have a glow on them to highlight their relevance or the way they are placed just naturally draws attention to it. The player can also find hints for the various puzzles, which are then automatically recorded in a handy notepad.

Puzzles also generally involve more than “use item X on item Y”. Even something as simple as opening a locked door will generally involve something special, like having to align the bottom row of a locking mechanisms with those on the top. In terms of difficulty, I’d rank it about average; some riddles kept me busy for a while, but none were hard enough to make me give up or reach for a walkthrough either. I will say that some parts of the game really phone it in a bit, relying on puzzles for which the hints blatantly spell out what to do or just using standard ones we’ve all seen before. It even features a mandatory tetris mini-game in the same room that has you solve a sliding-block puzzle. Still the fun ones vastly outnumber the few bad examples I could give.

Besides that, most of the gameplay is just clicking on the arrows to move between screens and following the directions given to you via non-player characters. There is a pretty strong sense of pacing all throughout the game and I always felt like I was making some progress towards finishing the objectives I was presented with. The areas, while beautifully designed, are also compact and don’t suffer from any needless padding. Everything in the game is put to good use and while it only took me three and a half hours to complete the game once, it definitely felt longer as a result of this. 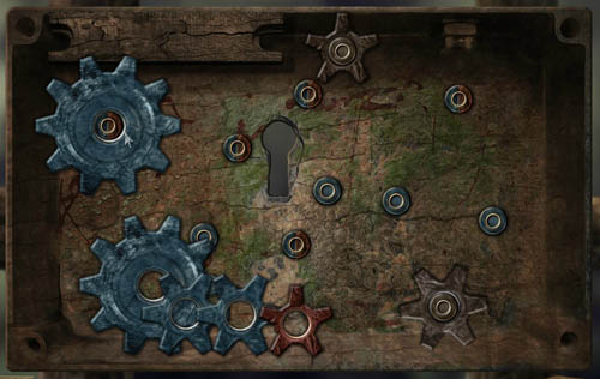 The aforementioned non-player characters are pretty interesting and diverse, even if they mostly serve to give you the objectives you must work towards or to block your progression. Their strength really lies in the little side-stories you uncover as you interact with them, since quite a few people will continuously reappear throughout the story. I figured the rat-man from the start of the game was just some throwaway character to introduce me to the world, yet by the end of the game I still had encounters with him and his situation had drastically changed. Dialogue can be a bit lengthy and suffers from a few typos, but I was intrigued enough to ignore these errors. The game’s setting is somewhat under-explained, however, as we never really learn much about the castle we begin in or how anything else in the world functions. Tormentum’s environments looks stunning, but the plot tying them together is pretty flimsy and suffers from some inconsistencies when you really sit down and analyze it. 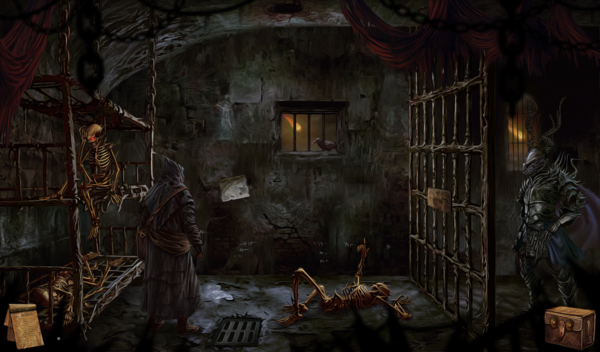 There is also a degree of choice available to the player, as several moments will let you decide how to handle a situation. One scene featured in the trailer has a giant spider assault a guard, yet when you get there in the game, you can actually choose to spare him. This is all part of the game’s ongoing theme of finding redemption for your sins, even though the player-character has no real clue as to what those may be. While it’s fun to have room to decide, I feel that it comes off as too heavy-handed; it’s a black & white, evil or good setup with no gray area, and in the end the game will just spell out everything you have done and give it a label. This resulted in me getting the bad ending because twice in the entire game I chose to do something it considered evil and on one occasion my decision was perfectly reasonable given the information I had at the time.

While the storytelling leaves a lot to be desired, it’s an easy fault to overlook in a game that clearly pushes its aesthetic more than the lore bringing it together. Since the gameplay is also enjoyable, I recommend going into this for the fun puzzles and beautiful art, while paying only basic attention to the plot. As I said at the start of this review, you’ll be doing yourself a disservice if you pass on this; at the very least give the demo available from the store page a shot.