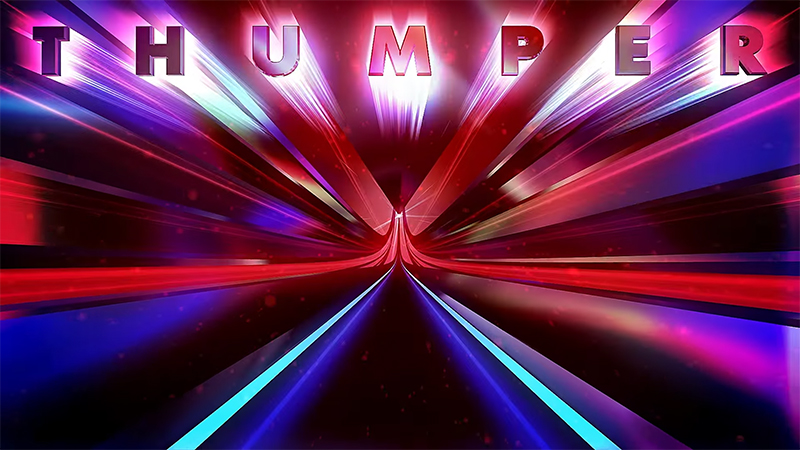 The subtitle on Thumper’s website immediately sold me on it: “A Rhythm Violence Game”. While the only time I can recall horror being fused with rhythm games is the well-received indie PC title, Stage Fright; Thumper goes on to show that this odd fusion of genres can really work, especially with a giant sight-depriving box on your head.

On the most basic level, Thumper functions akin to a runner game with dodging and absorbing obstacles as you slide down its (initially) single lane, matching the beat of the music as it carries you onward. There are nine levels in total with multiple stages and bosses within them. No real story (at least from what I gather) is in place but Thumper doesn’t need one. Its main objective is to make your heart race due to the intensity of things flying at you and feel claustrophobic due to its mesmerizing visuals. Starting out with some abstract geometry on a rollercoaster ride from hell, it very slowly becomes more corrupt and freaky as you get farther into its endless void.

Both developers of Drool are ex-Harmonix and it shows. Providing a simple interface and smooth framerate that carries you throughout the whole experience, the game gets you into “the zone” quickly as you fly through the patterns at a blistering pace. While the soundtrack that plays throughout is mostly an industrial series of beats, there’s moments of ambient drones between levels that give you a breather before sending you back in. The “Rhythm Violence“ angle comes into effect as hitting along to the percussion is an engaging experience on an aural level and your little beetle-like avatar slamming against things violently excels on a visual one. The mid bosses you face are screen-filling and nearly eldritch in their presence. Ranging from giant geometric portals with jagged teeth and tentacles to pulsating starfish that look like they’re made out of galaxies. At the end of each stage is a zombie-like head that starts simple (yet off-putting) but mutates into something completely demonic by the title’s conclusion. 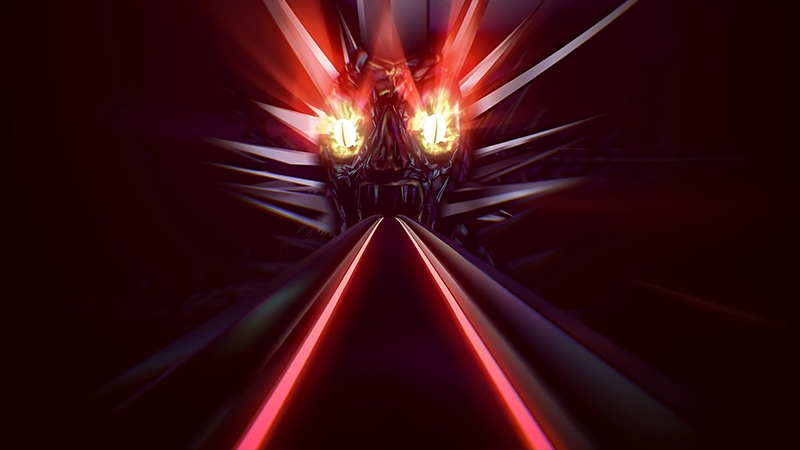 This is an “easy to learn, difficult to master” type of game. The “thumping” mechanic taught a third of the way through allows you to combo off notes and provides a satisfying slowdown effect when done properly. When swerving around corners, you can hold a direction to grind across it without much risk, but doing it at the exact moment it matches the music (which is the most dangerous) allows you to keep a thump combo going along, while providing extra points.  Thumping also allows you to recover one shield of health, which is vital since you can only make two errors before dying. This adds an element of offensive gameplay that benefits players than just for scoring as I regularly had to leave my comfort zone to gain that peace of mind from not dying instantly. As I neared completion, I was playing safe (lame) by getting mostly mediocre scores and grades as I just tried to stay alive. Akin to the finales of games like Bit Trip Runner, you’re getting easily white-knuckled as you grip onto your controller, but with the added horror-element, it’s downright stressful (in a fun way). 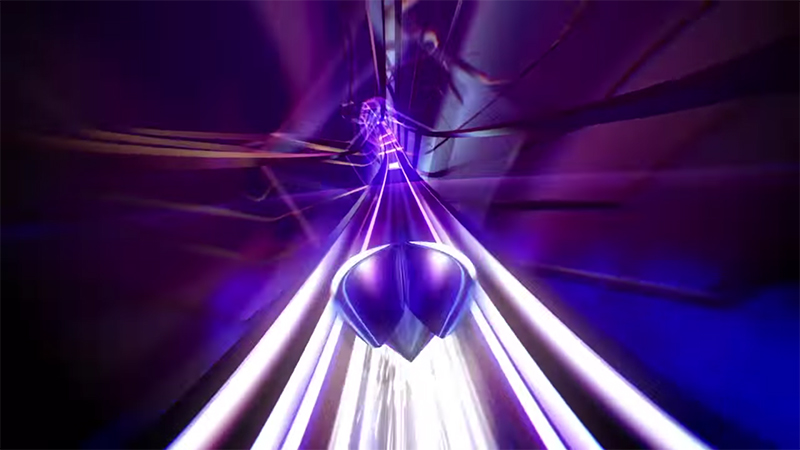 Thumper is an alright game on its own, but what separates it from the rest is its PS VR capabilities. From a layman’s standpoint, it may look like everything is zoomed in more but that is a very naïve perspective. Being that the camera is pitched behind you, the game is actually a little easier to read and was vital for me to survive the last few level’s speed. Now that you’re essentially having the whole game wrap around you, the effects on the boss surround the entire screen and make them appear far more intimidating than before. The added depth VR provides makes it easier to gauge your location and time your button presses. Getting the 3D audio through the PS VR’s setup made sound effects “pop” more than it would coming out of your TV’s speakers or sound system as well. If you have both a PS VR headset and this game, there’s little reason to play it vanilla.

Because of the perspective that doesn’t jolt the player around, Thumper isn’t going to cause much headache issues in VR either. I sat down for over two hours to finish the game and didn’t feel uneasy (on a digestive level) like I would in other PSVR titles; in fact, I sat down to redo an older level immediately after beating the game. 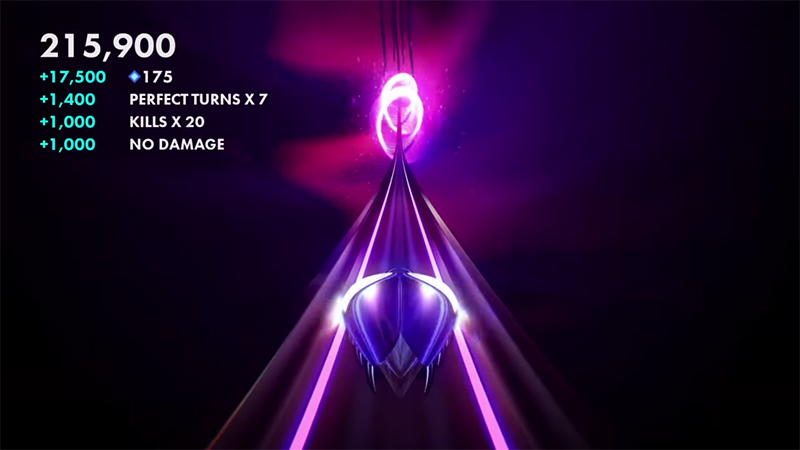 My only major negative with the game is it somewhat stays past its welcome. Instead of giving you bite-sized 4-minute courses based on single songs, you’re playing one of Thumper’s levels for 20 minutes to even as much as an hour if you’re screwing up (on both surviving or later on, trying for high scores). Some patterns start repeating when you’re thinking “Okay, I’ve already seen this before”, and some segments of levels are four or five times longer than others. Because of the repetition with the music, you’re not going back into it for individual songs you like akin to other music games. I would’ve preferred less levels and more bosses overall as, despite the difficulty, they were the most awe-inspiring aspect. While you’re definitely getting your money’s worth, it perhaps lasts a little longer than it needed to.

Smaller gripes deal with some of the audio cues. Some notes made by thumping or dealing damage to a boss don’t always match the 1/4 or 1/8 timing that everything else in the game does, so it could throw you off. When the slowdown effect happens with a thump, it can mess up your timing as well since they vary in duration. Last, there are some centipede like enemies late in the game that just require dodging but with no audio cues or feedback that goes along with the music; although matching in the game’s creepy atmosphere, they feel out of place with the rhythm.

Thumper is one of the most goddamn intense games I’ve played all year and if you need a new rhythm distraction for 8 hours or just a good/non-urpy VR experience, this is a good value at a small cost.

Technical Note: The game was completed with Playstation VR and up to Level 3 was beaten with a conventional setup on the Playstation 4.