Review: Through the Woods 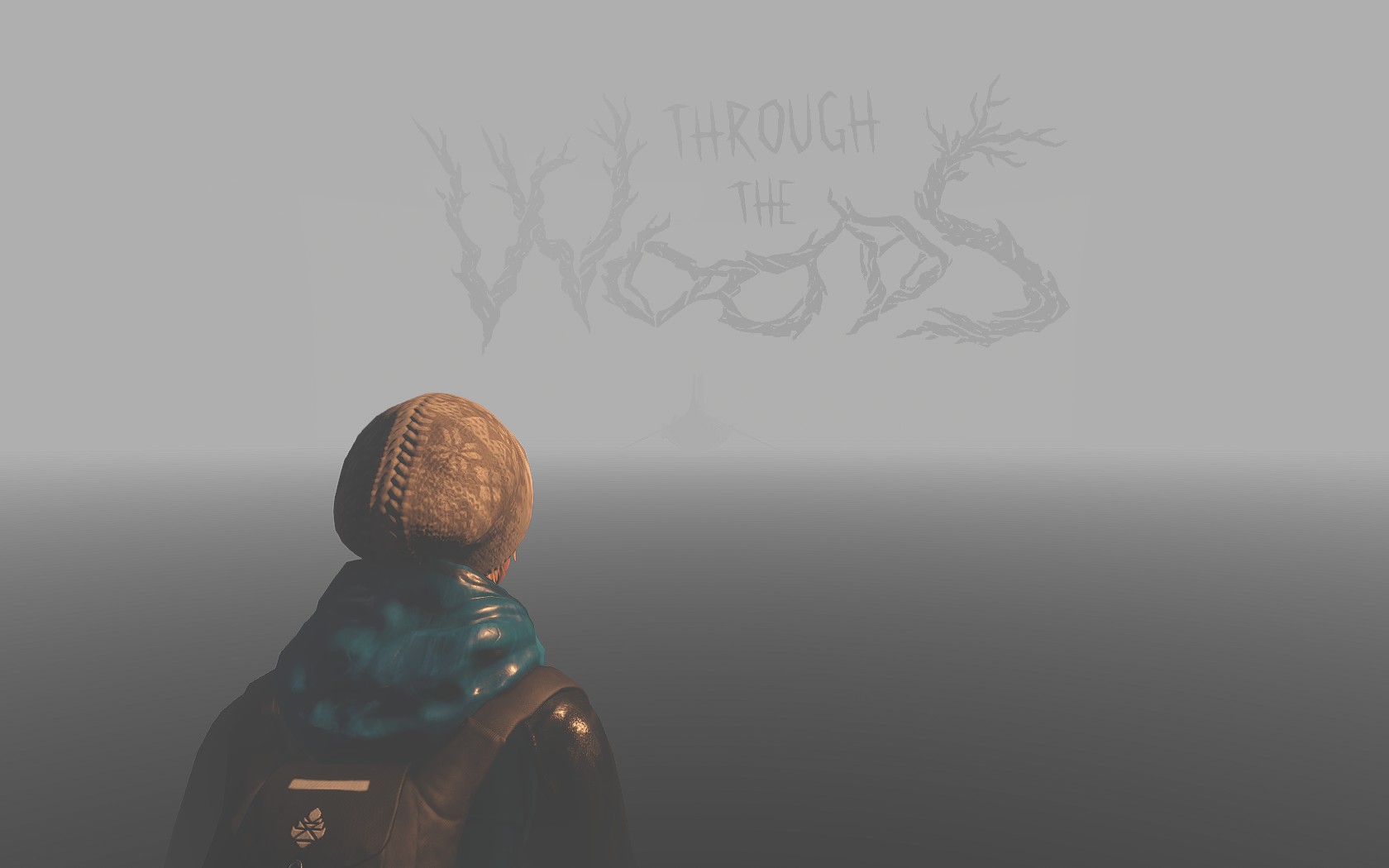 I often find myself excited for crowdfunded games, then let down when they either do not make it to release, or do not meet any of my expectations. Most fall into the latter category, bursting into the world with dated graphics, poor mechanics, and a complete lack of spirit. I’ve learned to temper my enthusiasm for crowdfunded games, but Through the Woods just put a big damn hole in the wall I’ve built. What began as a school project for fledgling developers blossomed into a game that holds its own against AAA titles, healing my belief that indie teams can make good on their crowdfunded promises.

Through the Woods does not give away its humble beginnings until the credits roll. It is a line among many, with no evidence from the game itself to ever hint at such origin. The graphics are absolutely stunning. Every creature is brought to life in astonishing detail, making even mountain trolls a joy to behold. There is water throughout the game, and I spent my entire second trip through the game wondering at how beautifully the team managed fluid movement and reflection. It seems like such a small thing, but water has only recently been perfected in console-backed releases. That a team of indie students could make water a central part of their game, and pull it off to a professional level, is worth praise. It is one small detail among many that make Through the Woods so enjoyable. 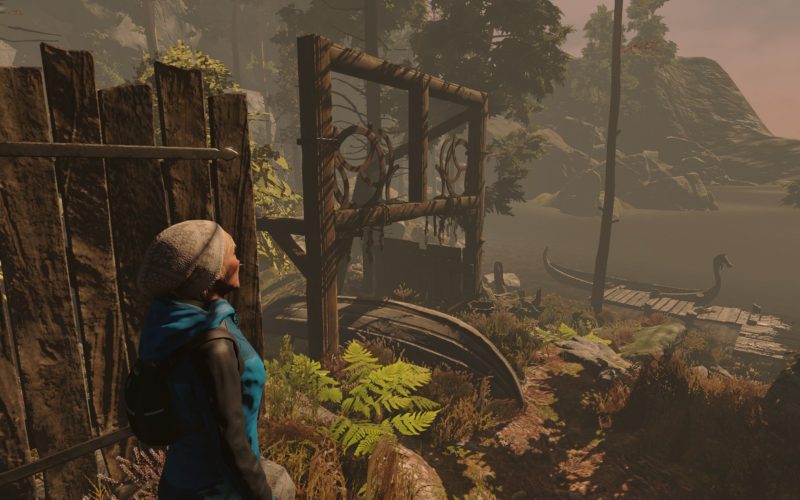 The team paid as much attention to sound design as graphics, adding a layer of detail to the story that indie developers often miss. Much of the story in Through the Woods is told through sound, from the warning footsteps of giant beasts to the whispered words of unseen children. Sounds alert you to the existence of those you cannot see or touch, creepily going about their business in time long gone, their ghosts left to haunt your headset. It is worth noting that the voice acting for all characters is wonderful. The game is recorded in English by Norwegian actors, and the choice to use the local dialect enhances the immersion of the story. The Norwegian music builds on the depth of the story as well, adding emotion to quiet moments. The soundtrack is devoid of synthesizers and heavy beats, opting instead for traditional string instruments and orchestral themes. I bought the soundtrack to listen to while relaxing and writing because it is so lovely.

The story of Through the Woods is fresh and fully fleshed-out. You play as a mother searching a lonely mountainside for her son. He has been taken up the mountain by a strange man, and there is no promise that he can be saved if you cannot reach him before sunrise. The premise of a parent searching for their lost child is common in horror, but from the moment you set off on your journey, the story of Through the Woods begins to twist. You quickly find yourself searching long-forgotten villages littered with journals that make mention of the bloody battle of Ragnarok. Not long after, you begin to encounter mythical creatures we are sure do not exist, guided by a heavily damaged moon. It is quickly apparent that you are no longer in your own world, and the stakes to find your son skyrocket. 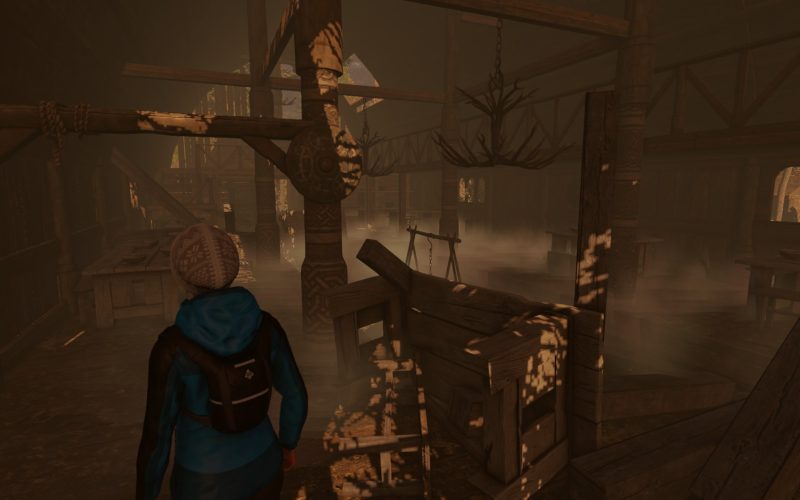 The story is excellently paced, offering new creatures to evade as you progress. It is also realistic in its expectations of a young mother, giving you no super strength with which to fight, nor weapons with which you may defend. Your only weapon in this wretched place is a clever mind, and that is unique to each player. Some players, more than others, may find that they do not appreciate the tenacity and cunning required of this game. It takes a lot of trial and error to learn how to handle each creature, and even that does not guarantee success. You will die a few times, and what works on one creature may simply attract the next. It is worth the effort, though, and each passing checkpoint feels like an accomplishment you can be happy with.

My main complaint about the game is the way it handles danger. When you first arrive in the other world, you can sense danger all around you, all of the time. By the second village, you know that you are completely safe when near houses, and that bright checkpoints and open spaces will mark the beginning of a dangerous zone. It is hard to maintain the tension in a game when danger is clearly marked, and it is just as difficult to encourage exploration when there is nothing to be found in dangerous areas. The stark division works against the game, and unintentionally kills a bit of the urgency. 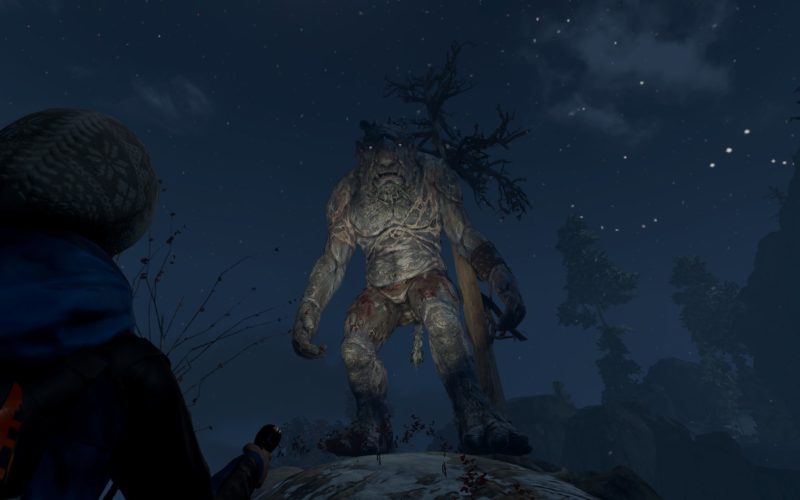 None of that is to say that I did not enjoy the villages – they are a treasure trove for explorers. Many different stories about the battles, creatures, characters, and area are scattered around the derelict homes, along with collectible items that bring dimension to the main storyline. There are a few remaining citizens left behind in the shared despair of lost children, and their stories will tug at your heart. Each village contains a warning about the next creature you will encounter, and gives subtle hints about avoiding them. None of the villages contain a map, which is a shame that adds about two deaths to each section past their gates.

The creatures in the game are fairly difficult to evade, partially because of their own behavior, and partially because every open area is a maze with no guidance. There is a candle here, a road sign there, but do not expect an indication of where you should go. It gets frustrating after the third death, when you realize you had gone in a complete circle or hit a dead end, but it is never so bothersome that I wanted to quit. For the most part, moving ever upwards and onward will get you to the right place. You’ll take a satyr to the face a few times in the process, but that’s part of the fun of the game. Along that vein, some of the dead ends contained a page or item to pick up, making the death after finding them seem worthwhile. 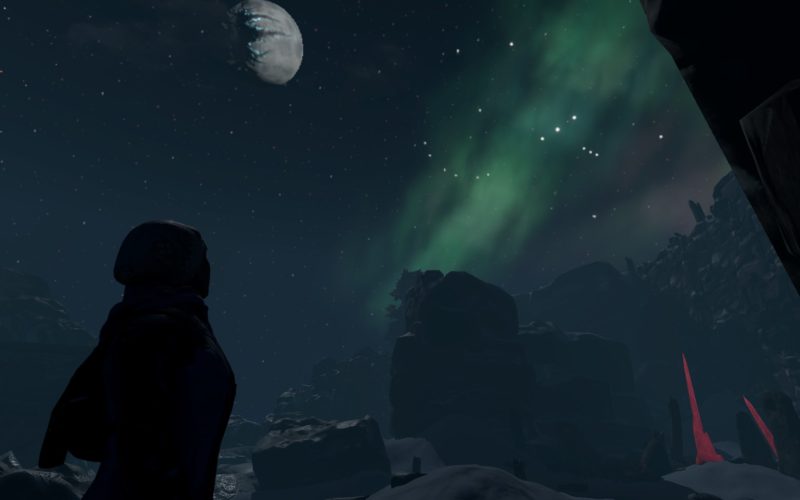 All of that brings us to the main character, and the two stories she must tell. The first, of her missing son, is straightforward for most of the game. The pages littered across the mountainside explain the reason he was taken, and what will happen at dawn. The second is told through memories, played off of recordings that slowly reveal a character completely different from the one you’ve known. To be human is to be complicated, but each recording unearths more secrets of a person whose journey seems more penance than tragedy. The other characters in Through the Woods are held to that same standard, showing complex personalities and facing difficult decisions with a stumbling sort of grace.

You will not guess the final twist in Through the Woods. Looking back after the credits roll, you can see the foreshadowing from the very beginning, but the story holds the secret until the big reveal. The smaller twists are stunning, too, and nearly sickening. I wanted to be angry at the main character by the end of the game, but she is so human, and so flawed that I can’t fault her development. Through the Woods is well written, and acted perfectly, and that carries the emotional weight of the story. I’m looking forward to seeing more from Antagonist. If they can maintain the quality of development and writing they produced with Through the Woods, they are going great places.