Review: This Book is a Dungeon - Rely on Horror

Review: This Book is a Dungeon 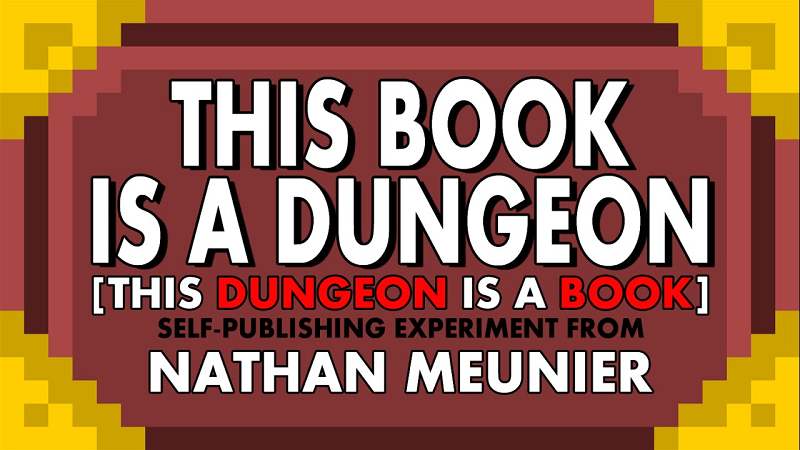 Man, you don’t find games like this every day. Even the title, This Book is a Dungeon, is a telltale sign that this indie game by author Nathan Meunier is a special little snowflake among the usual releases. An interactive novel that has your character enter a book is strange enough as it is, but throw in a healthy dose of cosmic horror and the whole thing begins to look weirdly appealing. It’s a shame it suffers from being terribly under-designed.

As stated in the intro, this game is an interactive story. The intro sets up a narrative in which you are a depressed individual who happens to find a mysterious book while returning home from a long day at an unfulfilling job. This setup is quickly forgotten when you are sucked into the book and find yourself in a mysterious dungeon, complete with a map on your HUD and an inventory screen right below it. It’s almost like a dungeon crawler from the mind of the world’s most disturbed Dungeons & Dragons Game Master.

The first dungeon helps familiarize you with the basics of gameplay. Text is displayed on the screen and certain parts of it are highlighted. You can click on the excerpts to perform an action related to the phrase, such as investigating a pile of bones when the description of a room mentions there are some bones there. You move around rooms by clicking on the directions given by your character and can track your progress through the dungeon on the map. Using these controls, you work your way through puzzles and avoid deadly monsters and obstacles. 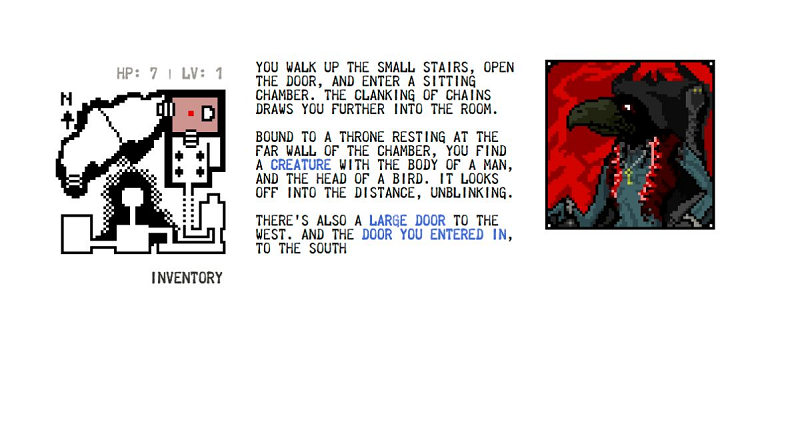 Each chapter features a neat little mystery for you to uncover, which starts with an ominous title you are shown at the start. After the first dungeon, Why the Walls Bleed, you arrive at a hub from which you can select the next story to tackle by interacting with 3 different paintings.

While each painting offers a vastly different story that addresses different kinds of fear, such as a bleak tale that plays with existentialism compared to another in which you are in a dark, creepy forest with Lovecraftian horrors in it, I lost interest pretty quickly. The tutorial level is actually the most complex level both in its layout and mystery, with all the worlds you enter from the hub being significantly shorter and more linear. The forest level you can finish in under two minutes without even trying and the other two are gimmicky experiments that love to kill you. While dying was fun in the tutorial stage, it becomes aggravating once you arrive at the paintings due to the lack of a save feature, forcing you to repeat long sections and entire chapters over and over again.

Oddly, the game lacks music and sound-effects entirely, leaving players in total silence as they click their way through the same chapter again and again. So, with no sound, no save feature, and only a few minutes of content, I find This Book is a Dungeon really lacking. If you find the concept of an interactive book interesting and don’t feel like going for any of the Japanese stuff that’s out on Steam, then I’d sooner recommend Vlad the Impaler or The Yawgh.