Review: The Walking Dead: A New Frontier – Episodes 1 and 2 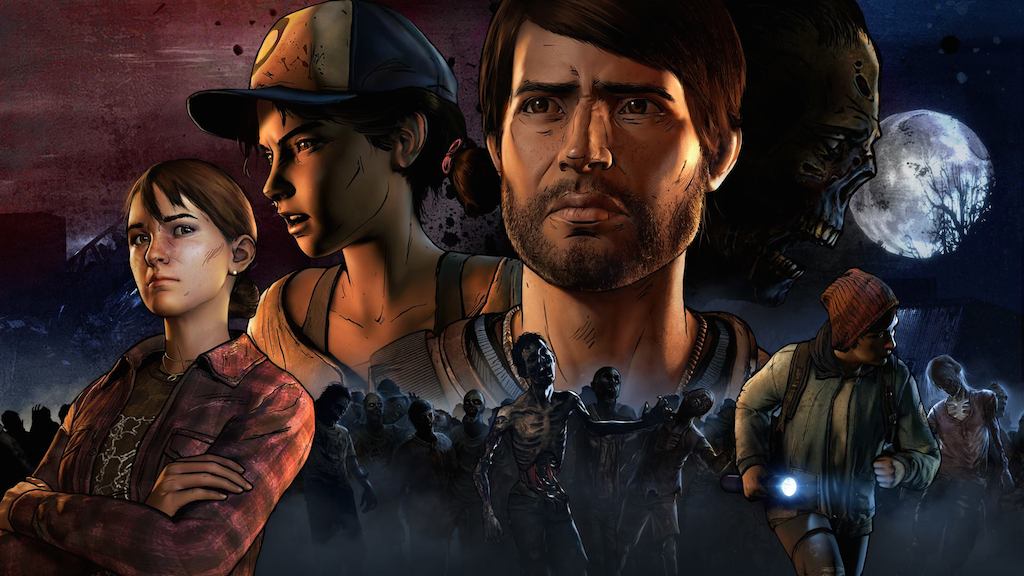 After a long wait, Telltale’s The Walking Dead is finally back with its third season. We’ve had a Michonne-centric miniseries to play in the interim, but now we’re finally reunited with Clementine. So, was it worth the wait? Keep reading to find out what I thought of the The Walking Dead: A New Frontier’s two-part season premiere!

Season 1 was all about playing the role of guardian to a little girl in a world where “children” is no longer a significant classification. Season 2 was about surviving in said world in the role of that very girl. Season 3 is about playing witness to the growth of a young woman who has had the world rip apart all traces of her childhood with its rotten limbs. That witness happens to be a compelling new character with his own engaging storyline. 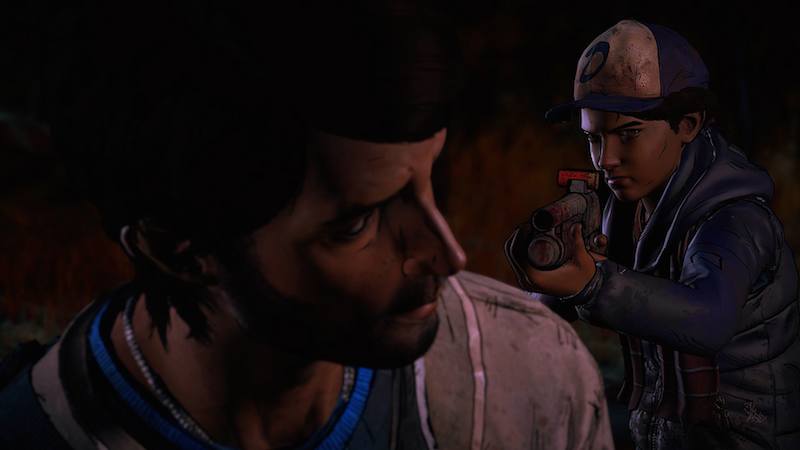 A New Frontier not only reacquaints longtime players with Clementine, now a young woman, but it also introduces them and newcomers alike to Javier Garcia as he, and we the players, witness what’s become of that former little girl. As important as Clementine is to the series, she’s not actually the main star of this new 5-episode season. The spotlight now shines on Javier. But don’t let that fool you into thinking Clementine isn’t important anymore. She’s still synonymous with this series, but now we’re actually witnessing the next chapter of her story behind a fresh face. Well, not so fresh a face, since the zombie apocalypse doesn’t really do wonders for one’s looks…

For four years, Javier has been fighting for survival alongside what’s left of his family: his brother’s ex-wife Kate, his nephew Gabe, and his niece Mariana. Together, they’ve been facing off against the shambling remnants of the world around them. A New Frontier starts by painting a portrait of family life, a portrait that starts to get stained by the hands of the dead rather quickly. We get to see the beginning of the outbreak through the eyes of Javier, as he rushes home only to find out that his father has passed away. This is The Walking Dead, though, so the act of “passing away” translates to a life literally being passed away to an undead state. This results in not only the absolute best intro scene in the series to date, but also one of the finest I’ve seen in recent zombie games. 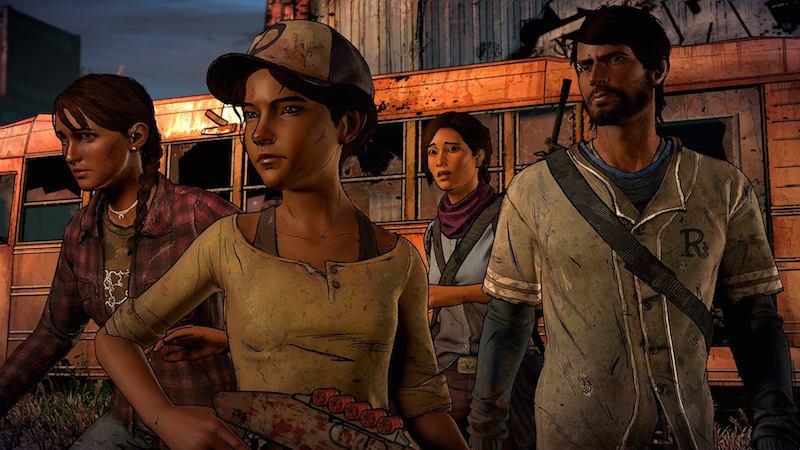 One of the biggest improvements Telltale has made this season is with their cinematography, and that factors largely into why the premiere’s intro is so effective and visually similar to a short horror film in and of itself. While it’s the most linear portion of the entire premiere, the intro still manages to sink its teeth into you as it reintroduces/introduces the game’s key mechanics in a logical manner. An unnerving sensation crawls over you while you witness a family falling victim to the horrors plaguing the walls outside their once-not-so-peaceful home. That’s another thing this season premiere succeeds at: portraying a realistic type of family life and all the troubles that come with it.

Even before the outbreak started, Javier’s family was being slowly ripped apart by the jaws of conflict. That’s normal for any family. Not everything can be all smiles and laughs between family members all the time. Telltale portrays that excellently here, and I even found it quite relatable to my own family. Family – you might see that word pop up a lot throughout my reviews this season, but that’s truly the central theme of this season thus far. And it’s what shapes Javier into a likable and engaging protagonist that you can shape and mold with your decisions and actions. 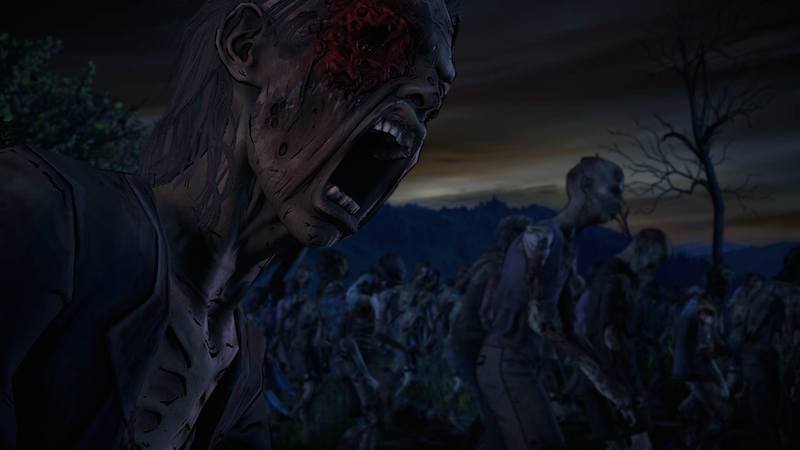 While decision-making is still the spine of the game, along with its point-and-click bones, actions have also been greatly improved, along with movement itself. You can now walk faster while exploring (by holding down R2 on PS4), which definitely helps when you’re in an area with lots of stuff and things to investigate and interact with, like during the supply run in the beginning of the first episode. Interactive objects and points of interest are also better implemented into the environment, and the whole interface just feels way more intuitive than previous seasons (and even previous Telltale games).

Gunplay and quick-time events in general also feel way more engaging. The button prompts have been embedded more naturally into the on-screen action, resulting in more seamless combat scenarios that keep their jaws hooked in you like the muertos you’re trying to fend off. Muertos – that’s Spanish for “zombies,” and what Javier and his family call them in the game. (You learn something new every day!) We’re only two episodes in, but we already have a handful of memorable combat-heavy moments that stand tall with some of the series’ best.

It might still be too early to say this definitively, but it seems like decision-making will actually be way more crucial this season than it ever has been before. Throughout both episodes, I was faced with moments where I seriously had to pause the game and step away for a few minutes, so I could process situations and decide what I would do/say next. It was tough. I told myself I wouldn’t retry checkpoints, I would just go with what I felt was right by answering the question: What Would Javier Do?

And speaking of WWJD… A New Frontier also features Jesus (from the comics/TV show), and he makes his debut in the second episode of this two-part premiere. I won’t spoil his exact role, but he’s good ol’ Jesus as we know him from the comics, complete with his fancy martial arts repertoire. It’s great to see another face from the source material make the jump here, and I’m definitely crossing my fingers for the possibility of seeing a couple more. But, of course, at the heart of it all lies Clementine. 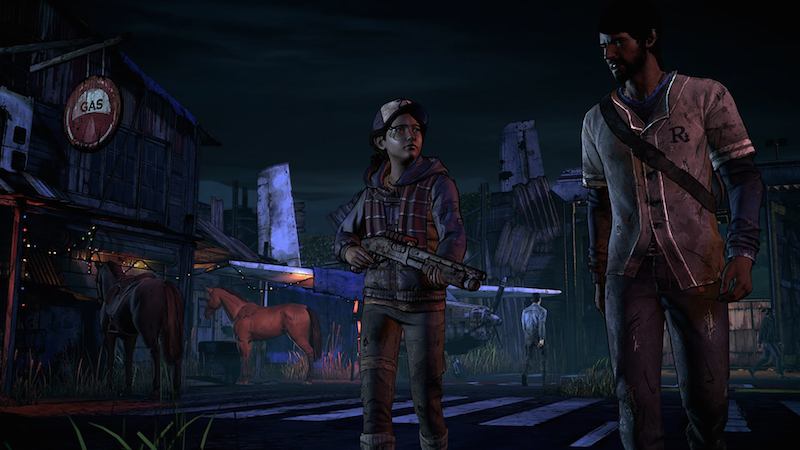 Let’s see… Where should I begin when talking about Clementine and her role this season? I won’t spoil anything, but I will say that you do get closure in terms of the dangling threads left from season 2’s finale. I had kept Kenny with me, along with baby AJ, and decided to stay together after being refused entry to Wellington as a group. The first episode of this new season had a flashback that continued my personal ending from season 2. Episode 2 had another flashback with even heavier ties to the events going on in the present-day storyline involving the titular group we’re dealing with now. While I like this approach to continuing Clementine’s story, I do wish we could play as her outside of flashbacks. That was one minor disappointment. Now on to one more.

A New Frontier’s two-part premiere was pretty brief, even with its story “Ties that Bind” being told across two episodes. To me, it felt like it lasted merely a bit longer than a single episode from season 1 or 2 – around two and a half hours. This probably explains why Telltale decided to pair these two episodes together and release them on the same day. Despite its brevity, though, Telltale succeeded in making us care for Javier and his remaining family, while further adding more layers to Clementine’s character. And that was key right there: making players care for a brand new character while still giving ample amount of screentime to the series’ favorite.

The Walking Dead: A New Frontier is off to an amazing start. It not only pushes the series forward with a fresh cast of characters, but it also continues to show the growth of a young woman who’s been growing up in a world where “childhood” holds as much weight as the empty graves of the walking dead.