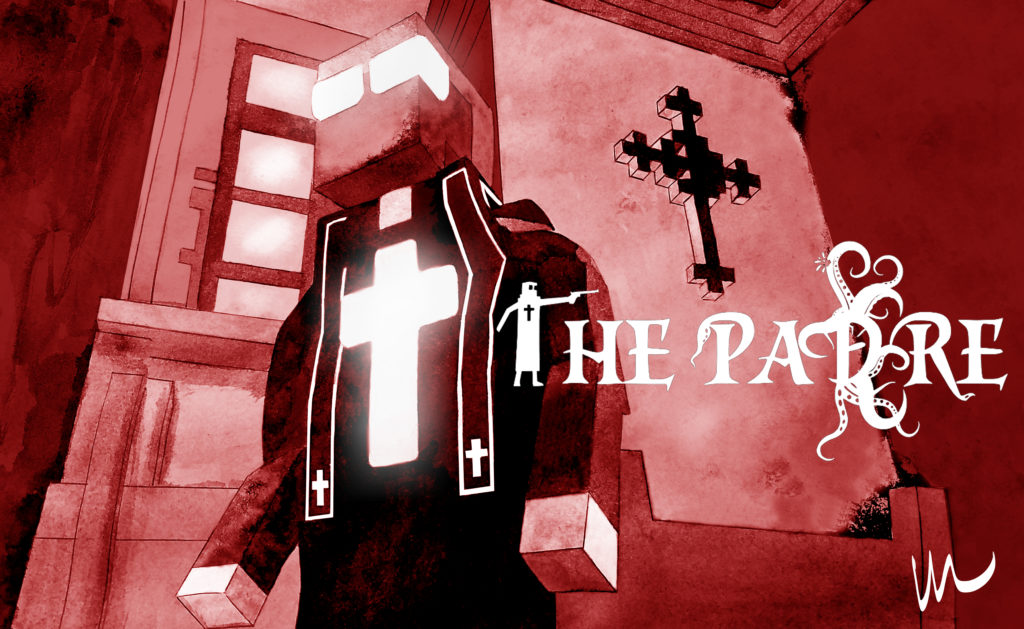 Developed by Shotgun with Glitters and published by Feardemic, The Padre is a voxel-style retro 3D horror-adventure title that harkens back to the golden days of the original Alone in the Dark and Resident Evil. You play as Father Alexander, the titular priest on the hunt for a missing cardinal. Seeking shelter from a thunderstorm, he stops for respite inside a nearby mansion. His journey to find the missing Cardinal Benedictus, whom he is not on good terms with, has led him to this spooky estate. He soon finds out that the grounds are not as empty as he thought and forces from the beyond have conspired to bring him to this place.

The game is a combination of traditional adventure game elements mixed with some light combat. Gameplay is simple and intuitive. You control Father Alexander by clicking in the direction you want to go, exploring the mansion from room to room searching for notes, items, and anything else that can aid you in your search for Benedictus. The movement and general puzzle style remind me of a mix between Grim Fandango and Alone in the Dark. Items you pick up are stored in an easy to access dropdown inventory tab. Thankfully the game doesn’t confuse you with a million places to try a certain item. A streamlined inventory system means that if you’ve selected the appropriate item for a given puzzle, it will show up on your cursor, indicating that it can be used. For the most part, puzzles are intuitive, but sometimes the logic behind them can be a little vague and you’re left guessing what the developers want you to do. I never got too stuck on a puzzle and the game provides a built-in hint system, which you can toggle on and off as needed. 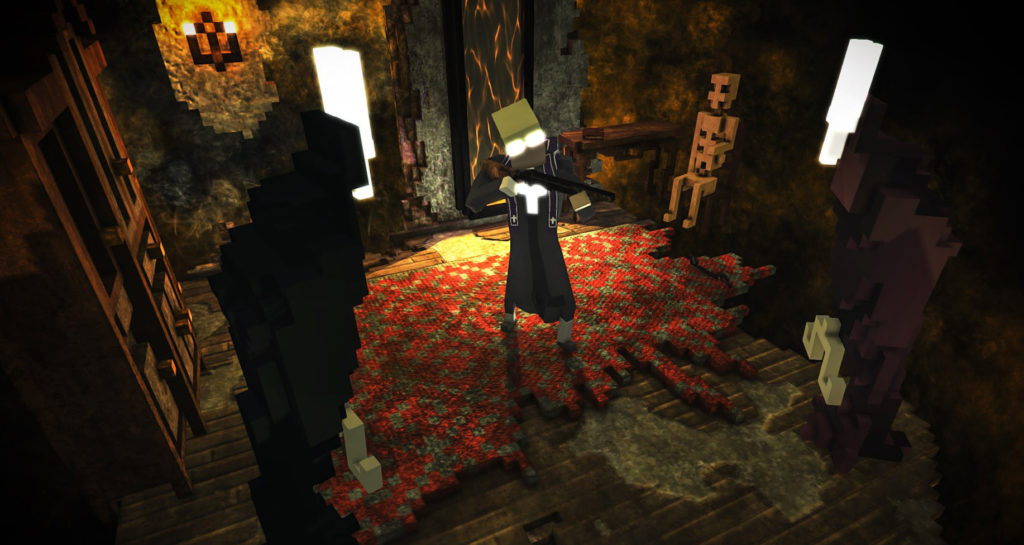 In his fight against the forces of darkness, Father Alexander is equipped with a variety of both close and long-range weapons, including a crowbar, pistol, rifle and crossbow. Like the look of the game, combat is rudimentary but effective. Hover over an enemy with the cursor, build up your swing/aim meter and click away. You also have the ability to defensively block incoming attacks by holding down the right mouse button in combat mode. The intensity of the glowing cross on your chest is a clever indicator of your health. It will slowly fade and flicker as your life-force grows weaker. Enemies are varied and require proper timing and precision to dispatch effectively.

Clunky controls ride that delicate line between feeling pleasantly retro and genuinely frustrating at times. For example, when initiating a transition animation, like opening a door or climbing a ladder, enemies can still get in a couple of cheap shots, even though you no longer have control. It’s not a big gripe, but it’s something I encountered a handful of times and found annoying. Camera placement can also be an issue.  You can rotate the camera around to switch views, but important items can still get hidden in a scene. Even though I enjoy the blocky graphical aesthetic of the game, it can still be hard to make certain things out.

Permadeath is a real threat in The Padre. After each death, you’re transported to an otherworldly hub where you can choose which of the most recent areas to restart from. There is a price for this resurrection, however. Every time you die, a glass vial slowly fills up with ‘angel tears.’ Once the vial is full, it’s game over and you’ll have to start completely over. This is a good incentive to make every shot count and avoid enemies whenever possible. The good news is that since a lot of your time will be spent on puzzles, once you know the solutions, you can easily retrace your steps. 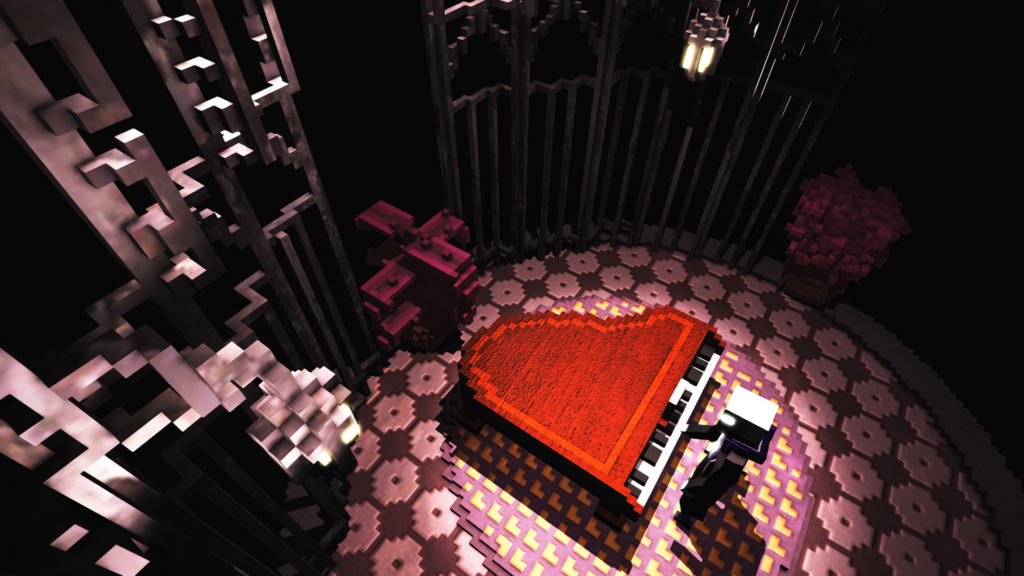 The tone of The Padre alternates between the sober and moody ambience of the dark, demon-filled mansion, and the gruff, sardonic personality of Father Alexander. He regularly provides sarcastic comments about his surroundings and the increasingly ridiculous situations he continues to find himself in. His performance is low-key and dry and his voice sounds a little like Stellan Skarsgård. Every now and again he will also slip into more devout and angry moods, giving the character a bit more of dimension than I was initially expecting. Half the fun of the game for me was anticipating what kooky, off-color thing he was going to say next. Both the performances and the moody soundtrack of the game perfectly complement the atmosphere. Music is alternately simple and ambient in its quieter moments and percussive and bombastic when it needs to inspire terror and panic.

The game’s unique voxel art style is something I haven’t quite seen done like this before and creates its own unique abstract aesthetic which invites players to fill in the details of the characters and environments. The effect is very similar to PS1-era graphics, which were good enough to accurately depict what they needed to, but also abstract enough to let players’ imaginations fill in the rest. I loved the way everything looked and felt. The indie game space is the perfect place to experiment with innovative styles like this and I was very impressed by the level of detail and interaction in the environments. The developers took real pains to make this fun little pixel mansion feel like a real place. It’s a nice reminder that not everything has to be photorealistic to be effective and there will always be a place for alternate, stylized art styles like this. 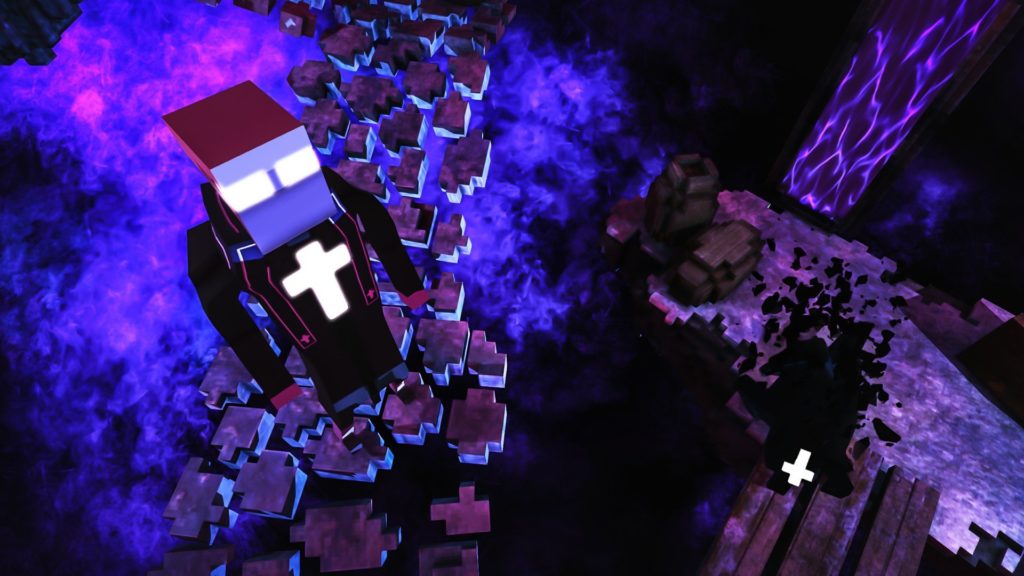 As is the case with the majority of indie titles, The Padre is a little rough around the edges in some spots. Although control and combat can be frustrating at times, and the game ends rather abruptly, it’s still a fun ride. The game’s unique art style and combination of horror and humor make it well worth the journey, and Father Alexander is a compelling character to inhabit. I would recommend it to anyone looking for old school horror-adventure thrills with a wry sense of humor on the side.

The Padre is available now on PC, PS4, Xbox One and Nintendo Switch.