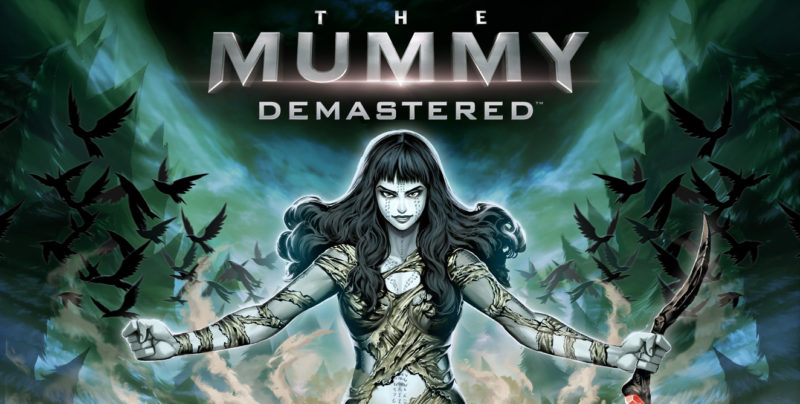 It’s been an interesting decade for Hollywood. Ever since Marvel Studios cracked the code on how to successfully create a shared universe between multiple films, other studios have been trying to jump on that bandwagon. The results have been … well, honestly, Marvel is the only one that has managed any real success so far. That hasn’t stopped a bunch of others from trying to create shared universes even when they don’t really make sense. Sony Pictures’ bizarre plans for a shared Ghostbusters universe, the impending King Kong/Godzilla thing Legendary has been trying to put into effect for years, etc. Only one other potential movie universe has stood out to me as a no-brainer.

What Universal Studios has chosen to call the “Dark Universe” was one of the first things I thought of when all this started going down. The Universal Monsters were more or less the original shared universe, albeit mainly because they’d end up teaming up against Abbot and Costello. Unfortunately, like so many other attempts, the Dark Universe appears to be floundering on the rim of the drain after two outings crashed and burned — 2014’s miserable Dracula Untold and this year’s even worse The Mummy starring Tom Cruise. But that doesn’t mean it’s all bad, right? Amazingly, despite loud, vocal distaste for Universal’s new series of films, the tie-in game to this year’s reboot of The Mummy is … amazing. It’s shockingly amazing, actually. 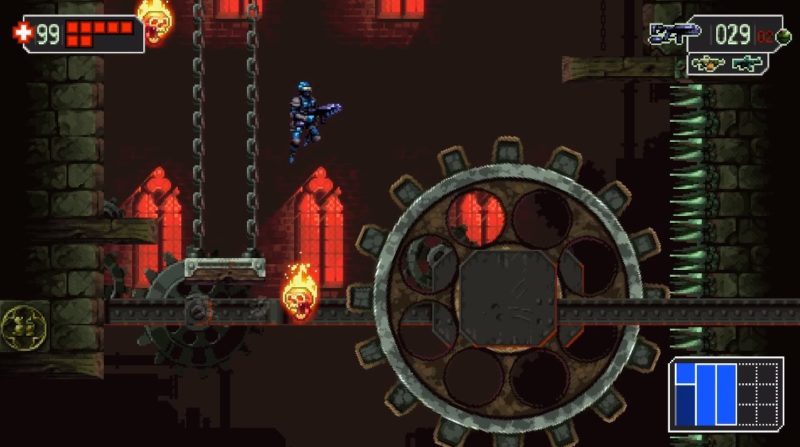 Developed by Wayforward, The Mummy Demastered is a retro-styled Metroidvania romp that has quickly become my new addiction. It’s instantly recognizable and easy to pick up and play for fans of the sub-genre, combining aspects of all of the best examples from the last few decades. Specifically, it combines the stylings and vibe of 2011’s excellent Aliens: Infestation for Nintendo DS, with the more modern death driven mechanics of From Software’s Dark Souls and Bloodborne. Oh, and Wayforward tops it off with some out-of-this-world good music. But I’m getting a little ahead of myself here.

We play as a soldier of the Prodigium Organization, a special task force set on ridding the world of gods and monsters. We’re tasked with hunting down the reincarnated Princess Ahmanet, a living Mummy who will bring about the end of the world. This will lead us to delve deep into the darkest of crypts, through subterranean caves, and visit even more macabre locales on our mission. The story kind of ends there, as it’s treated more as a frame to push our monster killing action forward, and give us what we’re actually here for — which is, of course, the gameplay itself. The game features classic Contra-esque shooting mixed with Metroidvania level design, with the aforementioned Souls/Borne influence that keeps exploration rewarding but death a potentially enormous setback. 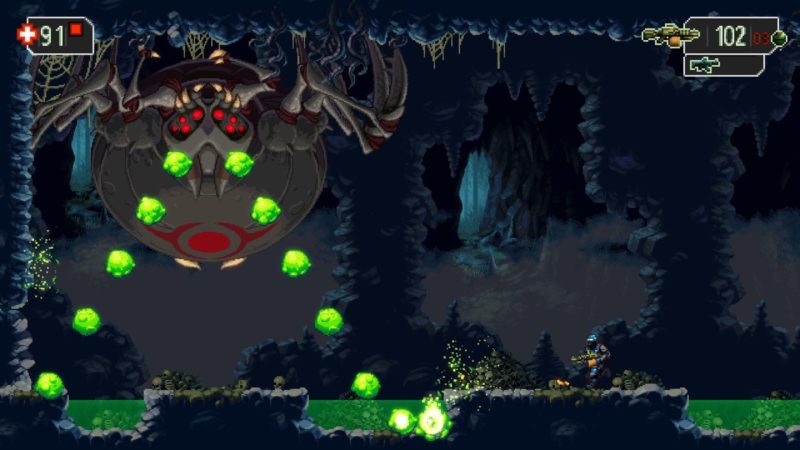 While combating monstrous bats, rotting mummies, nightmarish rats, and insane bosses, we also have to deal with the consequences of our player character’s death. When killed, the soldier initially controlled is reanimated into a super-powerful zombie, complete with all the weapons and upgrades you managed to get a hold of before death. When “respawned” as an entirely new soldier, we’re forced to seek out and kill the aforementioned reanimated corpse to get our stuff back. If we die while attempting that, it adds another zombie we have to deal with on top of the original. This becomes insanely challenging if you die multiple times, but the siren call of them sweet upgrades is too good to ignore. Don’t worry; items never completely get lost to the ether the way Blood Echoes or Souls would in the From Software games, but attempting to proceed without them courts more challenging scenarios as you explore further.

Shooting feels tight and platforming is solid, with a character lock action that plants your feet in place and gives you eight directions to shoot in. None of the enemies feel like they take too long to kill, and switching your starting infinite ammo rifle out for more powerful (but ammo-limited) pick-up weapons or grenades feels rewarding as hell. A sweet arsenal doesn’t mean that combat is easy, though. Fighting most foes requires quick thinking and using varying planes of height to your advantage. From dodging projectiles, rolling out of the way of explosions, or hopping between platforms to fill your target with ammo, each enemy type presents its own challenge. Getting too cocky or not taking the time to readjust your strategies will result in substantial damage. 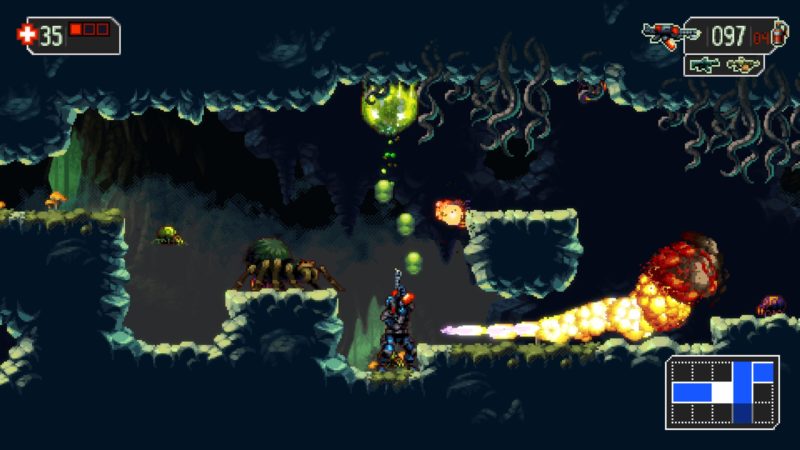 Healing isn’t easy either, as you don’t carry health items with you; you must pick up health tokens from fallen foes or from inside destructible objects. These items don’t provide much recovery either, healing between 5 and 10 points of health apiece. You can level up your maximum health, which essentially grants you multiple health “bars.” Health is displayed as a maximum number value of 99, which rolls over to the next “bar” of 99 upon depletion until you run out of health “bars” entirely. Here stems my one negative point about this game — it’s a bit of a big one.

As I said, upon death, you’ll have to hunt down your zombie and kill them to get your stuff back. Unfortunately, while you will pick up all of your ammo and health upgrades, they will not be at 100%. I understand the reasoning behind this, of course, but it leads to a rather fatiguing grind in certain situations, especially against bosses. There was a period where I was stuck for quite a while because a boss (a giant lizard monster who shoots fireballs) would kill me, and I’d “respawn” at the last save point, directly next to the entrance to the boss’ area. It wasn’t a big deal to get my equipment again, but without being given 100% full ammo and health, I would need to farm to fill them up again completely. This could take upwards of five or ten minutes just so I could get ready for the boss fight again because of how small the health and ammo drops are.

It might be to the game’s benefit to consider implementing a full recharge of your health and ammo upon saving, or perhaps upon killing your zombie. As it is, the grind for health and ammo (especially when I’m right next to the next boss fight) is tedious and frustrating. It gives death an odd weight that feels less in line with the challenge of Souls/Born‘s leveling up system and more along the lines of retro game design padding. It isn’t challenging; it’s just tedious. It’s a flaw in the game’s design that I’m afraid brings it down a peg, as I otherwise adore this game and hope it gets the love and attention it deserves. The Mummy Demastered is honestly right up there with Yacht Club Games’ Shovel Knight for me. 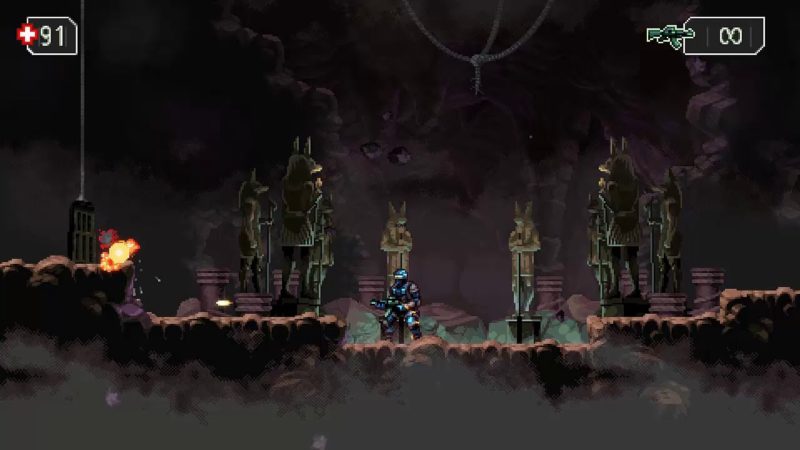 On a more positive note, I need to take some time to gush about the music. 80s synthwave is making a wonderfully delicious comeback these days, and The Mummy Demastered nails the best of the genre to a T. Every track drips with intrigue and adventure that kept me going if for nothing else than to just hear what the next area sounds like. I might just be biased towards this genre of music, but oh my god, friends. I’m so glad the soundtrack is available to download, and that I don’t have to hunt down fan rips, because the composer, Monomer, deserves the support. I think I have my writing/reviewing/working music set for the next … forever.

If you like Metroidvania games, The Mummy Demastered is not one to miss. Barring its one hiccup in regards to the grind mentioned above, this game is a modern treasure within the genre, and the fact that it came out of a movie-licensed deal is even more incredible. Do yourself a solid and pick this one up; it deserves your $20.

Nintendo Switch Review code was provided by the developer. The game is Available on Xbox One, PlayStation 4, and Steam