Review: The Lady - Rely on Horror 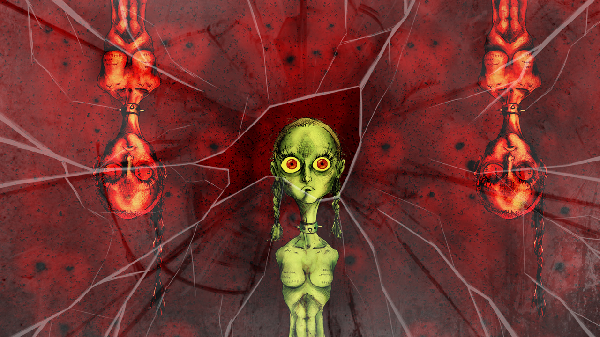 I have been sitting here staring at a white Microsoft Word page for about an hour because I couldn’t for the life of me come up with a way to start this review. The Lady is a game that is so infuriatingly vague and artsy that I had a hard time coming up with words that can describe what it’s like while also expressing my thoughts about it. It feels like a game that wasn’t designed for an audience, like it was never meant to entertain or enthrall a real person. Allow me to tell you why:

The game starts off without establishing any kind of goal or story and simply shows you the controls. You find yourself controlling an armless, sickly-looking woman that appears completely nude; the background consists of a dark green color and the foreground looks like a smashed window through which you view the game. All you can do is move left and right with the A and D buttons while firing a projectile that resembles the character’s face with the arrow keys and your only obstacles are the shards of glass that randomly fall from the sky.

The game’s Greenlight page states that it’s a puzzle game about overcoming anxiety, but there is nothing in this game I would describe as a puzzle. What you’re supposed to do is mess around the level until you stumble upon the sequence of actions that the developer(s) wanted you to perform without any sort of hint stating what that might be. In this first level, the goal is to move to either end of the screen, then all the way to the other, and then walk back once more until you run into the randomly spawning door. In a later stage the objective would be to stand still until an enemy appears, kill it and ignore the door that spawns and then wait for the second enemy and kill it as well. Again, this was completely unprompted and if I did anything else it would simply put me back a few stages and force me to retry. While doing this you are usually harassed by the falling glass, though later on some basic foes appear to hamper your progress as well.

Suffice it to say, this gameplay bored me within minutes because there was no sense of achievement after finding out what I had to do. Most of the time my experimentation consisted of simply moving back and forth across the stage, killing whatever came across my path and interacting with any prop that spawned, which more often than not made the screen shake for a bit before putting me back to the start of the area. I didn’t feel like I was partaking in a puzzle that was designed to test my mental capabilities, but rather like I was supposed to derive some kind of symbolism from the experience.

This idea is further supported by the visual design, which is notably morbid and made for a good, initial scare, but grows dull very fast. Practically everything you fight or meet resembles your ugly character and that is supposed to resemble a battle against anxiety. The backgrounds and scenarios grow increasingly more surreal as the game goes on, but none of it felt very coherent to me. Here’s the thing: I really like games that have some kind of theme or message, but those only work when the core experience is interesting as well, see the Persona or Cave Story franchises for popular examples. Lacking any sort of engagement means most players aren’t going to play for long enough or care for whatever you had to say. 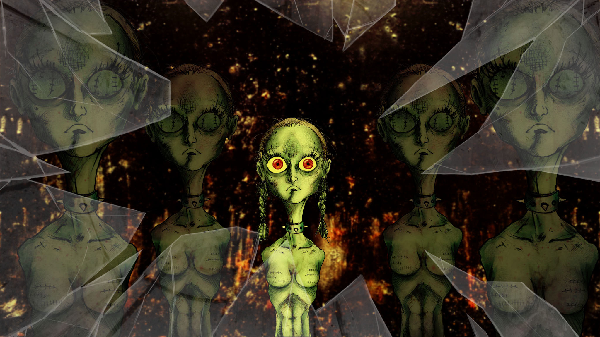 It also has to be said that the art-design is fairly horrible; one level involved thorns that were shown to damage the player-character, but a later boss-fight incorporates thorns as well, but those are completely harmless. The size of the enemies also appeared to be completely irrelevant to how much damage they can take (even the screen-filling badies die in one hit) and the projectiles you fire lose their effect long before their animation indicates. Combine that with controls that feel unresponsive, slow and can occasionally get stuck, and you make the already barebones gameplay section even less appealing. I will admit, though, that some of the later backgrounds looked pretty freaky and it was clever how the sound-design gradually became louder and louder as the end drew near.

I think it’s worth noting that a few days after receiving a review copy, I was also sent an email containing a full playthrough because most people couldn’t figure it out, which also stated the game deliberately evoked the difficulty of the NES and SNES days. Whereas I can see the appeal in that when talking about 2D action games or platformers, I don’t really see the similarity between this game and classic puzzle games like Marble Madness, Lemmings or the countless Tetris variants that I fondly recall from that era. Despite of the claims made in the mail, there is nothing “challenging” about this game, it just tests if I have enough patience to mess around the level for long enough to trigger the right events while coping with shamefully poor gameplay.

If you’re in the market for cheap, independently-developed puzzle games with interesting messages to it, then I would like to recommend either Paper’s Please or The Swapper, but The Lady is definitely a game you’ll want to avoid.