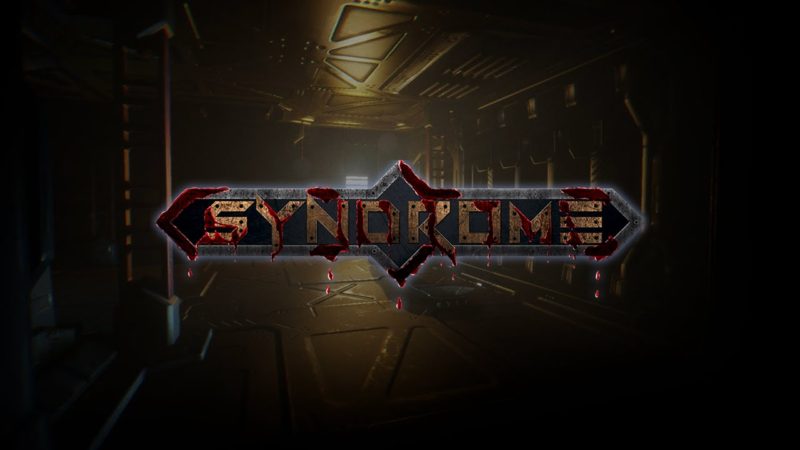 It is a complete coincidence that I wound up reviewing two sci-fi space survival horror games back to back. It is even more of a coincidence that both of these games are directly inspired by Alien: Isolation. While I do wish horror would step away from the constant rehashes of Slender, P.T., and Alien: Isolation, I still enjoy when one of these tributes is made competently. Syndrome might be walking a mile in someone else’s space shoes, but it wears them well.

The story of Syndrome is a retread from other popular games. You awaken on a spaceship where something has gone horribly wrong and the crew is dead. Using your wits and the remaining supplies on the ship, you need to discover what went down and get out alive. While there is an unexpected twist at the end, the majority of the storyline is pretty standard. Syndrome blends psychological aspects with old school survival horror, pitting you against aliens and machines as you experience gruesome delusions and uncover log after log detailing the crew slowly losing their minds. While the path this story meanders down is well-worn, it works for a game interested in blending a few fan favorites together to create a fresh mission.

Syndrome starts out with a great cutscene, panning towards a massive ship while explaining that you’re being woken from cryogenesis. The cutscene eases you into the first moments of the game, which are thankfully devoid of blaring alarms and flashing lights. There isn’t a tutorial stage to interrupt the opening gameplay, so you actually get to wake up and wander around figuring out how things work in a way that feels natural. You and your character are both confused and disoriented, enhancing the suspension of disbelief. 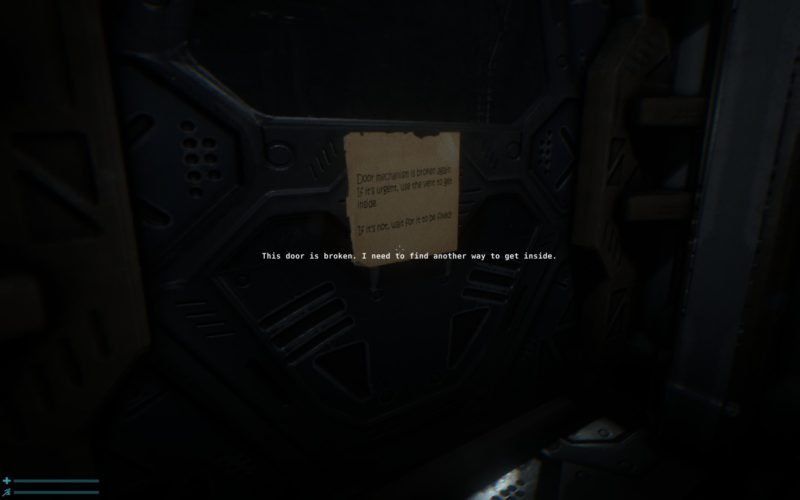 Syndrome makes use of great graphics and good lighting choices. The sound is well done, if a bit standard for spaceship fare. The controls are natural, using WASD with strafing, sprinting, and crouch functions. I didn’t run into any issues with the graphics, though I did think I had at one point. As I progressed, I realized that what looked like graphics anomalies were intentional, and it added to the charm of the game. My only real complaint on a technical level is a particularly finicky one: The notes left on doors in this ship look goofy as hell. It’s the font. None of the grown men on the space version of an aircraft carrier would have chosen this font.

Aside from that, it is all good. Your only metrics to keep an eye on are health and sprint, with a sprint length that allows you to get ahead without effectively making you a marathoner. Health injection pens and food are scattered around the ship, allowing you to top up your health from the inventory or recover from near death with the push of a button. I do wish the health kit function required holding H for a couple of seconds so that I couldn’t accidentally waste an injection, but I can’t expect developers to cover for sloppy users. There are enough of these pens lying around that the misuse was a simple “ah, crap”, instead of a reload to last save. Don’t waste them on small recoveries, but don’t freak if you accidentally lose one to exploring controls. 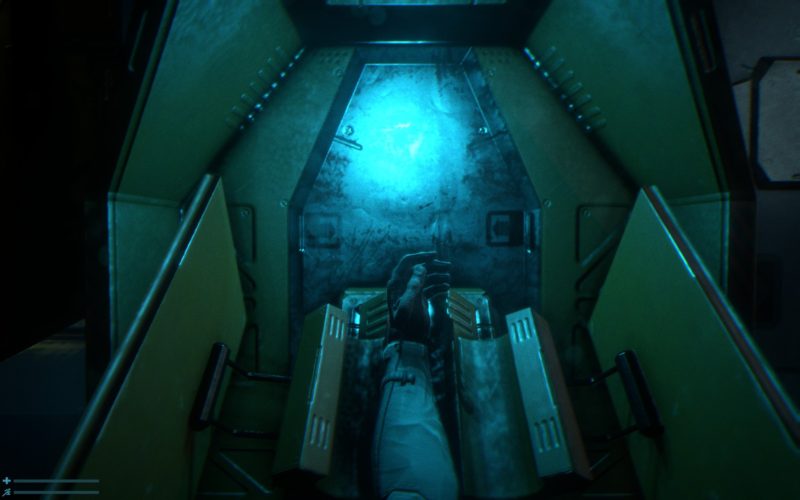 Saving the game is done via control panels on the wall where you insert your arm, and these are plentiful in every level of the ship. There is no checkpoint system, which makes the game even more of a retro treat for older players who remember the early days of survival horror. Players can save as often or infrequently as they desire, and the extra points actually made me less likely to save because I felt like I was never too far to run over and save again if I needed it. The mechanism for saving is a bit weird, in a memorable way. While I cannot say I would normally go sticking my arm into terrifying large machines to see what they do, this game makes it work.

Syndrome spends a long time allowing players to get a feel for the controls and the ship. While you encounter enemies in your first hour of gameplay, you won’t experience combat before that mark. That first hour is misleading. You have time to get familiar with the layout, learn a little about what happened on the ship, and form a fragile alliance via your personal communications device. You wander halls devoid of life, but littered with bodies. You crawl through a few vents, open a few doors, and scout out save points. The game feels almost too slow in its setup, and then pounces after lulling you into a false sense of security. 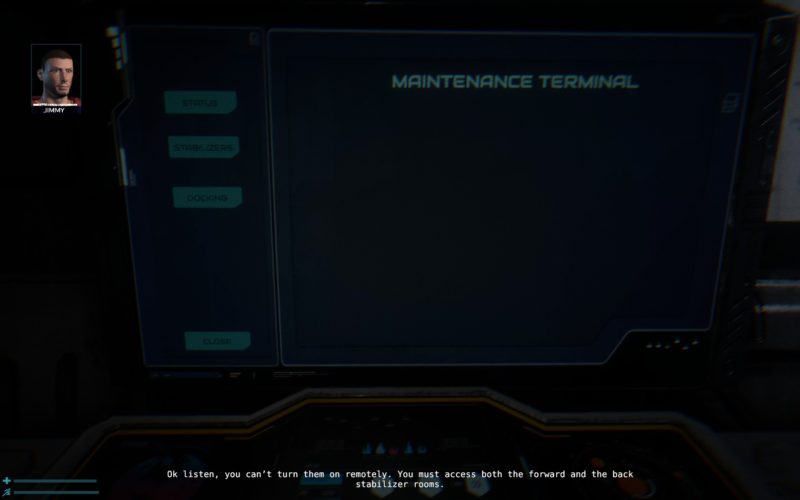 I am happy to say that the developer nailed combat, an uncommon accomplishment for recent survival horror games. You are not overpowered, nor are you completely incapable of defending yourself. You have enough health to take a few hits, but not so much that you can rush headlong into fights. You have the ability to use stealth to avoid fights, sprint to escape them, and weapons when those options fail. You are given a melee weapon early in the game, a yardstick of a wrench that deals heavy blows and blocks attacks. Later you get a few firearms, but ammo is scarce. Loading screen tips warn you to save bullets for big enemies, and you should take that hint. Save your guns, and take some stress out on enemies’ faces instead.

The enemies in Syndrome are well-built. You can take the most common of them down with a few good hits, avoid their attacks with a well-timed block, or attempt to run and hide if you’re losing the fight. This equally-matched build makes combat enjoyable and feasible, allowing players to take risks in exploring that overpowered enemies would discourage. There are some enemies you won’t want to meet in a fistfight, but there are interesting ways to stealth around them, or take them on if you saved your ammunition. You also won’t want to stick around to duke it out with enemies in packs, since you can’t effectively block attacks from multiple angles and get a hit in edgewise. Sometimes, running away is the second best option, after not getting into a fight in the first place. 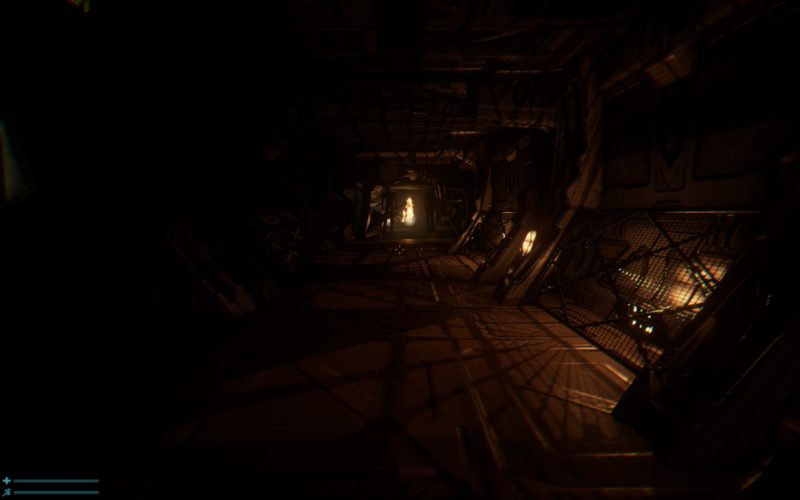 I suggest players leave themselves stamina to sprint away from a fight, and try to walk instead of run when exploring. When stealthily sneaking about the corridors, it makes much less noise. It also means that you won’t run around a corner with the last of your stamina and find yourself in a sticky situation with a new friend. You don’t have to worry too much about combative enemies sneaking up on you, though. There is a particular static sound that rises in volume as you approach enemies. As long as you’re paying attention, you’ll know when you’ve got unwelcome company. You can exploit the sprint meter in the usual manner, cycling through running and walking so you never quite get exhausted. This comes in handy, as does stockpiling food for when you’ve taken less than three hits as you jog past enemies in the corridors.

The halls of the ship are by turns crowded and completely empty, with enemies roaming the ship as intelligent beings trapped on a spaceship would. This inability to rely on safe spaces or predict enemy encounters keeps suspense high throughout the game. The developers do a good job of building tension with slow enemy introduction and narrow escapes, making every enemy encounter memorable. The enemies are introduced alongside the story, creating real anxiety and building tension as you go deeper into the bowels of the ship. There are a few intuitive puzzles here, but you don’t have a lot of uninterrupted time to complete them. You’ll have a handheld device that allows you to hack into systems around the ship and override security settings, but those areas usually have you mingling with bystanders who aren’t too happy to see you. It’s best that they don’t, so get what you need and get out. 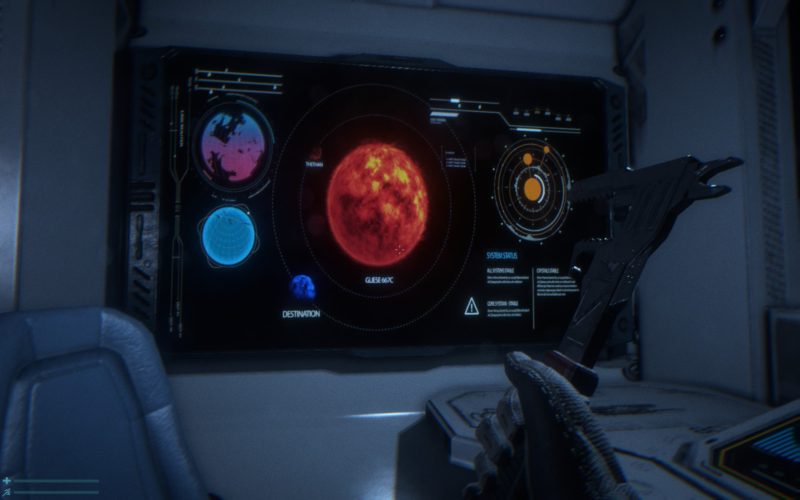 The story is simple but good, and progresses at a nice pace after that first moment of combat. The logs you find around the ship are a reasonable length, and interesting enough to merit reading. The silence and sounds of a deteriorating ship are punctuated with dialogue as your source on the outside communicates objectives, warnings, and new information to you via the comm system. The story is solid, and benefits from not being spread too thin. You backtrack through the levels in the ship several times to complete objectives, but new pathways, shortcuts, enemies, and clues keep things fresh. I never got the feeling that the backtracking was a financial tactic, and that made the total area feel satisfying.

Syndrome is available on PC for now, but will be coming to consoles this January. I think that the game lends itself well to the use of controllers, so I plan to pick it up on PS4 when the console version launches. I enjoyed the PC version, and only ran into one technical issue the entire time I played. There were several times when I opened the map and found I was unable to walk once it was closed. The only was to fix this was to exit the game to the main screen, losing my progress since the last save. The issue was minor, and save points are plentiful, so it didn’t keep me from having a good time. These minor glitches are the stuff of early patches, so it is likely that it won’t even be a problem by the time our readers install the game. 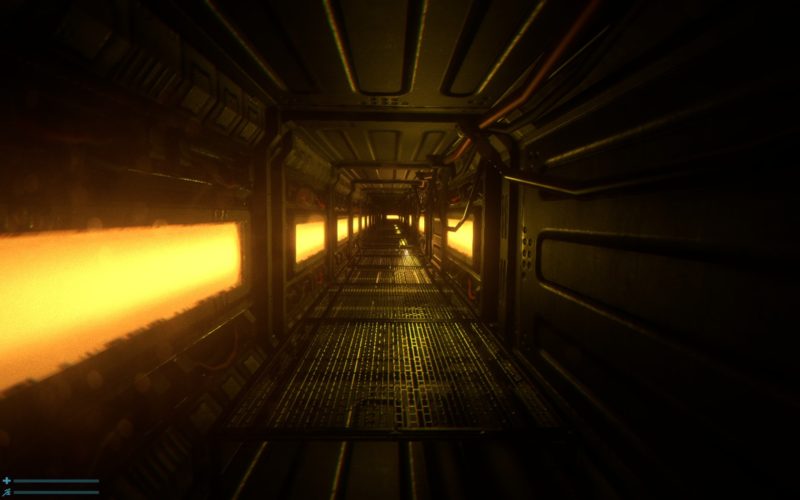 I had a great time playing this game. The mysteries of the ship are compelling. The combat is actually fun, and the exploration is rewarding. I will be playing this one again, seeing what I can get away with in combat. I want to spend more time with the bigger enemies, and see if there are any little tricks around the ship that I might have missed. It’s fun enough to merit a replay. We’ve had some readers ask about good sci-fi horror games, and give poor games in that niche a pass because new additions are few are far between. I feel good recommending that players who are looking for science fiction give Syndrome a shot. You’re not going to be breaking new ground here, but it feels like a good tribute to the world built by the Alien franchise. If you’re looking for a smooth spaceship survival game that reaches back to the glory days of survival horror, Syndrome fits.