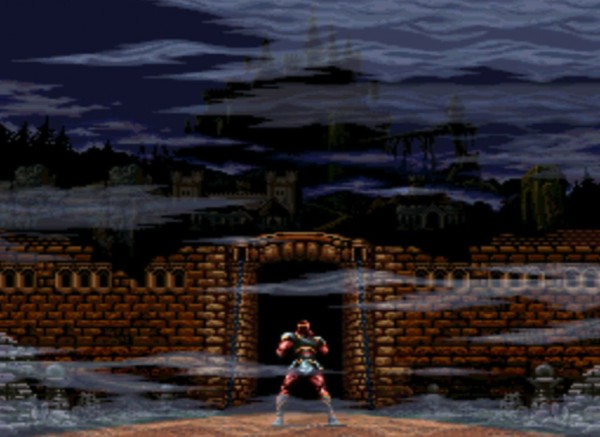 Castlevania has been through many changes over its 25+ year stint and continues to offer up new and exciting developments with every release. When Nintendo finally made the switch to Super Nintendo, along came a wide array of super-charged games.  While many were completely new games, there were those that were re-imagined on the new platform to give their classic counterparts a fresh and exciting experience.

Super Castlevania IV is just as its name implies: super. The Roman numeral ‘IV’ may be misleading; it is the fourth installment in the main cannon, but it is a re-imagining of the first title and stars none other than Simon Belmont. Don’t expect the same experience however, as this version showcases not only brilliant and enhanced graphics, but a beautiful score, a wider array of attacks and the SNES’s implementation of Mode 7, which allowed them to scale and rotate layers, in turn allowing Konami to create one of the generation’s most memorable segments.

For the first time in the series, Konami was able to give Castlevania the horror theme it had always been intended for.  From the title screen that hosts bats and crawling insects on an aging brick backdrop we are taken to a graveyard that is home to Dracula’s own resting place.  Lightning strikes and the stone shatters, releasing an ominous bat that flies away into the night sky.  Dense fog rolls in and the story presents itself, scrolling up the screen ever so slowly -all of which is backed by a new score that is just as ominous.  Needless to say the developers wanted to convey just how creepy games could be, and what better place to start than the opening screen and story? 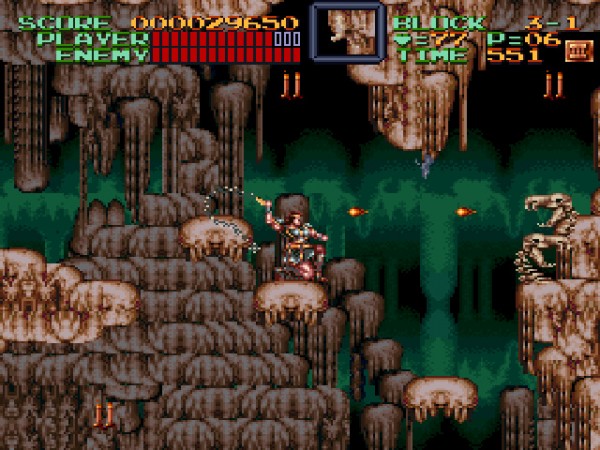 The gameplay and graphics received a major overhaul in comparison to the first three entries, which is a given.  Simon now moves fluidly as he walks, jumps and swings his way through every level. It is still the straight-forward platforming that veteran Castlevania/Mario/Mega Man fans know and love, but as a major improvement on the formula for the series Simon can now attack in every direction, which makes him much more dangerous to the bad guys and allows us players to master more skills.  His overall movement is still paced, there is no running in this entry and with that sometimes sluggish walk of Simon’s comes the added difficulty of timing heart-stopping jumps with amazing fluidity, which is part of the fun.  There are more pits, monsters and cleverly hidden traps to overcome in this adventure to ensure we utilize all our new abilities. Along the journey we encounter multiple sprites that appear as door-knockers but actually act as grounded hooks to swing from if you lash your whip at it, adding even more strategy when coming face to face with pits. With his enhanced whipping capabilities comes a humorous and unforgettable action when holding down the attack button; instead of pressing a direction whilst attacking, just whip once, hold the attack button and go nuts on the D-Pad to watch Simon flail his whip around like a fourth of July sparkler, or you can try my patented “A Whip In the Wind” move that requires the utmost amount of grace– by Mike Angileri.

The detail to the sprites and environments alike is very telling of just how hard the developers worked at this game.  Throughout the game we traverse graveyards, castles, sewers and a crumbling clock tower -to name a few- and all are magnificently pieced together to create enchanting and equally dangerous areas.  As mentioned before, Mode 7 is implemented a few times in this game to play with our eyes and mind, attempting to distract us as we make our way through the game.  Perhaps one of the most iconic scenes on the SNES comes from this game; when we finally enter Dracula’s castle we are treated to a high-wire act which has us jumping from one massive chandelier to the next, testing not only our fear of gaming heights but also the hand-eye coordination skills we should have gained up to that point.

As with any Castlevania game, music is a staple. The new versions of these familiar and epic songs really set the stage for the game and is never a burden.  Whether it’s the soothing piano that backs a waterfall or  the organ and strings tune-up that Bloody Tears gets in the clock tower, the music is always adding to the experience.  One of the things that makes it so fantastic is not just how expertly each song is orchestrated, but how diverse the tracks are to accommodate the levels perfectly.  This may out me as a huge dork, but it is one of the many video game soundtracks I have on my iPad. 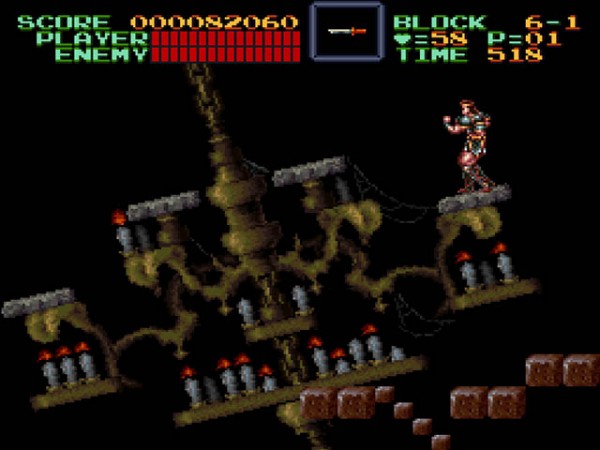 Difficulty is another big factor in the series.  All the Castlevania veterans will attest to the fact that the series is very unforgiving in its difficulty. Why should this title be any different?  Believe me when I say that no jump is too easy and the developers thought of every opportunity to throw in a god-damned Medusa head to catch us off guard and knock us to our deaths.  It is this difficulty, though, that makes us better as gamers because while it is hard and at times frustrating, it is something we can master and it keeps the game fun.  No one likes a game they can’t win, (ask anyone who’s played Friday the 13th on NES) and this game is far from that.  It keeps a steady balance of difficulty, timing and puzzle-solving -if you count the bad guys as puzzles.  Furthermore, once we complete the game we can start a new game using a password and the game’s enemies become harder to give those of us who like punishment even more to overcome.

Castlevania had made its mark on gaming by the time the SNES came out, but Super Castlevania IV upped the ante on just how creative, action-packed and creepy the series could be.  It is a perfect re-imagining of the first game and set the bar to a new height that only a few other installments could reach -if any.  If you have never played this game, do yourself a favor and pick it up on ebay or a used game store that still sells SNESes and games to experience one of gaming’s finest pieces.  I truly believe this game should stand among the best of the best including every game, in every generation. 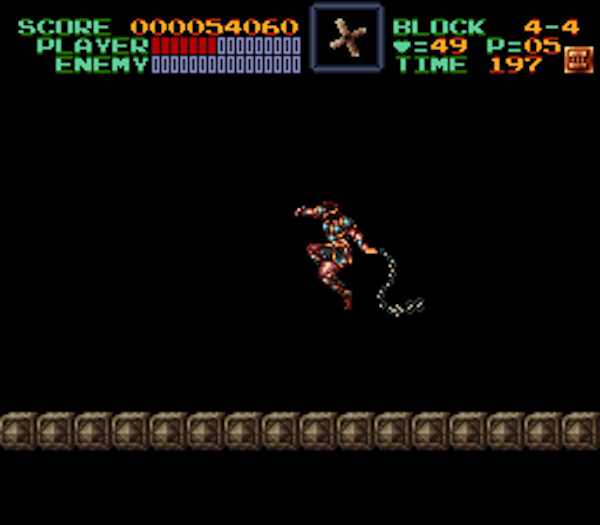