I grew up on a rich diet of PC games. Games like Baldur’s Gate and Neverwinter Nights were the burgers and milkshakes, the delicious indulgences that I enjoyed and often binged on. Text adventure games were more like home-cooked meals–hearty and nutritious but hard to find outside my own PC. I didn’t know anyone else who played them or had even heard of them. I kept coming back to them because despite their simplicity and lack of glitz, they were comforting. They were stories I could shape with my imagination, just like books, but I seemed to have more control over them. It was a fascinating idea. I always felt like there were deep and dark things hiding underneath the text if I just explored enough or typed exactly the right words. Maybe there was a hidden command that would open up an entirely new game or reveal some secret knowledge.

Of course, I eventually grew up and started to gain a basic understanding of what went into game design, and the magic of text adventures was somewhat lost. Then No Code released The House Abandon, and that underlying sense of mystery I felt when playing old text adventures was suddenly brought back completely. Stories Untold is No Code’s follow-up to The House Abandon, and it includes the latter game remastered as the first of four episodes. It’s a childhood dream realized, with the same flavor of nostalgia as Stranger Things.

Stories Untold isn’t simply a text adventure. Text drives the gameplay, but it’s encased in graphics that are reminiscent of Alien: Isolation, which No Code’s lead developer Jon McKellan worked on as a designer. After the intro scene, featuring heavily synthesized music that sounds like it came straight out of a Stranger Things episode, the game opens to a menu including four chapters, all of which are locked except the first. Clicking on the first chapter takes you to a slightly updated version of The House Abandon, where an old CRT screen is booting up a text adventure game. You see the keyboard in front of you on top of a desk scattered with other items, and as you play, the atmosphere changes around you… sinisterly.

The next two chapters offer completely different scenarios. In chapter two, you’re in a lab performing experiments on a strange subject. Chapter three has you in an arctic base responding to distress signals and deciphering codes. The first three chapters each start out calmly and lead you through puzzles involving both text and your surrounding environment, and then toward the end of them shit gets real scary real fast. I can’t talk about the fourth chapter because it came as a complete surprise and blew my mind and made the entire game worth it. Not that the other chapters weren’t worthwhile, but the fourth is one of the more clever pieces of storytelling I’ve experienced. It even made up for all the bugs. 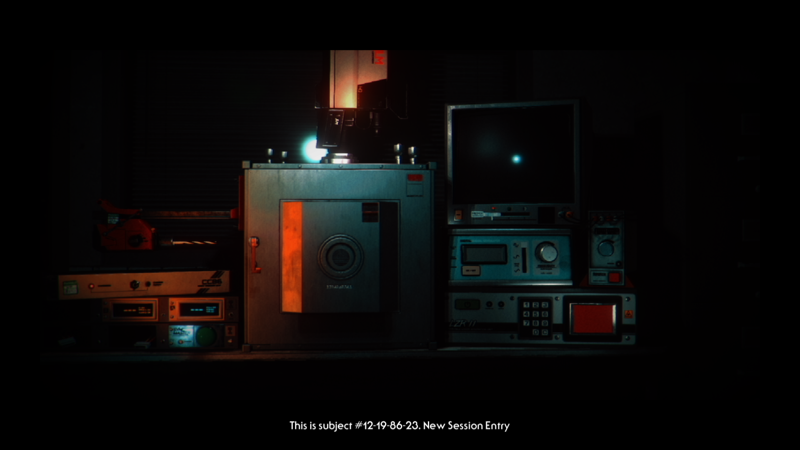 Yes, the bugs. I don’t want to scare you away from the game because I think my experience was rather unique, but I was hit with an annoying amount of technical issues. I play on a practically pristine gaming laptop (you can see my specs at the bottom of this review), and Stories Untold is by no means a demanding game, but I had more issues than Assassin’s Creed Unity. My problems began after completing the first chapter. I expected to be able to move on to the second chapter, but it stayed locked. I restarted the game a couple of times. Still locked. I sighed and replayed the first chapter. Still locked. I wondered if I did something wrong. Finally, I realized I should probably restart Steam instead of simply restarting the game, and that did the trick. I made it through all of chapter two unscathed, but chapter three crashed twice and then got stuck at a point where I was doing everything I needed to progress, yet I couldn’t go any further. I consulted a Let’s Play just to make sure I wasn’t missing something, but I was doing what I was supposed to–the game was just stuck. Some of my Steam achievements also failed to unlock, which feels kind of superfluous, like that proverbial extra kick at the end of a beating.

According to the Steam community, all of the bugs I encountered have been experienced by other players as well. I just had the rotten luck of getting them all in one playthrough. I’ve sent my crash logs and bug details to the developers, and they’ve promised a patch in the near future addressing those issues as well as others I faced, such as overly high mouse sensitivity. I can’t help but feel like all the technical issues marred what would have otherwise been a fantastic overall playthrough, and I wish the devs had ironed out some of the game-crashing bugs before release, but I’m honestly not too bothered by it, mainly because of that last chapter. Damn, it’s good.

Besides the technical problems, my other big issue is that the game maintains a classic conundrum of text adventures, which is that it doesn’t always recognize what you’re trying to tell it. That was frustrating in the ’90s because it took you out of the game. It’s frustrating in Stories Untold because the text parser doesn’t recognize even some of the basic commands that were common to the old games it’s trying to emulate. Still, some of the tried and true commands are there, and it’s not too hard to pick up on the game’s language and understand what it’s trying to get you to do next. It leads you by the hand a bit more than classic text adventures, but it makes up for it with its more experimental bits of gameplay.

Despite the bugs and performance issues, which will hopefully be ironed out soon, Stories Untold is not to be missed. It’s a mind-bending trip back to ’80s horror, to places unseen and unexplored, and it’s so… damn… clever. There’s so much to take in that you’ll want to play it twice just to see if there are things you missed, because it’s almost unbelievable how many little things left me gaping in awe. Saying too much would be spoiling it, and Stories Untold is best digested with a generous helping of mystery. It’s beautiful, achingly nostalgic, and the smartest game you’ll play all year. That’s right, I’m calling it.