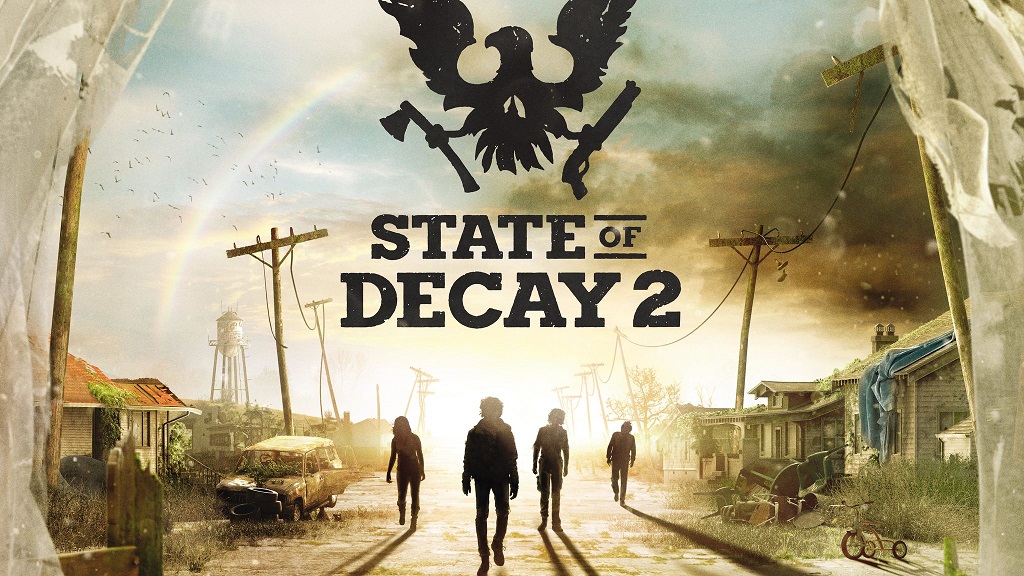 The last time players were thrust into the post-apocalyptic zombie title State of Decay was all the way back in 2013. Despite its humble beginnings, the game went on to become a sleeper hit, so it really was no surprise that it would get a sequel. I spent some time with State of Decay 2 over the past week, and while there are definite improvements over the original title, there are some areas where it feels decidedly the same, for better or worse.

Visually, State of Decay 2 is a modest upgrade, which makes it easy to run the game on a PC (my platform of choice) that maybe isn’t the most powerful build in the world. The game has a nice aesthetic that fits the atmosphere and isn’t overly complicated. The visuals didn’t blow me away, but they’re really not meant to. That said, it’s definitely not an ugly game. The days are bright and the nights are exceptionally dark, as the lighting in particular looks great. The music in State of Decay 2 often times reminded me a lot of Rimworld. I appreciated this, because it’s refreshing to play a zombie game where the music isn’t always haunting or unnerving. Variety is always welcome. 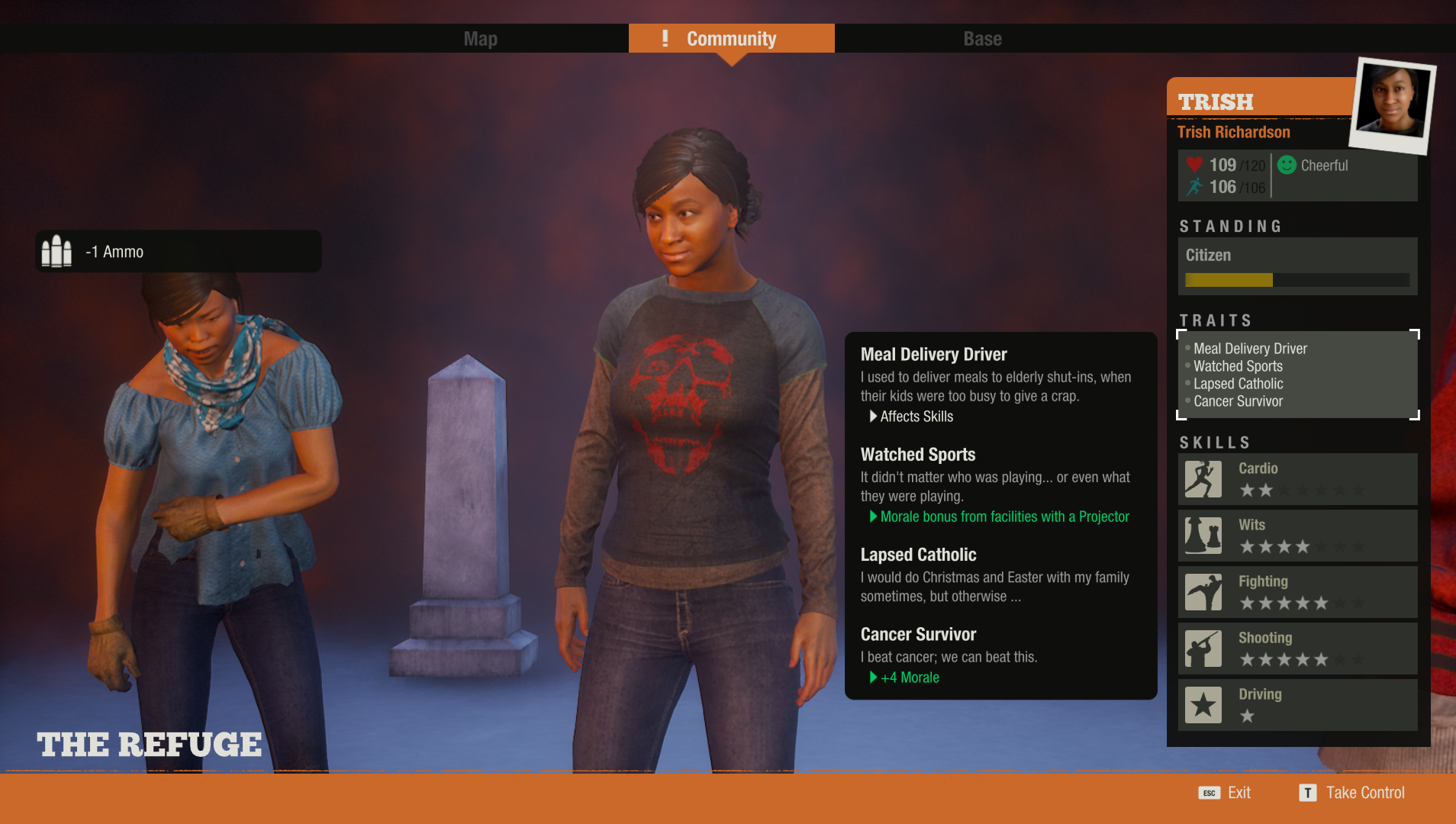 If you’re not a fan of base-building, then there’s little chance that State of Decay 2 is going to change your mind. The game’s core premise is to establish a base for you and your survivors to keep them alive and happy while progressing towards your goal: survival. That involves finding a base, finding the materials to build your base’s facilities, food to keep your survivors fed, weapons and ammo to protect yourselves and other post-apocalyptic necessities throughout the game’s multiple maps. Sure, there’s combat and helping other factions out, but at its core, if you don’t like the idea of managing a base and resources, you’re not going to have fun here; there’s no getting around it.

Inch by inch, you put yourself, and your little band of survivors out there and survivors start to take notice of you and begin asking for help. How you interact with them leaves a little bit to be desired, much like in the first title. It’s tedious and a lot of time serves only to waste your resources for meagre rewards. While there are advantages to helping others, your health, stamina, weapon durability, vehicle durability, and trauma management are finite, especially so at the beginning of the game. And seeing as how the other survivors’ missions are of the ‘go here, do this, kill this’ variety, you find yourself balancing whether the risk is worth the reward — particularly when these situations require you to drive to a far-off settlement. You have a limited time to make up your mind too, because let too many of these favours fall by the wayside and those groups might leave or become hostile — this is something I didn’t enjoy one bit. 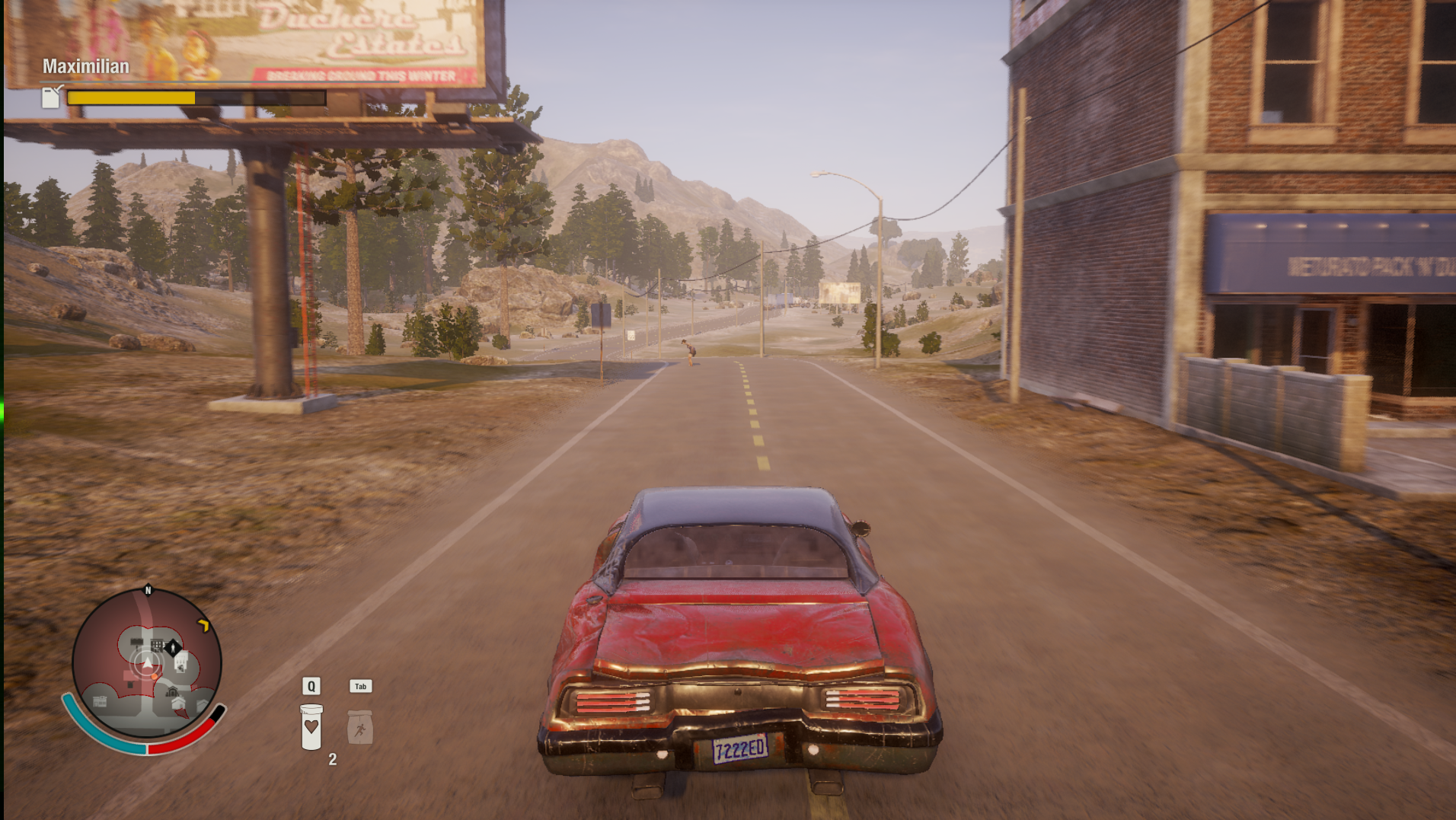 Killing zombies, completing missions, and helping other survivors or factions will garner you some *Influence.* Pick off a couple of zombies with some headshots and you’ll be rewarded with Influence. Run over a horde with your car (not advisable by the way) and you’ll be rewarded with more Influence. You quickly find that Influence is extremely valuable, because whatever you want to do in the game requires it. You can’t expand your base, establish outposts or trade with other factions without a boat-load of Influence, and nobody likes Influence grinding, so you have to be careful with your Influence management. Influence!

The game allegedly procedurally generates characters, so no two are supposed to be the same. Even if they are visually similar, their clothing, stats and traits won’t be the same. In theory, this is a great way to keep the game fresh. However, in practice, I found the same characters wearing the same clothes, with different voices and stats. A little off-putting, a little disappointing.

A welcome addition to State of Decay 2 is the cooperative multiplayer mode. Unfortunately, the game doesn’t feature any matchmaking from what I could find; you have to bring your own friends to play with. It’s a shame, because at the time of publishing, I didn’t have anyone to play with and couldn’t really explore this feature. In the times where I attempted to “call for help” using my in-game radio, my calls went unanswered. [Editor’s Note: a lack of first-hand co-op experience during review period was a concern we expressed when we initially received review code, but only one was ultimately provided]. 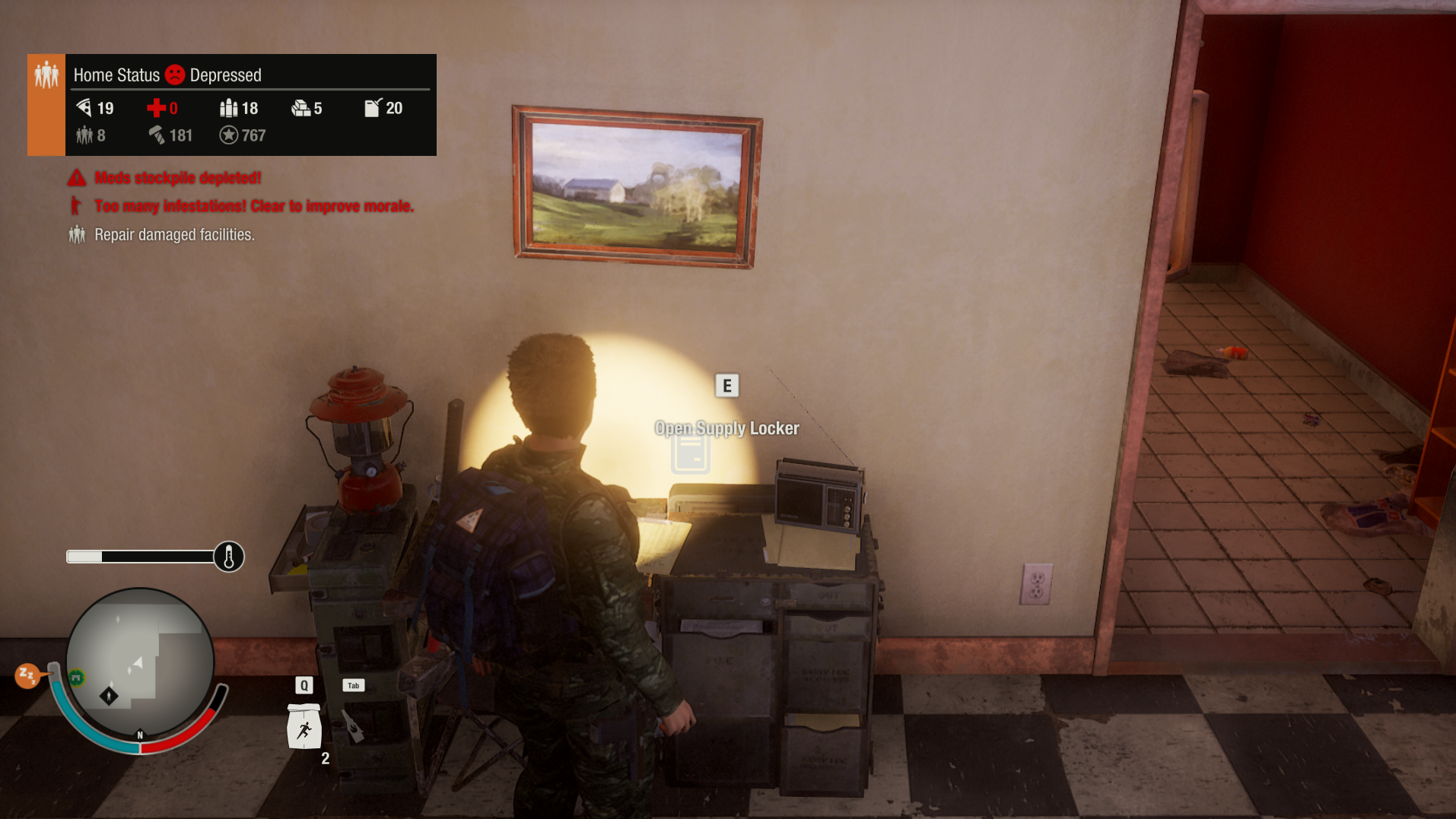 As previously stated, there’s a lot of the game that feels unchanged. In places where Undead Labs could have improved upon the original, they mostly settled for emulation. There are certain things that I would have let slide for the first title but have a harder time overlooking this time around. Take, for example, the expansive maps — a large map does not necessarily mean a significant amount of content, and there’s a lot of empty space between settlements that make traveling between them a chore.

The game is also rough around the edges, technically speaking as well. In my time with the game I couldn’t count how many times I found a zombie on the ground, clearly meant to be feasting on another body, except there was nothing there. There are no animations for refilling or repairing a vehicle, and NPC behavior is a little out of sorts. Sometimes a follower will just disappear and not help you, other times they can best be described as a cat at 3AM. They will unnecessarily bolt around a house for no reason while you’re trying to talk to someone or do something. They’ll bump into one another as they run from room to room, window to window. It gives the game an unfinished feeling, and I expected better after all these years. Hopefully, these issues can be fixed in a patch. 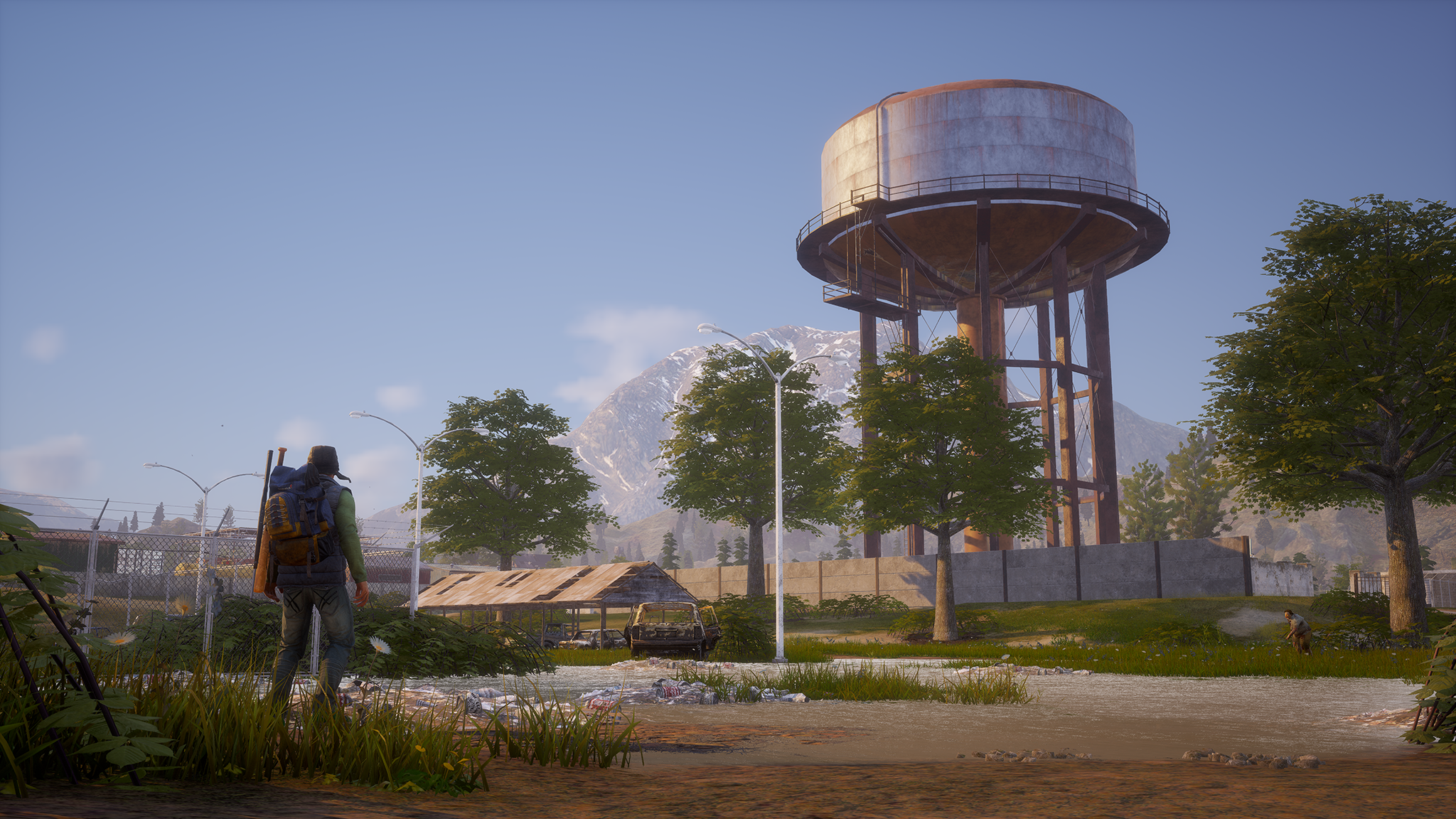 Despite these shortcomings, I could easily put another 100 hours into the game without issue, especially once I can team up with close friends. If you liked the original State of Decay, you’ll enjoy the second one too, but temper your excitement somewhat if you expected a radical upgrade.

Window Store code was provided by the publisher for review.