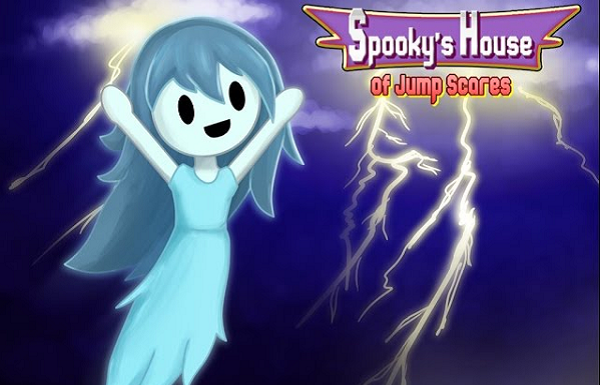 We have probably all found ourselves walking through the halls of eerie mansions, castles, or similarly dark places throughout our horror-gaming careers. Ambient noises, flickering lighting, and a sense of unease keep you on the edge of your chair, when suddenly a monster pops out, goes “boo!”, and vanishes back into the dark. Amnesia might do this with a Lovecraftian horror whereas Doom prefers hellish demons. Today’s game, Spooky’s House of Jump-Scares, uses cardboard cut-outs of cartoon ghosts. And it works.

Created by the two-man team of independent developer Lag Studios, Spooky’s is a parody on the tropes and history of the horror genre that, despite of its comedic intentions, actually has an interesting take on gameplay that keeps it fun to play. Many other parodies and joke-games struggle to deliver a product that serves as something more than a one-off gag, but Lag Studios definitely pulled it off here.

At the start of the game, players are introduced to the mascot character “Spooky” who is literally a ghost. She welcomes you to her mansion and challenges you to make it through all 1,000 (or so) rooms that it contains and discover what might possibly lie at the end of it all. Many have gone before you and, in true horror gaming style, you will find many notes left by previous adventurers and other unfortunate souls that reveal more of the plot. 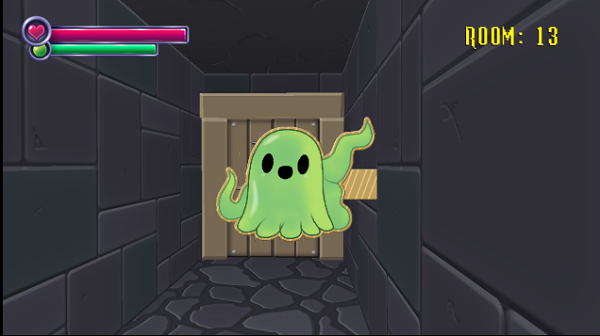 At first glance, the game’s visual style makes it look like a cartoon, thanks to the vibrant colors and cute mascot. Your first enemy encounters will usually involve the aforementioned cut-outs of ghosts and pumpkins, which goes accompanied with sound-effects that are way more dramatic than what is actually happening. The jump-scare still works perfectly fine, yet afterwards you can’t help but laugh at yourself for being scared of something so innocent.

The game is designed around moving quickly from room to room, since there really are over a 1,000 to advance through. There is a sizable collection of pre-built rooms and every time the player finds a door, it selects another random one from the collection to put the player in. Gameplay therefore boils down to identifying what kind of room you have landed in and determining the most efficient way to make it through. After every checkpoint, which occur every 50 or 100 rooms, some new layouts will be added to the pool to ramp up the difficulty.

“But why the rush?” you might ask. After all, I just said the game was silly and innocent, so why would you run through it all? Well, at set moments the game leads you to areas that advance the actual story, again via the medium of notes. You might be walking through the cobblestone halls of a castle when suddenly you arrive in an abandoned restaurant setting. These rooms are often a departure from the cute style and are more in line with traditional horror levels, as you move around to find keys to open locked doors that hold more notes and keys. 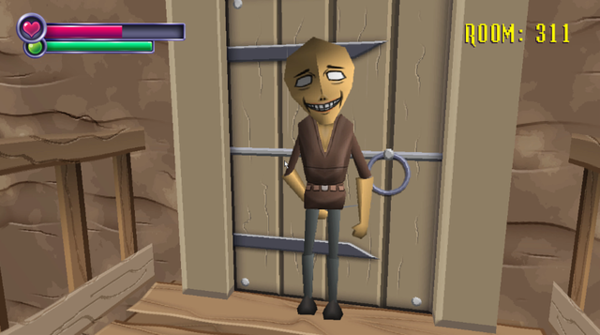 These parts are brief enough to not outstay their welcome and serve to slowly introduce a new monster, which are actually designed with the intention to be scary. After it finally appears, it will begin to chase you when the normal pace of the game resumes and uses its special abilities to hamper your progress. Even after the scripted introduction, the creature can then show up at any other time to catch you off-guard and resume its chase. Failing to outrun it will result in a shocking death scene exclusive to each type of monster.

As you play through the game, you definitely work your way towards the end point, but at the same time you gradually unlock more creatures to haunt you. Most of these are references to classic horror games and other popular scary stuff – a terrifying mannequin creature uses mist and glitches your textures, a grinning dole resembling Zelda’s Happy Mask Salesman stalks you and attacks whenever not directly observed. You got levels that resemble the rusty, metal hallways of Silent Hill or the haunted school areas of Corpse Party. There are hidden nods to Madoka Magica and the SCP Foundation; it’s like a giant game of spot-the-reference made exclusively for the die-hard horror fan. I love it! 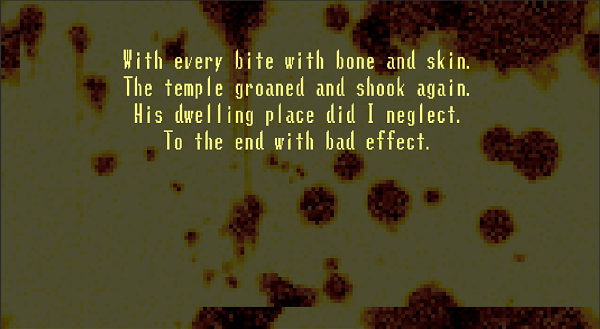 The monster chases also come with theme songs specific to each creature and some even have distorted voice-acting. It’s fair to say I was feeling surprisingly tense from time to time. It’s a shame, however, that since coming out of Early Access, few issues have actually being resolved. Textures still glitch out, even when they are not supposed to, and secret rooms that are supposed to be a rare treat occur way too frequently. The newly-introduced stealth mechanics are also way too contextual and make the one room in which they are needed a tedious part with many Game Overs.

Lag Studios prides itself on making games that serve a specific taste in favor of conforming to standards that broaden their demographic and Spooky’s House of Jump Scares is a clear example of such. While its repetitive gameplay and frightening prospect of having hundreds of rooms to clear may turn off many, the mechanics and creative, referential creatures you have to deal with on the way are surprisingly solid. The stamina meter requires you to think deeply about when to run and many of its references are sure to excite fans of famous and obscure franchises alike. Even so, the ‘free to play’ status of the game is an attractive offer and even if you don’t intend to play all of it, Spooky’s can still offer a good laugh.