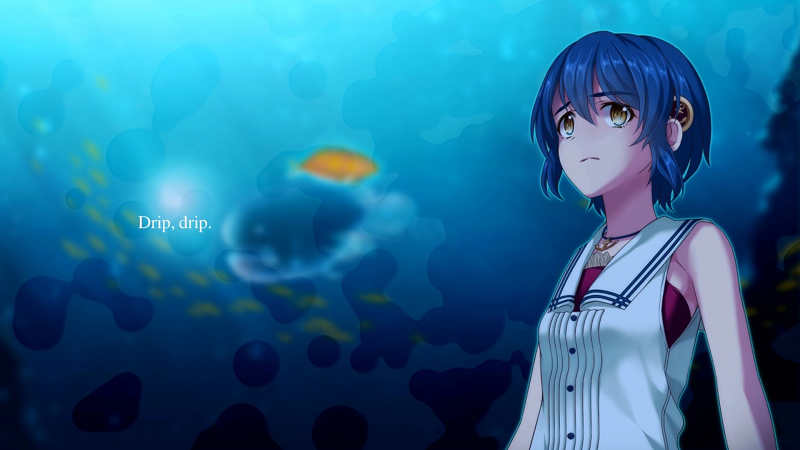 In a world that is often less exciting than many would want it to be, rumors exist to create and spread interesting stories about familiar places. Ghosts that haunt the local graveyard, churches with a dark past that still lingers, eerie abandoned buildings; we love to invent tall tales about these places to give them a unique identity. Sound of Drop – fall into poison – is a game all about such rumors and how it’s probably better if they remain fictional.

Originally released in Japan last year as Shizuku no Oto, the game has only just been released on Steam by the Sekai Project localization team. It tells the story of Manten Aquarium, a beautiful establishment located at the top of a major shopping center in Japan that mostly attracts young adults looking for a cool dating spot. However, it also receives a steady stream kids looking to investigate the various rumors surrounding it: a mysterious exposition that appears at midnight, fish with human faces, and tanks with ghosts inside of them, among many others.

Main character Mayumi Nakanobe is an introverted high schooler that has a history with the aquarium, as a family trip five years ago concluded dramatically when her younger sister went missing and was never found. It’s therefore a bit awkward when her best friend, the excitable and popular Himeno Tamagawa, insists on going to the aquarium to research a string of rumored disappearances. 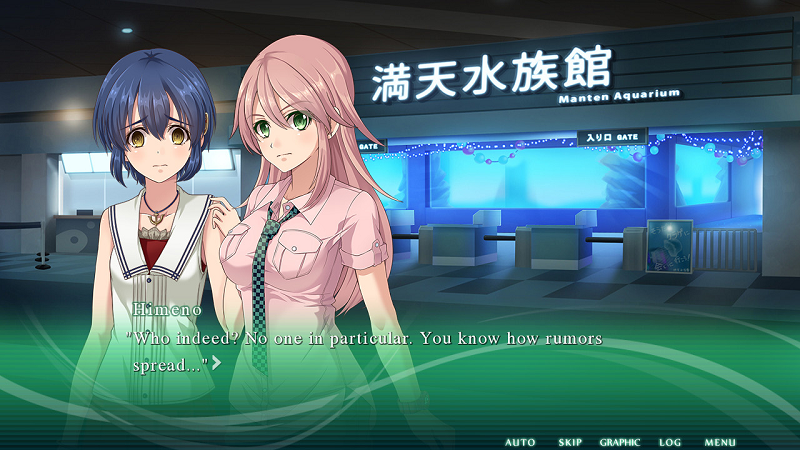 The trip starts off normal and fun, but suddenly all the other visitors seem to vanish and the two friends are separated. The aquarium then turns hostile as monstrous fish pour out of the tanks and paranormal phenomena begin to occur.

As with most visual novels, you just read through the story at your own pace and make various decisions that create branching story paths. The game features a total of four endings and several more death scenes, which is actually where the writing really excels. As Mayumi explores the aquarium, she encounters various threats in the form of escaped fish or paranormal activity. If you make the wrong choice here, you are treated to a lengthy and often uncomfortable scene that leads to a “bad ending”. I actually found myself causing these on purpose just to see what would happen and the results were rarely disappointing.

If that is the game’s greatest strength, then the first 30 minutes or so is its weakness. Sound of Drop is a pretty slow boil and I put the blame for that solely on Mayumi, our blue-haired protagonist. For a long time, her personality begins and ends with “anxious shy girl” and her role in the plot is what I’d compare to that of the average cat: chase whatever currently draws attention. Every time you meet a character, Mayumi will follow along for a while until somebody else catches her eye, usually a vision of her missing sister, and then chase that for just long enough to meet someone else. Even after you specifically answer a question about who you want to escape Manten Aquarium with, she still manages to get side-tracked constantly. At one point she even runs off to chase someone while someone else she met is in the process of being murdered, it gets that ridiculous. 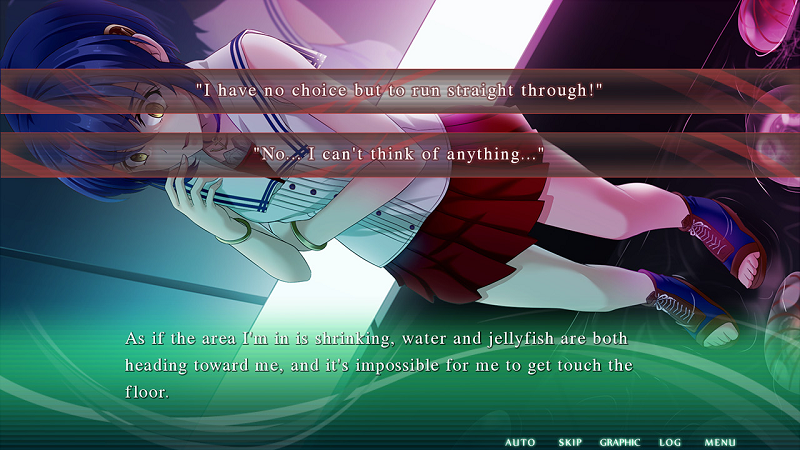 The rest of the cast is a lot better, starting with Himeno, who I really grew to respect. Pretty and popular at her school, she preferred real friendship over peer pressure and never betrayed Mayumi to go partying, even if it angered the rest of the students to no end. We also meet plenty of other characters such as an ominous lady that claims to be in charge of the aquarium and a stubborn girl that matches the description of Mayumi’s missing sister.

Eventually, my rather critical first impressions faded, as Sound of Drop started to really grow on me. It’s not hard to sympathize with Mayumi’s ordeal, even if she’s an idiot from time to time. She is just an average girl who is suddenly thrown into a dangerous situation and whose every decision now involves a life-or-death scenario that affects either her or a friend. There is a lot of weight behind every choice and I wonder if there is some kind of perfect playthrough in which everybody gets to live. If there is, I wouldn’t be surprised if I find myself replaying this at some point, because the emotional storyline is definitely worth re-experiencing.

Yes, emotions, those embarrassing feelings you get that force you to admit that a fictional scenario befalling fictional characters made you weepy. In defense of my manliness, I didn’t cry or anything, but I certainly felt drawn into it and I feel that the designers nailed some of their emotional highlights. Helping out on that front is the game’s musical score, which prefers the melancholic and slow piano pieces. While not stand-out or memorable, they were suitable for each scene and matched well with the beautiful graphics, creating a rather serene whole. The art is perfect, I have no other way to describe it; the character sprites are richly detailed and carefully crafted with a genuine sense of fashion that befits the personalities of any given character. In simpler terms: everybody looks downright fabulous. 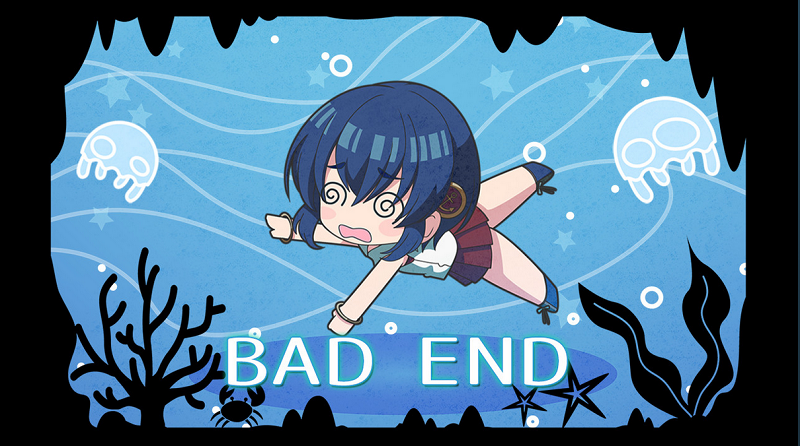 While just looking at sprites on nicely detailed backdrops might get boring after a while, the game prevents this by including just the right amount of art pieces that show key scenes play out in more detailed manner. This gives the death scenes and scares even more punch, something the recent remake of Higurashi thoroughly lacked, as you get to actually see somebody being torn apart or mutilated instead of just reading about it.

Even after the story kicks into full gear, following that slow opening, some minor problems do remain. I wasn’t too keen on the story’s villain and some dialogue can get a bit drawn-out, but its positive qualities completely outshine those. If you have any interest in visual novels at all, then this is a great entry that will take about 2 hours to complete and features some of the best art you’ll see in a visual novel this year.