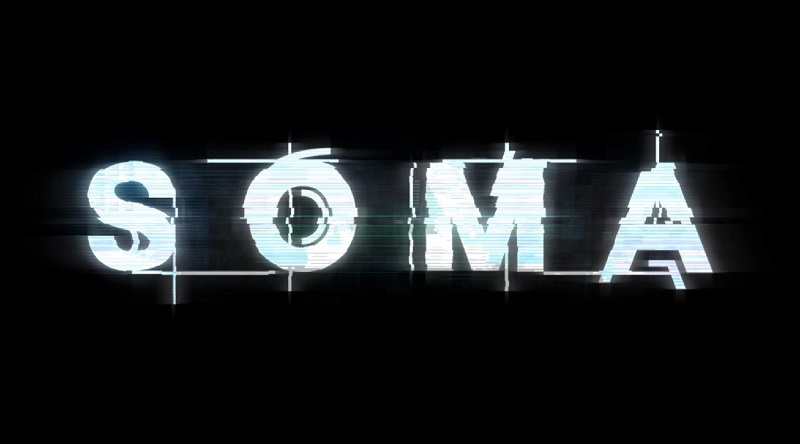 The survival horror genre experienced a slump of sorts last gen, with classic IPs struggling to find their footing on the newly released consoles. Standout newcomers to the genre were few and far between, and on PC, it was a similar case. That was until Amnesia: The Dark Descent released. Developed by Frictional Games, known prior for their Penumbra series, The Dark Descent was a huge success for the independent developer and sparked a fire in the survival horror genre for years to come. With that, Frictional Games has a lot to live up to with their first new game since The Dark Descent. Having their most successful title looming over their head and A Machine For Pigs as a fickle reminder of how unreceptive fans may be to change, will SOMA be the next champion in the genre? Queue the review!

Developer Frictional Games is back with a brand new game in their growing library of survival horror titles. This time around, rather than being set in the Victorian Era or present day, the developer has tackled the next logical thematic choice: sci-fi. SOMA casts players deep into the ocean on the PATHOS-II research facility some 100 years into the future. Now, it wouldn’t be a horror game if a research facility didn’t have something go wrong, right? Of course not. 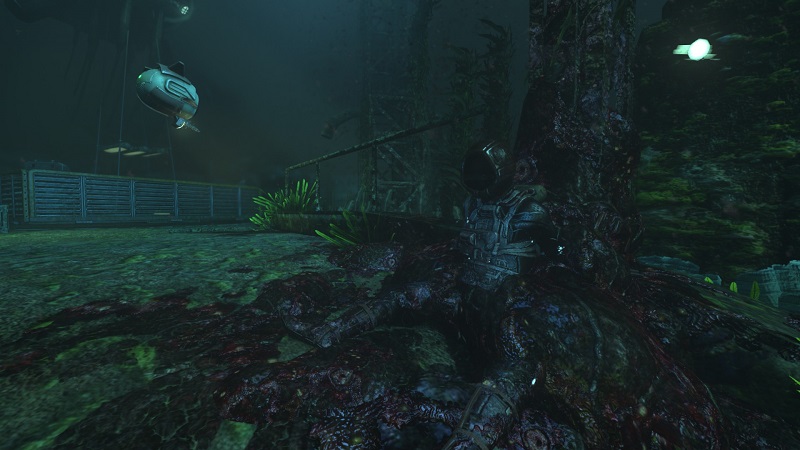 When the governing AI system of PATHOS-II, the WAU, alters its programming, it begins to consume the facility using a technologically advanced substance called structure gel. Previously used for developmental means, the structure gel mutates and becomes a catalyst for change. Terrifying change. The substance manifests itself as cancerous, barnacle-esque growths that infect surrounding machinery and organic matter. If you have any semblance of trypophobia, prepare to be made very uncomfortable. The WAU’s expanding influence over PATHOS-II leads to its human inhabitants finding themselves in either one of two outcomes: their consciousness moved to a machine, and they’re none the wise, or they’ve become tormented husks following WAU’s altered programming. Those that don’t fall into either category remained cognisant of their altered physical form and left to deal with the resulting horrors of their surroundings and own existence.

SOMA embraces psychological horror in one of the best ways, digging into the discussion of what it means to be human. Existential themes are the name of the game this time around, and this produces one of the most memorable and effective horror game stories I’ve experienced in quite some time. Protagonist Simon Jarret is your typical twenty-something-year-old dude who suddenly finds himself on the PATHOS-II facility among a nightmare of living machines. This journey leads Simon down an emotional road where he begins to quantify his own identity and sense of humanity. Aiding Simon in his journey is PATHOS-II research scientist Catherine Chun. The two set out to save what’s left of mankind and in the process uncover the story of what happened to the world. 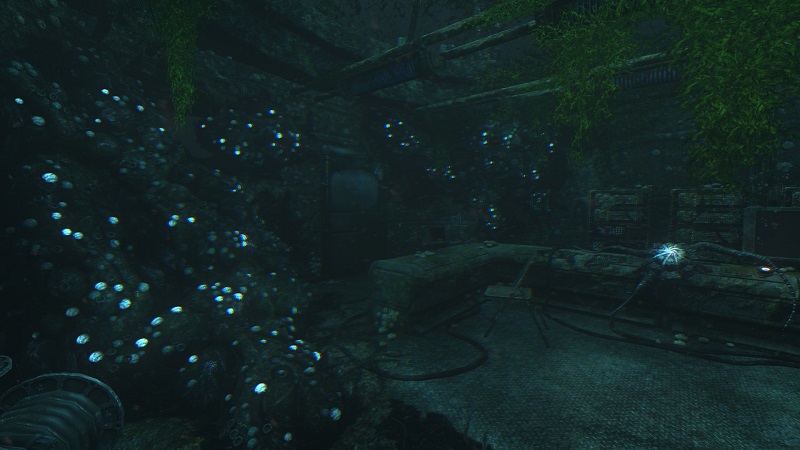 Frictional Games has pulled out all the stops and have made their most ambitious game yet. SOMA is a beautifully horrific game, from its visual design to sound. Playing this game in an audio setup other than surround sound or headset would eliminate much of the ambiance and terror the game accomplishes through audio. There’s a strong sense of spacial awareness present in SOMA’s audio design, and it produces a fantastic atmosphere that’s easy to become immersed in. Visually, SOMA adopts a low-fi tech aesthetic for its vision of the future. Having played The Creative Assembly’s Alien: Isolation last year, the desire to envelop myself in sci-fi horror has been strong since, and SOMA delivers a diverse set of locations. And the deeper into the game one goes, the more disturbing the environments become. SOMA can get pretty gross.

Like Frictional’s games before it, you play as a completely disempowered protagonist. When confronted by one of SOMA’s many hostile creatures, stealth must be employed to avoid detection. Enemy pathing patterns vary depending on their type, with the earlier types being far easier to evade than those found in the latter part of the game. Whereas one type may simply ignore Simon if he sits in a corner without looking directly at it, another may react completely on sight and sound, requiring avoidance altogether. There isn’t much time to learn these patterns as SOMA is not shy about throwing a completely unique encounter at you, leaving you to react at the moment. I did have trouble with one recurring enemy though in the latter part of the game. With it standing near a panel I needed access to, it didn’t react to one method the game makes available to you as an option, in this case tossing an object to make a distraction. 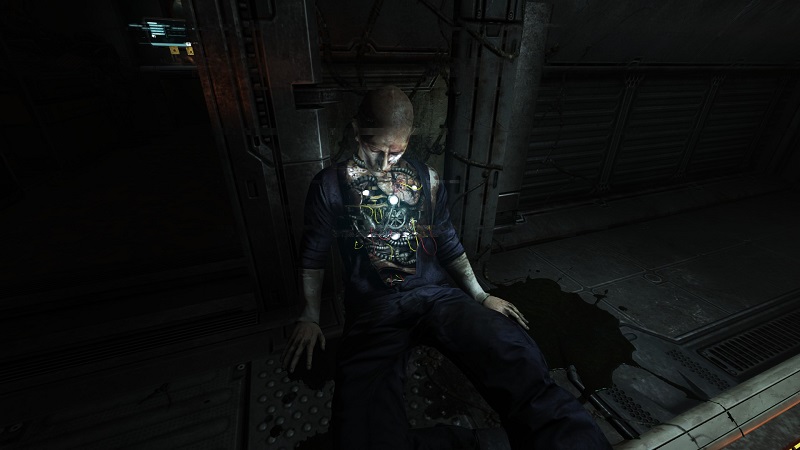 Creatures within SOMA range from lumbering masses of machinery, mutant aquatic life, to humanoid monstrosities with porous skin and unsettling wails. I have to give the game props for having a consistent assortment of scary baddies. Frictional’s willingness as mentioned earlier to introduce something new for just one small scene is great as well as it unquestionably leads to unsuspected “WTF” moments.

Outside of enemy encounters and foreboding environments as effective horror elements in SOMA, key story scenes allow players to make binary choices with profound implications. Harkening back to the game’s existential horror – what it means to be human – these scenes strike a cord. I was very conflicted with a choice halfway through the game that put someone’s fate into my hands. Sure, we’re given options like this in games all the time, but trust me when I say you’re likely going to think on it quite a bit. 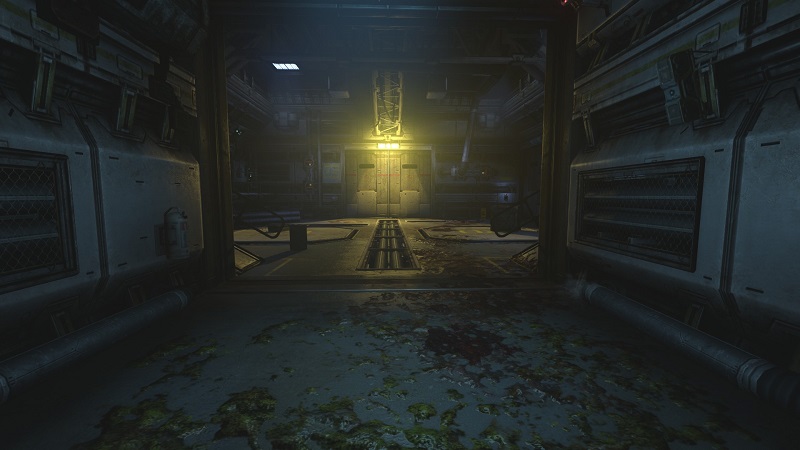 In my preview of SOMA, I made a mention of the tone of the game’s voice acting to be a bit too conversation, with exchanges between Simon and Catherine a little on the light side despite their circumstances. I still think their more relaxed conversations fall into this spectrum, but some quality acting is on display when tensions rise in the latter half of the game. And by the end, the two remain memorable characters. Perhaps it’s just me; I know I wouldn’t be as calm and collected if I were in their position. Not at all.

As Simon makes his way through PATHOS-II to save himself and Catherine from the influence of the WAU, you’ll be tasked with the occasional obstacle that needs to be solved. SOMA has puzzles, but nothing too complex. You’re going to be allocating resources via terminals or locating a key item to proceed. Nothing fancy. Throughout the facility lie documents from its crew, revealing their last days too. Written notes are strung about desks, boards and on computers discussing the rising anxieties from the crew. The game does a fine job of communicating their story with these notes. Simon also can listen in on past transmissions via the intercom system or by interacting with a crew member’s corpse. Finding and listening to the audio from the deceased means players can better piece together that aspect of the game’s story through exploration. 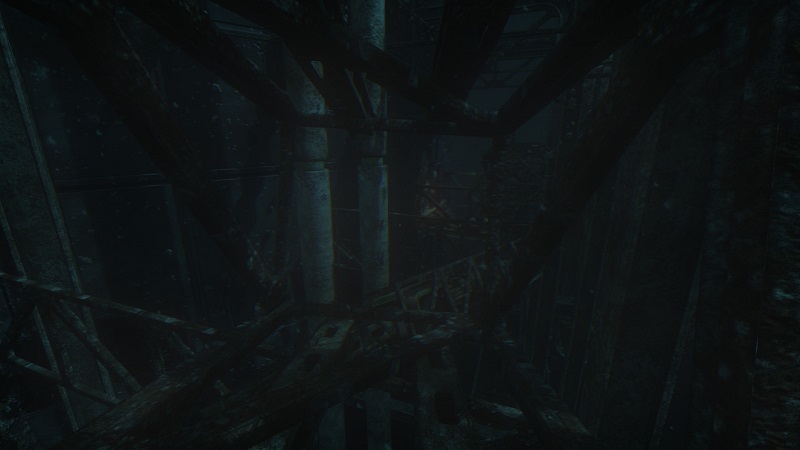 I mentioned this on occasion in my reviews when I play a game that manages to scare me. As someone with a decent amount of experience writing about and playing survival horror games since I was a kid, the effectiveness of them has waned. It’s tough finding a horror game that accomplishes this, and that’s not to say that I’m too cool for fear. In fact, I want to be scared. I want to dread playing a game enough that I need to take a break before continuing. And guess what – SOMA has scared me the most than any other horror game has in about a decade. The deep sea isn’t immediately terrifying to me, but a phobia I can understand. The dark abyss, a seemingly endless space populated by unseen creatures. Monsters, if you will. When not in the halls of PATHOS-II, players will be set out onto the ocean floor to reach their latest objective. These scenes aren’t unsettling at first, but later in the game Frictional turns the dial up to 11 and it’s incredible. Visually and audibly, it’s unnerving to a degree I haven’t been familiar with for a long while. Bravo.

SOMA is Frictional Games’ best work yet and a tour de force in the survival horror genre. It subjects players to finely crafted sensory and narrative horrors, with an effectively unsettling story and polished design. SOMA may not be a revolutionary title within the genre, but its pacing and how it frames its terrors is masterclass. It’s far more narrative driven than the studio’s past work as well; a compelling cast of characters and philosophical story makes SOMA more than just a series of good scares. The studio has nearly a decade of experience crafting horror and it shows. It’s a damn fine example of what the survival horror genre can accomplish.