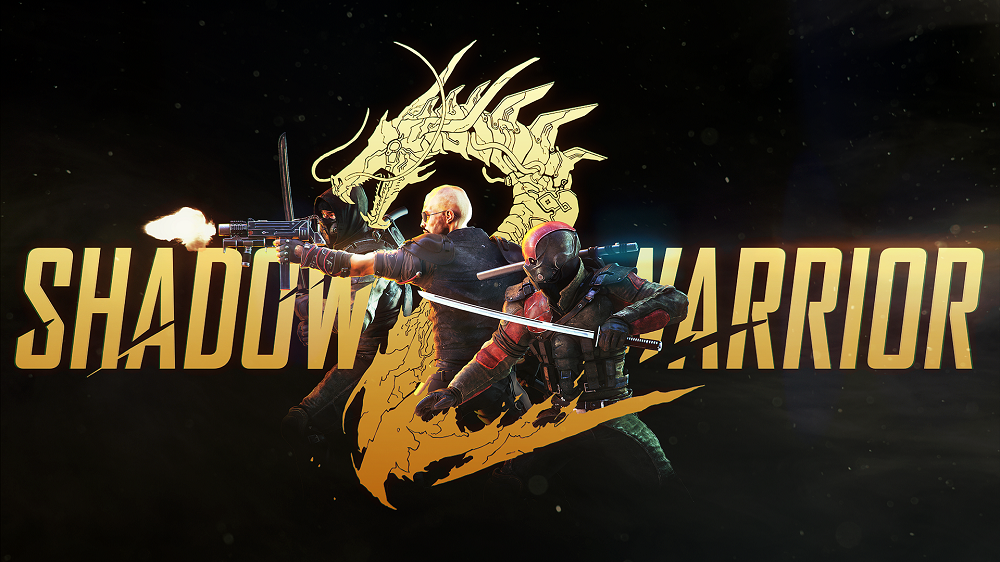 It’s been three years since Flying Wild Hog’s Shadow Warrior reboot released, and a lot has changed since then. I’ve moved out of my mom’s house for starters, and retro shooters inspired by the 90’s are gaining prominence. Shooter IPs old and new are following in the footsteps of their denim-jacket-wearing ancestors. DOOM, for example, surprised many when it released earlier this year, and indies like Dusk and STRAFE are on the horizon hoping to re-introduce the twitchy gameplay and overindulgence of classic shooters to today’s gamers. Shadow Warrior 2 releases to a slightly different landscape than the first game, which helped it stand out so well, but it’s brought enough new toys to the party to be one of the year’s best (and silliest) shooters.

After the events of the first game, Shadow Warrior “hero” Lo Wang continues doing what he does best: being a violent gun – and sword – for hire while also being an asshole. The merger of the human and demon worlds is treated more like a great time of unrest rather than a declaration of the end of days, with some returning characters profiting from new scientific discoveries sourced to the demon world.

Once again, the plot doesn’t add much to the overall experience of Shadow Warrior 2. Much like the first game, it’s story is serviceable but far from quality – which is especially disappointing given Shadow Warrior’s surprisingly somber conclusion. I had hoped that was a sign that Flying Wild Hog could do more with the series’ narrative, but ultimately you’re still going to get your enjoyment out of the gameplay primarily. It’s slapstick through and through, which leads me into one of my first issues with Shadow Warrior 2: the comedy.

Lo Wang is not a character of depth, but one of snark and cheese. The series has become defined by this character, with its marketing playing up how silly he can be and his penchant for dick-related jokes (of course many tied to his name). For the better part of Shadow Warrior 2, though, Lo Wang’s jokes just don’t land, often inspiring groans rather than chuckles. There’s a balance to be hand when it comes to intentionally corny jokes, where even if they’re unfunny the delivery could sell them to the audience. Much of the writing feels like a half-measure between trying to be witty and not trying at all. During most interactions Wang has with other characters, his quips are ignored; he is a soundboard of silly comments lacking a proper straight man, despite once again being saddled with a spiritual companion residing in his head. 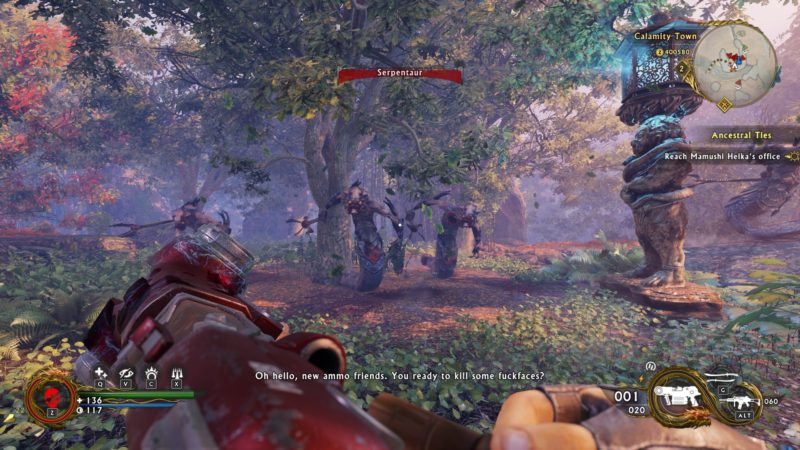 But you’re not investing in Shadow Warrior 2 for the writing alone, right? You came here for action, the gore, the weapons, and the retro shooter violence. Shadow Warrior 2 has that in overwhelming droves. The weapon selection is borderline excessive, with new types dropping quietly during battle and becoming available for purchase in the in-game store. Lo Wang’s arsenal includes his trusty bladed weapons, pistols, shotguns, sub-machine guns, machine guns, grenade launchers, rocket launchers, “nail” guns, bows, energy weapons … the list goes on. Expect a dozen or so types within each category; it’s ridiculous.

In addition to having a vast selection of weaponry, Shadow Warrior 2 features enhanced RPG elements in the form of numerous equipable upgrades. Each weapon has a set amount of slots where acquired upgrades can be mixed and matched at any time. The same can be said of Lo Wang, who has three available armor upgrade slots and space for one special amulet that unlocks new abilities like dual wielding or second chance before death. The amount of upgrade items and weapons you receive over the natural course of playing can be overwhelming at first. Initially, I was turned off by how much the game threw at me in regards to weapon selection and customization, but sorting out the junk regularly makes this aspect of the game more manageable.

Speaking of excess, Flying Wild Hog has absolutely stuffed Shadow Warrior 2 with enemy types – from Yakuza, cyborgs, cyborg Yakuza, possessed humans, mutants, big mutants, demons, cybernetic demons, mutated animals – holy shit are there a lot of things to kill in this game. Demons range from tiny and mean to big and grotesque. Character models in Shadow Warrior 2 may be the least visually impressive aspect of an otherwise striking game, but foes are well designed and imposing. 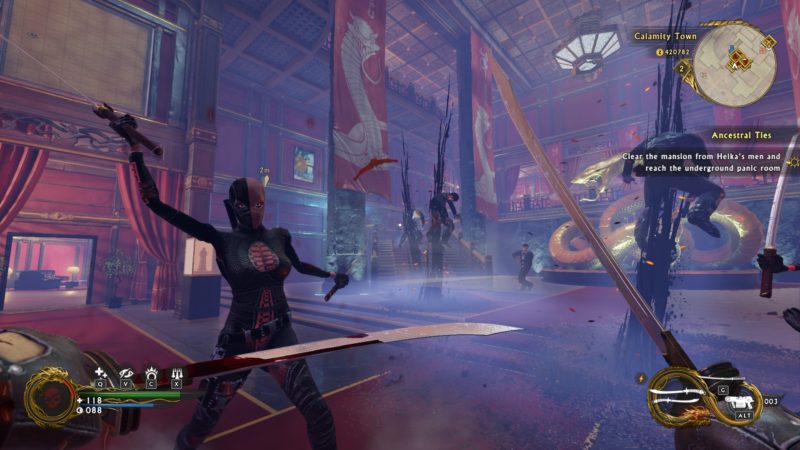 Swordplay is reminiscent of the first game’s, but the team has simplified special attacks and abilities. I originally had an issue with how all abilities were mapped to directional keys in the first Shadow Warrior, and this has been remedied by tying just a stab and spin melee attack to W and A (or D) with RMB respectively. Powerful abilities such as Healing Flame, Chi-Blast, and Grip of Darkness have dedicated keys. Both tweaks here make combat more enjoyable, although with how abundant weapons are, I’m disappointed that melee weapons are limited to just two special attacks.

Combat in Shadow Warrior 2 quickly is an activity you can’t go 5 minutes without. Thanks to an unlimited-use dash attack, combat in Shadow Warrior 2 is a frantic game of mashing Shift while unloading clips and chopping off appendages. This game gives the newest DOOM game a run for its money with how fast the action can be, and the impressive level of visual effects present are, to say so again, nearly excessive – but incredibly enjoyable.

You’ve got your grunt-like enemies that act as fodder for their bigger, more skilled friends, and then you have mini-bosses. These guys often stop moving to make themselves immune to damage by connecting themselves to the lesser enemy units. They can only be wounded when all units that they’re linked to die. I found this interesting, as it adds a level of challenge without making every encounter feel overly difficult because Big Bad brought along his posse and they want to beat on you at the same time.

Multiplayer co-op makes Shadow Warrior 2 even more frenetic, allowing up to four players to complete the entirety of the game’s campaign together. But I would not recommend playing co-op on any difficulty lower than Hard, even though it scales according to how many players are in the session. I wouldn’t say the inclusion of co-op is a major selling point of Shadow Warrior 2 – I personally prefer alone time with my Wang – but it’s a welcome addition to the series. You could make a spectator sport out of four ninjas running and gunning against demon hordes thanks to how wild this game can get. 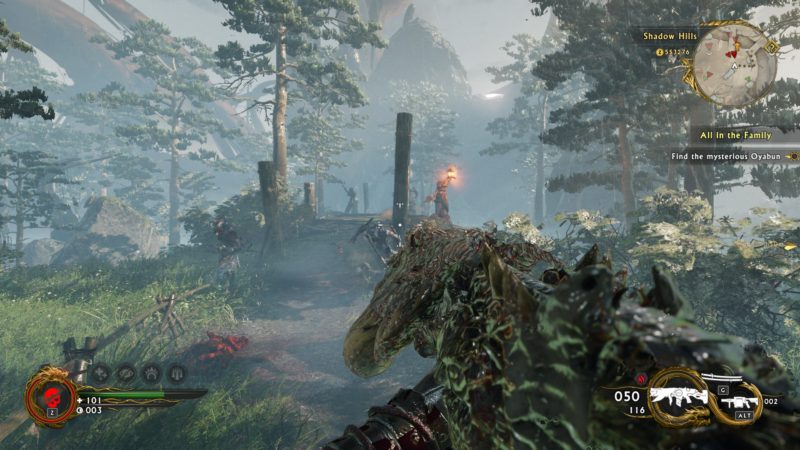 This time around Shadow Warrior 2’s developers opted for environments that are procedurally generated using a large-scale tiling system. While asset re-use isn’t especially egregious as environments are simply gorgeous to behold, Shadow Warrior 2’s level design as a whole isn’t as interesting as its predecessor. I found myself enjoying the progression of the handful of interiors more than exterior environments because they felt more focused and intentional. Mission design has been improved over its predecessor, though, as handy waypoints on the minimap eliminate the obtuse objective finding from the first game.

Story missions and side missions throw Lo Wang into new areas which he can freely teleport from and to from the game’s central hub town. At the hub, you can additionally restock on ammo and shop for new weapons. Once an area has been cleared of missions, they become open for free roaming. Shadow Warrior 2 gives the player more freedom within its world, but it’s a series of moderately sized and thematically different maps. 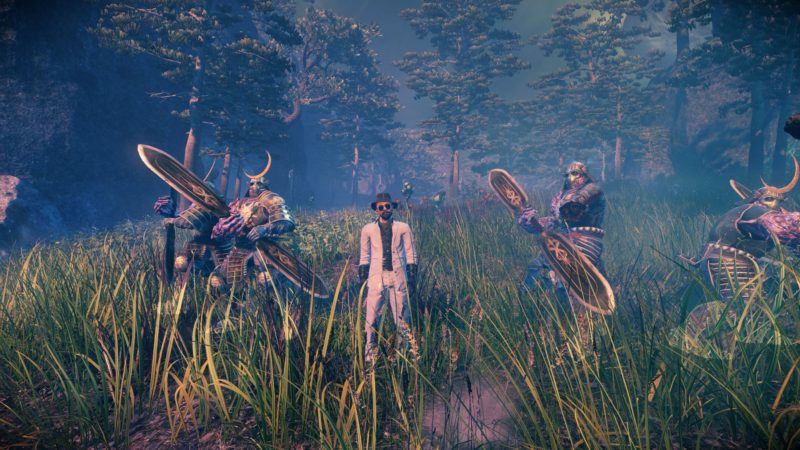 Despite not wowing me as much as the first game did three years ago, Shadow Warrior 2 trumps its predecessor on nearly all counts. The high-intensity action can become a tad mind-numbing over long stretches of time, but it has an addictive quality to it that will last through repeated playthroughs. A healthy serving of enjoyable ultraviolence and gorgeous visuals make Shadow Warrior 2 a rock hard thrill ride.

A review copy of the game was provided by the publisher for PC.