Three years after the original release of Resident Evil 4 for the Nintendo Gamecube, a Wii Edition appeared by mid 2007, along with a bonus within the game including the trailer for a new Resident Evil game in the form of an on-rails shooter called The Umbrella Chronicles. 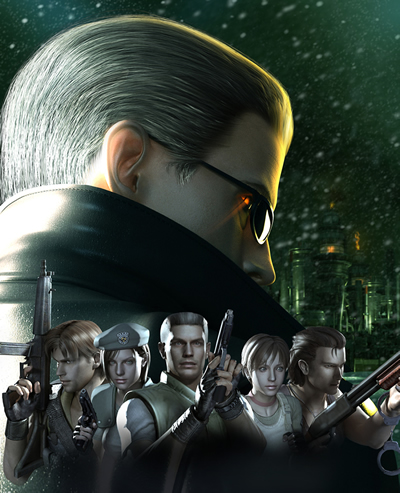 Differing from the known Resident Evil gameplay, this game follows the base of the Survivor series, (First person shooter) but this time it was made as an on-rails experience.
Even though the final product ended up being an on-rails styled game, the original production was following the same gameplay basis as Resident Evil 4 did, but that idea was removed and changed over to an on-rails game.
(Lazy production team anyone? =P)
The reasons for these change were that the “Wii users likes easiness” and that the control of RE 4 was complex, according to Masachika Kawata’s words.
This game’s production delayed the release of Resident Evil 5, due to the fact that most of the team working on RE 5 was working on Umbrella Chronicles at the moment.

The game itself is a retelling of main chapters or entries from the series, going from the settings of the original Resident Evil (remake mostly), Resident Evil Zero, Resident Evil 3: Nemesis, as well for an all knew chapter telling the story of the last fight against the Umbrella corp.

The Wii’s hardware limitation has always been a reason to exclude or port games from the PS 2 to the Wii, and the work on the graphics done by Cavia are really nice to the eye, with very well detailed scenarios, enemies and characters.
The FMV’s of the game have really good quality and are greatly enjoyed, the production team made a great work on the cutscenes.

The soundtrack, composed by Masafumi Takada and Jun Fukuda, features music tracks reworked from past entries of the series and some new ones.
With over 49 tracks, the music catches the action of the game, but the tracks sometimes lacks the horror touch to them, making the game feel more action oriented rather than what made the series renowned.
The voice work on this game is great, though sometimes cheesy, keeps the essence of being there most of the time.

On-rails games have never been the main focus for their gameplay.
The game itself consists of just shooting enemies and some structures or furniture to unlock extras, with the possibility of turning the camera around by some brief frames to look around.
You have quite a vast arsenal to dispose of the various enemies that you encounter throughout the game, from machine guns, magnums and shotguns to grenade and rocket launchers, and even the ability to use grenades at will (if you don’t waste them all of course =P)
Also, the enemies react when being shot at different body parts, and if you aim carefully to their forehead, you can perform a one hit kill shot to zombieS, and if a zombie grabs you, you can perform a counterattack and you can see how your character performs it.
A downward to this is that there is no dismembration other than some head blows, but this can be compensated by the destructive enviroment. As for story related, this game does a good job at retelling the events of past installments of the series into just one game.
Resident Evil Zero, Resident Evil Remake, Resident Evil 3: Nemesis and the new main and subchapters are explained in a good and clear way, even though
some of the main chapters might differ from what the original game story told, this is most notable on the Destruction Of Raccoon City chapter, which has almost nothing to do with the original RE 3: Nemesis.
Beside from the retell of past games, the new chapters filled some plotholes from the series and were a good and nice addition to the main story.
If you are a Wesker fan, you’ll be very pleased as this game contains a lot of his presence and the story is told from Wesker’s point of view.

CONCLUSION:
If you like arcade shooters, you won’t be disappointed at this one, is greatly entertaining and can keep you playing it for quite a while to fully complete it.
The subchapters and new main chapter are awesome, and the files that can be collected explain everything with great detail.
And, if you have a partner to blow heads up, you can play 2 player coop, but you must fulfill certain requirements to do so.