If you were one of those people that didn’t exactly enjoy Lost in Nightmares (I know you’re out there) due to it’s lack of action, then you’ll be pleased to know that Desperate Escape is completely different.

The latest RE5 DLC follows Jill Valentine and Josh Stone as they make their desperate escape (see what I did there?) of the Tricell facility.  This takes place right after the battle in the Monarch Room between Chris, Sheva, Wesker and Jill. Standing in their way is pretty much every regular enemy that you’ve faced in RE:5.

Desperate Escape is just that–you need to get the hell out of Dodge.  This level’s frenetic pace really only slows down a few times during its course and is set to get your adrenaline pumping.  How does it do this you ask?  The enemies just keep coming, a lot like how I figured the main game was supposed to be.  The enemies here are ferocious, kind of like they know you’re leaving and want to stop you. 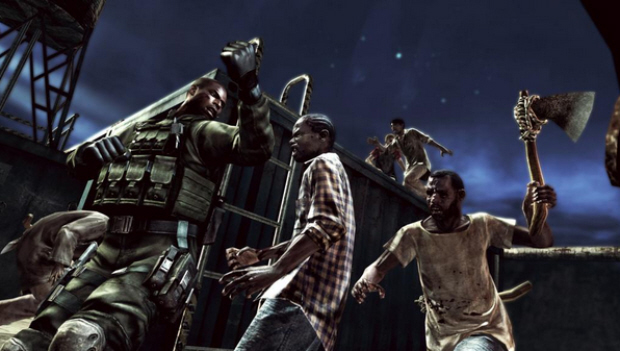 Think of Mercenaries, how the enemies just keep re-appearing.  Be prepared to face off against multiple Chainsaw Majini, Chaingun Majini, Reapers, and countless regular Majini.  Majini with machine guns, Majini with rocket-launchers (irritating as hell), the works.  Often at the same time, too.  Nice.

This level is particularly forgiving in the fact that there are multiple checkpoints in case you should be overcome with enemies.  Overall the level design is fairly straightforward, you won’t get turned around too many times.  The best aspect of this is that even though there are a lot of enemies, the game gives you…more weapons than you’ll ever need.  I completed the level with just a handgun (granted, it was a handgun that I picked up during the course of the level, not the one you start with).  Ammo is plentiful, being dropped by pretty much every enemy, and the Score Stars make a return in Desperate Escape as well.

I’ve played through the DLC three times, and what really gives this DLC a good replay value is that it seems to have the ‘Randomize’ feature.  I was treated to different weapons, different enemies, different locations of herbs.  I could be wrong, and someone please correct me if I am.

You start out playing as Jill, but after you complete it, you can also play as Josh.  Since you can swap weapons, there’s no real benefit, so far as I can see, from playing one or the other. Achievement/Trophy support is also enabled, which makes this an all around good piece of gaming action.

Unfortunately, this DLC isn’t perfect.  The inane chatter that goes on between Josh and Jill, as well as pilot Doug is a little irritating.  The cut scenes interspersed throughout the level are a little too long, and despite how well it would work on the platform, both Desperate Escape and Lost in Nightmares are only available for the Xbox 360 and Playstation 3.  There are really no plans to release this on the PC.

Desperate Escape offers a nice piece of DLC for fans of the game who thought that Lost in Nightmares was a bit too slow for their liking.  However if you’re a traditionalist that doesn’t like the way that the series is headed, then you probably aren’t going to be too pleased with Desperate Escape.