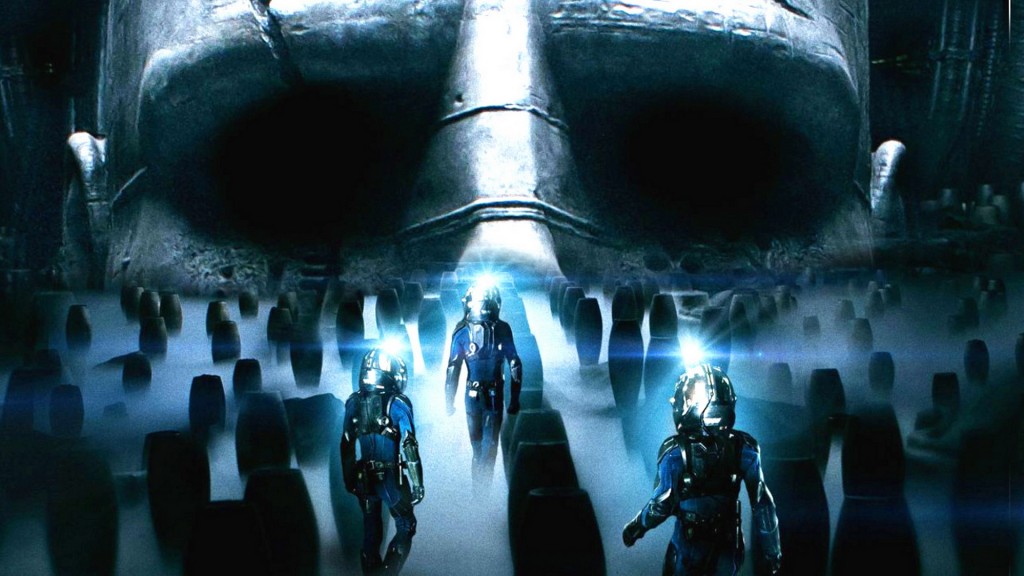 Prometheus is director Ridley Scott’s latest endeavor and marks his return to the genre which many people believe he is most famous for.  Since its announcement, speculation has flown about the film’s ties to the sci-fi classic, Alien. Ridley Scott himself said the film takes place in the Alien universe, but evolved from a direct prequel into something of its own, yet many people believe it is a direct prequel to the first Alien film. Prometheus delivered a truly unique experience and also gave Alien fans plenty of pleasers to keep them entertained, but did it tell the story everyone was hoping for?

One thing can be said for certain: Ridley Scott is a visionary and Prometheus is a testament to that fact.  I chose to see this film in 3D -and I don’t care for this 3D fad America is infatuated with right now, but I highly recommend experiencing it in this fashion.  The spectacle of Ridley Scott and H.R. Giger collaborating is only amplified by the 3D experience as it really helps immerse you into the film and it is visually stunning.  The world created for this film is vibrant and beautiful and Giger’s gothic influence contrasts that with his own dark imaginings which are beautiful on the opposite end of the spectrum.  Fans of the Alien franchise and Giger’s work in general will appreciate the set pieces in this film and will feel refreshed to see them once again on the big screen. The acting in this film is grand as well.  Primarily, the main focus is on Noomi Rapace and Logan Marshall-Green as scientists who make the initial discoveries on Earth that lead them to seek the human race’s creators, or engineers, but Michael Fassbender’s portrayal of David, Peter Weyland’s android “son” easily steals the show with his intrigue and dark nature.  David fits right in with Ash and Bishop from the first two Alien films and really delivers on the aspect of being in the beginning stages of android creation with his stiff movements and constant attempts at acting more human by replicating actions and phrases he hears and sees.  As the film progresses, we see David has his own agendas just as Ash did before (after?) him.

Noomi Rapace is the new protagonist in Ridley’s universe and while her portrayal of Elizabeth Shaw is good, I couldn’t help but compare it to Sigourney Weaver’s Ripley, who is a much stronger character.  Noomi’s emotions were genuine, believable and she was even a little more badass than expected during a certain medical procedure.  Elizabeth Shaw’s antagonist is none other than Charlize Theron who plays Meredith Vickers, a hardened and determined woman that cares little for the expedition she is in charge of.  Vickers is rude yet likeable as she does show some humanity throughout the movie and Charlize can’t help but be incredibly sexy even if she is a bit cold-hearted here.  Aside from these characters and David, the film lacks much development on anyone else in the crew, which is disappointing. Prometheus is not without its flaws. The mythology of the story is a little loose-ended, but that is not necessarily a bad thing.  Personally, being able to interpret things my own way and tie things together without someone holding my hand is something I enjoy; there is plenty of analyzing to go around in this film with sets reminding us of the first Alien film, the return of the Space Jockeys and their easily identifiable ship.  Prometheus brings us on a journey to find out where we as a people come from and also hints at where the Aliens hail from.  Needless to say, it does a stellar (no pun intended) job of it. While not completely explained, those who pay attention should be able to tie up the loose ends or at least enjoy the speculation with fellow fans.  I can, however, understand on some level the disappointment I’ve heard about its story and how it ends.

Prometheus is a grand and beautiful science fiction film that aims to help us understand the origins of one of Hollywood’s most beloved franchises.  It succeeds on multiple levels, although some will be disappointed with the lack of direct answers to some important questions.  Even with some naysayers out there, the film is definitely quite the experience and fits nicely into the Alien universe and will undoubtedly rise to become a classic some time down the road.  It is best experienced in 3D which brings Ridley Scott’s and H.R. Giger’s creations to life in ways thought impossible. Enjoy the spectacle, the acting and characters. Be prepared for a great ride, and please, pay attention.