When talking about Party Hard, comparisons to the popular indie franchise Hotline Miami are impossible to avoid. Both are games about psychopaths enacting brutal massacres to the beat of funky music and bright colors, yet I still feel Party Hard does enough to give this style a touch of its own.

The setup, as narrated to us by a police officer so gruff and gritty that it sounds like he just inhaled a load of gravel, is one that follows a complete nutcase who began invading parties with the intent of killing everybody attending, only because the noise was getting in the way of his naps. This psycho is, naturally, the player character and each level is preceded by a cutscene in which the police officer explains what our next target is going to be.

Each level is another locale in which the player has to murder every NPC present in as gory a way as possible, earning them points and the right to move to the next mission. To do this, you only have one knife and your wits at your disposal, which means that gameplay demands a stealthier approach than in Hotline Miami. If you walk into the center of the level and start stabbing away at the crowd, then inevitably someone will get away, call the cops, and get you arrested, forcing you to restart the whole level. 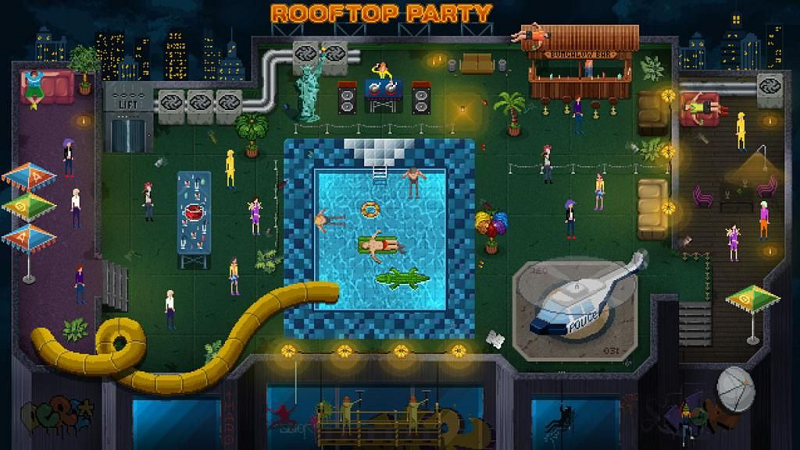 Instead, it’s much wiser to wait for targets to walk away from the crowd, stab them, and then hide the body, but what makes the game work is that this process is very open and allows the player to use a variety of different tactics. You can leave bodies out in the open to scare and scatter the crowd or, with a little craftiness, incriminate another partygoer as the criminal. The game features other playable characters as well that offer different mechanics that can be useful in certain situations.

Environmental hazards are available to make the fun a little more creative. Some are simple and can be used in every level, such as overheating a piece of equipment, and others are unique to certain stages, such as throwing people at a shark while on a boat. While these help the gameplay somewhat, I still feel it can be a little too easy to just wait around a corner and stab everyone that happens on by. It’s not like the AI is particularly smart, so the same tactic works every time.

In its favor, the game makes some attempts at hindering the player from overusing certain exploits. If you repeatedly use shortcuts to evade the police, someone will show up to bolt them shut and they’ll send stronger officers if you manage to kill the regular ones. These are nice touches, but gameplay still quickly turns into a matter of waiting for an NPC to walk away and hunting them down, or just staying near a hazard and throwing everyone that walks past into it, since special kills don’t incriminate you at all. 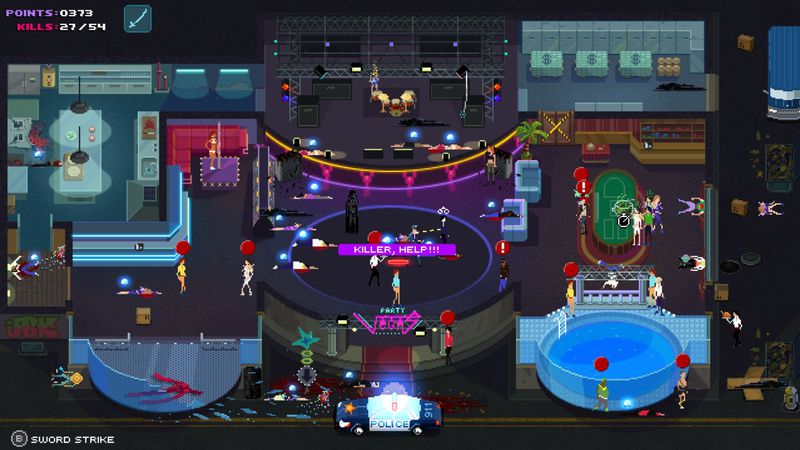 Despite how easy that sounds, I often failed the missions, as dying is just as easy as winning. I often found myself caught in the radius of a hazard I set off myself, which is entirely on me, but at other times NPCs randomly decided they didn’t like my face and began kicking away at me. Because everyone moves faster than you, these bastards got me quite often. The cops are also a little too good at their job and often figured out I was the killer even when I thought I had gotten away with it. Since any failure restarts the whole mission, I found myself tiring of the gameplay even faster.

It doesn’t help either that later levels feel the same as the ones before it. They are only “new” in the sense that they are visually distinct from previous stages and feature different takes on environmental hazards that effectively still do the same exact thing. The game also drags on and it was particularly demotivating when I thought I was on the last mission, only to learn the mission select screen can scroll. At its most blatant, the game will even re-use entire stages you have already played, but change one hazard around. It’s padding at its worst.

And that’s a shame, really, because Party Hard definitely has some clever design behind it. It would have helped tremendously if the gameplay felt more cathartic, since in Hotline Miami you also do the same stuff over and over again, but there you get a spectacle of blood, gore, and synthesized music that come together in an awesome display of stylized violence. Party Hard is isometric and the screen always displays the whole level, forcing the perspective to be zoomed out. The various soon-to-be murder victims all look quite tiny and colorless, so there is not much joy to be found in murdering them.

If this game was playable on a service like Kongregate, then I would definitely have seen some value in it. While in theory it’s long enough to justify the $13 asking price, the time I spent with this game was mostly a frustrating grind of repeating levels over and over again, only to be rewarded with a new level where I do the exact same thing. The gameplay is functional and has some neat touches to it that nevertheless fail to change the fact it’s fundamentally boring and poorly presented.