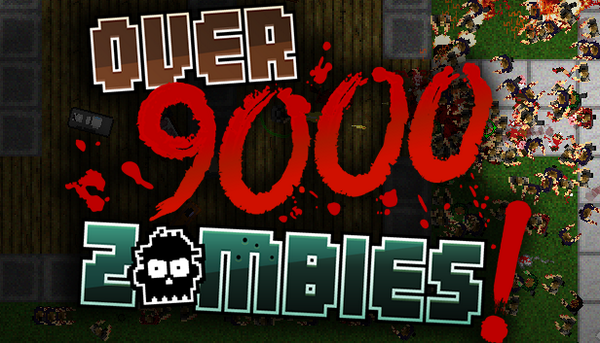 Over 9000 Zombies! is an arcade action game in which you fight against a truly preposterous amount of zombies. While a simple setup like that leaves me with little gameplay or story to talk about, I will say that for $9.99 this game features a ton of content, but leaves a lot to be desired.

The premise of the game is that you are dropped in one of several maps with a single pistol and a lot of zombies. I have yet to see the game actually throw thousands at me, but as far as I generally get in my sessions, the numbers are pretty impressive. You run around, shoot as many as possible and grab the items they drop. These include medkits to restore lost health, grenades to clear out clusters of zombies, and a power-up that gives random effects. You also gain plenty of scrap, which can be invested in the building menu where you can set up blockades and purchase turrets to help you out.

After each wave of enemies, you get about a minute to prepare for the next round and this is where you’ll likely set up the turrets and other defenses. I didn’t find the mechanic very entertaining, however, particularly because it feels like you are rooting yourself to one point and aside from a few explosion-based models, all the turrets really do is take off the edge for you. Even when a decent base does start to form, enemies can still spawn right in the middle of it and some zombie types can quickly level even the strongest of forts. All in all, the game is more fun when you take the run & gun approach. 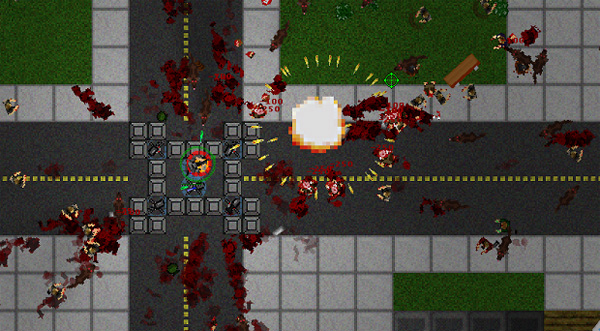 The overarching goal of the game is to survive as long as possible and I must say that after a challenging session, I was often excited enough to immediately jump back in after dying, which is clearly the desired effect. There are leaderboards in place (in which I generally ranked pathetically low) and a tech tree that decides what weapons you unlock after making a certain amount of kills with previously-available models, further encouraging experimentation with different play-styles. However, the presentation often discouraged me from continuing.

The game utilizes a pixelated art-style viewed from a top-down perspective, so visually it’s not that impressive, but not too offensive either. My main issue is that all the sprites are incredibly tiny in order to accommodate the large numbers and I often lost track of which one I was controlling when things got messy. I also found myself staring intently at the screen in order to keep up and there is this annoying flickering-effect that, combined with the droning sound of constant gunfire, made the game downright headache-inducing to play for more than a few minutes. 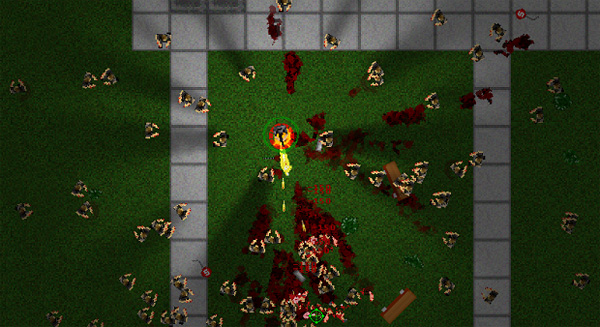 While the level editor and multiplayer functionality, as well as the aforementioned weapon tree and building mechanics, help elevate the game beyond something you’d expect on a site for flash games, I really can’t describe the game as anything more than a fun time-waster. I could see myself playing it for a bit on a train ride or while waiting for something else, but I have a ton of mobile games that could be used for the same purpose and taking out a smartphone is a lot more comfortable (and socially-acceptable) than my admittedly-bulky gaming laptop. Add to that the fact it’s physically uncomfortable to play due to the eyestrain and I feel pretty safe in saying this game can be passed on.