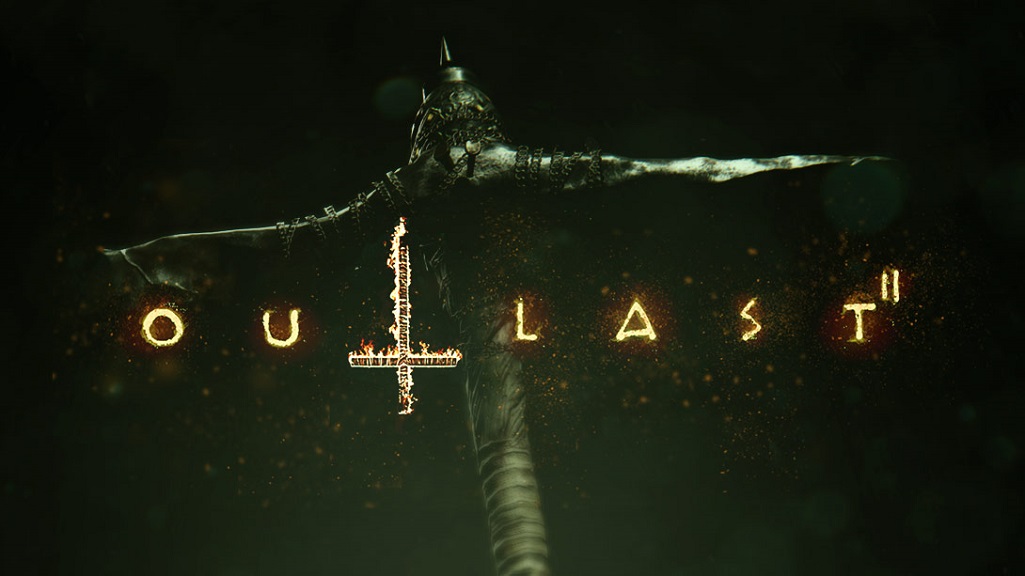 After years of waiting, the day is finally upon us. Red Barrels’ sequel to the infamously gruesome Outlast – a chase-oriented horror game that focused on a “found footage” aesthetic using a night-vision enabled camera – is finally hitting store shelves. I loved the original game and was eager to sink waist-deep into the blood of this universe again. What did I think of its sequel? Well, it’s one of the most perplexing mixed bags I’ve encountered in a while.

Outlast 2 is good, let me get that out of the way. It is a good game and I enjoyed my time playing it. It’s stunningly gorgeous to look at, and the environments may be some of the most heavily detailed and painstakingly crafted this side of Resident Evil Remake – but it is also a very confused (and consequently confusing) game that has too many strange decisions to ignore. Outlast 2 suffers from what I can only imagine is a change in direction midway through development – a shift that almost totally abandoned what the first half of the game was trying to do. Interestingly enough, when I was readying up to review Resident Evil 7 a few months ago, one of the primary concerns from fans was that the series was losing its identity by taking too much inspiration from other popular horror games. I’ll be damned if that’s not more or less exactly what Outlast 2’s problem is. 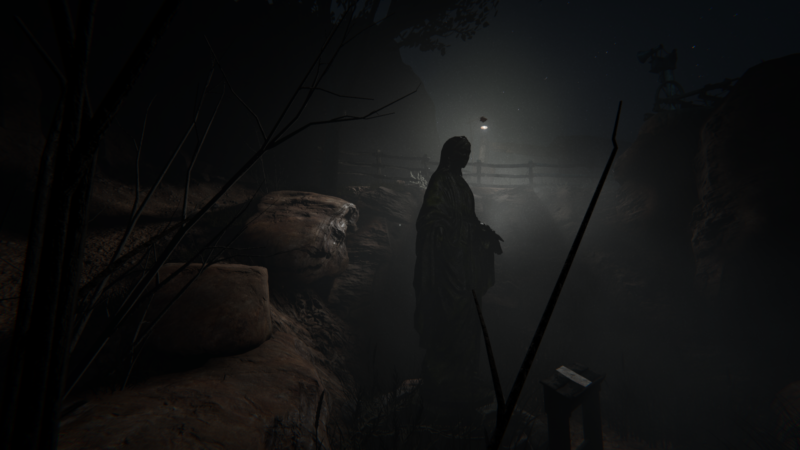 We play as cameraman Blake Langermann who, along with his investigative journalist wife Lynn, rents a helicopter to fly over a region where a young pregnant woman was murdered. Searching for answers to the mysterious circumstances of her death, the crew’s helicopter experiences unexpected technical issues and crashes directly into the heart of the area they were investigating. Waking up in a sea of flames, Blake discovers that his wife is nowhere to be found near the wreckage of the downed helicopter. Injured, panicked, and with nothing at his side but his night-vision enabled camera, Blake sets off into the night to find his wife in potentially hostile territory. What he finds instead is a brutal, sex-obsessed religious cult, who have no qualms about murdering children en masse and raping women. It’s a great place to start the story, feeling instantly fresh but also familiar to the opening of the original game, with the added drive to go deeper into the nightmare to find Lynn, rather than just happening upon answers like the original game’s protagonist, Miles Upshur.

While settling myself in for another panic-inducing, sprint-filled journey through hell, I was surprised to discover quite a few additions to the Outlast formula. While the original game had little more to do than run, film, and push buttons to start mechanical equipment, Outlast 2 makes a conscious effort to “gamify” itself. Many new ways of hiding, running through obstacles, and buying yourself time by locking doors behind yourself take center stage as we try to escape from the newer, smarter enemies. Taking damage no longer fixes itself after a few seconds, meaning maintaining a supply of healing bandages that are scattered about the environment. The video camera has been upgraded quite a bit, with a new directional microphone attachment that drains battery life just like the night vision mode (having both on at the same time with suck your batteries dry in seconds). Keeping the camera trained on key moments in the story actually records them this time, allowing you to look back over the footage on the camera itself as Blake gives commentary. Environmental puzzles are more significant too, incorporating tried and true “find these things to interact with that thing” game design as well as old-school obstacle pushing to reach new areas. 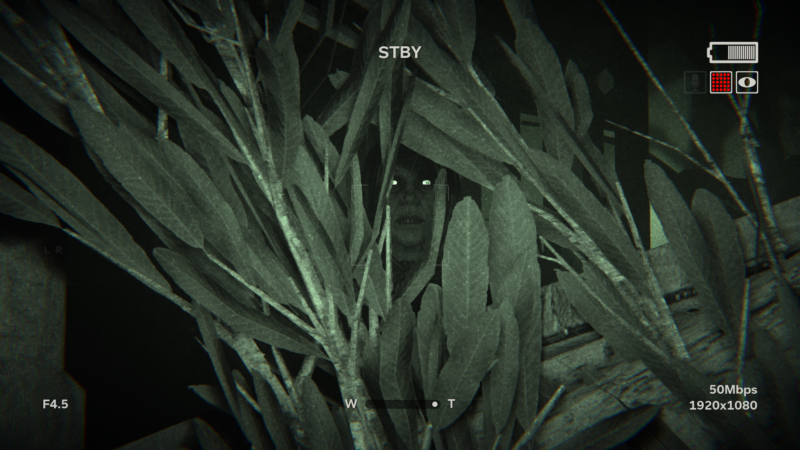 Outlast 2 makes a concentrated effort to join the ranks of “traditional” survival horror games and step back from the purely chase-based horror genre (populated by the likes of Amnesia, Slender, and many more indies on Steam). It works in some places and doesn’t in others. For starters, the scale of Outlast 2’s environments diverges from the original games’ endless hallways, often leading to more open-ended areas with lots of options for where to run and hide – in theory.

Despite a change in scope that aims to evolve the Outlast formula, the enemy AI pathfinding and spawning often make traversing these areas very trial and error, requiring multiple reloads to get through to find the “correct” path that Red Barrels set out for us. It’s frustrating and often feels cheap. This is especially apparent with one of the new named enemies: a witchy woman with an enormous pickaxe, who often spawns directly ahead of the player on a path, can kill with a single, devastating hit. This all feels very much like it’s just negating the point of having the areas be so open when usually only one path out of dozens allows you to progress. Because of this fatigue sets in very quickly.

Interestingly, these open-ended areas sort of just stop midway through the game, replaced by mostly linear chase sequences again. This brings me back to my original theory: Outlast 2 feels like development shifted in an entirely different direction midway through development. The first few hours try to one-up the gameplay and direction of the original game, with the addition of a few true supernatural elements and more open-ended “gamey” design. The second half feels almost entirely different, shifting suddenly into a full-on Lovecraftian nightmare, replacing the open-ended design for more or less the original games chase design, which results in ditching the need for almost all of the mechanics built up in the first half. I didn’t need to hide after a certain point in the game; later game level design stopped giving me a reason to use the directional microphone, and puzzles suddenly reverted to locating buttons to open passages or turn things on / off. 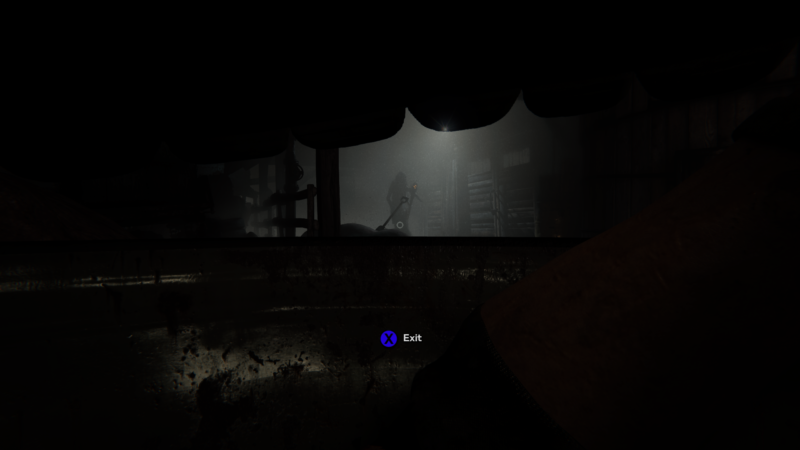 Even stranger, the first and second halves of the game’s story (not just linearly as they’re intertwined) have almost nothing to do with each other. There’s what I can only describe as “Otherworld” sequences which begin the game as seemingly complementary to the main plot, but then it suddenly takes over the story midway through the game. This results in characters and plot threads from the first half more or less disappearing entirely for hours of the game, until suddenly reappearing at the game’s finale as if they had been there the whole time. It ends up feeling very confusing, and I genuinely have no idea what’s happening after a certain point. It becomes such a mess.

It’s a real shame too, especially seeing as one of the two plot threads the game works with is engrossing. It’s genuinely terrifying and takes place in an eerily normal location: a grade school. The school and the creature which possesses it overshadows what’s intended to be the “true” plot and setting of Outlast 2 by a mile. It has me wondering if perhaps the series is simply better off set in urban environments. Every time the game would leave the more citified location I could feel the tension draining back out of me. It’s a real shame because I honestly am creeped out by farmlands and backward religious extremism, but in the case of Outlast 2, it simply isn’t as exciting or creative as the school “otherworld.”

The genuinely frightening and charismatic villain writing of the original game is regrettably absent as a whole in Outlast’s sequel as well. The Groom, Trager, even the Walrider all had personality to them that made them stick with the fanbase. Trager and The Groom especially were deliciously demented and quotable, and together they formed the identity of Mount Massive Asylum. Even the named baddies in Outlast 2 can only ever be charitably described as “the cast of The Hills Have Eyes remake.” At the very least I will say that the literal character and creature design is incredible, with one entity, in particular, being almost painful to look at (no joke, it’s like a living version of the double-faced corpse from THE THING); it’s so disturbing. That said, the story-based characterizations of these monsters are lacking to the point of becoming generic. 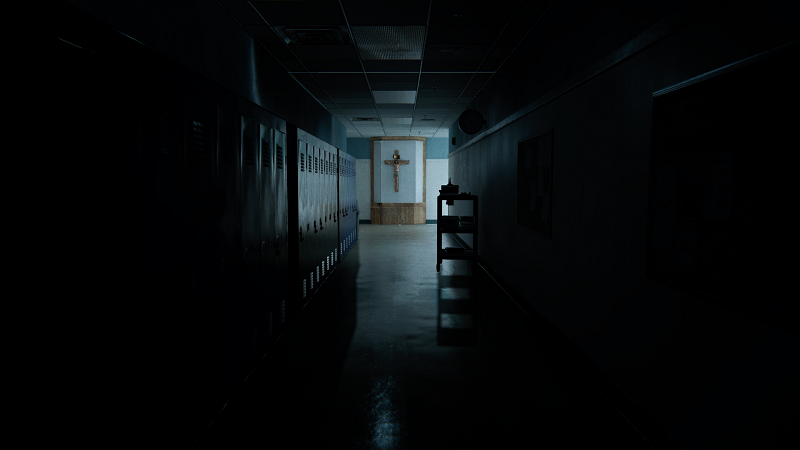 To top off all these curiosities, Outlast 2 is bizarrely derivative of other horror properties. While send-ups and even comical quote drops aren’t alien to even some of my very favorite games ever, Outlast 2 seems to simply borrow whole sequences from other horror games and movies, most notably Silent Hill 2, Resident Evil 4, Nightmare on Elm Street and BioShock. It’s distracting and makes the whole experience feel kind of… desperate to be honest. One moment, in particular, is so blatantly stolen from Silent Hill 2 that I want just to spoil it here, but there’s no chance you won’t notice it if you’ve played that game. There’s also a few mechanics “borrowed” from other games, the most jarring one being Alone in the Dark 5’s whole inventory system, mostly unchanged save for the lack of combining items. I’d call it brave for any studio try and take inspiration from Alone in the Dark 5 (which is generally regarded as being near unplayable and terrible), but again, it mostly feels distracting and can easily be ignored in favor of hotkey item usage.

Again, I enjoyed my time as a whole with Outlast 2, but the amount of mechanics and story elements that come and go, combined with all the excessive references to other horror properties mostly makes it feel like anything but Outlast 1. These oddities could almost be seen as overcompensation for criticisms of the original game. Were the chase sequences repetitive? Turn them into something that has dozens of potential outcomes (nevermind that all but one are game overs). Lack of Mechanics and things to do? Add tons of stuff that don’t especially improve or notably change the core mechanics. The original game’s story turned out to be really straightforward science fiction stuff? Outlast 2’s story is gibbering supernatural nonsense with an ending that seems only to make everything even more confusing (especially seeing as it was confirmed to be taking place in the same universe as the original game). 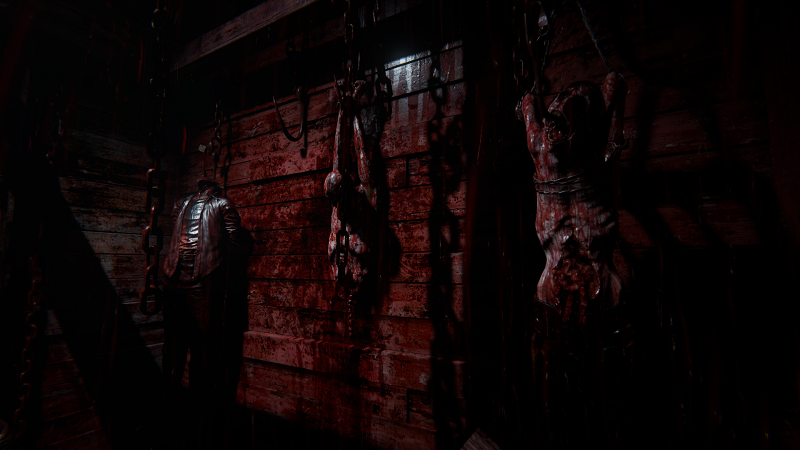 If you’re looking for a good, blood-soaked (oh yeah, the blood might be the best blood I’ve ever seen in a game) Halloweenie time, Outlast 2 is great. It strikes a lot of chords for me and my love of the goriest Halloween decoration brand of horror. It’s also genuinely frightening; it is one of the scariest games I’ve played, and regardless of questionable writing or mechanics, Red Barrels are still clearly masters of a good scare. As a cohesive, well-rounded sequel to the original game, however, it misses the target on so many occasions it’s hard to feel satisfied with this as the return to the franchise. Sometimes, it’s possible to overdo it when you’re trying to innovate. Outlast 2 tried so hard it forgot what it was doing and ended up in someone else’s backyard.

PC and Xbox One review code were provided by the publisher. Outlast 2 is also available on PlayStation 4