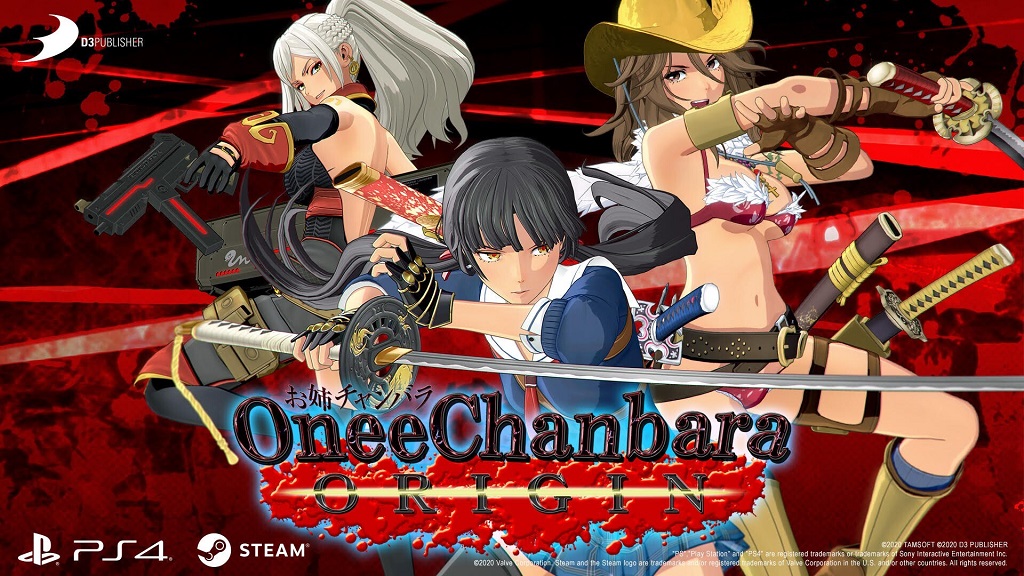 In 2004, D3 Publisher released the very first Oneechanbara game on PlayStation 2 in Japan, starting off a long-running series of games and media that has never been represented very well in the West. Even though only three of the series’ twelve games came to North America, it enjoys a strong cult following to this day.

The series also spawned two feature films which prominently feature its busty, scantily clad, weapon-wielding half-vampire sisters fighting legions of zombies and monsters. The eccentric series is known for its crazy, over-the-top action, violence, gore as well as its “chanbara” samurai and horror tropes all rolled into one.

The original 2004 game and its 2005 sequel became legendary low-budget classics in Japan, and 2020’s new entry to the series, OneeChanbara Origin, is a remake/re-telling of those original two PS2 games. Completely revamped for modern platforms, this new version features improved visuals, sound, controls, story and more. 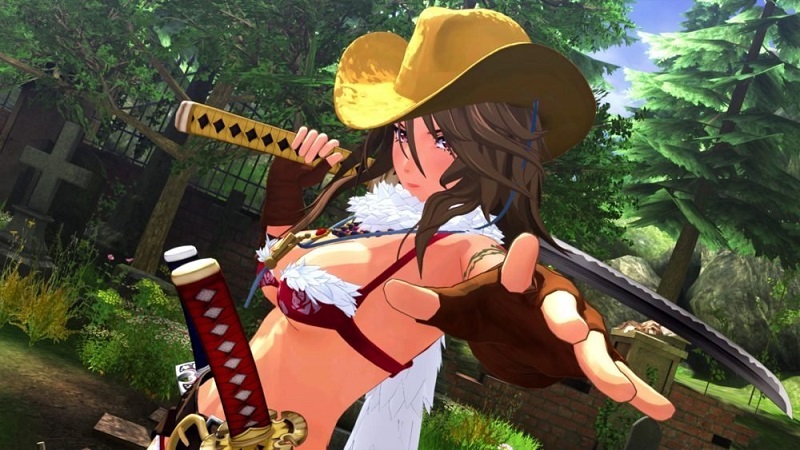 OneeChanbara Origin starts off with a bang right out of the gate, thrusting you right back into the opening scene from the original 2004 game and showing off its new visuals and combat systems in the process.

It begins in a cemetery where Aya is visiting her mother’s grave, when suddenly zombies start rising from the ground, forcing her to fight her way out. The difference in how smooth the game looks and plays is immediately evident. Gone are the clunky controls, broken camera, and lack of combat flow, replaced with a new and refined system that is much better at keeping the action flowing and making the player feel in control of every situation.

Many of the elements from the combat systems of the later games in the series are also featured here, including a dodge/evade system, brand new parry system, fully controllable camera, proper map/navigation system, the “ecstasy gauge” special attack system, and the super-berserk mode from OneeChanbara Z2 as well. 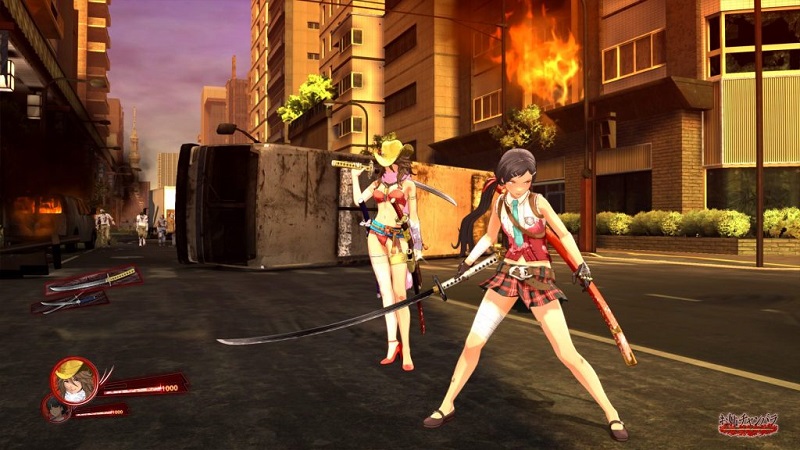 While the later games before Origin (especially Z2) improved the combat system so much they easily stand in my top hack n’slash action games of all time, Origin decided to keep things a little more toned down and closer to the original combat system of the PS2 games. I definitely understand the decision, even if I do miss some of the later upgrades when playing OneeChanbara Origin.

In the visuals department, things have been re-imagined with a strong cel-shaded anime art style that fits the series very well. The style ditches some of the oddly realistic textures and models from the previous games, and the change helps the game stand out from the rest of the series. The characters and environments look gorgeous, and the game overall has a much more colorful look throughout when compared to the drab and dark environments of the originals.

The combat and gore are highly satisfying in every way, with blood and viscera flying all over the screen and the characters in real-time. It’s some of the best effects the series has ever seen. 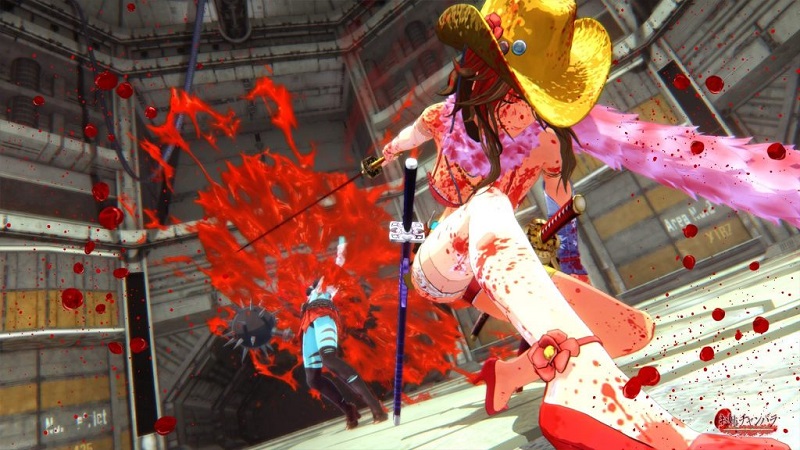 OneeChanbara Origin also re-tools the story of the first two games into something fairly different, mostly for the better. It also features proper voice acting for all the characters, something notably lacking in the earlier Onechanbara games. Not only has the story been re-tooled, it’s also been condensed, with a few main characters and plot points completely changed. Both games are now presented as one continuous experience, instead of being able to choose separately between playing the first or the second game.

This change in the structure of the game also helps keep the pacing going very quickly, which is a big improvement over the early games. There are very few segments of just running around with nothing to do, and almost always a battle to be had in most areas, keeping the action going at all times.

A lot more story exposition is included here, including sub-plots with clones and other wackiness, as well as a much more fleshed-out narrative that includes Aya and Saki’s parents as the main storyline. While most of the story includes fairly silly anime tropes, it’s largely what’s expected from the series. OneeChanbara has never taken itself too seriously and presents itself with a very campy and tongue-in-cheek feel. Some of the cutscenes drag on a little bit, but they are all skippable if you just want to get back to the action. Having said that, I still suggest watching them at least once just to see how everything has been updated. 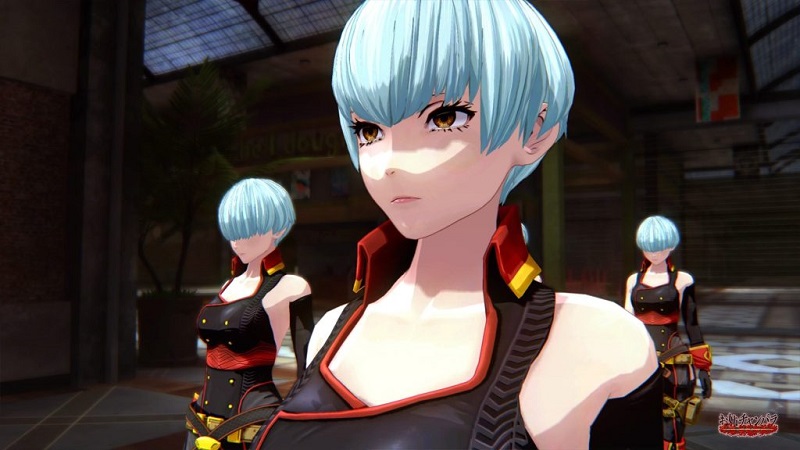 By combining both games into one continuous campaign, it does end up making things feel a little bit short overall, as some parts or levels from the original games are shortened or removed. The developer also didn’t include some of the extra content and characters from the “expanded” versions of the games that were later released on PS2. On a first playthrough, Origin is around 5-7 hours to get through, if you watch all the story and get through the learning curve of the combat. Though on repeat plays (when you’re able to level up characters and skip cutscenes), repeat plays can easily be crunched down to around 3 hours with a little effort.

Even though some things from the original games are missing here, OneeChanbara Origin also adds quite a few new battles and bosses that were not in the original games, so it evens out well. It would’ve have been nice to have all the old content with the new, but that’s just not how they chose to approach this project.

Despite the length (like many games of this type), one of the main draws comes from playing the campaign again on higher difficulties to unlock more features and challenge yourself. As a result, the length of the game varies depending on what you’re looking for from the experience. 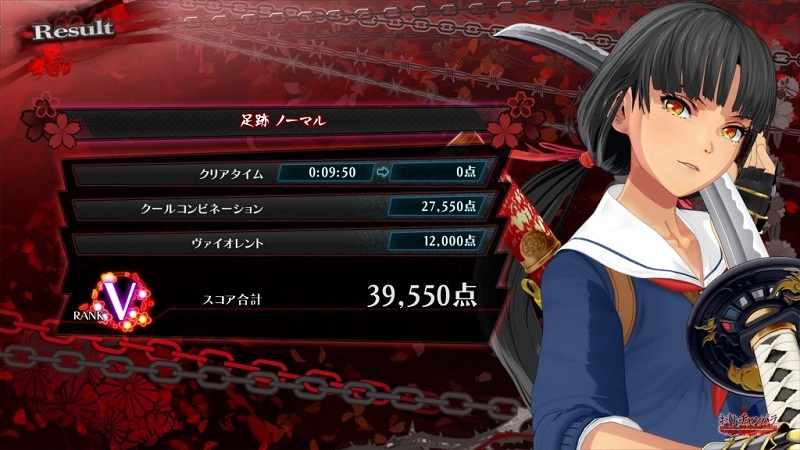 As previously discussed, the voice acting has been updated and is now much more robust than in the early OneeChanbara games, helping the characters feel like more than one-dimensional avatars that chop up zombies. Though the acting and writing’s not Shakespeare by any means, it falls nicely into the silly-but-enjoyable anime trope realm.

The sound effects are well done and make every hit and movement satisfying. They also provide audio cues for attacks, which can help with parrying and dodging, and even give you audio indicators for the timing of the ever-elusive Cool Combos that have been a staple of the series.

Many of the sound effects have been updated or are brand new for this game. The developer has also kept some of the classic sound effects that fans associate with the Onechanbara series, which is a nice nod to the original games. 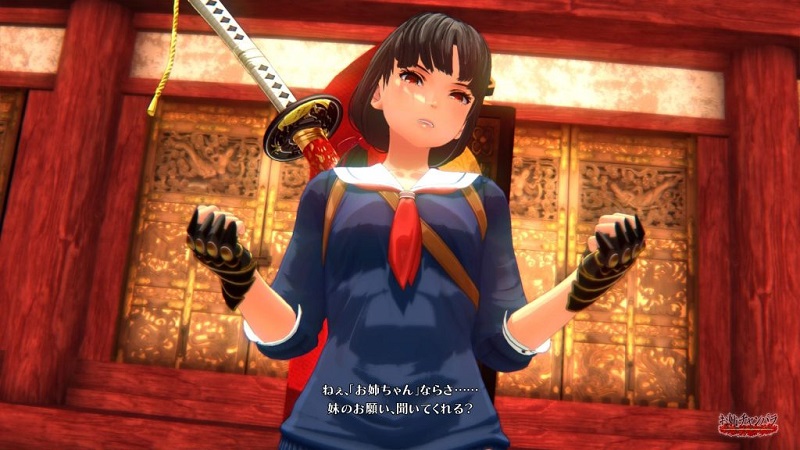 As far as the music goes, everything is a success and follows the trend of the series. The music is often one of my favorite parts of this series, and what’s featured here does not disappoint. Origin mostly remixes and updates arrangements of the songs from the PS2 games, but also features two brand new vocal tracks that are a great addition to the soundtrack.

These new songs are inserted as the background music that plays during certain sections and battles of the game. They really amp up the feeling of power and action when they’re blasting during a battle. As an added bonus, after clearing the game, you unlock the ability to customize the soundtrack and choose which songs play during any given event, so you can hear that much more of any of the songs you really like. 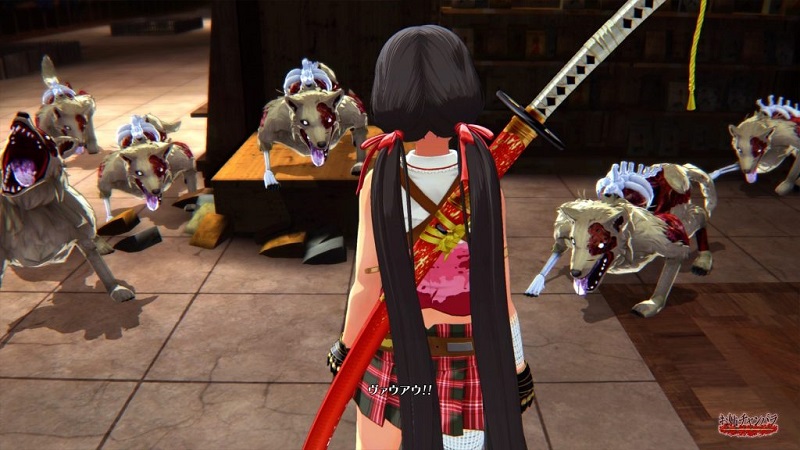 Besides the main campaign, there’s also an extra survival mode included, which puts you in a series of arena stages that keep increasing in difficulty to see how long you can survive. After 50 stages, the mode kicks the difficulty level up and starts repeating the stages. Even when your characters and skills are maxed out, it can be very challenging. The mode also adds some decent replayability and lets you use other unlockable characters besides Aya and Saki.

Additionally, there are 10 cheap DLC missions available for purchase that are all short arena battles, similar to the survival mode. They’re perfect for players wanting to sink their teeth into more content, after they’re done with all the rest. 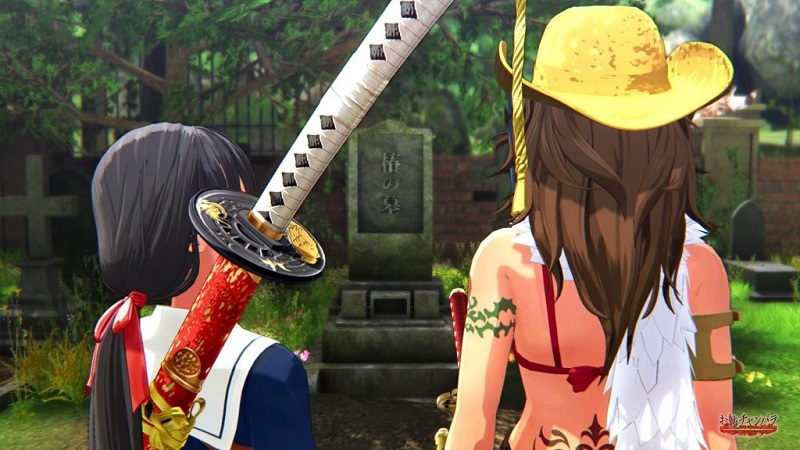 The new PC version is the first time the game has been released in the West after its original release on PS4 in Japan a year ago, and with it comes a few upgrades and extra options.

The PC version also offers slightly better performance than its console counterpart (obviously, this varies depending on the power of your PC). It doesn’t let you go too in-depth with customization but has separate options for all the usual visual upgrades and bonus options that PC versions of games usually have. The framerate stays pretty steady most of the time, with only a few dips here and there, but otherwise, the technical performance is solid even on a fairly average-powered PC.

Origin is also now available digitally on PS4 in the West, but there aren’t any upgrades or changes besides the translation and English dub. The PS4 version has a slightly more solid experience than on PC, as far as stability goes, due to the obvious lack of hardware variety, but they’re largely identical otherwise. 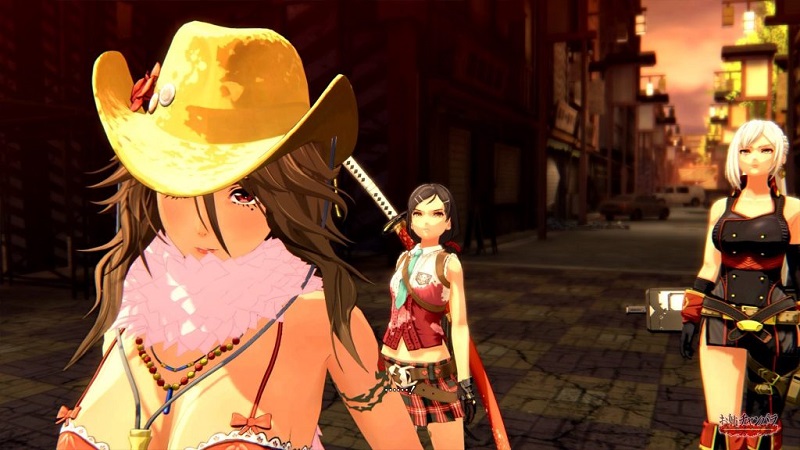 OneeChanbara Origin is a great update to the original games. While it’s not entirely a replacement for experiencing the originals, it tells a more compelling story and offers a huge host of updates to improve your gaming experience for 2020 standards. Whether you’ve played the originals or not, Origin is a great entry to a fun and expansive series that could easily springboard you into other OneeChanbara games (my personal recommendations are the Xbox 360 titles and Z2.)

If you’re someone who only wants a 20+ hour RPG-like campaign experience, this may not really be for you. But for those who embrace Japanese-style action games that warrant multiple play-throughs to improve skill and challenge yourself, like Devil May Cry or Bayonetta, then this title will definitely satisfy you.

I hope everyone gets a chance to check out the series if you haven’t yet. Coming from a long-time fan, OneeChanbara Origin captures the heart of what the series is all about and wraps it all up in a great modern package.

A Steam review code was provided by the publisher.