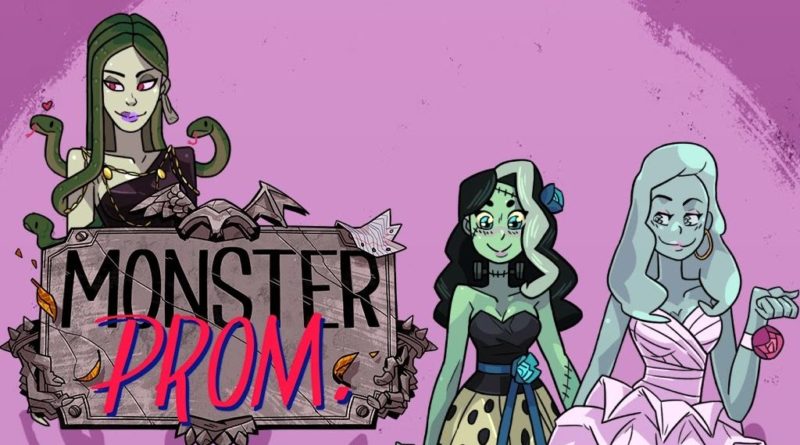 Monster Prom is at no point scary,  nor is it going to make you fear for your safety or plunge you into an introspective dread where you feel as if the game is playing you more than you’re playing the game. But that doesn’t matter. It’s fun, and it has monsters and stuff in it. That’s good enough. And some of the implications of what these characters do for kicks is super messed up if I’m honest. There we go; Scary. If you walk in the realms of horror and indulge in charming, wholesome media on occasion (because you’re actually a big softy), then continue on.

Monster Prom is a kickstarted game from a new indie studio called Beautiful Glitch, and in the spirit of games like Dream Daddy and Hatoful Boyfriend, it’s a comedy-based dating sim. The gimmick that makes this game stand out is that it’s themed around everyone being a type of mystical and/or pop-culture monster. Werewolves, vampires, zombies, hipsters, they’ve got all the horror bases covered. As the player, we can pick from one of four characters, each a monster themselves (as opposed to say, Hatoful Boyfriend where you’re a normal human girl in a school for pigeons), to pursue one of Spooky High’s most popular (or in this case, hateful) students. All of the characters, male or female, are available for asking to prom, but it’s up to you to level up your traits and ingratiate yourself with the monster of your dreams before they’ll even consider being your date.

To get into your heart-throbs’ good graces, you answer a quick questionnaire at the start that establishes your stats (smarts, boldness, creativity, charm, fun, and money) and then are let loose on the student body to either rise on your way to become prom king/queen, or doom yourself to a future of mediocrity because you didn’t get to go to prom. Each of the potential dates has individual likes and dislikes, and how much they like you is based on both your stats and how awesome they find you when interacting with them on an individual basis. Each ‘day’ consists of visiting a location on campus (each rewarding a set amount of points to a specific stat) and then interacting with your monster crush, eventually leading to you having to solve a problem with a choice between two options. Occasionally, there will be other monsters hanging out with your boo (heh), and your choice can tip you towards one or the other. 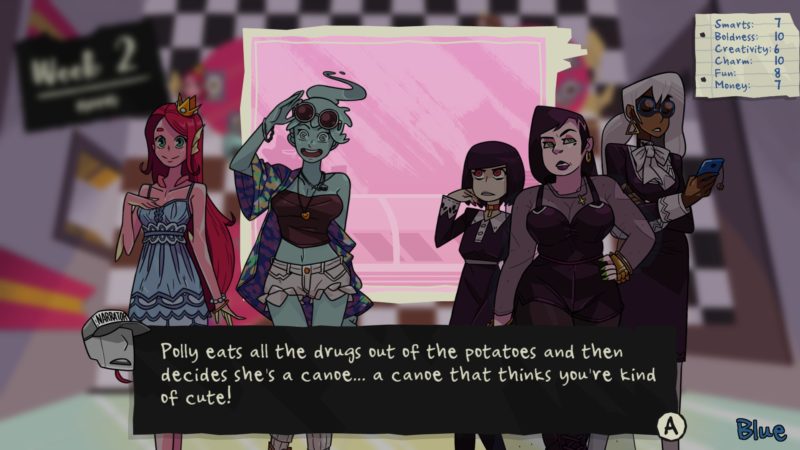 The choices themselves are absolutely insane every single time. It is impressively consistent how funny the dialogue and player choices are, although, the sheer weirdness of these situations often makes it very difficult to tell what exactly will win you points with your intended date. Once I was offered the choice of presenting my grandmother’s engagement ring with my grandmother’s corpse still attached to it, or simply puking bees everywhere. Sometimes you just don’t have the right stats to pull off a choice effectively, leading to even more confusion on repeat playthroughs. Obviously, the game is designed to be played multiple times, so nothing is really lost when you mess up (I even restarted once just because of how deep I’d sunk myself with my dream ghostie-girl, Polly). Restarting might sound like a lot of work is being lost, but it really isn’t because of how short a single playthrough is.

You can either play a quick game (about 30 minutes) or a full game (about 60) from the get-go, so an entire play-through is just one sitting. Between the two types, the only thing that really changes is just how many days there are until prom, allowing you more or less time to level up your stats. I wouldn’t say that either one is more difficult than the other, as you can accomplish your goal regardless, it’s just that there are more situations in the longer version. Occasionally situations can even have multiple parts, coming back to haunt you days after an initial decision. You can also purchase items from a snooty cat girl, with each one offering its own scenario and choice that nets you some bonus points (or removes points instantly). Some items can be used to earn specific endings as well. 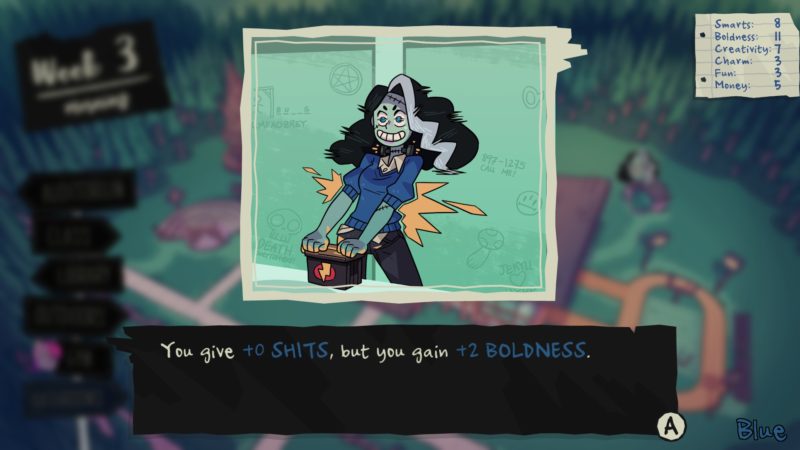 Even better, you can play this with up to three friends (local or online), competing to win the heart of your date to be. I’ve… actually never heard of a multiplayer dating sim, so maybe this is a first? The game instantly becomes even more fun when playing together as the comedy really soars thanks to seeing friends reacting to just how absurd it all is. Monster Prom encourages playing as oddly as you can for the sake of comedy or to annoy other players. Playing with friends doesn’t change much in terms of the game admittedly, as each player takes a round to pursue their own events and choices. What ultimately matters is that if each player is going after the same monster, one of them isn’t going to prom.

Admittedly, this all ends up meaning that the gameplay is largely just a framing for getting more humor at the player, so don’t go in expecting a deep or rewarding dating sim. This absolutely is not that. The endings are satisfying in their own ways and secret endings that get even crazier, (with more than one end resulting in you and your beasty having explosively kinky sex [off screen]), but the real draw is mostly just… experiencing the world. The humor of Monster Prom is very much ‘millennial’ in style, describing it as ‘random’ or ‘memetic’ fits the bill, making pop culture jabs and comments on gaming and dating sims in general. Some of the humor might not hold up too well because of how timely some of it is (mocking early access gaming, Instagram filters, etc) but it feels on the button for now. That said, each of the characters is charming and the humor feels self-aware enough that it often undercuts mocking something with mocking its own mockery. One moment that involves a joke about feminism, for instance, feels almost like it can be taken as both pro and anti, praising the player for having enlightened views on gender, while those views are that women should poison men. 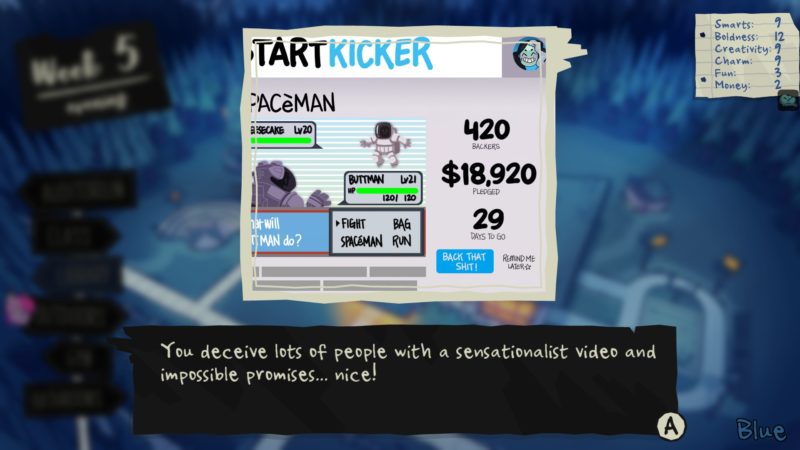 The art is also, simply put, fabulous. Every character (even the player character, who is only seen in a handful of area-specific art) is so charmingly designed and distinct that I’d honestly be totally up for a comic series about these monsters. Even more surprising is that the characters can change costumes and appear with different looks each day (nothing too crazy, but visiting the auditorium, for instance, shows characters in a variety of gaming outfits, for instance). Each character has a variety of expressions and poses, as well as fun event-specific artwork that gives them each a ton of personality to compliment their witty dialogue. If you’re a fan of things like Scott Pilgrim (the comic, not the movie), Stephen Universe, or the works of Jhonen Vasquez (JTHM, Invader Zim, I Feel Sick) then you’ll probably like the way this looks and feels too. The music is also fun, occupying the same 60s surf rock that made games like Stubbs the Zombie such a fan favorite.

Overall, I don’t have much more to say other than it’s just a really good time. Monster Prom might not offer the deepest dating sim experience you could be looking for, and I occasionally felt a little cheated by just how off the wall the choices were (between putting a corpse on your head and putting a brand label on it — how in exactly the fuck am I supposed to know which will be the better option?). That said, the humor and charm are enough to keep me playing to get to spend more time in this world. I love the little blue Frankenstein girl I chose to play as, and I’m absolutely going to come back to this game often just to laugh and smile at the weirdness of it all. Its like a great cartoon series that happens to be a game instead.

A review copy of the game was provided by the publisher for Steam.