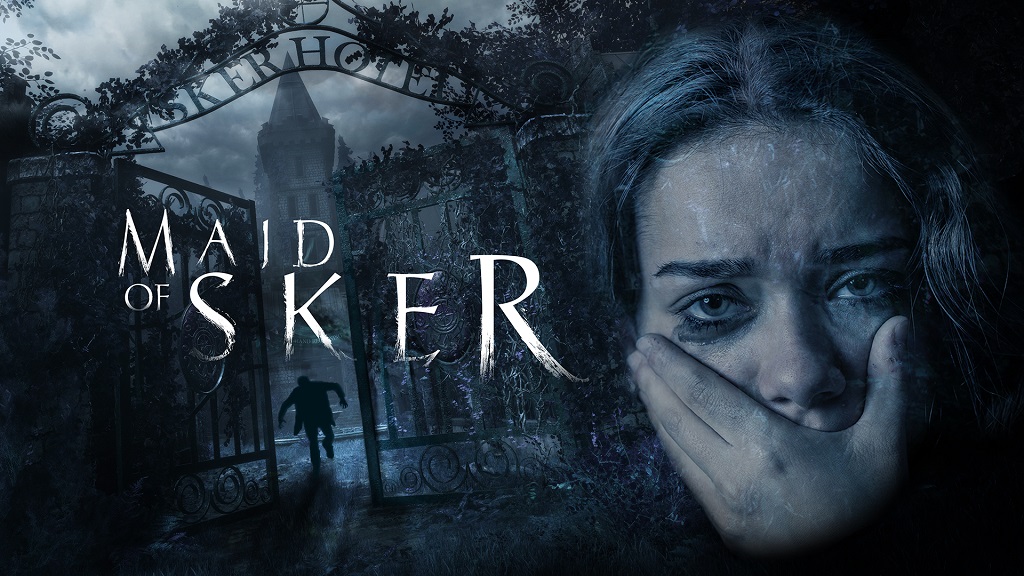 Originally announced in 2018, Maid of Sker, the newest project from UK developer Wales Interactive (Don’t Knock Twice, The Bunker) has finally arrived. From the beginning, this project looked to be a very interesting one, with its promise of bringing old Welsh folk tales to life by using real-life locations and stories from the area of Wales. By incorporating many key aspects of popular horror games into an immersive experience with story elements from the Victorian novel of the same name and local traditions, the developers set out to create a true survival horror game that wasn’t quite like anything they’d tackled before. 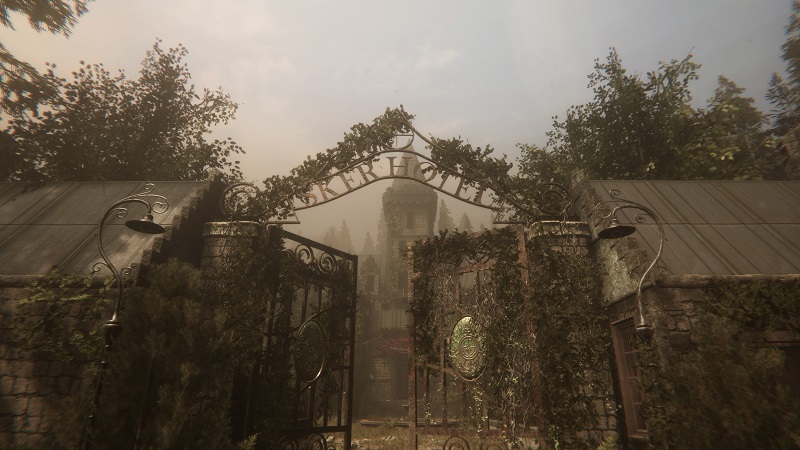 Maid of Sker starts with a short cutscene showing that you play from the perspective of a music composer who receives a letter from a girl he knows and loves, named Elizabeth Williams. As a resident of the famous Sker House, Elizabeth channels the real-life legends of the area; her letter says that she has been trapped inside the house and needs your help.

Your journey begins with your train arriving at the station of Sker Hotel. As you start to explore the area for yourself and get accustomed to the controls, one of the first things you’ll notice is the gorgeous visual presentation of the game. Even before you step off the train, you can see the meticulous detail in every wall and object of the train itself. Once you step outside, you’re greeted with a lush late-1800s version of Wales, with beautiful forests, water, and architecture at every turn. Everything has a luscious, detailed look that borders on uncanny at times, with how close to real life it can look in some aspects. 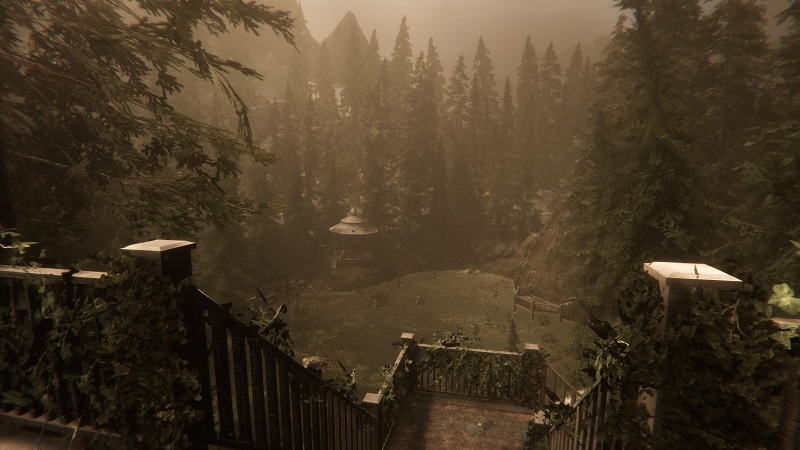 Maid of Sker features one of the best uses of a first-person perspective I’ve come across in a horror game in some time. It doesn’t feel like a lifeless, run-of-the-mill experience that’s just waiting to throw jump-scares at you with its limited field of view, but rather a genuine window into a unique, living world around you. Every hallway, room, and area feels unique and different from the last one you visited, each with something new to see. Instead of copy-and-pasted rooms or random assets littered around the map, there is a very welcome attention to detail in the design of the space itself. 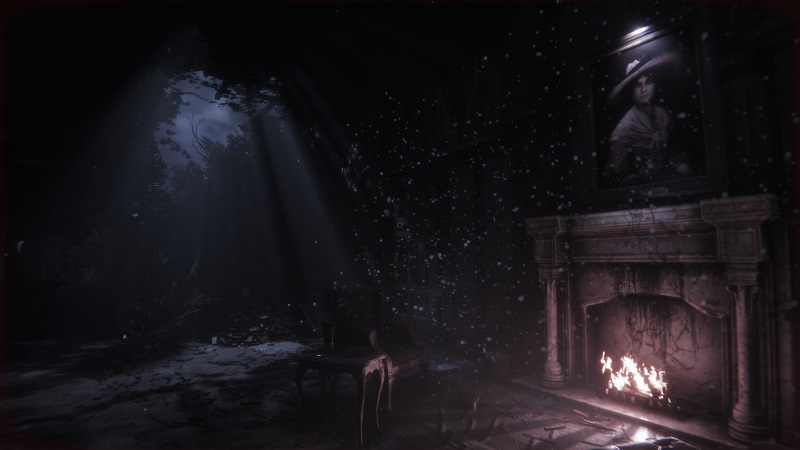 Getting past the exceptional visual presentation, we can move to the gameplay itself, which similarly accomplishes what it set out to do very well. The primary method of interaction here is solving puzzles as well as using the stealth system to traverse the hotel without being caught by its inhabitants.

The main enemies in the game, known as “The Quiet Ones,” are a set of ghastly figures dressed in period-accurate clothing with warped faces that lack normal facial features. The Quiet Ones have extra-sensitive hearing and a very intimidating presence despite being completely blind. These creatures track only by sound, which makes for some very intense encounters, especially since footsteps can be enough to alert them of your presence if you’re close enough or walking too quickly.

There are a few different types of Quiet Ones, each with slightly different patterns and sensitivity to sound, which forces one to be super-alert, even fearing the sound of their own footsteps a lot of the time. Since the audio makes footsteps fairly loud in the mix, it’s sometimes hard to tell them apart from the enemies’ footsteps without closer inspection. The fear was always palpable, even when walking down an empty hallway, thanks to the very robust and clever sound design.

Some of the animations and AI of certain Quiet Ones could’ve used a little more work to feel spot-on with the detail in the environment. They aren’t so bad as to break the immersion when you do encounter one of their slight shortcomings, and usually feels more like a small distraction, if anything. 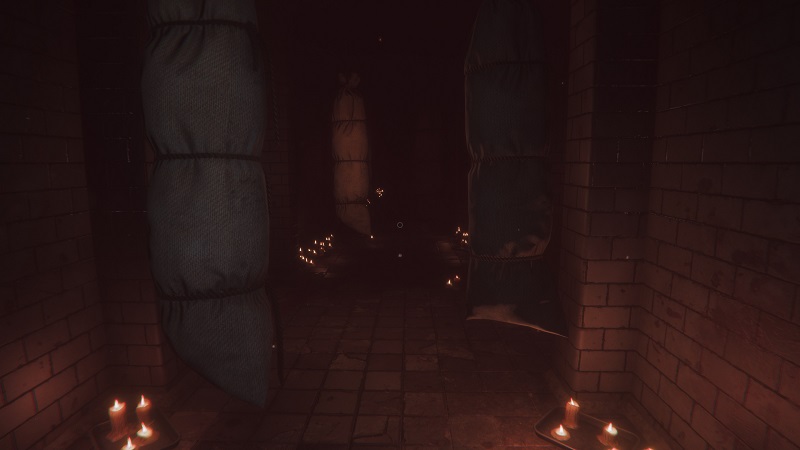 There are a few other well-implemented uses of audio in the gameplay, such as the ability to cover your mouth to hold your breath. This mechanic has various uses, including when you’re standing right near an enemy and don’t want them to hear you breathing — also walking through various clouds of gas, smoke, or dust in the air without coughing. Coughing quickly alerts any nearby enemies to your presence, so care must be taken to hold your breath at the right times.

Holding your breath too long, sprinting too long, and taking damage all make your heart beat fast and loud, often loud enough to where nearby enemies can hear it from several feet away. The constant struggle to stay unheard while having to maintain a few different factors of your physical health creates a continuous balancing act. You must use healing items after taking damage to avoid intensified breathing and heartbeat, and be mindful not to hold your breath too long, as it causes the same kinds of physical problems.

Another clever audio-related gameplay element that builds up tension is the nudge system, where you must be aware of where you’re walking and what kind of objects might be in your way. Moving too quickly into tables, chairs, or cabinets can cause bumping noises that alerts nearby enemies. This is just another element that forces you to be hyper-aware of your surroundings, more so than your average stealth game. 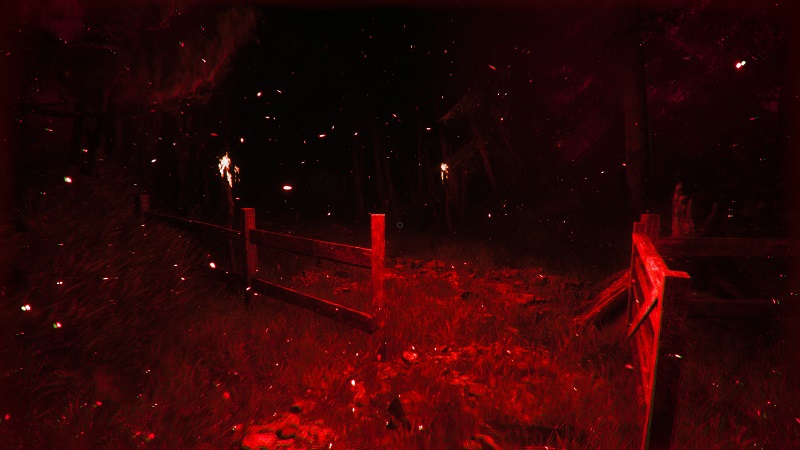 The game features several save rooms throughout, akin to the recent Resident Evil 2 remake’s save rooms, which give you a few moments to relax and save your game, as well as uncover parts of the story through phonographs found within. Save rooms offers a great respite after an intense chase or when you just want to take a few moments to breathe from all the constant tension of sneaking around.

About halfway through the game, another major gameplay element introduced is a limited-use defense weapon, which sends out a large sonic pulse that stuns most nearby enemies for somewhere around 10-15 seconds. The ammo is very scarce and reloading animations long, so it’s generally only used for emergencies. However, this weapon can also be a great tool for speeding up stealth sections in attempts to lower completion time on speed runs if you choose to do so.

Later on, you’ll also be introduced to one of the main antagonists of the story: a giant, 7-foot tall hulking Quiet One known as Abraham. This guy is an absolute terror that chases you to the ends of the Earth once you’re introduced to him, very similar to Resident Evil 2 remake’s infamous Mr. X. Abraham can kill you instantly if you happen to run into him, so these chase sections had me panicking even worse than RE2‘s Mr. X encounters at many points. 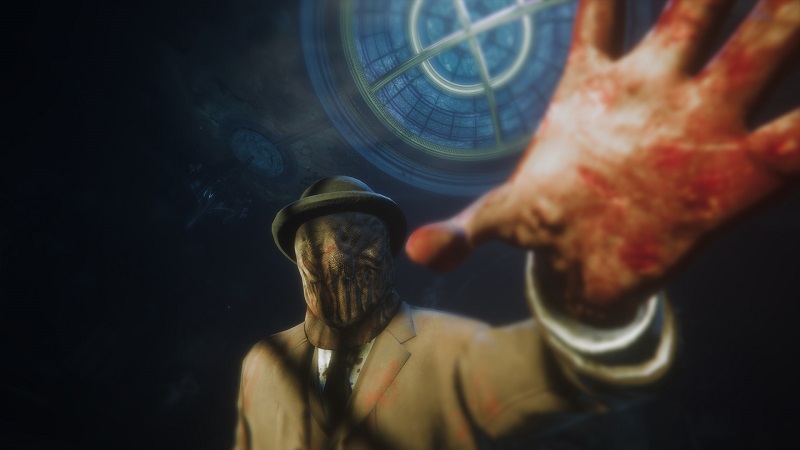 Speaking of the audio and sound in general, the design here is top-notch in every way and goes beyond the typical horror game. Since sound and music are a significant element of the gameplay as well as the story, it gives many layers to the audio presentation that brings it a step above most of its peers. The hotel floors and ceilings creak and pop around you while random footsteps and thumps can be heard while walking through the halls, never letting you feel safe from lurking danger, even when no enemies are visible. The music is also explicitly designed to be dynamic and reflects your actions as you play, much adding to the immersion, tension, and horror. 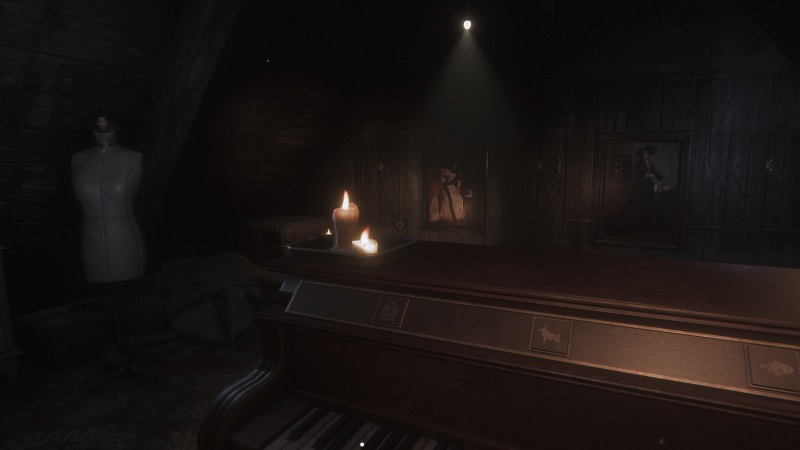 The puzzles and story of the game are interwoven with music as well, with several puzzles involving musical instruments or musical tones of varying kinds. The fact that the main character is a musician and most of the main plot points also revolve around music is just a bonus that ties the whole package together with music as an overall theme.

The music, in itself, is terrifying, and the fact that it constantly adapts to ramp up the tension in appropriate moments just makes it that much more effective. The soundtrack takes inspiration from many different sources, including the early Resident Evil games, several horror movies/shows, as well as classical Welsh folk hymns adapted to modern arrangements with beautiful female vocals and haunting musical arrangements.

On the subject of music and sound design, I recently had a chance to interview the sound director and composer for the game, Gareth Lumb. This interview gave me even more insight into just how much work went into the sound design and music of the game, and every ounce of it shows through in the final product. 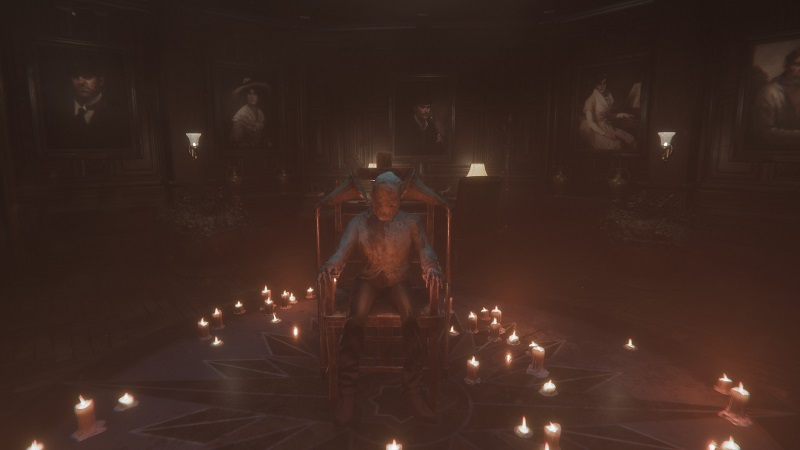 When it comes to controls, Maid of Sker does not disappoint in any way. You always feel in complete control of your character, and traversal has many different ways of being approached, depending on how quiet or fast you want to be. Both keyboard and mouse, as well as controller play, feel tight and responsive on PC without any extra customization. Controls tend to feel slightly floaty and need a bit of customization on the console versions to feel quite right, but it’s easy to adjust in the menu without much effort.

As far as technical performance, the game runs like a dream on PC, with uncapped framerates and impressive overall performance, even on a less-than-modern PC, without compromising visual features to get there. I ran the game at native 4K resolution with a flawless 60fps, where a good amount of modern games are nowhere near optimized enough to be completely steady with those settings.

I also had a chance to test the console versions, which all run at much lower resolutions and tend to feel closer to 30fps with some moderate visual sacrifices here and there. The console versions are still very playable with no major glitches or issues overall, and performance remains steady. In the end, the PC is by far the best way to experience the game, and regardless of what platform you play on, using headphones/loud audio is essential here to get the most out of the game (as the game also tells you when starting it up.) 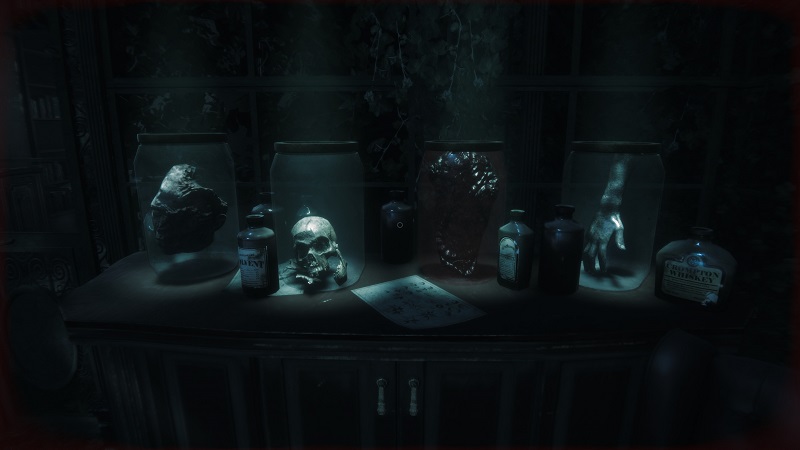 Maid of Sker will generally last you between 5-7 hours on your first playthrough, with an experience that is pretty direct and to the point, with good pacing that feeds you more bits of story as you go. Even if not all of the story beats are as compelling as others, it all ties together well and has some interesting history and folklore interpretations throughout.

There are multiple difficulties with pretty drastic differences in how one approaches the game, and the reasonable length overall makes it enjoyable on repeat runs to try to optimize your speed and efficiency for some additional challenge. 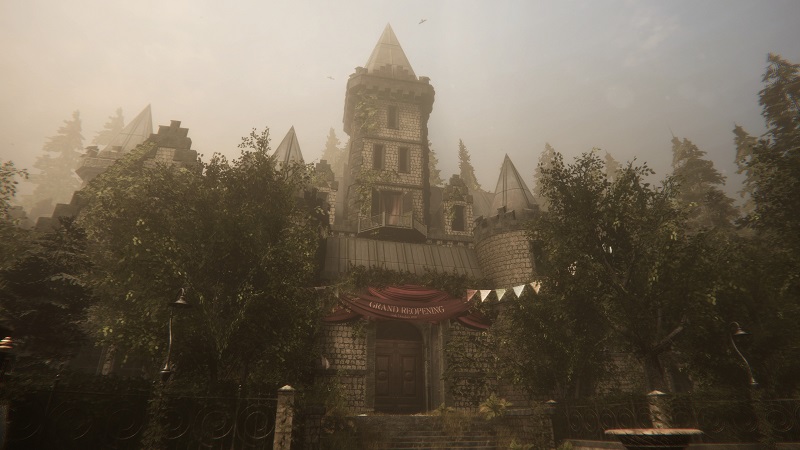 Overall, Maid of Sker is easily one of my top horror games this year so far, even standing its own against the AAA horror giants like Resident Evil 3 (which I loved.) It has plenty of unique charm and a genuinely high level of quality that isn’t seen very often from small studios like Wales Interactive in today’s horror game market.

Especially for the mere $25 price tag, it’s an incredible value that warrants a try from any horror fan, and I can easily recommend this to anyone who’s looking for an authentic stealth-based survival horror experience. We may still have a few heavy hitters of horror dropping later this year, but as of now, Maid of Sker remains at the top of 2020 for me, and hopefully, others will feel the same after spending some time with it.

A PC/Xbox One review copy was provided by the publisher.