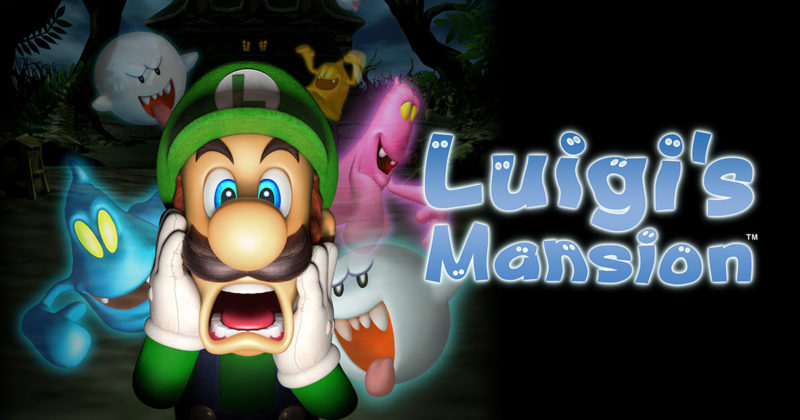 I was about 11 when I played Luigi’s Mansion for the first time; I instantly fell in love. My affinity for the game was not necessarily for the gameplay, which I couldn’t really wrap my head around at the time, or the Mario license, but for the horror aesthetic. I loved horror, spooky old mansions, ghosts, vampire bats, the works. Luigi’s Mansion was all I ever wanted, considering that all the big horror games I’d see at the store were branded with the mark of death to my parents — an M rating. Luigi’s Mansion, however, was kid friendly and boasted that most wonderful of certifications at the time, the E rating. I could play to my heart’s content and revel in the spooky goodness without anyone batting an eye. It was horror, and it was mine.

I can only hope that today’s generation, who have access to a seemingly bottomless well of creepypasta stories, horror videos, and let’s plays of even the most graphic of horror games, can experience this same delight, as Luigi’s Mansion is every bit as enjoyable now as it was then. Following up on the success of its sequel, Luigi’s Mansion: Dark Moon, the original game finds a new home on the 3DS family of systems. Releasing depressingly close to the original version’s 20th anniversary, this portable release upgrades visuals, control, and even adds in a sprinkling of new content to round out a very welcome package. But I’m getting ahead of myself. 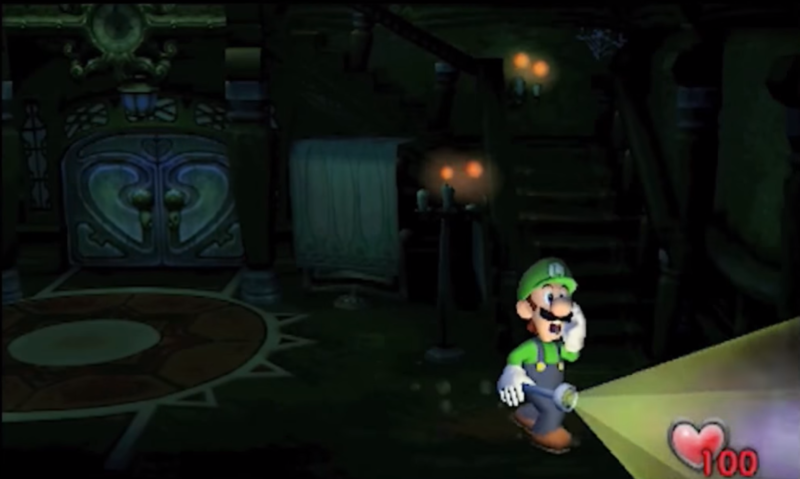 Luigi’s Mansion sees us for the second time in franchise history (we try not to talk about that other one though) filling the shoes of the second half of the iconic Super Mario Bros. duo, after he supposedly wins a luxury mansion. Arriving to find the mansion is significantly creepier (and more haunted) than the flyer let on, and with his brother Mario missing, Luigi is shoved into a full-on ghost hunting adventure. Armed with the Poltergust 3000 and the GameBoy Horror, inventions of Professor E. Gadd, Luigi must explore a macabre labyrinth in search of his brother and a way to escape the haunted abode.

Despite his heritage, Luigi brings none of his Super abilities with him on this venture, being unable to jump or hardly even run, with the focus instead shifted to exploration, puzzle solving, and combat. In all, it makes for a very “survival-horror-lite” experience, feeling instantly familiar to Resident Evil veterans, and acts as a great first step for aspiring horror enthusiasts.

Combat, instead of being about blasting your way through enemies with a gun, is centered around sucking up foes with your modified ghost-catching vacuum. Sometimes figuring out how exactly to make a ghost vulnerable is a puzzle in itself, as you must force them to expose their weak point first. Nothing is ever completely straightforward in this haunted home, so you have to keep your wits about you. Don’t worry, though, nothing will ever become an overwhelming challenge. The 3DS version also adds in co-op with a second player as Gooigi, a jelly Luigi creation of the future E. Gadd to aid you on your quest, and a boss rush mode that can be played in co-op as well. 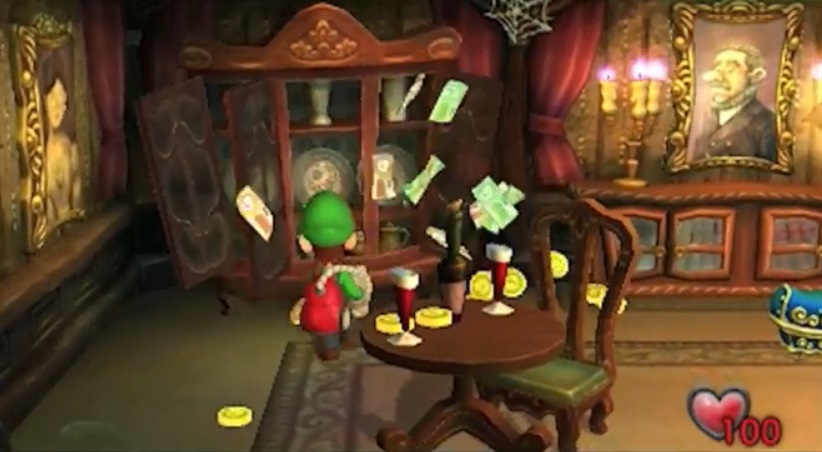 The 3DS version ads in some gyro-sensor controls, as well as the ability to control your aim with a Circle Pad Pro attachment or the New 3DS’ …nub thing. This is actually my only real complaint about this release, as using a New 3DS forces you to use the nub to control aim, and the nub sucks really hard. It’s horrendously inaccurate and under sensitive. I constantly feel like I’m just going to end up hurting my thumb when locked in one of the more involved battles. What’s worse is that, as the nub registers as having a Circle Pad Pro plugged in, there’s no way to turn the feature off, meaning that the alternate, non-nub control scheme is completely inaccessible. It really highlights how Nintendo should have just implemented a second circle pad for these more intricate games. I can’t imagine playing an actual shooter with this awful nub. The gyro stuff works fine, though, and actually makes using the GameBoy Horror, which basically serves as an in-game camera, more fun to use.

On top of control enhancements, the 3DS release has some surprisingly significant visual upgrades, with much of the game either retextured with new and more detailed looks, or extra clutter and design going into the backgrounds. While not quite as big an overhaul as the two Zelda remakes on the system (which are way more modified than you probably realized they were), it’s still definitely noticeable. While the extra effort put into the visuals was definitely appreciated, I was a little surprised however by how dull the 3D effect is.

By and large, people seem to have been pretty lukewarm on using the 3D mode of the 3DS, hence the sister system the 2DS, but even so the effect feels half-hearted here. Despite Luigi’s Mansion‘s history with 3D (having been planned to work with a scrapped 3D TV set up for the GameCube), the overall effect feels like much of the game just… isn’t in 3D. Or very, very light 3D. Luigi and other foreground elements stand out like crazy, but anything much further in the background than Luigi himself looks flat. Maybe I’m just spoiled by games that utilize the 3D as a major element of the design (like Zelda: Link Between Worlds), but it still felt like an afterthought that was in the game because it had to be, not because they wanted it there. 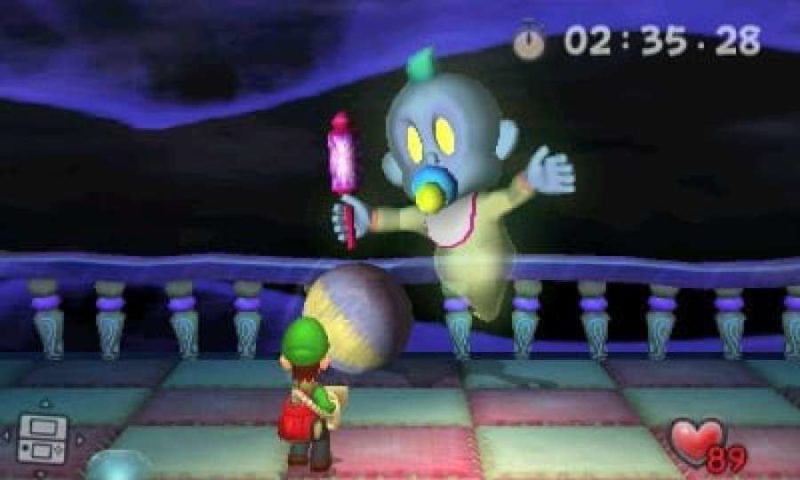 None of this, of course, takes away from what a great game Luigi’s Mansion is. It has been at least ten years since the last time I played this game, and I’m still delighted by how fun and methodical the experience has been. After how complex flashlight became and overwhelmingly puzzle heavy the sequel was, the original game feels wonderfully focused and streamlined. The mansion is a joy to explore and open up room by room, and the more involved fights between named ghosts break up the pace delightfully. The overall presentation and world is also just so freaking charming, with the masterful mix of Kazumi Totaka and Shinobu Tanaka’s excellent main theme, and Luigi actually humming along with that theme being a real highlight. A surprisingly weird sense of humor helps tie it all together, with Luigi, in general, being a lot more vocal and thoughtful than Mario pretty much ever is (at least in text, describing things seen through the GameBoy Horror screen, or items picked up and examined). The Mario items especially, which are lost pieces of Mario’s gear (his hat, a glove, etc) prove to be the funniest, making the otherwise sparkly clean mascot seem more like a gross weirdo in person.

Overall, if you have a youngster interested in horror that can’t play the more intense games out there, Luigi’s Mansion could quite possibly be one of the best ways to introduce the core concepts of the survival horror genre to a new player. If you’re a veteran horror fan, Luigi’s Mansion is a charming delight that’s just as well polished and designed as any other Mario game. Some weird hiccups with the transition to 3DS aside (which do little more than highlight how strange it is that this was ported to 3DS rather than Switch), nothing gets in the way of how good this game feels.

A review copy was purchased for Nintendo 3DS.