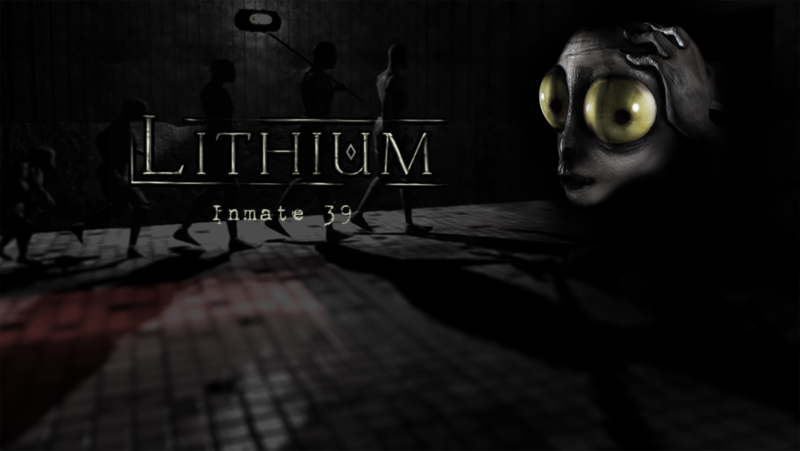 Lithium: Inmate 39 is a game that I have been excited to play since it was announced. That excitement was built equally from the creepy-cool aesthetic of the trailer and the fact that the developers are based in Costa Rica. Central America is just beginning to find its way into the global game market, and every new entry is a chance to breathe fresh life into games from a new perspective. Lithium: Inmate 39 had my full attention from the very start, and I am not quite sure if that was its savior or executioner.

Players puzzle their way through the game playing as Inmate 39, a fragile lemur with the ability to occasionally summon a stronger character for combat. Simply wind up an old grandfather clock and Inmate 39 will command a ‘roid raging half-naked soldier hell bent on ripping apart enemies with his bare hands. These clocks are positioned right where you need them to get past enemies, effectively denoting the transition from evasion to combat in the game. The keys are positioned right where you least need them, behind puzzles that will make you dig out your most colorful curse words. There are enemies and stories along the way, and enough puzzles to please every tinkerer in the world. Setting the game in the time period when Costa Rica was recovering from the devastating Civil War of 1948 adds an interesting historical element that ties in beautifully with the main story. There were plenty of things going right for Lithium: Inmate 39, but it somehow managed to mess them up. 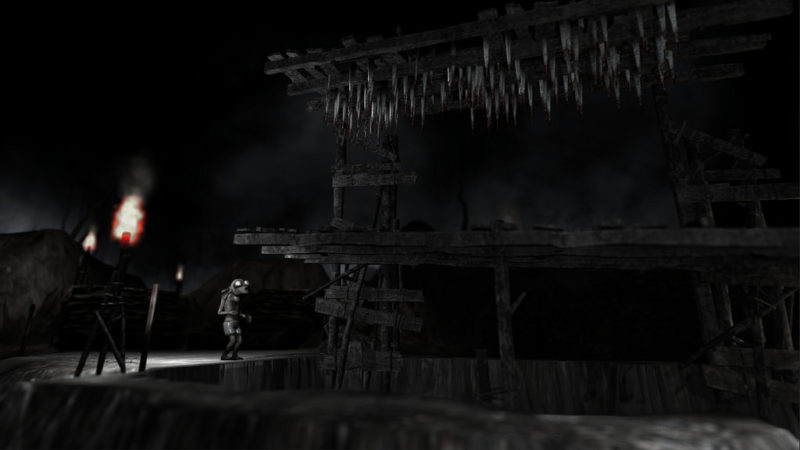 One of my biggest hopes going into this game was that it would handle the topic of psychiatric treatment with some grace. We have to commit to one small spoiler to discuss the story, though it is one that is divulged very early in the game. The lemur you control through most of the game is the mental construct of a man hospitalized for PTSD from battle. His psychosis is tied to a significant event, which you slowly uncover from patient notes scattered throughout the game. The final boss battle of the game wraps Inmate 39’s story up nicely, and the game comes to represent the battle raging in his mind as he comes to terms with what has happened. My only complaint about the main storyline is that it is a bit uninspired and too short for the space it occupies. Given the puzzle nature of the game, I almost feel like Lithium could have skipped Inmate 39 entirely, and simply been a challenging puzzle game with little narrative. That tactic has worked well for Slayaway Camp, another title I have played recently, and I cannot help feeling like Lithium: Inmate 39 would benefit from the levity.

The larger issue with the storyline, though, lies in the bosses you face throughout the game. Inmate 39 fights desperately against the beasts in his own head, the doctors he feels will harm him, and other inmates that pose grave danger to anyone near them. The final boss battle is directly related to Inmate 39’s story, but the others are barely even tangential. These inmates each suffer from a specific, named mental illness found in the real world. Each inmate is a caricature of the most violent, dangerous elements of these illnesses, manifesting as a real and imminent danger to Inmate 39. I’ve discussed in a past review the absolute necessity for responsibility in depictions of mental illness. There is too much stigma in the world surrounding the diagnosis and treatment of psychiatric conditions, and this makes it harder to get people to seek help when these conditions are most likely to respond to minimally invasive therapies. It also makes it harder for people suffering from mental illness to find acceptance in a society that is constantly told they’re dangerous. It is not unreasonable for entertainment to tackle psychosis and inpatient psychiatric facilities as elements of horror, but it is critical that they do so with respect. Lithium: Inmate 39 handles the main character’s journey through psychosis flawlessly, but does a great disservice to the other illnesses it depicts. 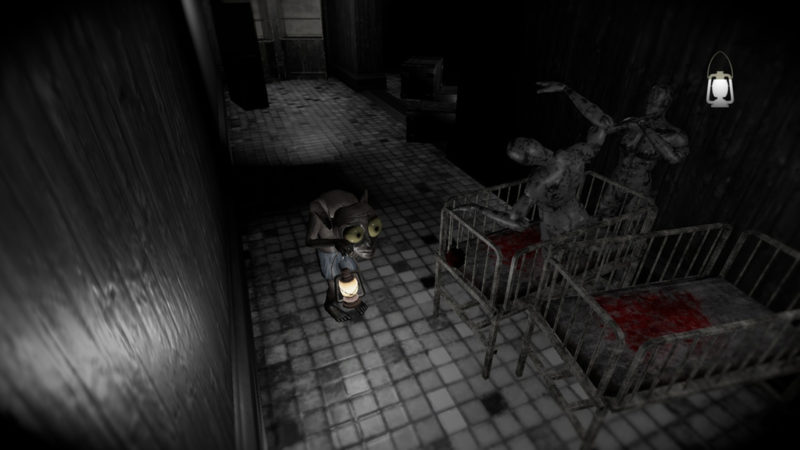 The platform mechanics of Lithium: Inmate 39 are terrible. They are not quite floaty, but they stray too far from the intended mark to be reliable. Jumps are not always the same distance or direction as you expected, and landing where you intended can be tricky. Add to this the fixed camera angles employed throughout the game, and you have a disaster. The camera changes angles at the worst possible moments, either causing your character to turn around or obscuring the landing you were hoping to make. Ducking traps and running from enemies are reliable, but this is of little comfort when you cannot simply jump over obstacles or rely on a weapon. The saving grace, then, is that you do not really rely on the one firearm in the entire game, and jumping is mostly to traverse the world, not to evade moving enemies. Save points are usually placed just behind you, so it is not horribly annoying when you die for the fifth time in a particular sequence. Figuring hiw this game works is by trial and error, but the abundance of save points carries it well enough.

The graphics and sound design for this game are incredibly well done. They are not the most realistic, amazing graphics ever committed to a piece of interactive entertainment, but they are impeccably created for the story at hand. The nearly monochrome palette is an excellent choice for Inmate 39’s inner workings, conveying the lack of emotional color in his world. The creepy accents along the halls create visual interest and tend to hide the real dangers reaching out of the walls to grab you. My singular complaint is that a game that relies on jumping every five steps has exactly one jumping sound. If I never hear that grunting dog toy of death again, I will be glad. I muted the game more than once while replaying sections with back to back jumps. 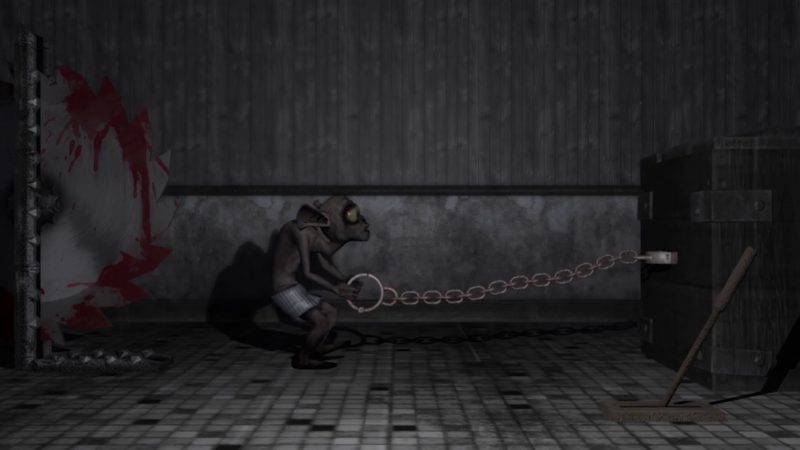 It is interesting to note that the boss battles are actually where Lithium: Inmate 39 excels. You will not often take on direct combat. Instead, boss battles are held among large puzzles with many moving pieces. Players will need to figure out how each battle area works, time their moves perfectly, and bait the enemy into following them into the trap. These battles were a joy to play, bringing out my critical-thinking skills and inner child simultaneously. It was often in boss battles that controls were at their most reliable and cameras on their best behavior. If the entire game played like the boss battles do, and the bosses lacked the insensitive backstory based on real-life mental ailments, then this game would have been an 8/10. Unfortunately, that is not how it all played out.

Lithium: Inmate 39 is $9.99, and takes about five hours to play. That is a good value for the runtime, but not necessarily for the product that you get. This game is not for rage quitters or the faint of heart. (It is also not for those people who have photosensitive seizures.) The title alone should be trigger warning enough for anyone who experiences issues with depictions of mental illness, and I will add my own for those fighting battle-related PTSD. All of that said, Lithium: Inmate 39 is an oddly compelling game. It taunted my inner perfectionist enough to induce gameplay masochism, creating a nagging need to finish. The setbacks are small enough that I always wanted to try just one more time, just in case it worked. That tells me that CanuArts is on to something here. If they can clean up the controls, be careful with their depictions of real disorders, and put some meat on their next story, I’ll totally be down to play Inmate 40.