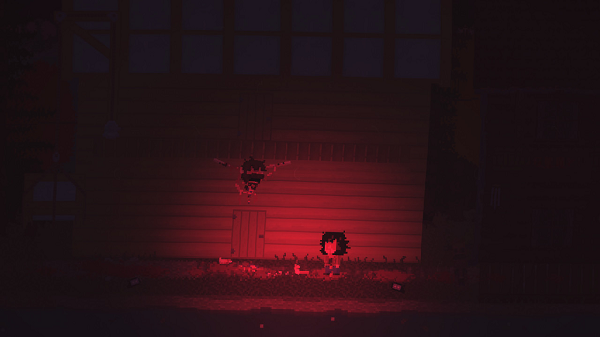 I imagine many of us have watched a classic slasher movie at some point in our lives and found ourselves yelling at the characters because they keep making dumb choices. Certainly, if it was us at that campsite or in that scary forest, we wouldn’t have made those stupid decisions that got those silly teenagers killed. Well, consider this a challenge, since Lakeview Cabin is a comedic horror game that simulates what it’s like to be in the middle of a slasher movie.

Technically, the game is an ongoing series and the product you buy on Steam entitles you to play Lakeview Cabin III and its upcoming sequels, with the two prior games apparently being available for free on some flash sites. Upon starting the game, you will be placed in a small hub world with a few random characters. While there are some secrets to be found here, the main game lies in the cinema portion of the map, from which you enter the levels. 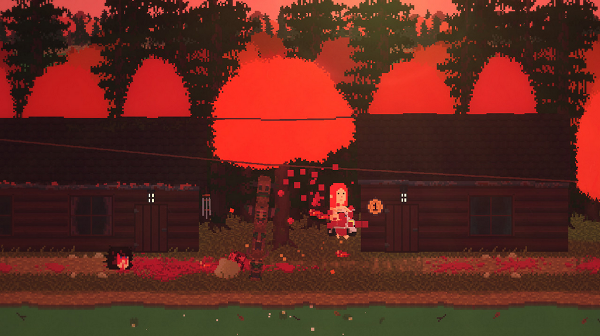 Lakeview Cabin III is pretty much a parody of Friday the 13th, as you take control over four camp counselors that are preparing for the eventual guests. You control one of these people at a time and can engage in many a silly activity around the camp, ranging from using the zipline with childish glee to entertainment of a more erotic nature. By pressing the spacebar, you switch to the next character in the line-up or you can hold the button and press the arrow keys to select a character from the menu. Before long, one of the game’s murderers will spawn and come after you, at which point the game turns into a strategic puzzle in which you try to outsmart and destroy the enemy.

The fun in this lies in the fact that the game gives you little to no directions to work with and leaves it up to you to discover what makes certain things happen. Once you’re done fooling around and want to beat the game, you’ll have to pay careful attention to which actions trigger what events. There are small actions that can make the game harder or easier for you, such as knowing which triggers affect when a murderer shows up, allowing you to make sure they will never appear too early for you to deal with. It’s a complicated process and even when you do know what you’re doing, it’s a challenge to fight off your foes.

Using the various items spread around the campsite, you can arm your four counselors and lay out traps, yet even the most well-planned gauntlet can backfire on you at a whim or fail completely because your timing was just a moment off. In this regard, the game may just be a little too punishing, since there is barely any room to make a comeback or compensate for a valuable resource you wasted. Even after figuring out all the good secrets, in most of my sessions I could only manage to kill one murderer at best, usually at the cost of a counselor or two. For the sake of this review, I checked in with the community to see what strategies worked best, and let’s just say you may want to invest in a second monitor, because it’s quite a long checklist of tasks you have to complete in a small time-frame if you want to stand a chance. 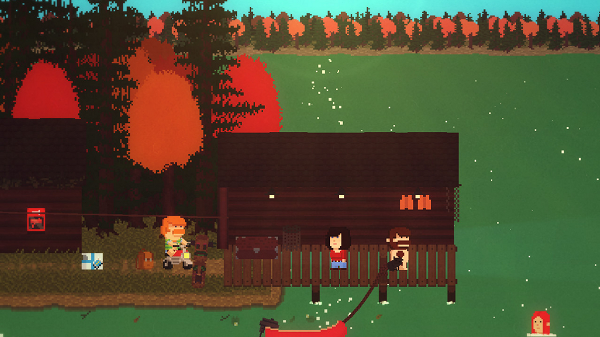 The comedy mostly lives on the random nature of the game and the range of options you have at your disposal. It would spoil the fun if I went into too much detail, but let’s just say that most of my failed attempts at killing the murderers ended in absolute hilarity. It does rely on the player’s input a lot, however, as nothing funny will happen unless the player goes out of their way to seek it out. This is also a mechanical problem, since there is not really an AI to speak of and counselors you are not controlling will simply stand around or maintain the last task you ordered them to do; so it’s rare for something spontaneous to occur. This is especially annoying when a defense has failed and you have to retreat, since you can only move one character at a time; a way to command uncontrolled counselors would be much appreciated.

Interestingly enough, the horror aspects don’t really suffer because of the comedy. In fact, I’d say it manages to hold its own quite well, thanks to some really chilling sound-effects and unexpected changes to the environment. You might just be walking around when you suddenly find a dead animal nailed to the side of a building you passed just moments earlier and the corpses of your fallen comrades have the curious tendency to disappear and turn up sometime later as morbid art-pieces. There are a lot of subtle elements like this and few things are as frightening as trying to switch to another character, only to discover you’re the only one left. The pixelated art-style is also put to good use and it’s quite remarkable how much gore and detail developer Roope Tamminen managed to cramp into this game.

With the promise of three more chapters ahead of us, I feel confident in saying that Lakeview Cabin is one of the more intriguing horror games I got to play in recent times. I had a lot of fun trying to discover what made the game tick, occasionally unwinding by seeing what kind of carnage I could cause myself. It’s definitely not for everyone, however, as you really need to be in the mood to experiment and fail a lot, plus you need to have some knowledge of classic slasher movies to appreciate the source material that is being parodied here.