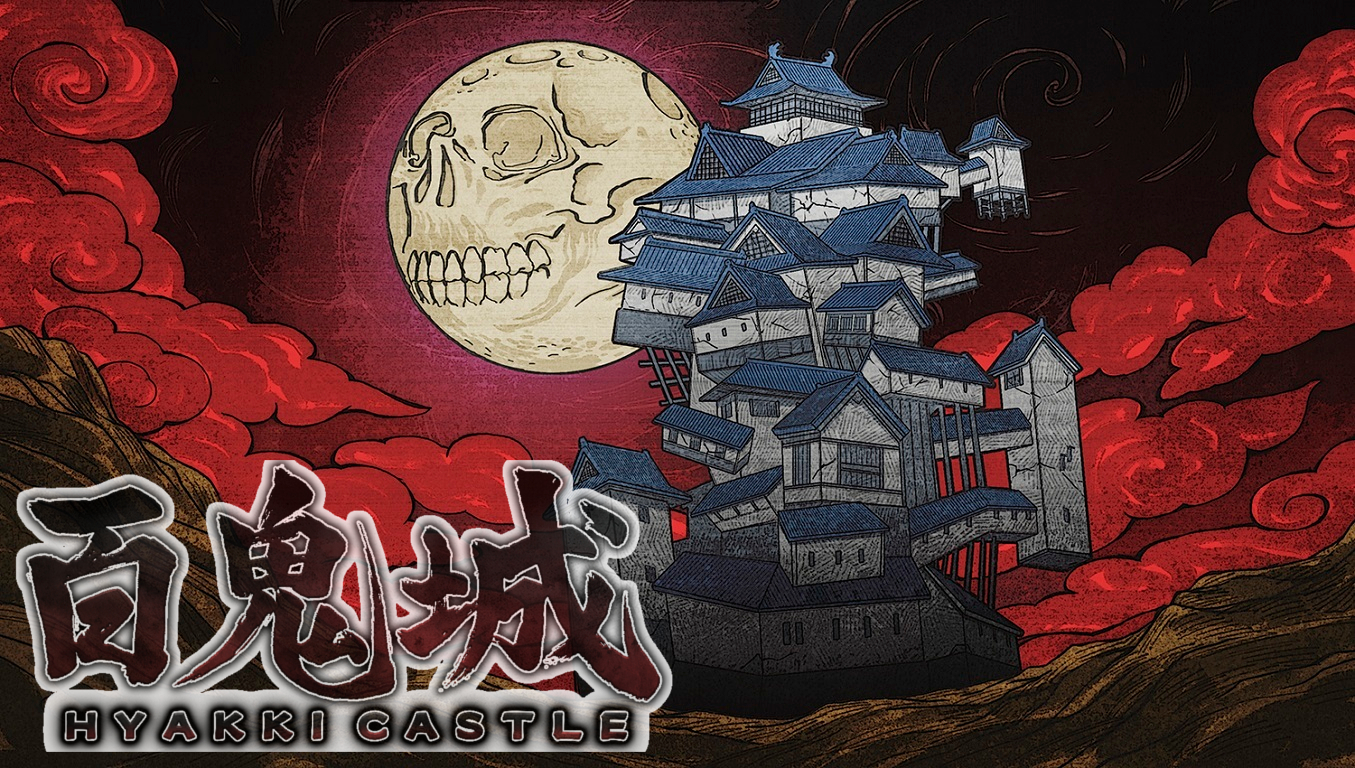 At first glance Hyakki Castle looks to be a Japanese horror version of Legend of Grimrock, a real-time dungeon crawler that sees you exploring an ancient castle teeming with evil spirits. You will customize a team of four warriors before getting dumped into the base of the titular castle, leaving you alone to figure out what’s going on (and how to play) as you ascend the many levels to the top. It’s an exciting concept, to be sure, as who wouldn’t want a scary dungeon crawler full of yokai to combat? But there are no real scares to be found here, no real excitement, just a lot of bland enemies and environments in what feels like an unfinished game.

As in any similar first-person game (Grimrock, Etrian Odyssey, etc.) you explore each level block by block, watching it slowly fill in on the on-screen mini-map. You’ll advance to the next level only after fighting a dozen or so enemies and pulling a bunch of levers to open doors. Occasionally, you’ll stumble across a secret area or have to contend with an easy puzzle that involves stepping on massive switch plates, but for the most part, you’ll be walking along unremarkable hallways hoping for something to happen. Every few levels there’s an enormous boss monster, and then exit the next level. Over, and over, and over again. 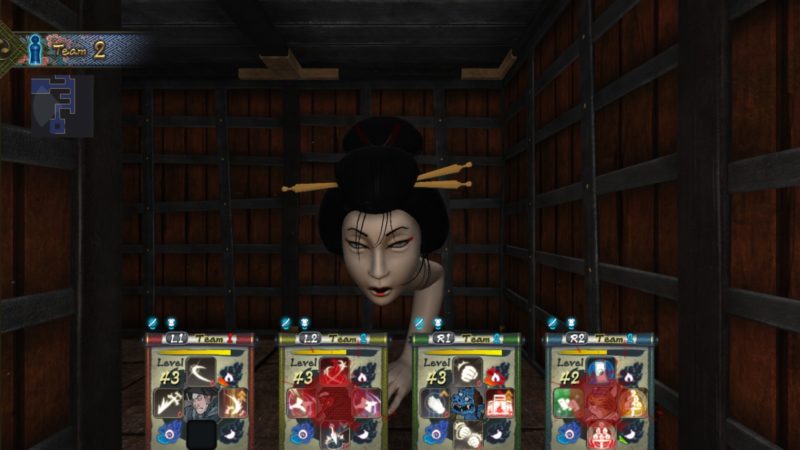 Playable characters all have different abilities, but you’ll have no idea what they do until you pick your team — this game does not hold your hand at all before throwing you in. Samurai or ninjas roles and even character race are selectable. If you want a team full of three-headed Oni or giant cat-people Nekomata, have at. Some are sword-fighting tanks while others throw ninja stars or use magic scrolls, but again, you won’t really know what’s useful until you’ve already made your choice and have started the game. Each character can level up and learn new skills, both offensive and defensive, so a good mix is essential. Along your journey, you’ll find chests that have different weapons to upgrade your fighters, but there’s no place to sell any extras, so you just have to chuck the weaker items away. After just a short time with the game, a strong suspicion that it lacks something develops, as you drift along stepping on switches, wondering when you’re going to feel anything as you fight yet another instance of the same enemy.

The enemy design is great, but no matter the creature you face, you’ll immediately note that their attack patterns are heavily scripted. This is a real-time game, which means that you can generally see every single blow coming and easily side-step them. Except for one enemy (that appears out of nowhere), none of them take advantage of their horrific appearances, either. Don’t trust the grisly images and creepy pseudo-Grindhouse filters of the launch trailer — the real game lacks this vibe entirely. Hyakki Castle had all the potential to be a terrifying game, an atmospheric experience that should leave you dreading every hallway and worrying about what might be lurking just around the corner. Instead, the enemies are just annoying obstacles. 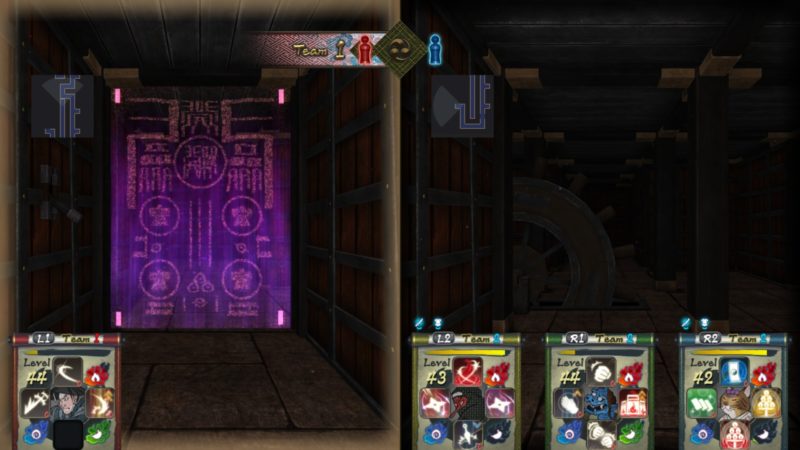 One big gimmick with Hyakki Castle is that you can split your party into two. At the press of the button you can split off a warrior from the group to do their own thing, and the screen will split to show the two different viewpoints. It’s an interesting concept, at first, until you realize that it’s damn near impossible to control. In concept, this would allow you to make two different teams to tackle hard enemies (hitting enemies from the side or back does more damage), but the developers apparently forgot that this is a real-time game. A co-op experience would have made it manageable but you have to hit a key to switch between the two teams, and it quickly gets confusing as to which side you’re controlling, especially in a battle. It’s a shame because some enemies surely would be more manageable if you could work these strategies, if you had one person get the monster to chase after them while the other team picks it off with long-range attacks, for instance. But the controls are so clumsy that it’s impossible, and the only thing that split-screen is used for are the many puzzles that require you to stand on two different switch plates simultaneously.

It doesn’t help that the game feels like an early access title, and the developers seem to be treating it as one as well. In its short time since release, the game has already received five major updates that have sought to fix the many problems that players faced with the game’s UI and difficulty. It’s now much easier to get around the menus, bosses have been toned down, and they’ve added a lot more information on how to play the game, instead of just throwing you into the castle with no idea what you can do. 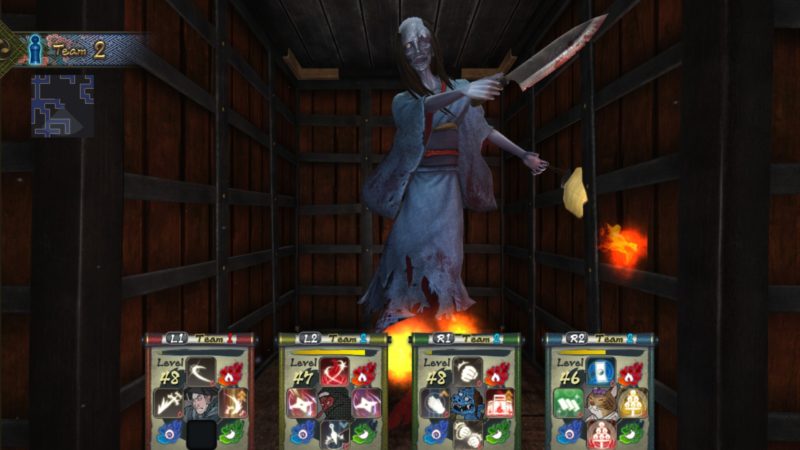 It’s good to see the developers responding so quickly to complaints, but of course, the question immediately becomes why they didn’t launch with many of these features? Some, such the ability to close the game’s menu with the Esc button rather than having to flip through numerous screens to find the button to exit, seems astonishing that they weren’t implemented from the beginning. The game feels rushed and unfinished as if there wasn’t nearly enough playtesting done.

Players of Hyakki Castle will have some fun exploring its world but will lament that it’s so static and boring. Every environmental background looks the same, and there are only so many levers you can push and trapdoors you fall down before mundanity strikes. For something that seems so steeped in style there’s no real character to this game. 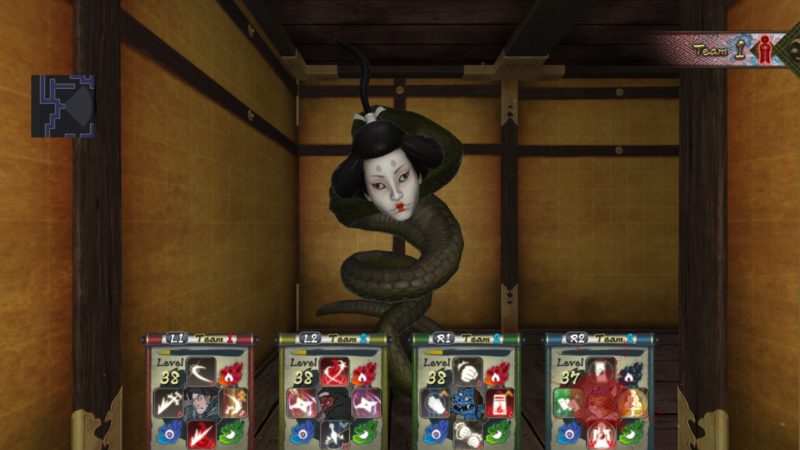 Hyakki Castle has elements that certainly work, but even in its current state, it feels like an early concept of a more fleshed out game far off from actual realization. Perhaps one day in the future enough updates will be made to it that it feels like a must-buy for dungeon crawler fans hoping for something new, but it doesn’t feel that way today. Enter this castle with care.