Hotline Miami is an homage to simpler gaming times, where 8-bit graphics, simple mechanics, and challenging gameplay captured your attention for hours on end. Hotline Miami has a lot of flair. It’s both a glamorization of violence with a cool 1980’s neon aesthetic and a tribute to games of that era. With its arrival on PlayStation 3 and the PlayStation Vita, more people can jump into the colorful and violent world that developer Dennaton Games released last fall.

Hotline Miami puts you in the blood stained shoes of a man without a name, who is simply referred to as “Jacket” by fans. For the sake of giving him a name, let’s stick with that. Jacket receives strange telephone calls that alert him to an event somewhere in the city that he should attend. These covert phone calls are actually assignments of sorts where Jacket will find a bunch of thugs to kill. The story of Hotline Miami is surprisingly judicious and compelling; being focused on the murderous exploits of Jacket, it’s soon made clear that he’s probably not sane.

Despite the simple graphics and short dialogue sequences in between missions, Hotline Miami does exceptionally well at suggesting that something is wrong, that things are not as they seem in Jacket’s world. Each segment that connects the missions successfully disturbs the player through subtle means. I consider this quite the accomplishment, as not many games leave me feeling uneasy, but a few simple character exchanges did so in this game. Sure, the graphics are 8-bit styled, but at many times, it’s what you don’t see that contributes to the unnerving effect to the horrific scenes. 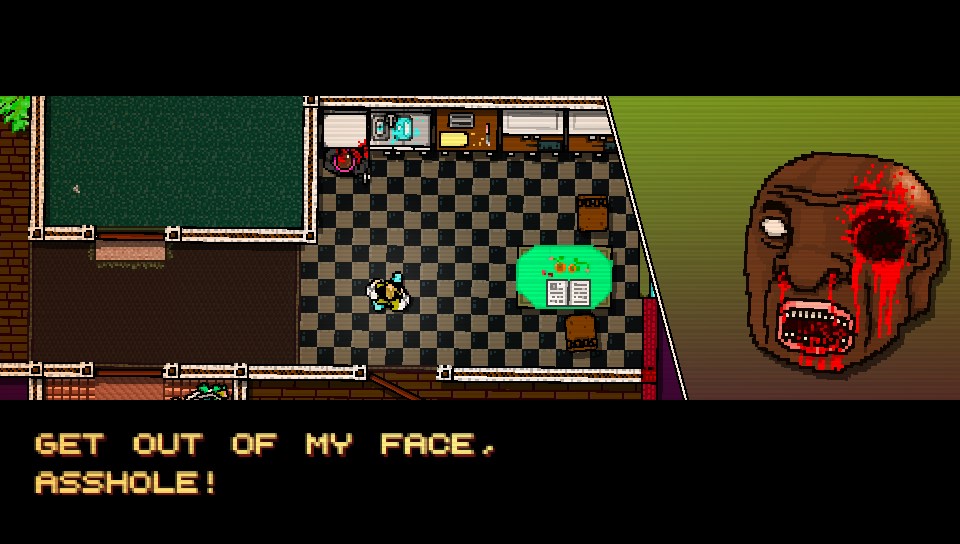 Violence is of course a prevalent theme in this game. As mentioned above, the violence in Jacket’s world bleeds into his daily life– which does a wonderful job at making Hotline Miami a psychological odyssey and is the reasoning behind why I consider this game worth covering on this site. But how does it play? Well, brutal fucking fun, that’s how.

Each mission of Hotline Miami plays out as a tactical slaughter-fest. Upon the start of a mission, players can choose which mask they want to wear. These masks each have their own unique skills, ranging from extra running speed, deadly punches, doors being deadly when pushed against enemies, or starting a level with a weapon. Masks are themed after animals, and can be found in levels and unlocked after missions. Hotline Miami is a one hit kill game. Players will be faced with numerous trial and error moments, but that’s what makes the game so addictive.

Entering a building full of thugs and plotting a strategy to take them out is a sinful pleasure that I should be ashamed of. Punching an enemy to knock him down and then stealing his baseball bat, which will promptly be used to bash his head in is cool, but it’s much better if that same bat is used to kill several other enemies. Oh wait, that one isn’t dead yet? Snap his neck, then! And while you’re at it, throw that bat across the room, knocking over a thug against the wall. Now, take your boot and curb stomp the son of a bitch! Slit that one’s throat! … I’m sorry; this game is too much fun.

Brutality and strategy are the tools that Jacket uses to conquer each mission. Depending on kill variety, speed, and combos, points can be accumulated to earn a letter score per mission. New to the PlayStation version of the games are Leaderboards, where players can see where they stand with other psychos. 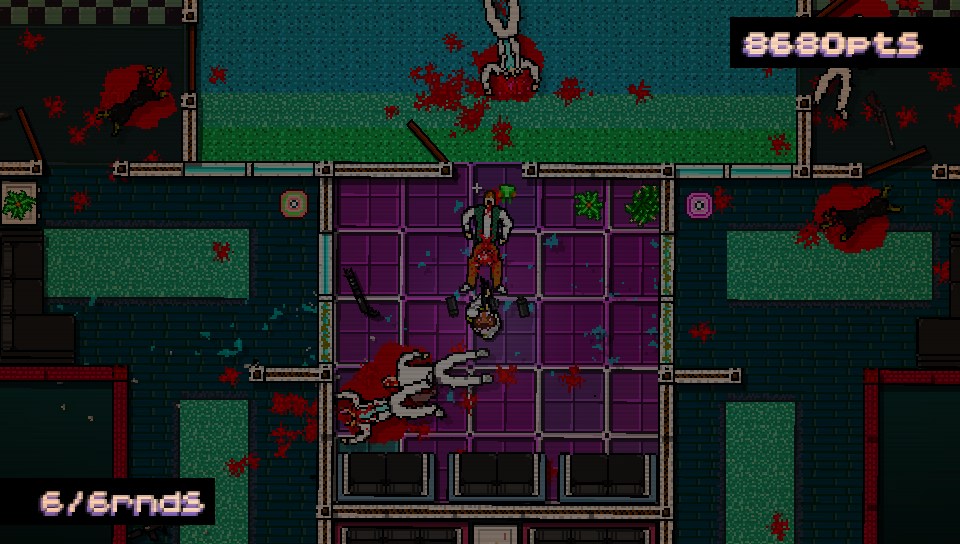 Despite being originally designed for a mouse and keyboard, Hotline Miami translates well to a two stick controller: left stick controlling the player, and the right stick controlling where the player is facing. In the PC version, I didn’t know about the lock-on mechanic until being nearly ¾ the way through in the game. In the PlayStation version, more specifically the Vita version which is the platform I played this version on, lock-on targets are controlled by tapping on them with the touch screen. This makes choosing an important target a much more organic action, as opposed to fiddling between lock-ons with the analog stick. Perhaps because I was used to aiming at enemies freely without the use of lock-on, my use of the feature was much more situational than normal: I used lock-on for a target that I didn’t want to risk losing sight off when he was off-screen. Whether this is how all players will use the feature is unknown to me, but it worked well for me when used sparingly. A potential issue here, which I’ve mentioned already, is that switching between lock-on targets can become messy when the situation becomes frantic. Sometimes a lock-on may even stick past several rooms, handicapping the player from aiming freely unless he or she taps the screen fast enough.

No review would do this game justice if it didn’t acknowledge the sound design. Along with the brutal, pulpy, and crunchy death sounds that come from general gameplay, Hotline Miami has a fantastic soundtrack. Taking influences from 80’s club culture, with synthesizers and repetitive beats, the soundtrack for Hotline Miami is brilliant. There are a lot of upbeat tracks here that provide a lot of energy to players during missions, which helps the addictive nature of getting a mission done after several retries. There are a handful of darker tracks that contrast with the more energetic mission/killing songs mentioned earlier. A few songs in particular mirror the game’s psychological themes by having odd fluctuations in pitch and rhythm, which I believe to be indicative of Jacket’s sanity. 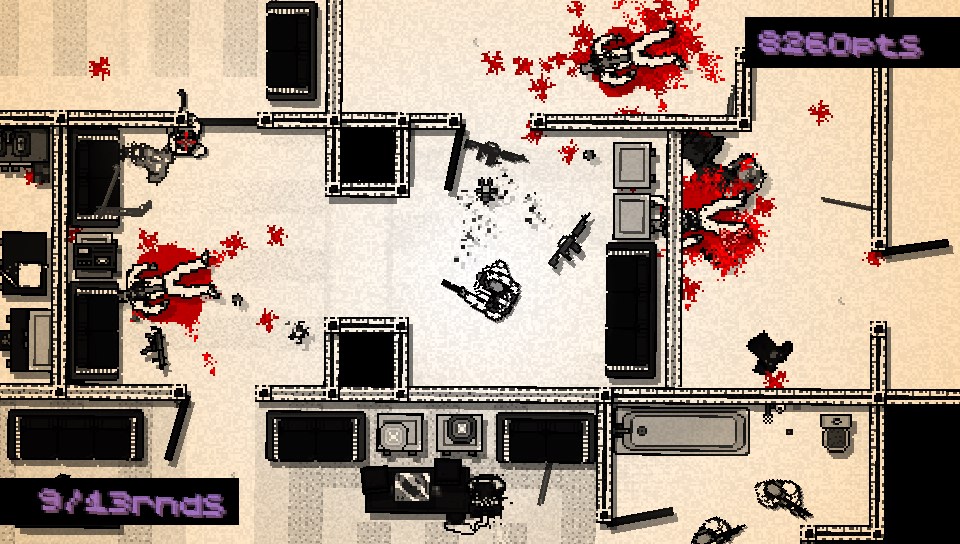 Hotline Miami is a disturbing game in that it makes the killing of bad guys a viscous yet masterful gameplay mechanic, one that harkens back to an era where games did not hold your hand and give you any hints. This psychological romp through an era filled with neon lights, great music, and gritty street crime is well worth the $9.99 price-tag. A new mask, Leaderboard support, and trophies may not be enough of an incentive to re-buy the game, but if you’re addicted to what it has to offer and want the ability to take this game on-the-go, I don’t see any reason why not to indulge once more. If you’re like me, you may even prefer this version to its PC counterpart.

Aside from the occasional lock-on mishap, Hotline Miami is damn near perfect. It’s got a simple but compelling narrative, amazing music, lots of score-chasing replay value, as well as gameplay that hooks you right in.