Review: Higurashi When They Cry - Chapter 1: Onikakushi - Rely on Horror 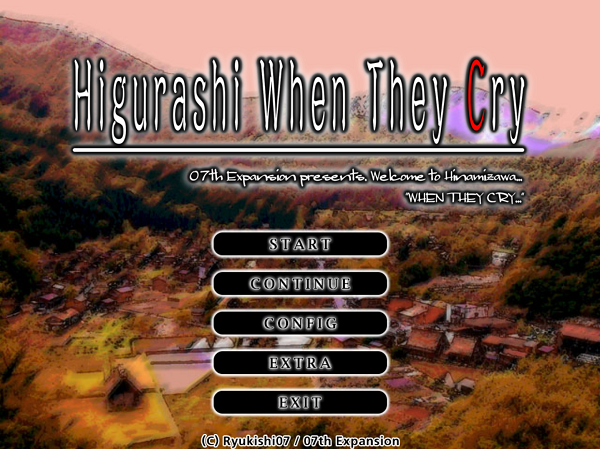 Originally released in 2002, chapter 1 of Higurashi: no Naku Koro ni was the start of an amazing series that would be adapted into a manga, anime, novels, and live-action movies. While it has been re-released numerous times by different companies, we have waited a long time in order to see this franchise debut on Steam. Developer Manga Gamer, who also translated the original 2002 release of the game, worked nearly two years on this remastering, and the first chapter is finally here. Excitedly I went into this game and discovered much had remained the same, yet there was plenty of new to find as well.

The Onikakushi chapter of Higurashi has the difficult job of creating the foundation of a story that will become more than a little complex in future chapters. This means providing the information needed to understand the basics of the world without scaring off its readers. This is a task that it handles pretty well, but not perfectly.

The story is told, mostly, from the perspective of main character Keiichi Maebara. Originally a city boy, Keiichi has recently moved to the rural town of Hinamizawa due to his father’s work as a painter. A month down the line, he has already befriended a group of five local girls with whom he attends school and hangs out. While Higurashi is most definitely a horror franchise, what makes it work really well is that a large portion of its content is used solely for character-building. 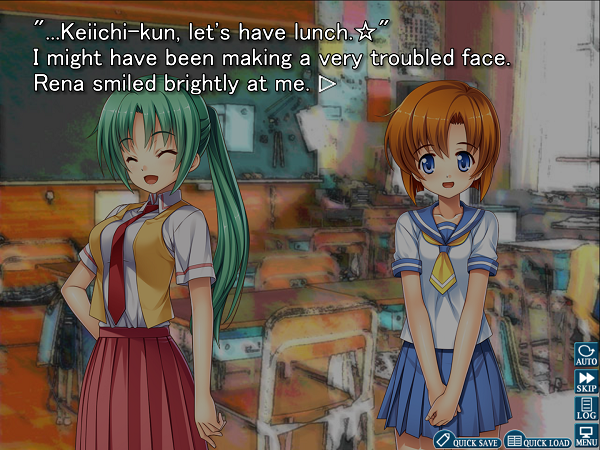 It takes a good four and a half hours before the story switches completely to horror-mode and everything leading up to that is kind of similar to any random slice-of-life. The characters simply have fun with each other as Keiichi is invited into the girls’ club in which they play a variety of games. We get to read detailed mind-battles as Keiichi engages his friends in card games, the cast goes out for a picnic, and attend local festivals.

All of this can be annoying to read through if you went into it expecting a non-stop horror experience in the same vein as Song of Saya, but there are some significant hints during this period that will be relevant later in the story. There is also a healthy dose of comedy that is a lot easier to sample than that of the popular anime adaptation by Studio Deen, simply because it feels more natural and the lack of voice-acting means it isn’t as obnoxiously loud.

Additionally, it helps that the cast of characters is quite good, though first-time readers may not get that impression from just reading this chapter. The characterization is spread out like butter, meaning only two of the five friends get any real screen-time. The rest of the cast will have to wait some time before the spotlight shines on them and we get to explore their personalities, character arcs, and history. I don’t really mind this, since it leaves the reader with something to look forward to and it benefits the natural flow of the story, as the exclusion of this information is not really a problem. 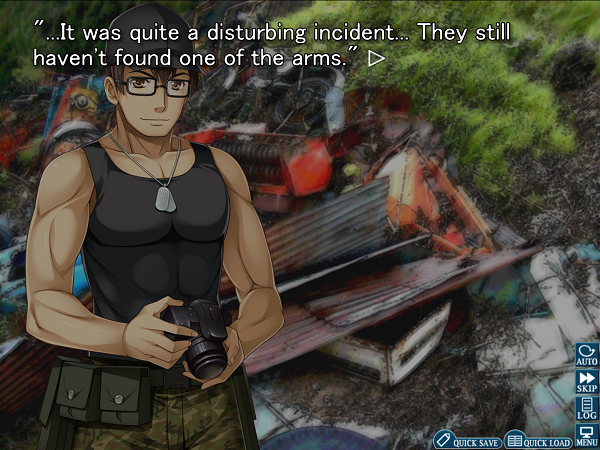 At a set point in the story, Higurashi finally kicks into full gear and reveals itself to be a psychological horror thriller. We learn that there is a cycle: each year, around the same time, one person will die and another disappears. This has been true for the past few years and this time it strikes close to Keiichi. Suddenly, the peaceful town of Hinamizawa seems to be against our main character and he begins to suspect that he himself may be next on the list to die. Is Hinamizawa still save? Is this the work of men or the curse of a vengeful God? And most importantly: can Keiichi still trust his friends?

The writing makes a turn at this point and goes from happy and joyful to pessimistic and grim. Keiichi’s observations about his surroundings and the people he meets become more negative and it’s interesting to follow his descent into paranoia as his situation becomes worse. This is the part where readers become more involved and the novel challenges you to think along with the mystery. Most notably, I found myself repeatedly asking whether or not I could still trust Keiichi himself, despite him being the protagonist. I seriously pondered whether everything was really against him or if he was just blowing a few misunderstandings out of proportion, yet at the same time a few incidents really are hard to just brush off and confirm his suspicions. 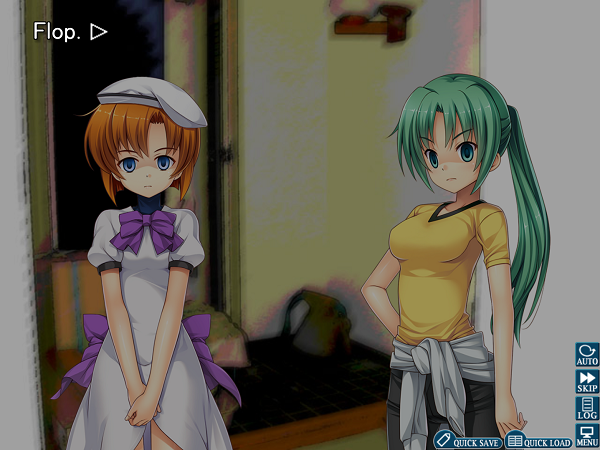 This is where the quality of the writing really shines through, as the violent segments can be downright uncomfortable. Going into this after watching the anime, I was worried if the limited visuals could succeed at making the key scenes work as well as they did in the show. Any doubts I had were quickly proven wrong, as the detailed descriptions and well-timed sound-effects were perfect for these scenes. I don’t think written text has ever made me feel squeamish like this before.

Speaking of visuals, this re-release makes drastic changes to the classic art-style that the original version used. For me, this is a major point in its favor since the old style looks absolutely ridiculous and I honestly can’t take the story seriously while looking at it. For laughs, I included a screenshot of it below, but as you can see in the other pictures, the new style is more in line with what you would expect from a modern anime. The characters and their costumes are detailed and vibrant, with many different poses and expressions for each one. Franchise loyalists who absolutely NEED the classic versions don’t have to worry either, as you can switch back to them in the menu and enjoy the renewed translation. 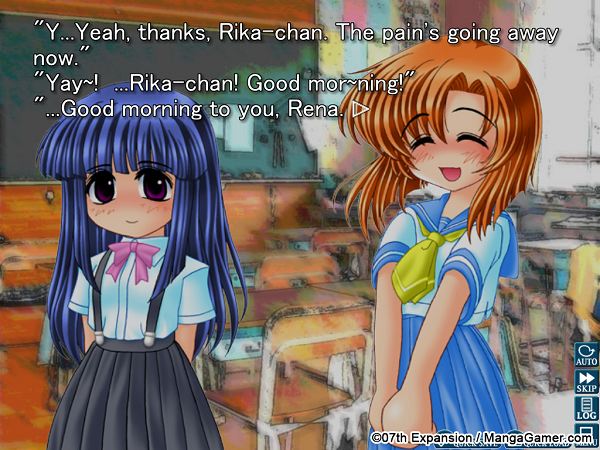 While the character art is new, nothing else has been changed and in some ways it ends up feeling like the work was only half-done. All backgrounds for the game are pictures taken in real-life with a bad filter over them, which clash uglily with the characters. Because of these, the game can’t display in anything other than 4:3 and any monitor with a different aspect ratio will leave you with giant, black bars on the sides of the screen. Also, while the characters do look nice, plenty of scenes play out without any on screen because they are thought processes or conversations with side-characters that don’t have their own art. This means you end up looking at the same, vaguely-related picture for a few minutes while a bunch of text is thrown at you. In even worse cases, it’s just a black screen with text, which makes the novel look like the world’s worst PowerPoint presentation.

Onikakushi is a great first installment in the series and this remastering does a reasonably good job at tidying it up for potential new readers. Manga Gamer is clearly performing a balancing act: on the one hand trying to appeal to new people and release the best product possible, while on the other hand trying to keep the rather scary veteran players happy by being as faithful as possible. Personally, I wouldn’t mind a few more sacrifices; make scenes nicer by giving minor characters art and re-do the tacky, old background pictures. As it stands, however, this first chapter is a gripping entry into Hinamizawa’s mystery, best enjoyed by returning players and those who watched the anime. New players are definitely welcome, but will have to prepare for hours of clicking through happy conversations and games of tag before the scares come in.