Despite it not quite fitting into the horror genre, there’s a certain aspect of Heavy Rain that’ll scare the hell out of any parent.  The thought of having a loved one ripped away from you suddenly is gut-wrenching–the mere notion of it being an innocent child  moreso. RoH reviewed Heavy Rain back when it was released, and we’re going head-to-head with the Origami Killer again, this time armed with the Playstation Move.

It was clear from the start that games like Heavy Rain were meant to be played with a peripheral like the PS Move, and its unique controls lend itself well to the peripheral.  Perhaps this is is why some are calling this game the best ‘ready at launch’ title for the PS Move?  You’ll be happy to know that unlike Resident Evil 5, the other ‘ready-at-launch’ Move title, all you need to do is download the free patch and you’ll be ready to rock.  Kudos to Quantic Dream, as it must have cost a tonne of man-hours to implement the Move control patch.

There’s not much to discuss here other than the controls, so let’s get right at it. 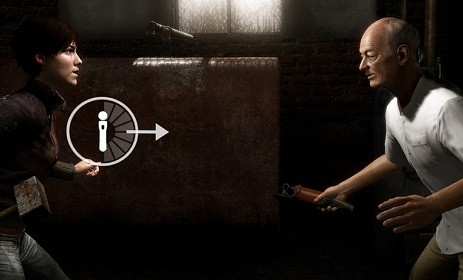 Each prompt with the Move controller requires you to push the trigger (unless it’s a series of prompts, eventually you can let go of it).  You can walk around freely with the sub controller, or the one half of the Dual Shock without having to press the R2 trigger as before, but almost every other action performed with the Move controller requires you to keep your finger held on the trigger.  It’s refreshing to be able to just walk around with the control stick and was a major gripe with the Dual Shock.  Whereas the Dual Shock’s motion-control was limited before, most other actions are controlled via gesture, combined with either the Move button or the trigger.  But that doesn’t mean that it’s gotten any easier.  These gestures are a lot more in-depth than ‘press X’ or ‘press square,’ more like ‘press trigger + move the controller from side to side, bring it into your chest, push it away.’  These gestures aren’t quite as simple as netting yourself a grand-slam in Wii Sports, either–they require a bit more precise touch, or sometimes a ‘very’ delicate touch.  There are also prompt-chains and timed events to work through as well.  As before, the game gives you ample notification on what to do. 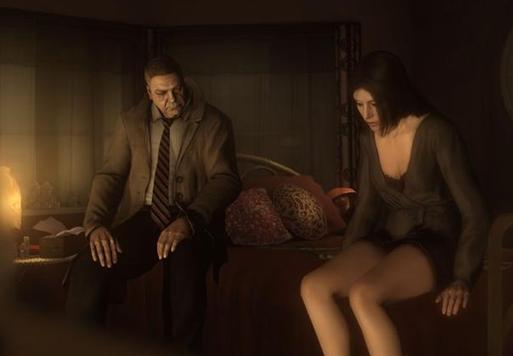 Some sample controls are pushing the controller out to extend your arm, pulling it in to open a door.  Twisting the controller to turn on a faucet, or moving semi-circle to pull cash out of your pocket.  Other controls consist of darts in a particular direction.  That being said, don’t expect to download the patch and blast through it easy-breezy.  For instance, getting accustomed to the controls, I wrecked Ethan’s architectural drawing and had the living snot beat out of Scott (twice…hehe).  And this is coming from someone who’s played through the Dual-Shock version more than a few times.  With the new controls comes new difficulty, but I can hypothesize that once you get accustomed to those controls, you’ll be blasting through prompts with ease. 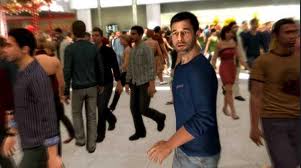 The X has been changed to the Move button, FYI

The thought, speech and pause menu have been re-arranged to suit Move navigation.  There’s also a new ‘look’ feature–point your cursor at the target and press the trigger and you’ll look at it.  Your character’s head moves around with the Move controller, point to the left to look left, point to the right to look right.  Sometimes this will cause the character to turn and face in the direction you’re looking at.

As in anything, there are some quirks to the new controls.  Like in the Dual-Shock version, there were instances where the gestures wouldn’t quite register with the system and you’d end up accidentally taking a leak instead of opening the bathroom door.  Some of the more agitating quirks involve not being able to properly see the contextual prompts, which was a problem before the patch as well, seeing as the prompts don’t appear in the same place every time.  The learning curve required to play a game that you’ve already played can be frustrating as well–like playing Super Mario World after not having played it for over 10 years.  You know how to play it, you’re just not as good as you used to be. Overall they’re pretty minor, but can really mar a good experience.

There’s not a whole lot that has changed about Heavy Rain aside from the controls.  It still features the same gripping and mature plot (for a video game) moving audio and solid graphics.   Adding Playstation Move into the mix really breathes new life into the game and sweetens the deal.  It’s a game that Ps3 owners should really give a shot if they haven’t already.  That is, if you can get over the whole ‘It’s just a bunch of QTE’s’ hangup.  But in all honesty, you’d be hard-pressed to find a better ‘ready-at-launch’ title for the Playstation Move.