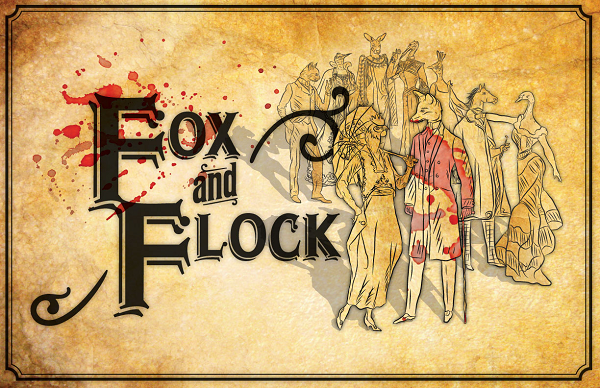 A grand ball is being held in the animal kingdom and all are invited. The guests are entertaining themselves, dancing and socializing, but something is amiss. Dancers seem to be disappearing, crunching is heard, and puddles of blood are left on the floor. There is a fox among the crowd, a predator seeking to use this day of festivity to feast on the unarmed animals.

Based on a board game that goes back centuries, Fox & Flock is a digital adaptation that brings the Scandinavian classic to a modern day audience. The game is played on a board with a number of tiles on it and is meant for two players, though the option to play against the AI is present as well. It’s an asymmetrical game in which one player plays as one or two foxes and the other as a number of other animals that is collectively known as “The Flock”. Both players have a different goal and means to achieve it. 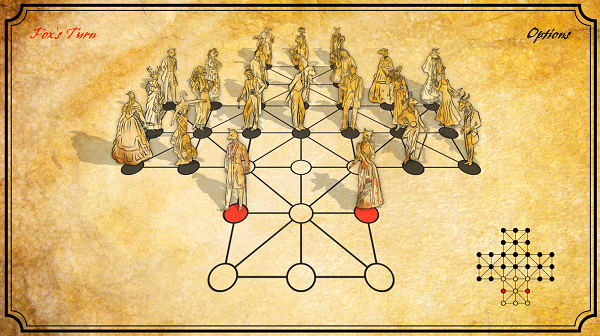 The flock are trapped in the dance room and, though they have greater numbers, are less agile than the foxes, so they can only move up and down on the board. To win, the flock must cooperate to corner the foxes or they must move nine animals onto the bottom nine tiles, allowing them to break open the door and escape. The player who takes the fox(es) must eat a set number of the flock, which can be done by being positioned next to an animal and then jumping over them. For this to work, there has to be an open space for the fox to land on, so if the animals stick together it’s impossible to eat them. To compensate for this limitation, foxes can move in all direction and have the option to “chain kill” if they land next to another animal with an open space behind it. This chain can go on for as long as the fox lands on tiles that allow for a kill to be made.

Okay, so there is a board game on Steam. Why are we covering it here? Well, because the team went beyond simply adapting an old board game and added a macabre art-style to it. All animals are represented with uncanny statues, half-human and half-animal hybrids that look a bit too realistically-proportioned. Add to that some blood effects that cover the foxes, eerie ballroom music, a disgusting crunch whenever an animal is killed, and you got a game that looks and sounds remarkably stylish despite its simple premise. 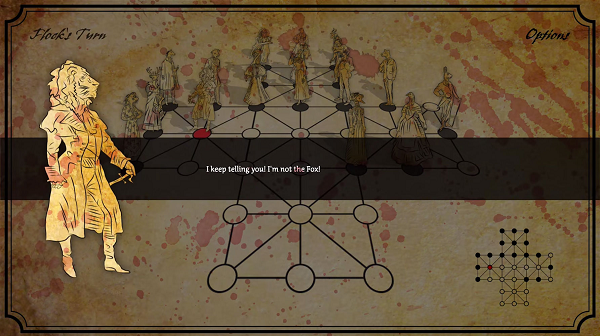 The game also includes a story, narrated entirely through rhymes. It isn’t very long, but tells an intriguing, little tale that gives some context to the gameplay and for a $2 game I didn’t really expect this much effort.

It’s a real shame that the core game isn’t really that great, which I know the developers couldn’t do a lot against. On either the classic or modern board layout, it’s very possible for the flock to play a perfect game and leave the foxes with no room to fight back. Sure, a single mistake can utterly ruin that strategy, but with a little care it isn’t hard to pull off. One issue the developers could have done something against is the local-only multiplayer, since I don’t find it very comfy to huddle two people around my gaming laptop.

A small review befits a small game; Fox & Flock does what it has to do and goes slightly beyond even that. It adapts an old board game, warts and all, and managed to give it a neat atmosphere and a brief story mode. The lack of an online multiplayer is a real shame, yet I can still recommend this as a fun budget-title for the puzzle game enthusiast.