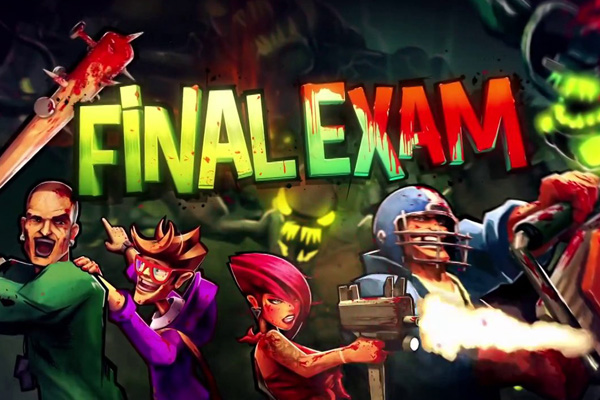 Originally an Obscure title, Final Exam released last year, and I must apologize for letting this great game slip under our fingers for so long! From Mighty Rocket studios, the guys and gals behind Obscure and Obscure 2: The Aftermath, Final Exam is a two to four player co-op side scrolling hack ‘n slash/beat ’em up/shooter; gobble all that! Available on the Xbox Live Store, PlayStation Network Store, and PC, this game is one that fans of horror, co-op, and bloody combo action can’t pass up.

In this game, you play one of four ex-high school students returning to their hometown for a reunion of classmates when they’re ambushed in town by little green mutants. Then you face eight levels of enemy rushing, bosses, exploration, some item-heaving & escorting with a wee-bit of platforming and you have Final Exam.

The gameplay consists of side-scrolling running, sprinting,  jumping, exploring large, multi-tiered levels and hectic fast-paced fuck ’em up combat. Each level contains seven soda cans to pick up as collectibles and two hidden weapons. Collecting everything in a level earns you points that can be spent on leveling up your characters stats (health, physical damage, gun damage, and explosive range) as well as separate skill points you can pour into small skill trees which unlock passive upgrades and combat skills to be triggered once a meter has reached a certain point. Combat skills range from engulfing your weapon in flame for more damage and doing a Hulk-Smash which literally clears the screen like an episode of Dragon Ball Z. Each of the four characters has different stats to pour points into, for example, no one will issue as much damage as the football player with melee weapons, even when they’re all maxed out. 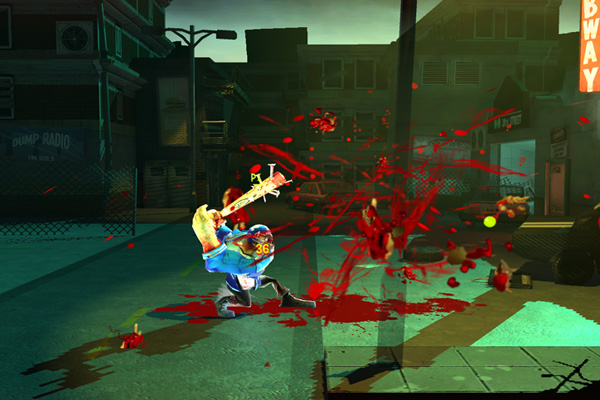 Combat in Final Exam is lots of fun and plenty tense. Some of the melee weapons available are crowbars, baseball bats, machetes and a chainsaw. In terms of guns, your typical array of a pistol, shotgun, machine gun, and rocket launcher, among others, serve your long-range destruction purposes. You’ll need to balance out your use of each to rack up your score that rewards you with skill points at the end of the level; each level you progress, the number score you need for those skill points increases, constantly pushing you to do better. Multiple times through each level, a big warning will pop up saying “Approaching Pack” which means you and your buddies will have to group up and stave off the onslaught of enemies; even if you’re spread out throughout the level, you’ll all be equally assaulted. As you deal consistent damage, you’ll begin a combo. Like in Devil May Cry, the more hits you get the higher your letter grade. Once you have a grade you can cash in your combo score then and there, or keep fighting for more and more, but if you’re hit one time, you lose the whole combo – so cash in appropriately!

In terms of enemies, everything is green and slimy, but there is quite the variation. You have your basic runners that rush and punch, four legged beasts that climb the walls and spit at you or roll over the ground towards you, and many variations of those two archetype’s as you go along. My only real complaint about the enemies is that one type of mini-boss is re-used again and again. Fighting him a couple of times was tolerable, but I think this guy shows up in almost every level, and you kill him every time, so he isn’t some sort of Nemesi- type creature. Making up for it though, the final boss (exam?) is really fun to take on.

As for the levels themselves, as previously stated, they are decently sized and some are absolutely gigantic; if you’re only playing with two people, some levels can take you over thirty minutes. Objectives in each range from eliminating killer plants to saving school children and escorting them back to a bus. They feel like your usual fetch and escort quests, but enemies are never far beyond, always keeping things tense and fun. Sometimes things can get annoying as you’re constantly bombarded trying to complete an objective, but hey, that’s why it’s co-op, isn’t it? The game has easy, normal, and hard difficulty settings. I finished it on normal, and attempting one level on hard my friend and I couldn’t even pass the first enemy rush, so there is quite the challenge and replay value waiting for those who want it. 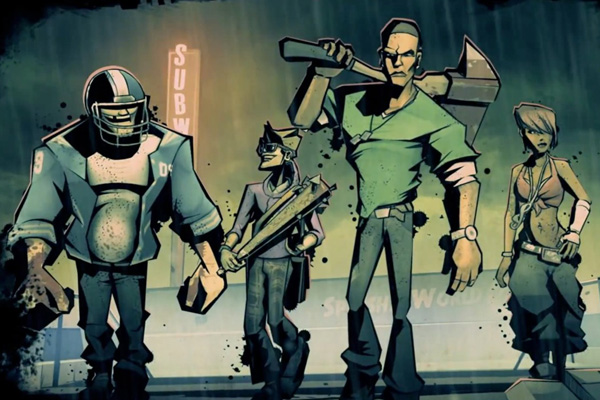 However, Final Exam is not perfect. Couch co-op allows two players to take on the horde, while online play allows four player co-op, but you and a friend on the couch can’t join two others online; it’s either two player co-op offline or four player co-op online. While the levels are huge and offer plenty of exploration and arenas for combat, some are re-used; out of the eight levels in the game, one is re-used two times. New objectives, items, and enemies are placed in each one, but two rounds of back-tracking was over-doing it for me. The re-used mini-boss gets increasingly annoying and you’ll be sick of his stupid hulking size and area of effect attacks by the end. Towards the end of the game you’ll come across scientists and high school faculty that seem to be key players in explaining exactly what the hell is going on, but the game is completely devoid of dialogue or cut-scenes, so really, you never know who the people you’re protecting or fighting are. I sense a little bit of an unfinished game here, but in the long run of things, this is a small complaint.

Looking past its flaws, Final Exam is a great game for $9.99 on all three platforms. To re-iterate, fans of beat ’em ups, side-scrolling platforming and exploration, and a bit of horror will feel right at home with it.