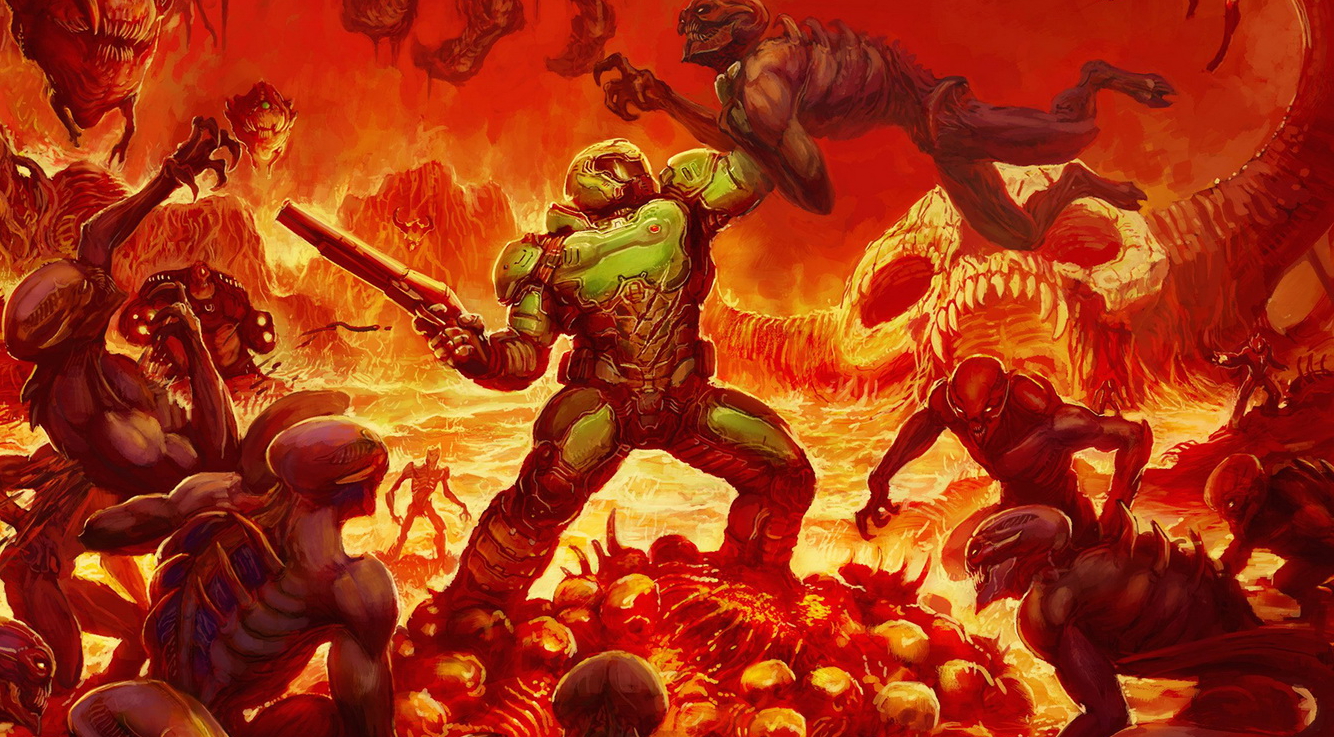 DOOM: a name synonymous with the FPS genre. A classic by every means, DOOM paved the way for shooters, horror games, and the scrutiny of the video game medium by the masses for excessive violence – and what it may do to impressionable youth. It’s been nearly 12 years since the last DOOM game released and a lot has changed; remember how DOOM 3’s campaign was a slow-paced survival horror romp eliciting dread from players? To hell with that shit, says DOOM, an unabashed power fantasy that’s faster and more charismatic than most modern FPS games. Id Software went back to pentagram-one with the new DOOM (simply titled DOOM), crafting a shooter plucked straight out of the early 90’s that’s a shining tribute to the original, for better or worse.

In the opening scene of the game’s campaign, the DOOM Marine awakes from imprisonment. It’s time to go to work again as the demons continue to overtake Mars. This quick intro drops the player right back into the world of DOOM, not directly tying this game to a main continuity, but simply stating “demons, Mars, gun, GO!”. Some 30 seconds into the game you’re already shooting and stomping demons into bloody pulps. That’s the pacing of this game: fast and chaotic. It’s immensely refreshing, and much like Wolfenstein: The New Order, it’s going to strike a chord with long-time shooter fans. 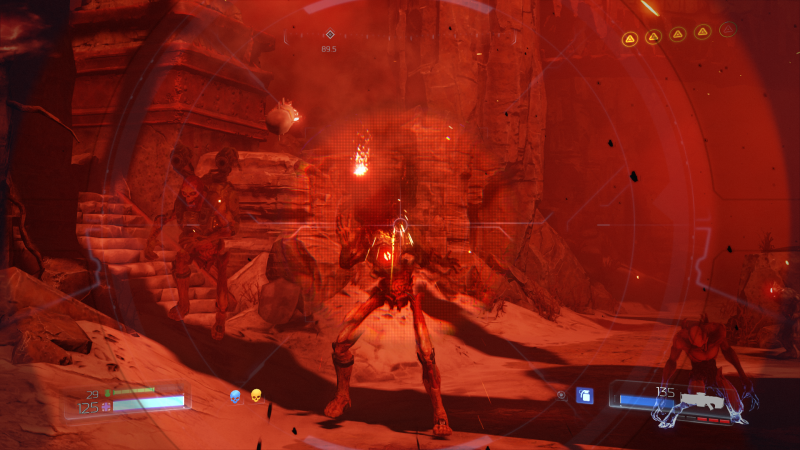 Everything about DOOM is straightforward, from its story to its gameplay mechanics. You’re the DOOM Marine and your mission is to stop the demons from claiming our realm. After you acquire the Master Chief-esque Praetor Armor, your journey is then guided by the head of the UAC Mars facility Samuel Hayden, former man now cyborg. He tells you what’s important, and you carry out his tasks, giving him some humorous attitude along the way. The DOOM Marine has no dialogue, and his primary personality trait is brutality as observed by his physical interactions with the inanimate and animate objects that get in his path. Preserving UAC research doesn’t concern him, he is only interested in killing demons. DOOM doesn’t take itself seriously at all, and that’s made very apparent by how the DOOM Marine subtly interacts with the world, from breaking a monitor issuing him a mission directive, destroying USC property, and outright stealing weapon mods from droids that technically require payment for their services. If you’re looking for a more substantial narrative, look elsewhere as this game keeps it simple.

This review would be incomplete without letting you know that DOOM has a fan-fucking-tastic soundtrack by Mick Gordon. Each and every encounter is accompanied by blood-pumping cyber djent industrial-metal. That’s a mouthful, I know, but the thrill of encounters for me comes from 60% gameplay and 40% accompanying music track. Combat often plays out like a symphony of violence, with weapon fire, screams and the sounds of bloody gibs contributing beats to the track. The music couldn’t be more fitting. 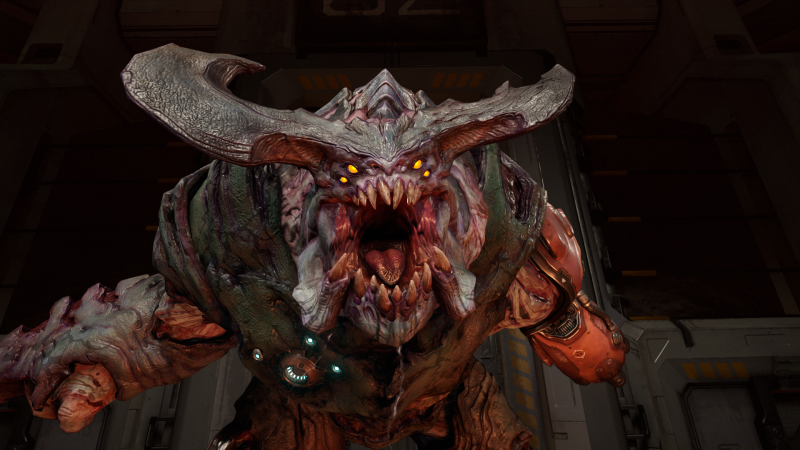 Let’s talk guns. Lots and lots of guns. DOOM has them! You’ve got your basic rounds-based guns and your futuristic nonsense guns like the Plasma Gun and the fan-favorite BFG. Weapons from past games make a return, in addition to the new Assault Rifle. Two mods for alt-fire are available for each gun, and world pickups such as Haste and Quad Damage alter their – and the DOOM Marine’s – stats. Each weapon can be upgraded using points obtained from combat and hidden level secrets. Hidden Argent Cell’s (the energy the USC has harnessed from Hell) boost the Praetor Armor’s base stats – health, armor, and ammo capacity. Each weapon discovered over the course of the game has a distinct style, but in them lies one of my first problems with the game: lack of feedback.

DOOM is all about killing demons with tools of carnage, but there’s a lack of feedback from weapons. Singling out the cause behind this is difficult, but per discussions I’ve had with fellow players, I surmise that it’s a combination of a lack of weapon physics (sway, recoil, movement) and sound design. Enemies merely don’t react physically to strong weapons unless the damage leads to death. Leaping foes should be propelled by the force of say, the rocket launcher or the super shotgun. And while I know that this is to keep the momentum of combat up, something about it just feels empty. There are a wide variety of guns to use with specific effects and advantages, but I never really felt “connected” to them. Melee “glory” kills also became stale over time, and I had expected a larger variety given they’re the secondary means of dispatching foes. Going back to Wolfenstein: The New Order, another classically designed shooter, combat there felt impactful; the guns in that game felt like they had punch. 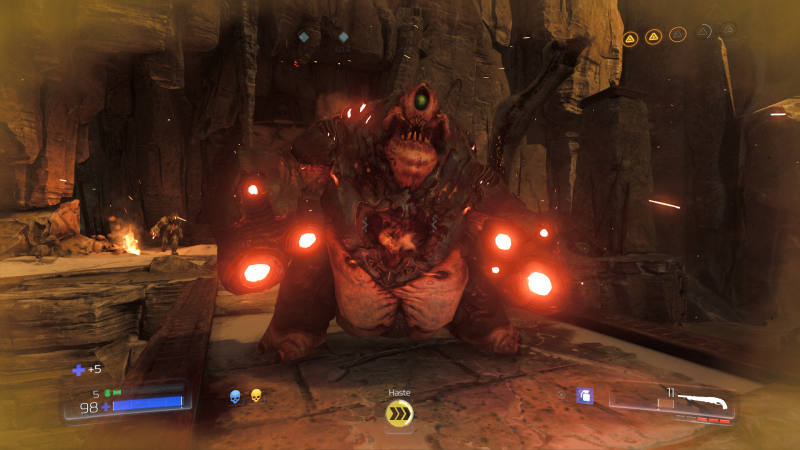 I respect id Software’s commitment to making an uncomplicated and faithful DOOM game, I really do, but over the course of the game’s campaign, I just wanted more. DOOM is comprised of arena after arena of demon fights – small, to large, to small again. Over the 10+ hours of DOOM’s campaign, this became repetitive as nothing too unique broke up the rhythm. I’m well aware that to many this rhythm is DOOM, but the game simply didn’t provide memorable scenes outside of the boss battles. The level design is great, environments are beautiful to behold in all of their hellish glory, and linear but branching paths are appreciated, but no standout events take place. This compounded with my limited sense of feedback from the game’s weapons brought my overall enjoyment to just south of great.

At this point, you’re either shaking your head and on the verge of telling me I don’t get DOOM. That maybe it’s not for me, but I truly do believe I do, and I appreciate it, but there were just a few things holding me back from being fully enamored with its extremely violent antics. There’s no question that the pacing of combat is exhilarating – moving from target to target, jumping and blasting off a shot and running through the pink mist of a fallen demonic foe. It’s fast, fluid and fun – and best experienced using M&K controls.

Perhaps in time I can begin to appreciate it more, though, but for now, there’s still more to the DOOM package to review than just its campaign. 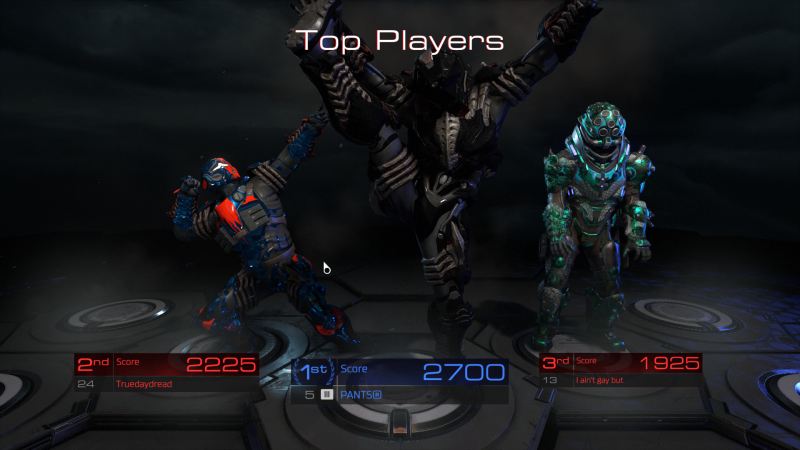 Admittedly, I wanted to write off the multiplayer to DOOM after playing the beta and being unimpressed. And I still kind of do because it’s just not all too appealing to me. But I gave it another fair shake while reviewing the game, and while it’s not for me, I can see its appeal to some. Unlike the DOOM campaign, the multiplayer portion of the game embraces elements of contemporary shooters, namely multiplayer ones. The mode shares strong similarities with Halo but with a pacing partway towards an arena shooter. The basic modes are available, plus some demon-centric spins. Players obtain experience from matches and can rank up, unlocking new items, passive perk “hacks”, and armors. Within matches demon runes appear allowing a player to transform into their pre-chosen demon form, each with different abilities. Players start with two guns based on their loadouts, and can toss grenades and perform melee attacks. Oddly, though, melee is reserved for weakened foes and cannot be done stealthily from behind for an instant kill, an odd choice given the speed of combat and limited opportunities for glory kills to occur.

Player customization is quite impressive, with options to swap individual pieces of armor, color them, and even add grit and damage. There are unlockable taunts parodying iconic dances and gestures like Carlton’s It’s Not Unusual dance from The Fresh Prince of Bel Air. It’s silly and charming.

DOOM’s multiplayer is very polished, but ultimately not very satisfying, begging the question, who is it exactly for? DOOM fans? Halo and Call of Duty fans? Arena shooter fans? I don’t think it satisfies either. I’m curious to see how it develops over time with post-release support. A season pass is available for multiplayer content, so if id Software aims to keep the mode alive with tweaks and changes, I’m willing to revisit it. 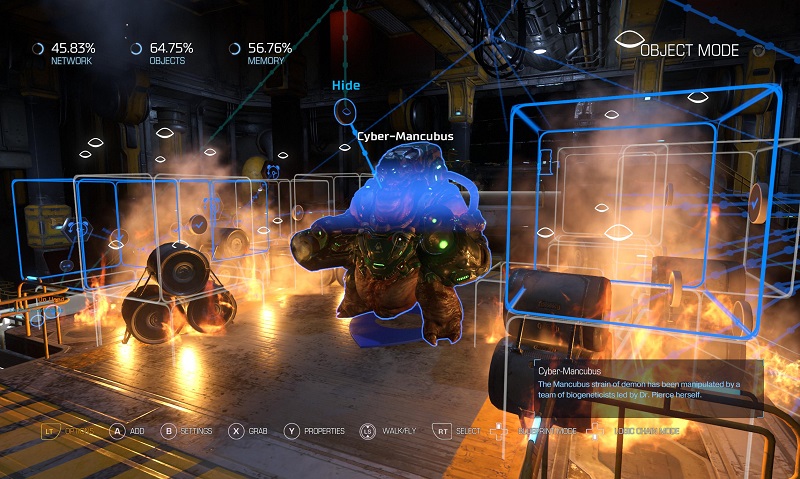 The third mode in the DOOM package is SnapMap, id Software’s new in-game map making tool. SnapMap has a lot of potential that I cannot wait to see tapped. Presently the best maps available from the community are fairly simple and underutilize the immense amount of tools the mode makes available. These consist of short levels to boring physics tests. I played around with map maker and came away impressed by how much functionality is available, for not just putting together maps piece by piece, but how players can effectively make a level with audio triggers, objectives, gameplay logic webs, unique visuals, and even some story bits. SnapMaps can be played with friends as well and shared across platforms on a community page.

While it’s great that DOOM players on different platforms can share with each other their creations, this parity appears to come at a cost to PC gamers accustomed to more substantial mod tools. DOOM lacks official mod support in favor of the unified SnapMap system, which is a shame given the series’ longevity thanks to the PC modding community. There’s no Steam Workshop support either unlike Bethesda’s Skyrim, meaning game tinkering is limited to just SnapMap. Regardless of how robust it is, this renders DOOM’s campaign mod-free and the passionate mod community in the dust. 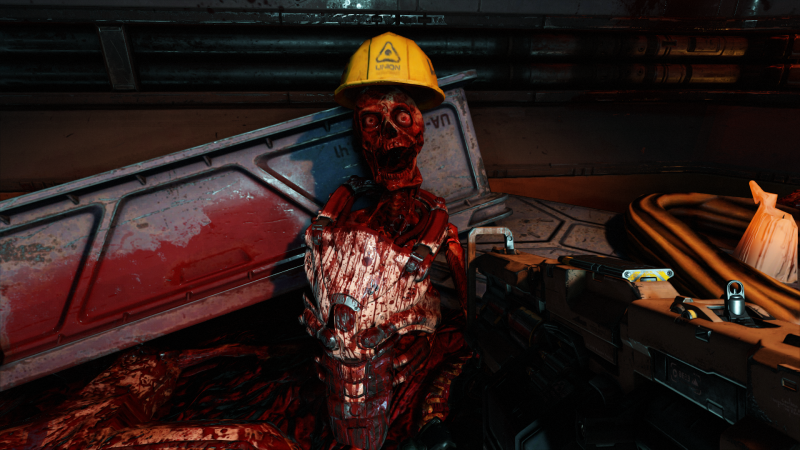 In the end, DOOM turned out to be a wonderful surprise. Bethesda’s singleplayer trailers leading up to the game’s release, and holding of review codes until launch day made many nervous about the quality of the game – but thankfully we were wrong. Id Software has honored the DOOM legacy and created a reboot that stands alongside the originals proudly. It may suffer from repetition, an uninspired multiplayer mode and lack of official mod support, but it’s a damned good reboot of a classic series. I’m excited to see what’s next for the DOOM Marine.