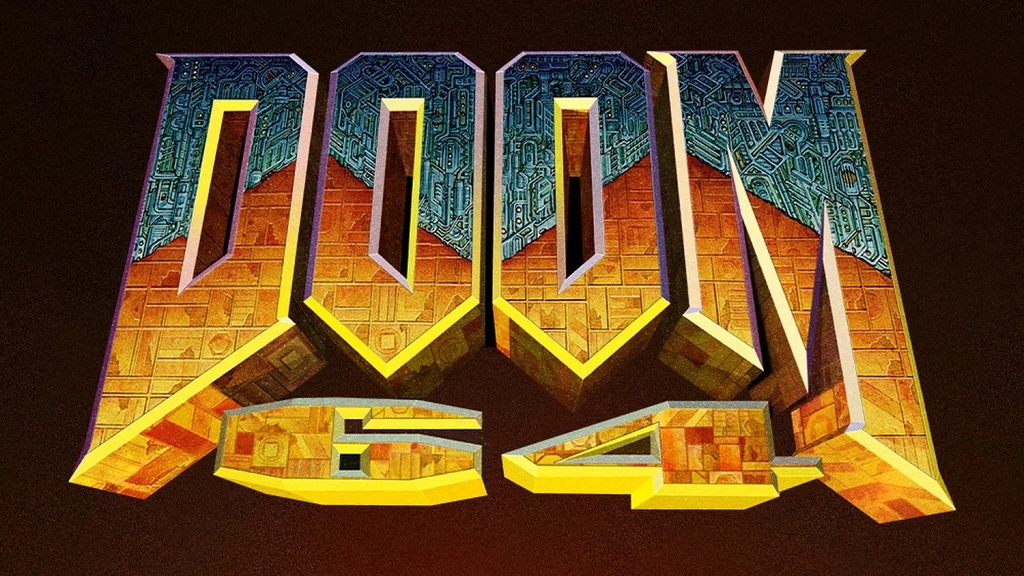 Back in 1997, Midway Games developed and released a Nintendo 64 exclusive Doom game, which, due to several factors, never gained much traction, receiving unfriendly reviews and many complaints upon its release.

After being largely forgotten for over 20 years, it was announced in 2019 that Doom 64 would finally see a re-release and remaster on all modern platforms to coincide with the release of the new Doom Eternal, which ties in with Doom 64 in several ways.

For those unfamiliar, Doom 64 was the only 2D Doom game to feature entirely new sprites and textures instead of the heavily recycled ones from the first Doom. All monsters, weapons, environments, lighting effects, and many of the sounds were created from the ground up by Midway when development started in late 1994, and this makes Doom 64 stand out in many ways above the other games in the franchise. 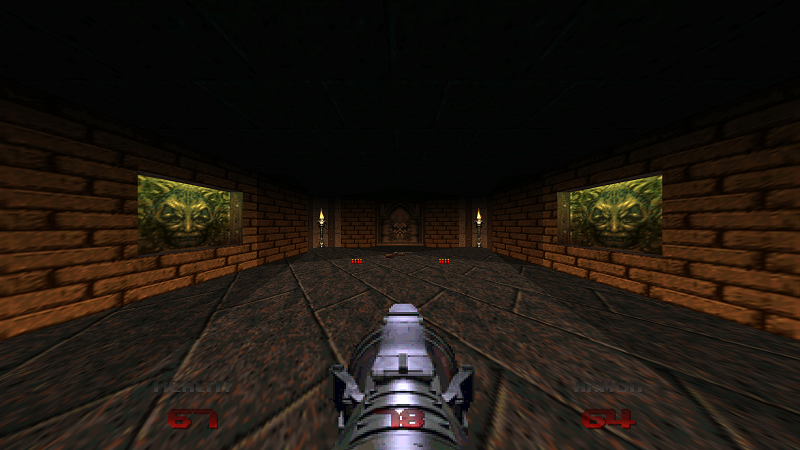 Personally, I never understood where all the hate for Doom 64 came from back in the day. I rented and played several hours of it when it originally came out and a few other times over the years, and always really enjoyed the different approach to the franchise that 64 brought. Even if there were a few technical limitations from the hardware at the time, it wasn’t felt all that much in the gameplay. Performance issues were par for the course in those days and most people didn’t even notice.

When you first pick up 64, it feels just like any of the other 2D Doom games you’ve played, especially if you’ve played the more modern console remasters with updated controls. However, as you keep playing there are many elements that come together to make the game stand out from all those other similar experiences, despite the controls being fairly standard.

64 has a very dark and moody tone compared to the others, with much creepier ambient sound design and very little background music, making the game feel more isolated and dreary. The developers of Eternal said this was the tone they were focusing on when designing the new game, using 64 as an inspiration during development. 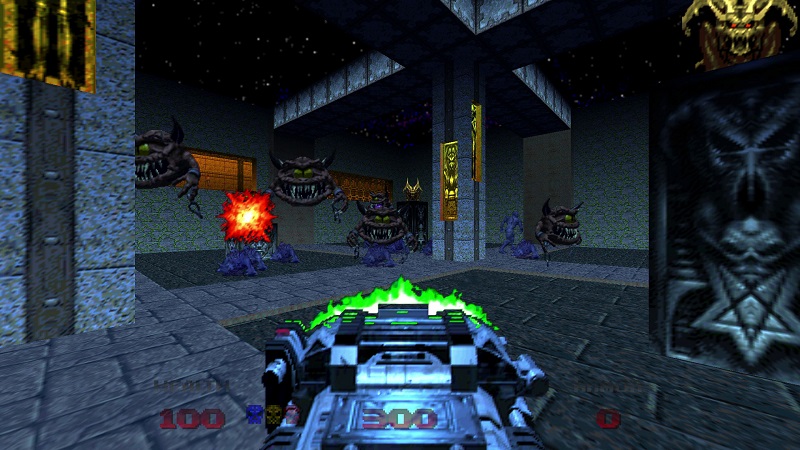 As I replayed through all of the game’s 30-some levels again in 2020, it became abundantly clear that 64 was even better than I had remembered it. The technological upgrades of the remaster certainly helped the experience in some ways, but even past the aesthetics, the game was a real joy to experience in ways that every other 2D Doom game from id Software failed to excel at in my book.

Delving deeper into what Doom 64 offers over its other 2D Doom counterparts, one of the things noticeable right away is that the level designs are much more fluid, less linear, more complex, and better paced than most of the levels from the other classic Doom games. The flow of the levels leads you to explore around more and gives you some extra clever visual cues from time to time, serving as a sort of virtual bread crumb trail to follow.

Instead of just getting hopelessly lost, frustrated, and ultimately bored of some of the levels, the answers to 64‘s puzzles and progression always felt like it had to be somewhere right under your nose and never kept me wandering too long. The levels flow smoothly with a little more modern FPS sensibilities and less of the archaic early Doom level design elements. Some advanced puzzle mechanics like shooting switches from afar, plus a few other small additions, along with all the other previously mentioned elements come together to make a less predictable and more exciting experience than what the previous two Doom games offer, by my standards. 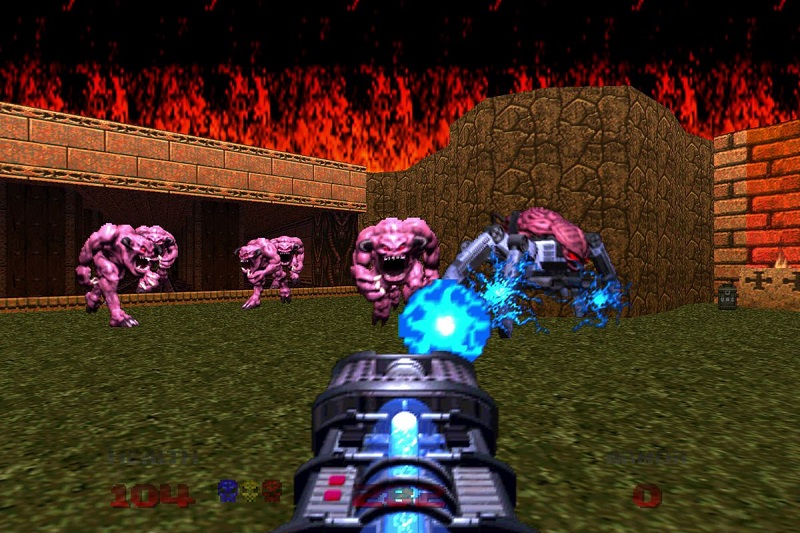 As for the gameplay itself, while it is very similar to the previous Doom games, with a lot of the same ebb and flow of combat, a number of little improvements scattered throughout the design lead to an experience that feels more snappy, visceral and just better all-around.

Most of the weapons are slightly improved or altered versions of the classic Doom 1 & 2 weapons, but all of them feel better to wield. More impact is felt from each shot, with slightly altered sound effects and recoil added to most of the weapons. These additions add to the immersion and the satisfaction of blasting through the hordes of enemies in your way. The general feel and responsiveness of Doom 64 almost make it feel like you’re playing Quake with unique 2D sprites, instead of 3D models for the enemies and guns, and that is a very good thing.

The visuals on this version can be slightly off-putting at first since the remaster uses a more advanced game engine than the N64 version, which runs much faster and smoother (up to 1000 FPS on PC). However, as a result, it also has a strange and fairly extreme stretching effect on the walls when turning left and right. It’s not quite enough to make you as motion sick as some other FPS remasters in recent years did, but it does take some getting used to at first. 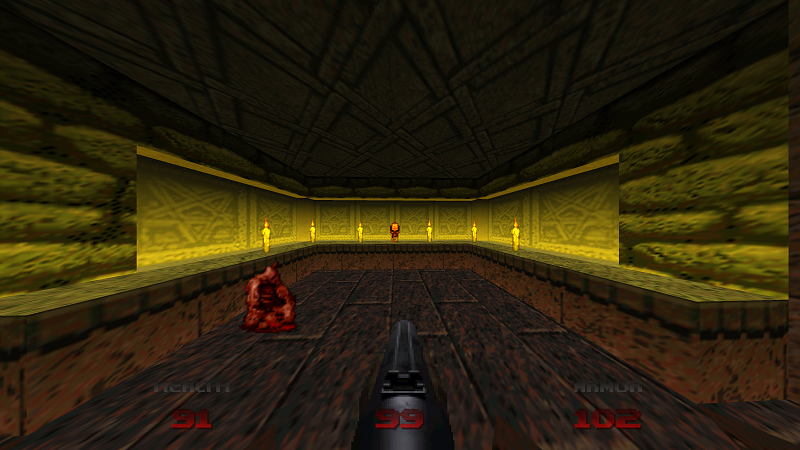 In the sound department, Doom 64 goes for a much more intimate approach, featuring very little music of any kind throughout its many levels, doubling down instead on ambient sounds including growling, screaming, and other disturbing background audio elements. Any music that does creep in every once in a while is a very slow, minimalist, brooding synths sound that mostly serves to set the mood rather than keep your blood pumping (like the previous Dooms had).

This remastered version features some wonderfully updated lighting and shading effects, making for a much more dynamic experience when it comes to light and dark. There are much-improved gradient lighting effects and more advanced use of light sources than the other 2D Doom game, used to great effect in the levels for tone and mood lighting. There’s also a new brightness option setting included which is a welcome addition and one that was sadly absent from the original N64 version. 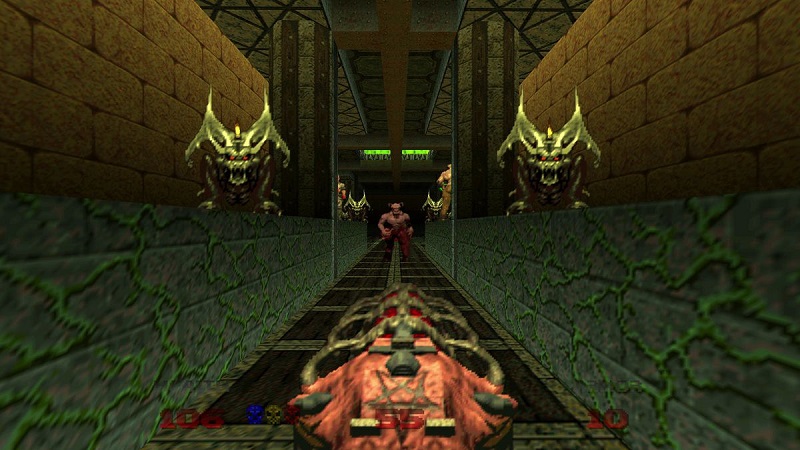 The controls feel great on consoles, with the ability to adjust sensitivity and many other options the early Doom games lacked, as well as additional options for toggling auto-run and quick save/load options that just make the experience that much smoother. Keyboard and mouse controls feel about the same as the other early Doom games, as you would imagine, though this is the first time players have officially been able to play Doom 64 with keyboard and mouse without using emulators on a PC.

This remaster also features a new campaign, featuring 7 unlockable levels that were cut from the original N64 release. Dubbed the “Lost Levels” these new maps are very consistent with the design of the original levels and quite fun to play through. On top of the levels that were restored from the cutting room floor of the original development, one entirely new level was also developed especially for this remaster that helps tie 64 into Doom Eternal, which is a nice little bonus.

Overall, Doom 64 looks and controls better than ever, and for the extremely low price of entry ($5 – or free if you pre-ordered Doom Eternal), any Doom fan should not miss this opportunity to visit or revisit this overlooked gem of the series, especially if Eternal has got you in the mood. This newly remastered version of 64 is well worth your time.