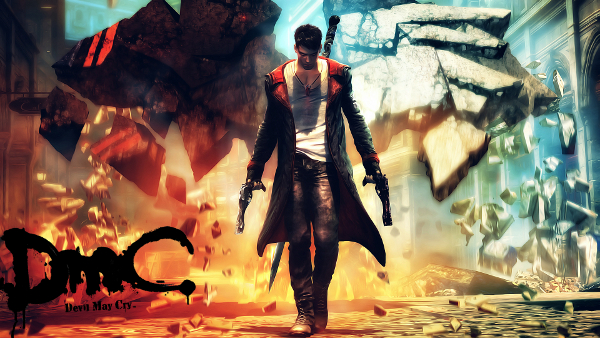 Capcom’s decision to reboot the series with a new developer, and more controversially, a new Dante, caused quite a stir in the fanbase. Developer Ninja Theory, known for Heavenly Sword and Enslaved: Odyssey to the West, came under much scrutiny after they revealed the contents of their Devil May Cry reboot. With a new Dante and a new story, Ninja Theory had to deliver a game from a well-establish series to many people who had already decided to dismiss the developer. One of the bigger concerns surround DmC—aside from Dante’s hair–stemmed from the combat systems employed in Ninja Theory’s past games, which were thought to far too simple for the likes of Devil May Cry. This put doubt on the developer’s ability to create a solid combat system that fans would come to expect from the series. Well, DmC: Devil May Cry is here, and let me tell you, combat should be the least of your concerns. Why? Because along with combat, Ninja Theory knocks it out of the fucking park with this game. Had DmC released in 2012, it would have easily been my GOTY. Allow me to tell you why. 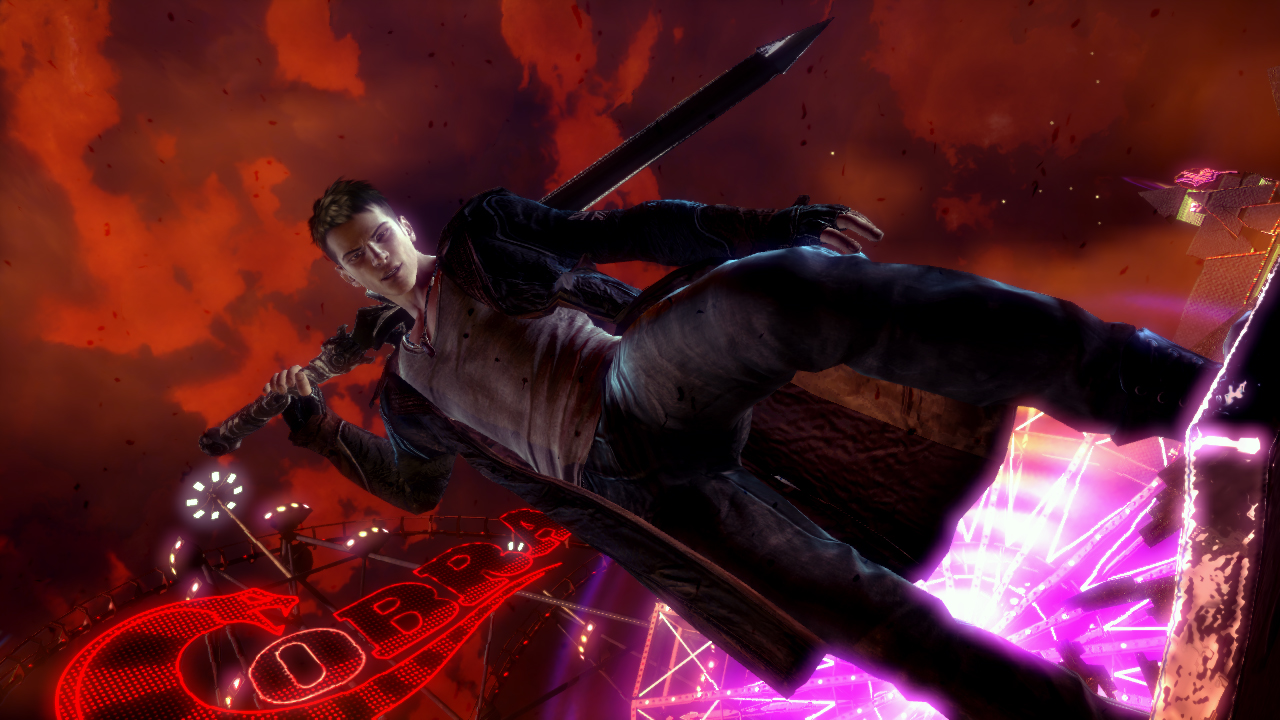 DmC reboots the series to a point before Dante became a hero. Combining aspects of both Devil May Cry and Devil May Cry 3, DmC places Dante at a point in his life where angst, alcohol, and partying are his only concerns—aside from demons that get in his way. Dante is a brash young adult that harbors the blood of both a demon, his father Sparda; and angel, his mother Eva, within his veins. This makes him a Nephilim. The strongest of the three races.

Kat, a young psychic under the command of The Order’s leader Vergil, Dante’s brother, is tasked with reuniting the sons of Sparda so that they can take on the demon king Mundus. Guised as a wealthy capitalist banker, Mundus reigns over mankind by enslaving them through money. Dept and finance. The story of is one that is both a social commentary to today’s current issues surrounding Wall Street and corruption, as well as one that focuses on the growth of Dante from loner to hero.

Devil May Cry 3‘s Dante was much about the party. The young and careless demon slayer constantly made mention of this as it was pretty much his catch phrase in the game. Where as he talked about the party, DmC‘s Dante crashes it. DmC‘s Dante may not win any awards for originality in character design, but he follows the same character archetype that Devil May Cry 3‘s Dante did. While one is a Western version of the badass hero who doesn’t give a shit, the other is the very same—minus swear words—but an Eastern, Japanese approach to the same type of character. Being an origin story, DmC introduces us to Dante while he was still young and carefree. Whether one prefers one type of cliched character type over the other, Ninja Theory has made sure to create a character that is both an outcast in a new world, and a character that shares traits with the “original” Dante.

DmC sort of plays it safe with its story by not venturing far from a predictable plot. Despite being a typical cut and dry story of a jerk become hero, it still surpasses past entries such as Devil May Cry 4. While it may be devoid of originality, for the sake of re-introducing a character we already know and how that character changes, DmC avoids being a convoluted mess by presenting its story without added fluff and indistinct plot paths. DmC‘s story fell a bit short than what I’d expect from Ninja Theory, but it delivered nonetheless. 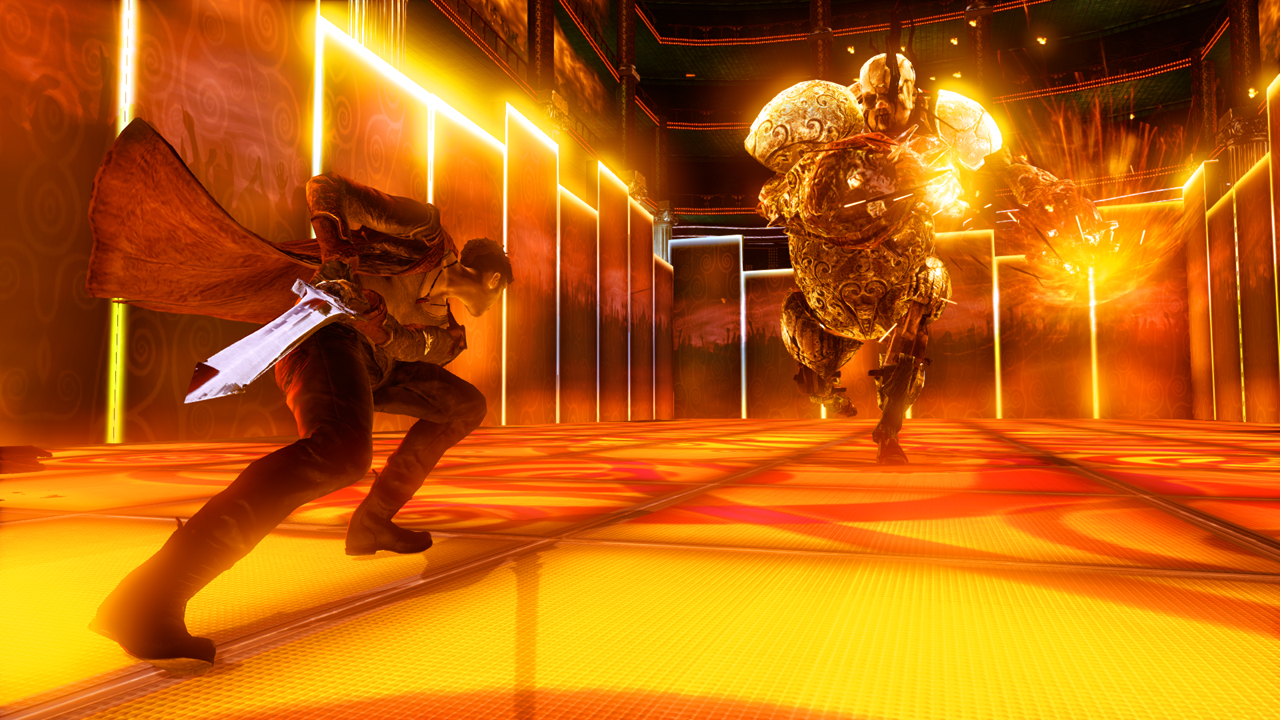 Ninja Theory has injected more style and flair into this game than expected. And while some may see their individual style as an offense to the series, DmC is an absolute rush to play. A strong sense of style pours from the game’s art direction, level design, and more importantly, combat. The combat of DmC is exhilarating. While it may not require the same level of meticulous focus needed to fully resemble past entries in the series, at least on normal difficulty, DmC‘s combat is fluid, precise, engaging, and visceral. Yes, it is easier to reach the coveted “SSS” rank, and that should have been adjusted to have more tiers, but that doesn’t stop it from being so damn fun.

Dante is equipped with both Rebellion: his iconic sword, and Ebony & Ivory: two pistols. Quickly into the game Dante begins to find new weapons that add a new layer of depth to combat. Melee weapons are set up into either two categories: angelic or demonic. Angelic weapons are blue and are mapped to the left trigger, while demonic weapons are red and mapped to the right trigger. Each weapon alignment comes with its own type of grapple move. The angelic grabs propel Dante toward an enemy while a demonic grapple pulls enemies toward Dante. This allows for Dante to move in, out, above, and around masses of enemies. Switching between weapons is a simple combat strategy to understand, due to the game introducing combat elements at a comfortable pace. Mixing and matching weapons, especially after a whole new set is unlocked, makes combat an intense ballet of carnage. Devil Trigger aids in battle by slowing down enemies making them vulnerable. This gives the player some time to breath and take down enemies with a boost in damage. My issues with Devil Trigger pertains to how short it lasts and how it propels enemies into the air rather than just slowing them down. Having to deal with enemies in the air, or bring them down takes precious time from the already short Devil Trigger ability. 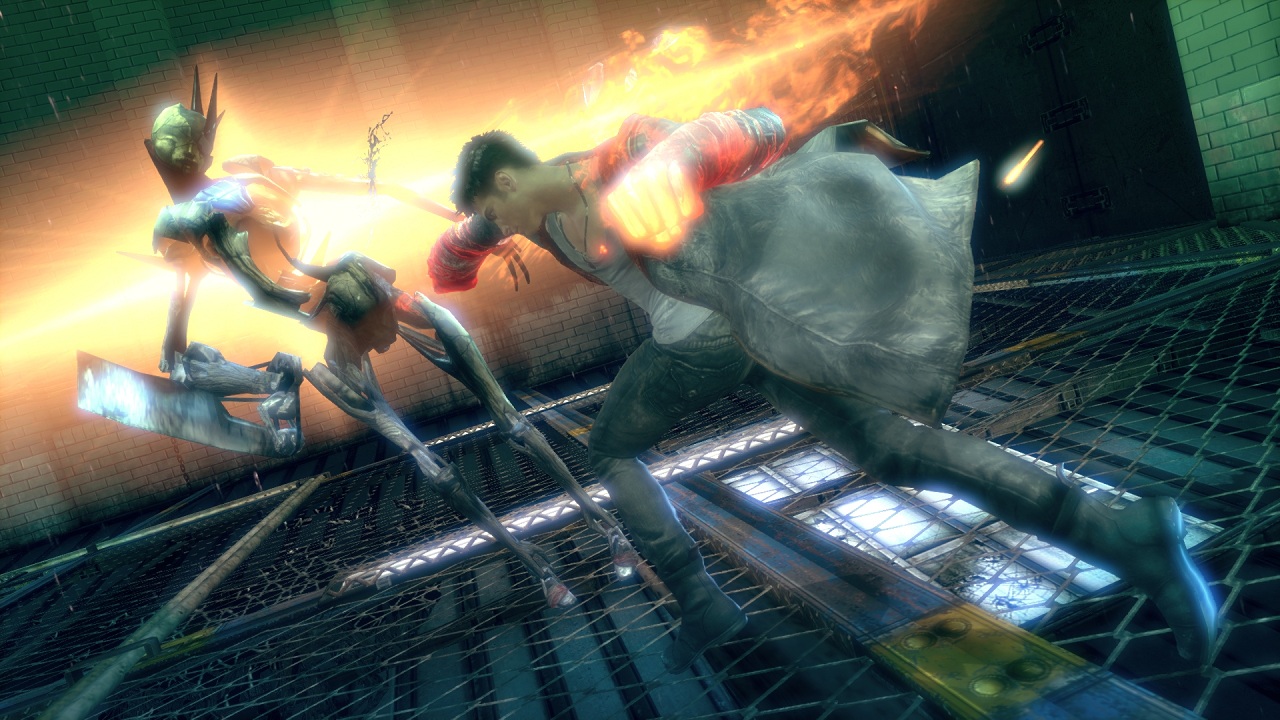 While the mechanics are very easy to understand and learn, it takes some practice to master. Successfully eliminating a crowd with a mix and match of weapons and grapples is such a rewarding feeling. The inclusion of enemies that are only vulnerable to either angelic or demonic weapons adds an increased demand for combat strategy. Besides possibly raising combat grade requirements so that players can work past what it takes to reach an SSS rank, combat desperately needs a taunt button for the simple reason of making enemy encounters that much more engrossing. It would be a small addition but one that would exemplify Dante’s cockiness and make the player feel the same.

Much like the older games, DmC allows for players to purchase items and combat upgrades. While items are purchased using red orbs, upgrades are purchased with upgrade points. Each point allows for one upgrade to be unlocked. Removing a specific cost to a combat upgrade takes away the unneeded annoyance of choosing items over new moves—something that I did not enjoy about previous entries in the series. As expected, both the health and Devil Trigger meters can be extended via purchasable upgrades (as well as by collecting four pieces from Secret Missions in order to form a full upgrade item).

It would be hard to talk about this game’s sense of style without mentioning its soundtrack. Perhaps it is because I have been a fan of Combichrist prior to this game, but their involvement, along with Noisia, propelled the intensity of this game forward. The music in DmC accentuates numerous scenes and levels to awesome proportions. Deep bass electronic music fits this game perfectly. The harsh electro-industrial sounds permeate the game and add additional adrenaline to scenes and combat. It’s hard not to gush over this, because in combination with the the general attitude of Dante and the game’s hyper stylized anarchist motif, DmC knows how to rile you up in more ways than one. 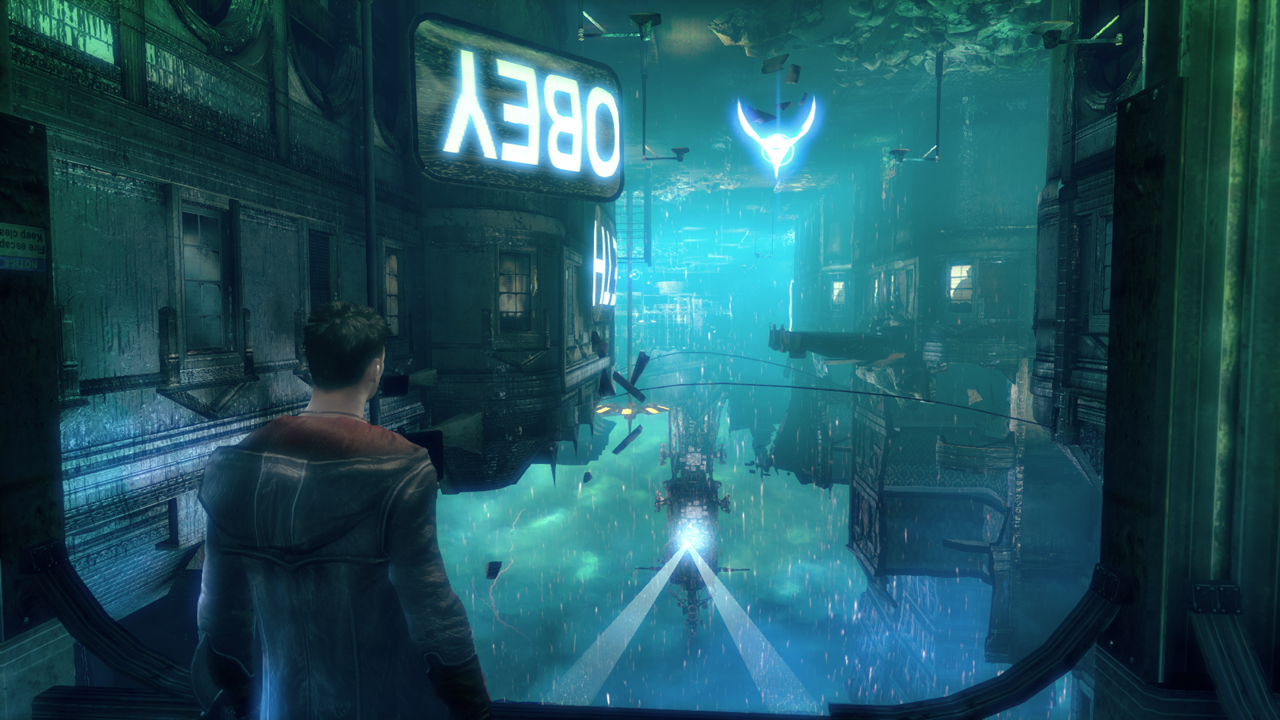 Ninja Theory knows how to use colors. In a generation of many shades of brown and gray, Ninja Theory’s Enslaved: Odyssey to the West was a sight for sore eyes. Continuing with their affinity for strong, vibrant color palettes, DmC is a beautiful game. Many areas feel unique as vibrant colors become dominant. A large portion, if not all, of the game takes place in Limbo, a visually striking world alongside our own. A world that demons inhabit and move freely without being discovered by mankind. Subliminal text within environments bring the movie They Live to mind, as demons use subliminal messaging to further control humans. Limbo is a distorted reflection of the real world, and as such, environments are jumbled, broken, and abstract. To traverse these environments, weapons act as tools. Whether to swing across a gap, make a platform, or remove a barrier.

DmC takes the player to many different locales. Environments are enjoyably diverse. A negative that a Devil May Cry purist might take from this type of diversity is that DmC adapts more of a linear approach. Where as the original games allowed Dante to essentially move backwards through areas, DmC plays by a level-by-level basis. Each mission is its own environment without the ability to open a door and find yourself back at the previous level. This linearity leads into the game’s removal of extensive backtracking. Without puzzles that require players to find and item to move along to continue the level, backtracking is not needed. Whether the lack of puzzles, thus the lack of backtracking hurts the game, marks a preference of the player. One such preference that revisits the “is this game Devil May Cry enough?” argument. To me, puzzles would have been welcome but I’m not hurt too much by their lack of a presence here. Would they have added to the gameplay? Of course.

Upon completion, DmC provides a lot of replay value. Secret Missions that can only be opened by hidden keys are scattered across levels. Inaccessible areas in early missions can be accessed with weapons and skills that players will unlock later into the game. The ability to replay any level at any time with current skills and weapons allows for players to choose exactly what they want to do, whether it is find and complete unlockables, or grind for orbs for a future level. With so much to find and collect, as well as several difficult modes, DmC will definitely keep completionists occupied for some time. 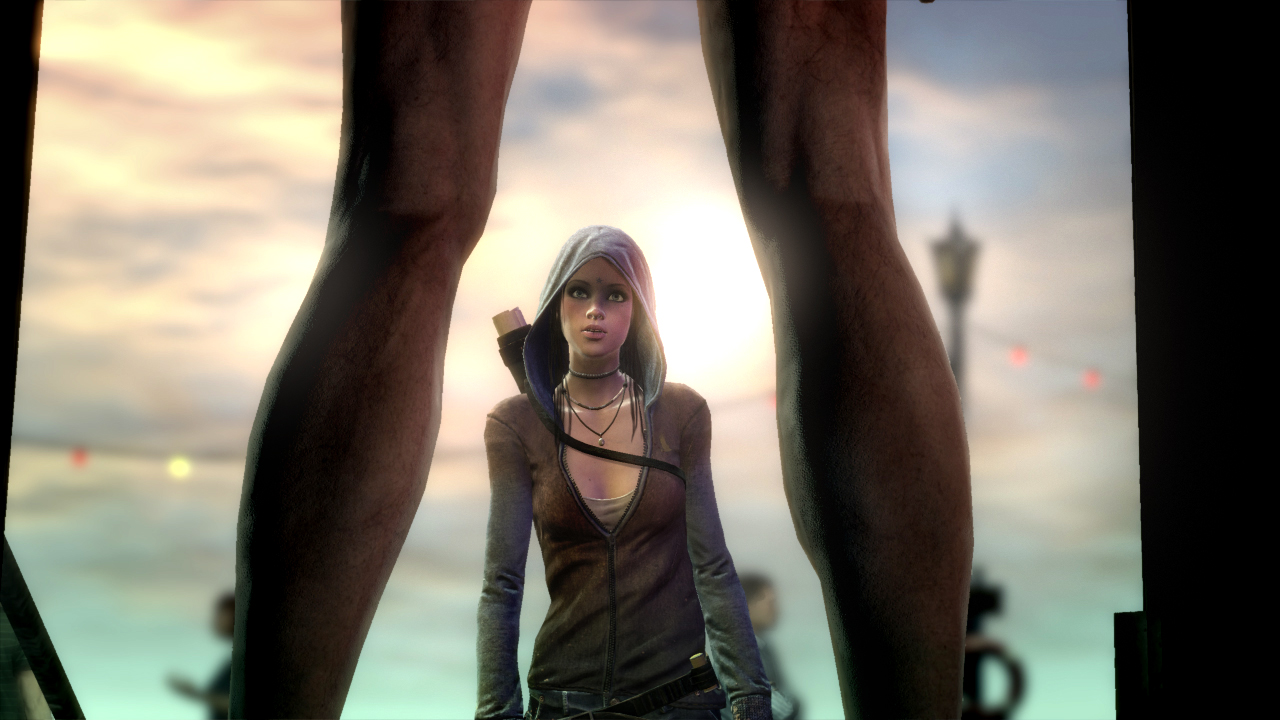 DmC is quite possibly my favorite Devil May Cry game. Deeply saturated in a sense of style, all aspects of the game are sinfully gratifying. Ninja Theory has taken this series and made it their own. With surprising refined combat, beautiful level design, and an interesting story sprinkled with humorous social commentary that makes fun of the likes of FOX and snack food companies, DmC is easily one of the most enjoyable games that I have played in a long time. If you’re a Devil May Cry fan that refuses to approach this game simply because of what it isn’t, then I’m sorry for you. It might not hit the right note for some people, but it successfully got my blood pumping and I can not wait to see what Ninja Theory does with this series next.