I went into playing Dear Esther with no pre-conceived notions of what it was..  I’d actually not even heard of the game until site staff had suggested I give it a whirl.  I took a precursory look at the game’s website, but didn’t delve too far into it.  So going into the game, I was completely blind.

What I’ve found during my playthrough of Dear Esther is that it’s hard to classify what it is.  Is it a game?  Or is it simply an interactive narrative?  An experiment in interactive art – a haunting experience regardless.  Dear Esther is unlike any other game I’d ever played before – and that’s one of the things making it truly special.

When I was younger, I had this recurring dream. I was in a field – one that I had thought to be Hyrule Field –but it was somehow different.  For one thing it was at night, but that wasn’t the unusual part.  The whole dream was filled with such bright, almost unnatural colours yet was filled with such a dreadful, somber feeling.  It was incredibly vivid and atmospheric, but what stuck out most was the contrasting feeling it conjured up.  This is the overall feeling I took away from Dear Esther.  It’s beautiful, with extremely somber overtones and deep symbolism. 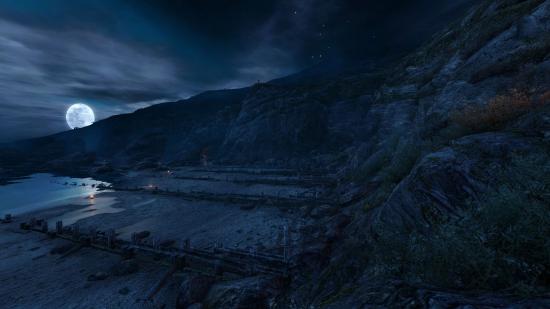 Lit candles litter the landscape.  Who put them there?

The game follows an unnamed protagonist, voiced by Nigel Carrington as he completes a trek through the island.  Exploring different areas, he narrates fragments of letters written to a woman, Esther.  It’s through these letters that the player gets their exposition and tiddly bits of story from.  The story in the game is intriguing, however it’s something that I wish there were a little bit more of.  The method in which the story is told requires a lot of piecing together. Since there’s so little of the story, I won’t go into much detail about it and instead rely on the official description.

A deserted island…a lost man…memories of a fatal crash…a book written by a dying explorer.

This game pushes the Source Engine to its limits, featuring some intense visual effects.  The game takes place on a deserted Hebridean island.  Caves light up with eerie, mystical light.  The cliffs, water, rocks even grass and sand show beautiful detail.  The island feels like a living, breathing, albeit completely empty place.  The isolation the main character must feel is enormous.  There are broken ships scattered on the beaches, empty, dilapidated huts torn apart by years of abandon seem as if they were just inhabited yesterday.  Even the narrator talks as if there were once many, many people on this island, but nary another soul to be found. 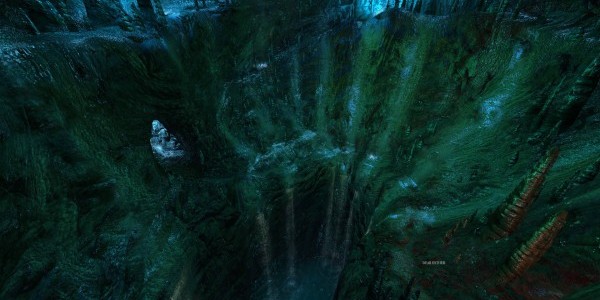 The other notable thing about Dear Esther is the audio.  It’s stunning.  I really wish that there were more words to describe it, but there simply aren’t.  It fits so perfectly with the rest of the game, helping create those somber feelings, yet also helping to foster an unsettling atmosphere.  Stepping into caves, broken tones and out-of-place sounds had me wondering ‘wait!  What’s going on here?!’ giving rise to the hair on the back of my neck.

The specially commissioned soundtrack from Jessica Curry is also available separately should you want to have a listen.

A double-edged sword of Dear Esther is its simplicity.  It’s refreshing to see a game that encourages you to explore on your own without explicitly telling you what to do.  There’s no instruction in Dear Esther on what to do or where to go – you kind of find this out for yourself and sometimes it ends badly.

Case in point, at the beginning of the game I walked out into the water at the starting beach.  One thing lead to another and I drowned. As visions danced across my screen, I was told to ‘come back’ which…not creepy at all, no sir.  However once you know what to look for, it’s easy to figure out which way to go.  Follow subtle visual cues that lead you to your next destination.  Or – as is often the case – go the only way there is to go.

Other than exploration, there’s no other gameplay elements to be found in Dear Esther (aside from the *not drowning* bit).  You walk, you look around, and look a little bit closer with the left mouse click.  That’s all.  You can play through the game multiple times to gather all the pieces of the story, but it always ends the same way.  And despite that beautiful scenery and extraordinary atmosphere, some people might complain that ten bucks is a bit steep for what the game offers.  There’s not much left to Dear Esther after you strip away the mystery of the story, meaning there’s not much reason to venture back to the island.

Some might claim that ten bucks for Dear Esther is a bit steep.  For an experiment in interactive art that only lasts at the most about 3 hours, I’d have to agree.  For all its accomplishments, this is definitely something you’ll want to wait for a Steam sale for, or would make a great addition to the Humble Indie Bundle.  I have to commend the fact that this came from an award-winning, experimental first-person experience, but I can’t help thinking that ten bucks is a bit much, considering that there are considerably meatier experiences available for less.

However if you’re looking for a truly unique, haunting experience, then Dear Esther is an experience that I can strongly recommend.  If you’re unsure of whether you want to commit an investment, take a look at the original Source Mod.  Some considerable work has gone into upgrading it for this release, but you should be able to get a better idea of whether you’re willing to make the ten dollar investment from the Source mod.