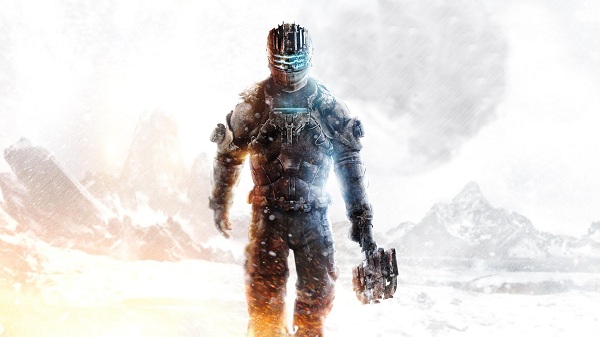 Visceral Games has had two years to create a successor to Dead Space 2. In that time, fears of whether the series would retain its survival horror roots have been expressed by many fans and critics. Electronic Arts, publisher of the Dead Space series, has been said to persuade sequels to their IPs to become more action oriented and more accessible to the casual gamer. I shared this fear when it came to the Dead Space series, because it, being of the survival horror genre, had the most to lose from mainstreaming—losing its core survival horror elements for the sake of being more marketable. With Dead Space 2, my fears where quelled. Now, with Dead Space 3 completed, I’ll tell you if these returning fears have become justified or shot down once more.

Dead Space 3 begins several months after the events of Dead Space 2. Isaac Clarke, series protagonist, has lived a sheltered life after his second ordeal with the Necromorphs and Unitologists. His relationship with Ellie Langford went sour shortly after their escape. It seems Isaac was too damaged to hold a healthy relationship–who would have thought?

Isaac’s adventure begins when EarthGov soldiers raid his apartment to pull him back into the nightmare that he’s been avoiding for so long. With Ellie Langford a part of EarthGov’s plans to prevent the Unitologists from achieving their perverse unification, Isaac reluctantly joins the group in order to reunite with her. 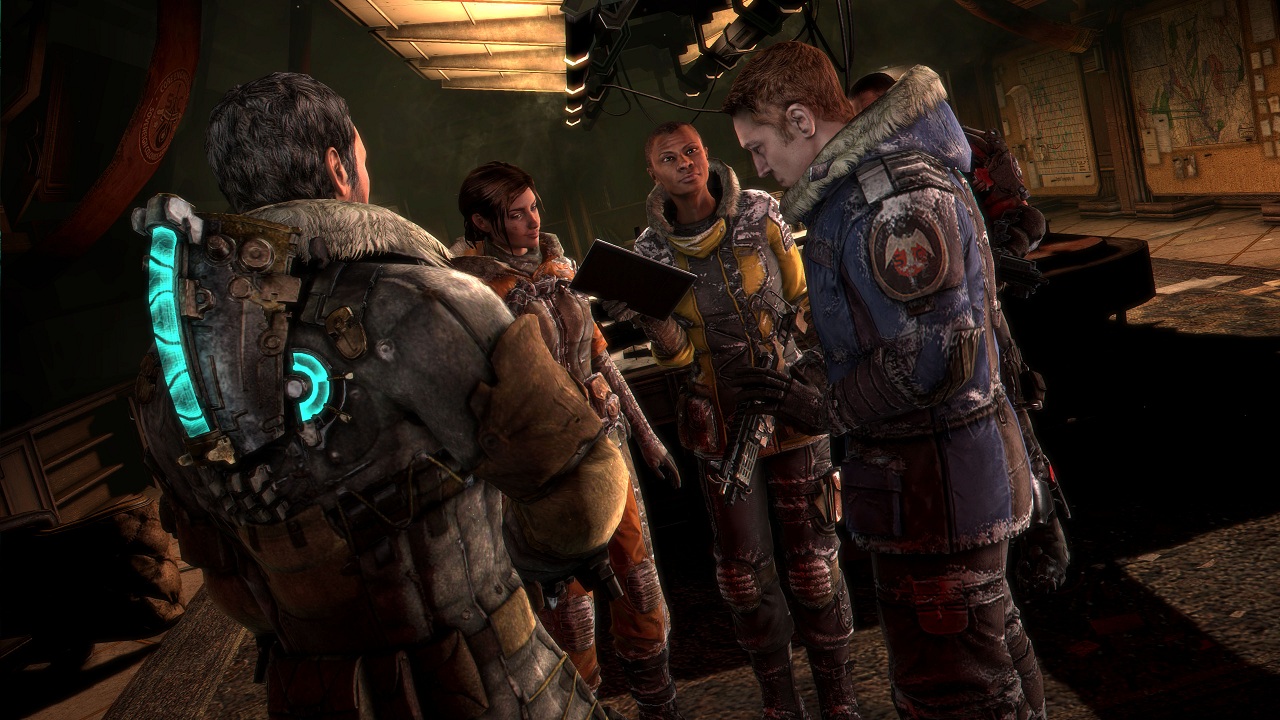 The Unitologists have become a significant force to be reckoned with. Armed and ready as a terrorist group, run by an evangelist by the name of Danik, they storms into the Lunar Colony that Isaac hides within. Their goal is to kill Isaac and prevent him from stopping their plans to complete Convergence. Known as the “Marker Killer” to Unitologists, Isaac has more than just Necromorphs to fight in this game. This time the plot is a bit bigger in scale than the last. Instead of simply stopping and escaping a Necromorph outbreak, Isaac and co. look to uncover the origin of the Markers.

Danik is an interesting antagonist as he provides us a face and character to focus our hatred at—this is something that the Dead Space series hasn’t exactly seen before. With the goal of stopping him and preventing what he sees as the right thing to do, Danik offers up some narrative variety from the last few games, but he ultimately falls short of being a truly menacing character because we know so little about him. Stronger whispers of Danik’s existence in prior games or material would have given him some depth and backstory; within Dead Space 3, he just appears, in hopes that the player will have a name to scream when they’re moving ahead in the story. 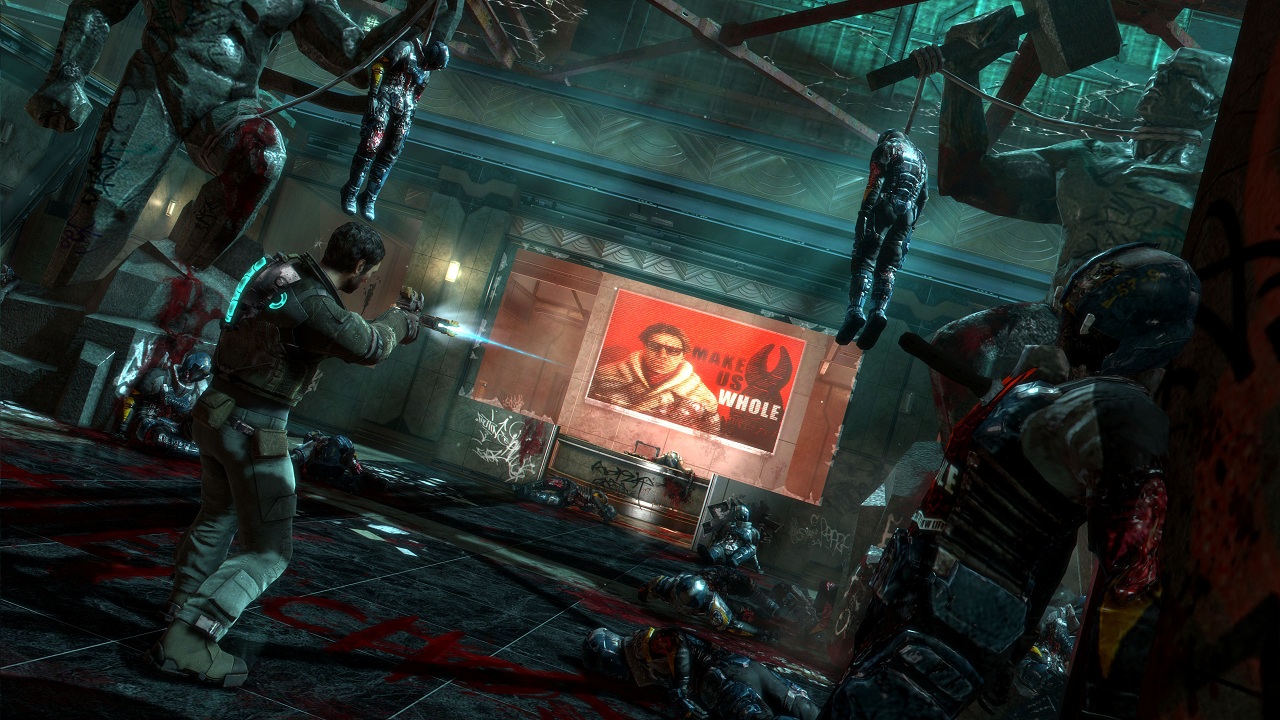 This lack of character depth extends into the other characters as well, including Isaac. As a man who has faced these type of attacks before, Isaac rarely expresses how much he’s fed up with the situation. Aside from the re-introduction of Isaac, he hardly conveys how he’s feeling and what his internal struggles are—these things are reserved for a few moments at the start and end of the game. Ellie Langford plays the role of being a driving force for Isaac due to his continued love for her, and while there is some nice tension between her new boyfriend and Isaac, it comes off as a simple feud rather than something that could have been enhanced by writers focusing on the Marker signals ability to mess with people’s heads.

I absolutely love how much happens in Dead Space 3; it’s a full blown story that spans numerous environments. But that doesn’t prevent it from having flaws. While it’s significantly more ambitious and feels like a proper adventure of the utmost importance, it has weak moments that left me questioning hours of gameplay, because I knew that a twist was approaching. It’s a haphazard negligence and disrespect to the player, assuming that we haven’t been paying attention to the last few games.

This time Isaac is not alone in his journey. If you so choose, co-op is available to play, the second player being one John Carver, an EarthGov soldier tasked with retrieving Isaac and helping Ellie’s team in stopping the Unitologists from completing their goal. In co-op, Carver acts as the the second player. Co-op exclusive missions unlock for Carver, and explore his past–the Marker’s effects being focused on once more.

Sure, co-op will reduce tension if you find Dead Space to be absolutely chilling, but it’s very fun playing with a buddy. The downside being the narrative of the game not being fully adjusted to match the events of co-op or singleplayer. Cutscenes designed for solo or co-op play are easy to pick out when playing the opposite mode. This left me questioning a character exchange that was not warranted due to limited communication between Isaac and Carver, and continually asking myself, “why was Carver just ignored, right now?”. Initially, I was very impressed by Visceral’s approach to co-op. Having the story adjust itself to whether solo or co-op play was being done, is a great idea. Unfortunately, Visceral needed to go the extra mile and account for the co-op player’s presence a bit more. Play the prologue of the game with a friend, and you’ll see what I mean. 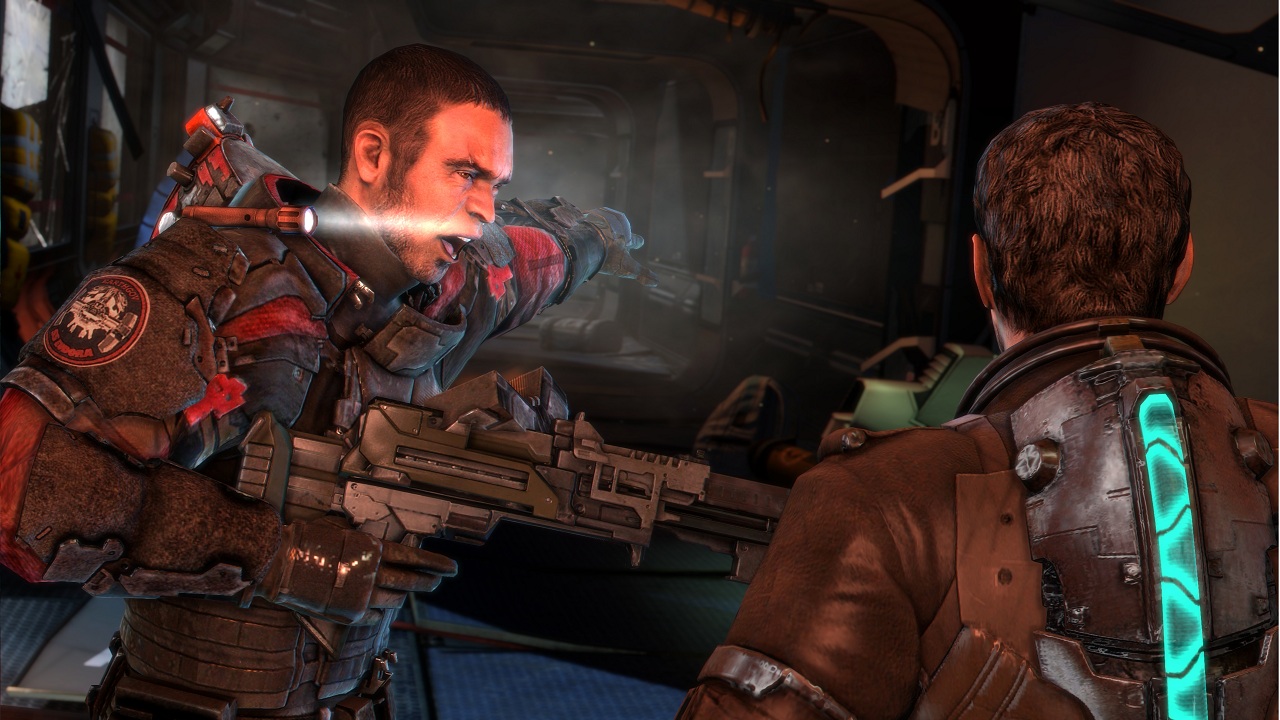 In surprising twist, I actually think I prefer playing Dead Space 3 in co-op. What Dead Space 3 lacks is a strong narrative. Isaac, as a character, should be in ruins, upset and angry. He rarely communicates his dismay with the situation anymore, unlike in Dead Space 2. Isaac feels a bit unreceptive when he’s not within a cutscene. It’s not that his personality is different, or his voice acting (which is still great, as most of the characters), he just says too little. Co-op remedies Isaac’s lack of contempt for being forced into yet another adventure. Exchanges between Isaac and Carver felt needed for me to continue to enjoy Isaac’s presence on screen.

Dead Space 3 controls much like Dead Space 2. Isaac contains all of his old moves with the added ability to roll in any direction to evade attack, and to take cover or duck during Unitologist firefights. The prospect of armed enemies did indeed send a unintended chill down my spine when I first heard of this. Thankfully, firefights in Dead Space 3 are spaced far apart and one can spend hours in between a small quarrel with human enemies. The downside from these fights being that Dead Space 3 is clearly not a shooting game. The cover and duck system used for these fights feel poorly implemented and clumsy. Thankfully, a few bullets to the head or chest dispatches human enemies quickly. It’s certainly odd having firefights in a game like Dead Space, but it actually fits and doesn’t pull you out of the horror much at all. It’s fairly limited until the later chapters in the game, but with Necromorphs also joining fights, things remain frantic and familiar.

In an almost puzzling way, Dead Space 3 adopts even more survival elements than the series has ever seen. Instead of simply acquiring power nodes to upgrade weapons or Isaac’s suit, players must scavenge raw, mechanical resources in order to create parts for their suit, weapons, or items. These resources are scattered about environments and can either be found the traditional way, in boxes or dropped by enemies, or by sending out a scavenger bot. 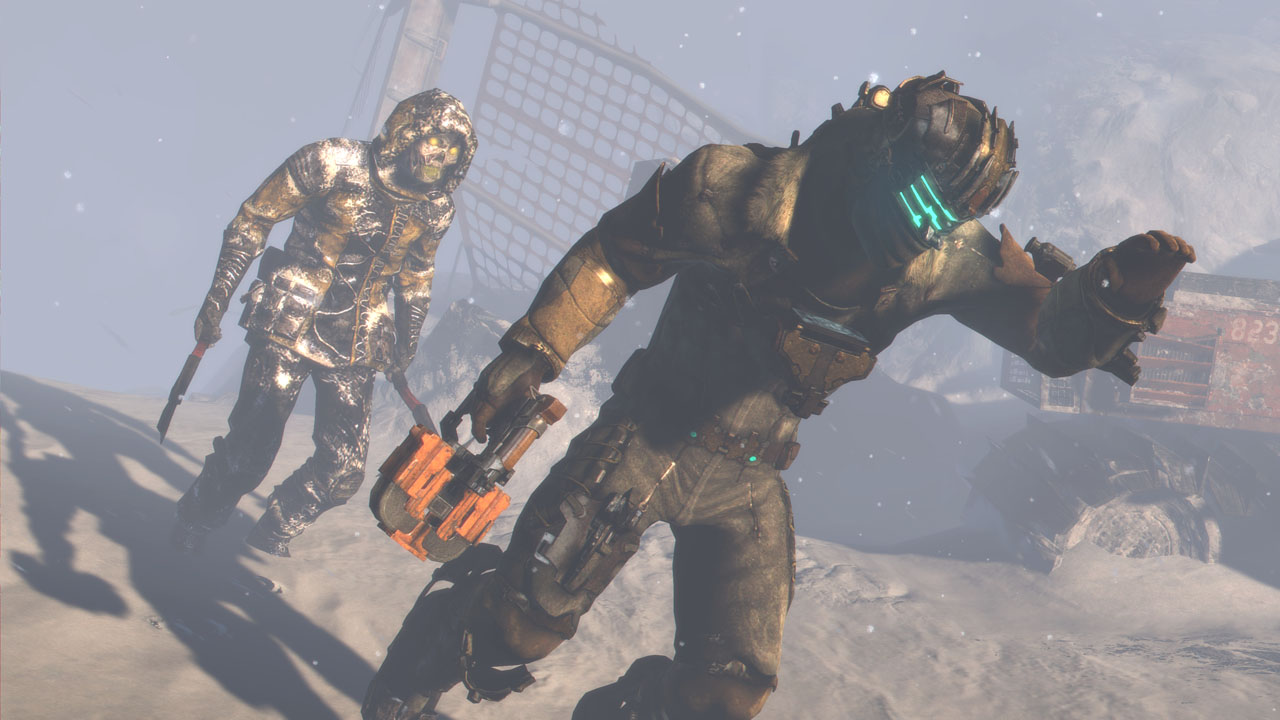 Weapon customization is a massive, new addition to Dead Space. Using found resources, Isaac can create, customize, and upgrade various aspects of his weapons. A simple plasma cutter can be upgraded to shoot or reload faster, or contain a shotgun alt fire. This really emphasizes the survival aspect of the genre. I found myself managing where I wanted to allocate resources: defensive measures, or raw firepower. There’s a lot of customization to be had with the weapon system, and it makes a lot of sense for the series and Isaac as a character. For the first time, Isaac actually feels like an engineer.

Another addition that amps up the survival elements that we should come to expect from a survival horror game, are puzzles. While past Dead Space games had a few kiosks that had to be fangled with to open or activate something, Dead Space 3 throws in a few more puzzle variants. The puzzles aren’t brain teasers, but they add some required thought and downtime to the game that was a bit unexpected due to my expectations of decreased survival horror elements. Co-op play actively alters puzzles so that the coordination of both players is needed. It’s small alteration, but one that enhances co-op into something more than a friend to shoot monsters with.

What’s a horror game without the horror, right? And while I am known to be the guy on Rely on Horror who’s dead inside and can’t become afraid of games anymore, and am often cynical when it comes to jump scares, Dead Space 3 gets a lot of them right. Typically, jump scares in the Dead Space series consist of vents exploding open to reveal a Necromorph. This time, Visceral must have been paying attention because they found ways to continue the vent scares, but add variation to the jumps. There’s an emphasis on frantic fear in Dead Space 3. Simply by using an abundance of enemies at the right time, or by putting players in scenarios where death is almost a guarantee, Visceral channels adrenaline fueled desperation and fear. Tau Volantis, the frozen planet that about half the game takes place on, shakes up the types of enemy encounters that players will come across—further aiding successful jump scares. 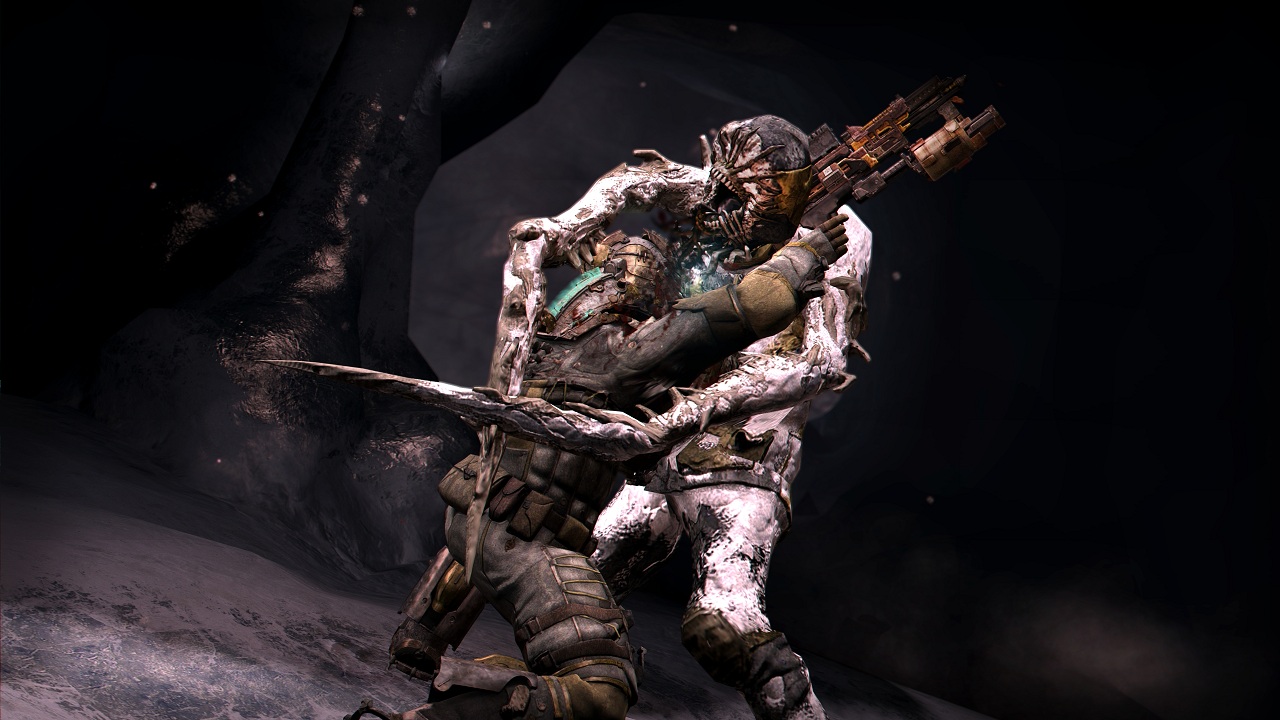 Ultimately, Dead Space 3 is damn good game, but a game with a few faults. It’s much like its predecessors in that it honors its roots, but there were moments where it felt too plain—it didn’t feel evolved enough. Of course, that may be what people want: an unchanged Dead Space experience. I on the other hand, gravitated toward co-op to remedy my desire for something new. The story, while ambitious and the most significant of the series fell short at engaging me, because there’s a massive, obvious fault with it, that any fan of the series will pick up relatively early. The character, while wonderfully acted, needed a stronger narrative to compliment them.

Issues aside, Dead Space 3 is still a masterfully crafted combination between action and survival horror. With beautiful art design and environments, wonderful use of sound, increased survival elements, the best audio and text notes in the series, and tight gameplay, Dead Space 3 may be a level below its predecessor, but it’s still a game worth playing. While co-op became my personal way to enjoy this game, solo play still runs strong. And in typical Visceral Games fashion, Dead Space 3 is loaded with New Game + bonuses on top of an already lengthy campaign (I finished at 14 hours). This may not be the best Dead Space game in the series, but it will still occupy a hell of a lot of my time.