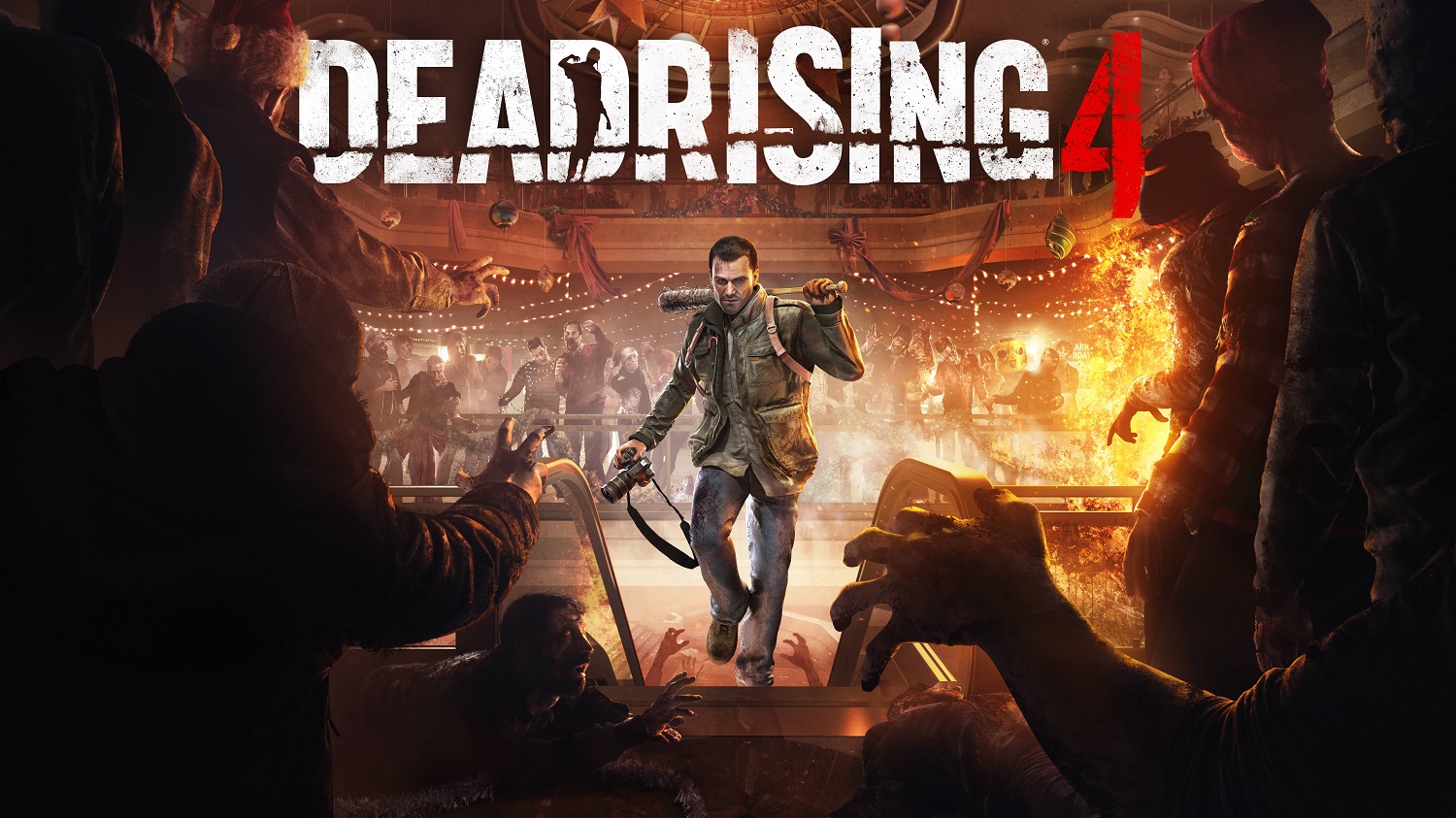 We’re nearing the end of 2016, and after playing dozens of games, I have found the one that’s been the most conflictive: Dead Rising 4. Flying under the radar since its announcement, the fourth mainline Dead Rising game is a very strange beast that in its pursuit to modernize the series, almost contemptuously rids it of some of its mainstays. But it’s also the most polished and ambitious Dead Rising game yet, so playing through it for review it has been an interesting experience. To say that Dead Rising 4 will be divisive among fans is an understatement.

Frank West is back, and he looks better than ever. But that’s not necessarily a good thing. Since the character’s reveal as the protagonist of Dead Rising 4, fans have aired their complaints about the significant changes made to his appearance and personality. On the outside, Frank has become yet another conventionally attractive male protagonist. Gone is his unsightly hairstyle, pudgy nose, characteristic limp, and slightly overweight frame. He’s proper handsome now. I’m someone who appreciated his original — frumpy — design which promoted uniqueness out of mundanity. On paper, though, Frank’s personality sounds unchanged — misanthropic, selfish, and rude. But with the removal of TJ Rotolo as his voice actor, Dead Rising 4 very much features a different Frank West, one with high energy and a penchant for speedy comedic quips. He’d be best described as Ash Williams with the voice of a far chippier Michael Madsen.

All of that said about Dead Rising 4’s Frank West; the character isn’t bad at all. He’s cheesy at worst and amusing at best. Ty Olsson brings a lot of charisma to the role, and while there have been some big changes to the man-who-has-covered-wars-you-know, Dead Rising 4 doesn’t suffer for it. This rings true to the rest of the game as well. 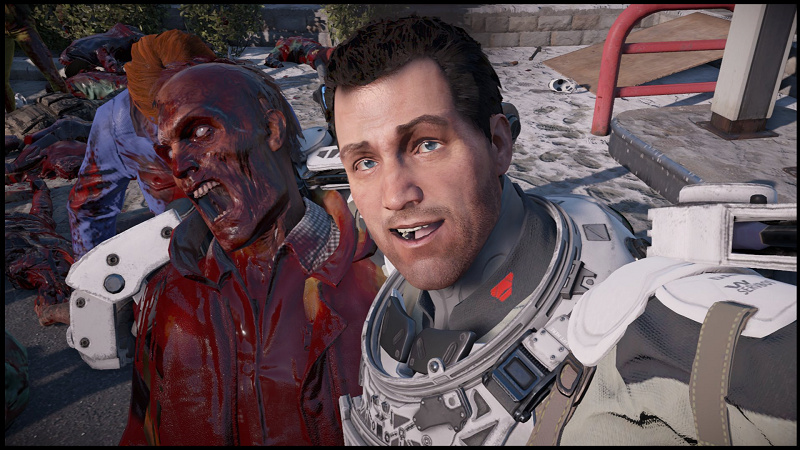 After his fame as the “Hero of Willamette” died down, Frank became a journalism professor. His pupil Vick Chu leads him to a potential scoop, which results in a whole new zombie outbreak. That’s the premise, and it leads to a serviceable story. It’s worth noting that the writing, which falls squarely into dark comedy territory — as opposed to the previous games which were played straight yet feature ridiculous scenarios — is surprisingly funny at times. Character dialogue has received extra attention, making the game feel a bit more narrative-focused than previous entries.

That said, the ending of the game falls painfully short. It’s anti-climactic and feels ripe for continuation through DLC. Dead Rising 4 lacks an Overtime Mode after all — a true ending rewarded to players that complete all relevant objectives. Based on the description of the upcoming Frank Rising season pass content, this appears to have been reserved for paid post-release content. Ouch.

Dead Rising 4 also sees the return of Willamette, Colorado, the place where zombie outbreaks began. Set 16 years after the first game, the town has rebuilt the Willamette mall, creating a massive structure that almost looks more like a theme park. I wouldn’t be surprised if the game started development with a theme park setting and was later converted to a mall with how thematic its districts are. Players explore the surrounding town as well. In fact, the majority of the game’s story takes place outside of the mall and in the town of Willamette. Go figure. 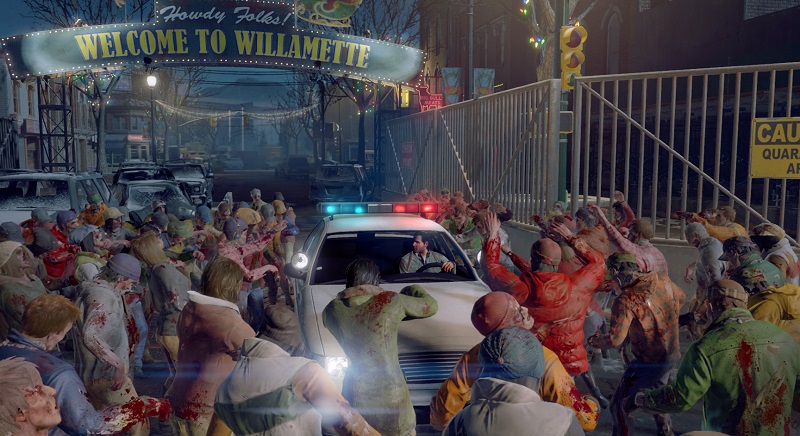 Despite its open world setting, Dead Rising 4 feels like the most linear game in the series. Story missions drive players to the latest and greatest moments while side missions, survivors, and Psychopath bosses are incredibly understated Side missions typically involve investigating an area on a map where a cluster of enemies reside; these include crazed survivors, zombies, or mercenaries.

Psychopaths, an unfortunately named but iconic aspect of the Dead Rising series, used to mean elaborate introductions and challenging fights against special human enemies. In Dead Rising 4, Psychopaths have been downgraded to slightly stronger enemies within groups, or as they’re referred to now, Maniacs. These characters take minutes to dispatch and have none of the charm and memorability of the Psychopaths in previous Dead Rising games. Simple cutscene introductions are nonexistent. Let’s call this “Baffling Dead Rising-ism Omission #1”.

While exploring Willamette, the occasional survivor will pop up on the radar, typically standing on or inside of a small structure asking for help. These NPCs are surrounded by zombies and need clearance before they can give you a reward and run off to safety alone. There is no variety here. These are Dead Rising 4’s survivors, and in my experience with the game, all play out the same. I refrain from calling this another baffling omission as survivors in the Dead Rising series have been a topic of contention, as escort missions are enjoyed by few and rarely done well.

Story missions themselves standout in Dead Rising 4 as its best moments. Compared to previous games, they have significant set pieces and varied layouts. Coupled with the series’ most polished combat to date, the missions paint a clear picture that Capcom Vancouver wants to make a bigger and bolder adventure game. Sadly this ambition results in some questionable changes and omissions to Dead Rising 4’s mechanics. 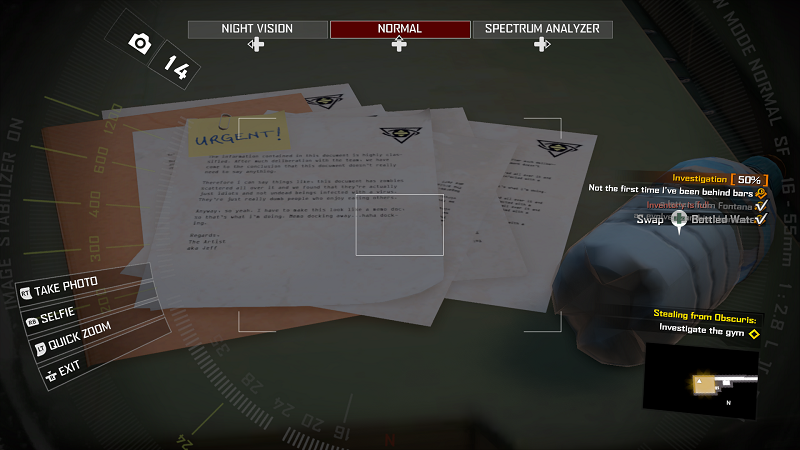 This time around the inventory system has been broken into four categories: throwables, melee, projectile (guns), and health. Each category but health open up sub-menus where items can be combined or removed. Health items, defined as edibles and medkits, grant the same amount of healing regardless of type by the way. Designating each weapon found in the game world to categories actively undermines the spirit of the series, and leads me to Baffling Dead Rising-ism Omission #2 — melee items cannot be thrown at all. Seriously. The Dead Rising series was founded on the idea that “anything is a weapon”. The latest entry in the series completely limits how to use these items as weapons.

While running away from a horde of zombies, one of the best feelings I’d get out of Dead Rising is desperation. Everyday items became weapons out of necessity. If I got cornered, I’d pick up a chair and throw it at a group before switching to a traditional weapon. In Dead Rising 4, not only can I not throw a chair or whatever else I find that’s designated a melee item, but if I wanted to rid myself of it I’d either have to open the menu and press X to drop it, or hold down on the D-pad. Both of these actions stall Frank for about a second, leaving him needlessly open for attack. Actively removing this fundamental aspect of Dead Rising while retaining so much else from combat feels like Capcom Vancouver were far too aggressive in their attempts to streamline the mechanics. I couldn’t believe they actually removed this function and spent time reading over message boards and the in-game manual to confirm. 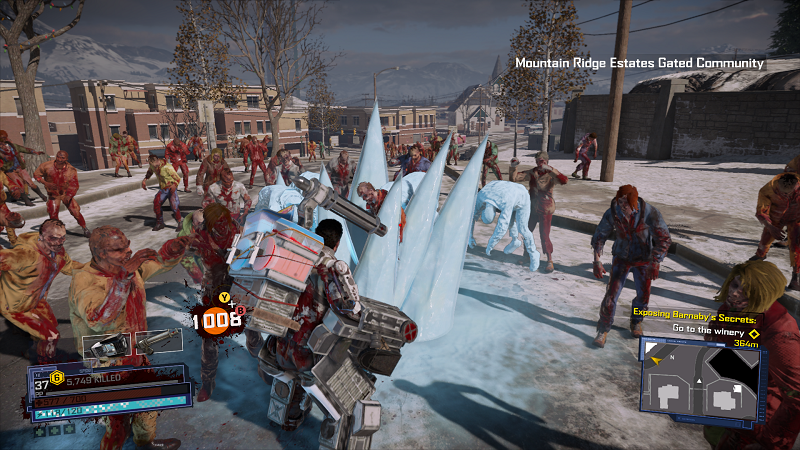 This iconic series feature is missing, but the game features a new stealth mechanic to be used against human enemies? Stealth alone would be an OK addition, albeit still strange, but past the very first mission it’s hardly applicable, let alone reliable. Skill points are better used elsewhere.

With the usefulness of environmental items diminished, players are instead encouraged to make use of Dead Rising 4’s many “wacky” weapons. Very early into the game, Frank West has immediate access to over-the-top weapons and vehicles via survivors located at safe houses. Each safehouse harbors NPCs like this, who sell weapons, vehicles, clothing and more for scrap — a new in-game currency acquired from regular experience-building tasks. As a result, there’s no sense of earning the best goodies through effort; an assorted of overpowered gadgets, including Iron Man-esque power armor, are easily accessible from the start.

The rate in which players level up has seen an increase as well, continuing the theme of excess. Dead Rising 4 is an easy game. Throughout my 20 hours of play, I died only a handful of times.

And what’s Frank West without his camera? Dead Rising 4 once again puts the spotlight on photography, arming Frank with a hefty camera to help uncover the new conspiracy with. Once again the camera can be used to gain Prestige Points by taking thematic photos. When he’s not taking selfies or problematic photos of survivors in precarious situations, Frank uses its many functions to help investigate. During select story missions, Frank’s camera is the key to finding clues. This is a novel addition, but you’ll never feel pressed to use the camera for experience building as the game rewards you left and right.

Unlike many of the reviews I’ve seen, mine is based on the Windows 10 PC version of Dead Rising 4. At the time of writing, my experience with the port wasn’t a terrible one, but there were very clear technical issues. For starters, the game suffers from frequent stuttering. Occasionally I’d also come across some animation / physics glitches which would propel either Frank, his vehicle, or a recently dispatched zombie several feet. The FPS never felt very stable. Those with specs lower than mine (see specs below) probably won’t have similarly passable performance. I’d advise waiting on additional patches or see if the Steam release features any additional optimizations.

On to Baffling Dead Rising-ism Omission #3: campaign co-op. Dead Rising 4 favors challenge-based multiplayer a la Dead Rising 2‘s Terror is Reality. Four survivors can get together online to take part in challenges set all around Willamette, but don’t expect open world exploration or completing the main campaign together. I’m assuming this was done to focus resources on making the campaign the best it could be, but the omission feels like a step backwards. 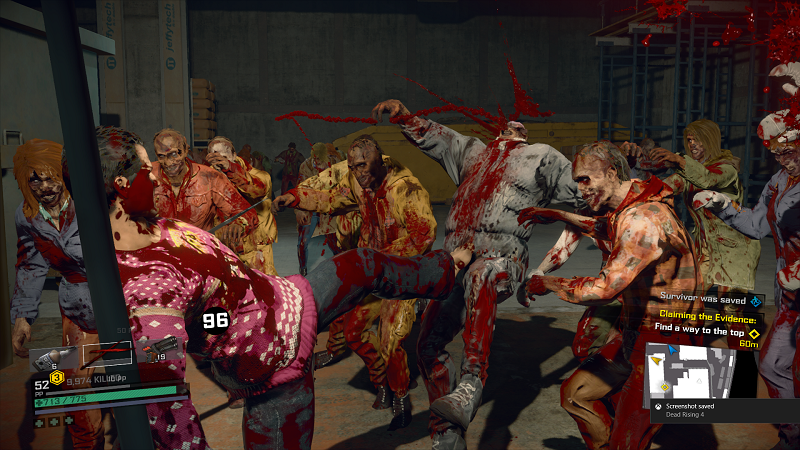 In the series’ continued retreat from its survival horror origins, Dead Rising 4 is pure power fantasy. If that’s your sort of thing, then you’re in luck as the game is a very enjoyable one. On its own, it’s a well-made game that serves players one thing: mindless fun. But if you’re a diehard series fan, the latest Dead Rising may not be for you. Capcom Vancouver have shown that they’re committed to changing the direction of the series. From a fan’s perspective, their approach with Dead Rising 4 appears almost haphazardly assertive. They’ve eliminated multiple mainstays that are still compatible with their new direction. It’s just plain odd. But if your sandbox game tastes vary and you can set aside your feelings about the state of the series, you’ll definitely have some fun.