It’s dark, perhaps a little bit too dark.  Your flashlight barely makes out the outlines of a few abandoned cars up ahead.  There’s no one else around, but deep inside, you know you’re not truly by yourself.  You trudge through a knee-high pile of decrepit corpses and used up the last of your SMG ammo to make sure they ‘stayed’ down.  It’s all clear for now.  But perhaps not?  You think you might have heard something behind you – perhaps in the burned out building or the shipping container?  You turn your head just in time to see the horde burst forth and come at you.  They move fast, they claw at you with both hands and bare their disgusting, rotting teeth.  Instantly you’re surrounded, trying to push through.   There’s a clear area up ahead, you can stand your ground and hold them off at a choke point!  You charge through the massive swarm, trying to knock them out of the way, but there’s too many of them!  The low hum of the nearby of the Weapons distribution machine is drowned out by the growls and screams and what little light there is fades to red.  But you have to get through!  You’re not going to turn into one of them!  At least not today…

Welcome to the experience of Dead Nation.

We’ll start off by stating that during our play through of the PSN exclusive, there were times where we seriously questioned our gaming skills…on ‘Normal’ difficulty.  We pulled through with our egos in tact however, because we’re obviously not alone in this feeling, as we frequently checked the online leaderboards – to find out that in our respective country, at the time of writing (Canada for this reviewer) that we were the only ones foolish enough to play anything other than Easy. 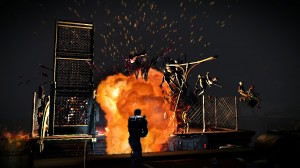 That being said, Dead Nation is an incredibly enjoyable experience.  Brought to you by Housemarque, the creators behind Super Startdust HD, Dead Nation is a top(ish) down shooter, set in the midst of the zombie apocalypse.  Take up arms and join your country’s effort to clean the streets of the undead – because these zombies aren’t just going to shoot themselves, now are they?  Dead Nation will be available exclusively through the Playstation Network starting November 30 at a nice price point of $14.99.

The game puts you in the role of a lone survivor seeking salvation.  There are actually two separate survivors (male and female) who pretty much go through the same storyline – right down to the speech. We do wish there was a separate storyline for each character, but…sigh.

Throughout each stage there are several ‘safe rooms’ which are small areas between zones where you’re relatively safe.  Here you can stock up on ammo, purchase weapons and upgrades and reconfigure your armor, not to mention just take a breather for a few minutes.   You can purchase the items with the cash you’ve accumulated in opening up chests and car trunks and just shooting zombies in general.  Armor however is a different story – you can only find it in chests.  It does take some exploring to find all of the pieces, which adds some longevity to the game.    In addition to your standard guns ‘n ammo, you can also pick up grenades, mines and other thrown weapons.

The little scenario at the beginning of the review really is how Dead Nation plays.  It’s not uncommon for you to be completely swamped with zombies, and a few special mutated thrown in for good measure.   There are different types of zombies and some of them seem to soak up bullets while others fall relatively easily. 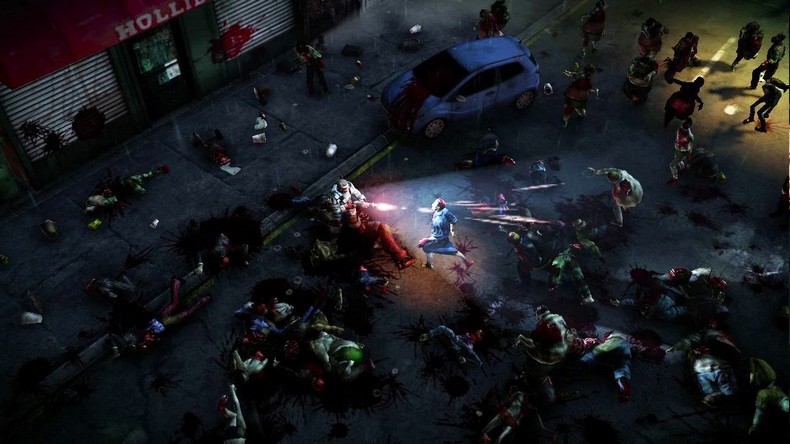 The top-down zombie shooter has been done before, but not quite like Dead Nation.  There’s the rather light-hearted “Burn, Zombie Burn!” and “Age of Zombies” but Dead Nation is very…gritty.  The game gives you just enough light to see what your character is facing, sometimes not enough light at all.  Often times we found ourselves bested by zombies we couldn’t even see.  It always keeps you on your toes, spinning around and firing at anything that we even think is moving.  Bodies and gut litter the streets, accompanied by pools of blood, abandoned vehicles, barricades, garbage…we’d like to think it’s what things would really look like, should such an apocalypse occur.  Just saying…

Dead Nation also has an extremely heavy online focus as well.  Not only can you go at each level solo, but you can invite a friend and go at it together.  Don’t have anyone willing to sit next to you for a few hours?  No worries, Dead Nation has online multiplayer as well.  You do have to start from the beginning to begin a co-op session however.  Just interested in going solo?  That’s fine too (loner).  After each stage, you’re brought to the online ranking page.  Here you can check out your rank in your relative country, your rank in the world, and how your country stacks up in the grand scheme of things.  There’s a little ticker at the bottom of the page that offers hints to gamers as well, often times promoting the top player in your country and in the world.   We loved the way Housemarque has implemented the ‘global pandemic’ feel.

While we overall enjoyed the game, there were a few things that kept it from being perfect.  While we could live without the drop-in/drop-out co-op, the most disappointing feature of the game isn’t what was in it, but what was left out!  Many of the promotional trailers and videos, and especially images show several parts of the game where the POV of the camera has changed.  However in the game, the camera mostly keeps its same position, high above the character.  We’re disappointed because this would have been an outstanding game if they kept that feature in – it would have really put us in the middle of the action instead of keeping us high above all of the grisly murderings going on. 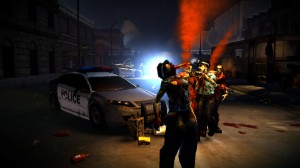 Perhaps we’ll give it another go on Brain-dead mode anyway and finish off some of those trophies we missed?  Or just to give our egos a good boost?

Dead Nation had us addicted from start to finish.  A grim tale of a lone survivor’s quest for salvation, it’s a nice escape from the increasingly growing ‘cutesy’ zombie genre.  With local and online multiplayer available, plus real-time stats screens and Trophies, Dead Nation is definitely something worth downloading.  While we were disappointed that the game didn’t deliver on some things in the trailers and promotional shots, the game does a good job at making up for any shortcomings it might have.  A must play for anyone looking for a grisly good time.  And at $14.99USD, you’ll definitely get more play out of this than other downloadable horror titles of late–wink wink, nudge nudge.