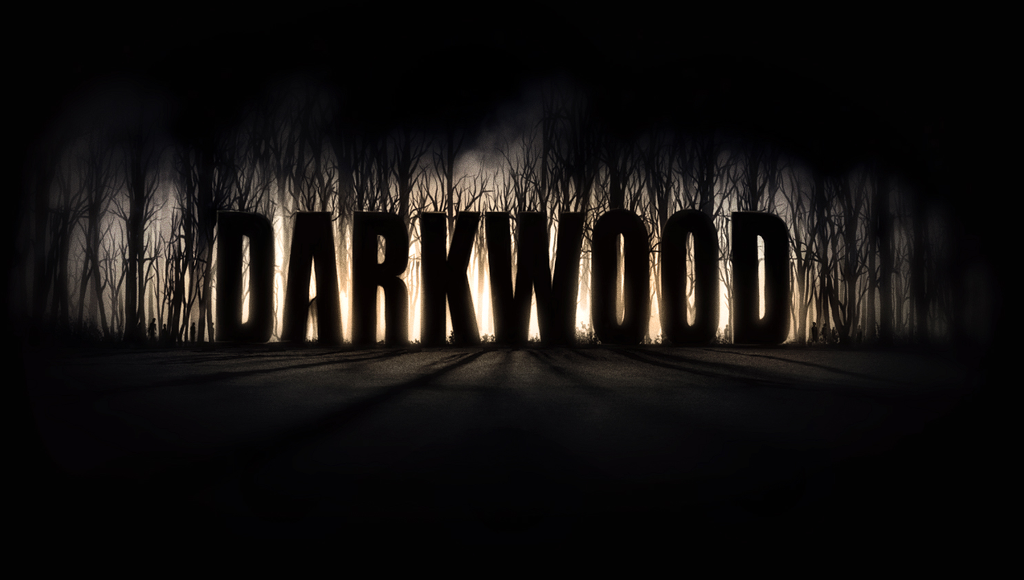 “You are playing a challenging and unforgiving game.”
“You will not be led by the hand.”
“Respect the woods. Be patient. Focus.”

So opens Darkwood, a top-down, atmospheric survival-horror game from Warsaw’s Acid Wizard Studio. The emphasis is on the survival part of survival-horror here, but the experience is laced with a rich story and characters that kept me hooked. It’s a slow burner, and if you let it, it will burn right to your core and settle there. It did for me, leaving me with a gnawing curiosity that constantly led me to delve a little too deep and suffer the awful consequences — as horror should be.

Darkwood sees you thrust into a strange overgrown forest, full of equal parts wonder and danger. We join our protagonist after the wood has expanded and consumed several towns and villages, the ruins of which reside in what few clearings remain. You’re trying to escape, but the creatures of the wood, the other survivors, and the titular wood itself might not make things so easy.

Your primary concern will be the fortification of your dilapidated hideout against the things that come at night. Darkwood’s world is fairly open, allowing you to explore wherever gnarled walls of trees don’t stop you, but each evening you must return to your hideout, bathed in the vapors of the “protective substance”, or you will not survive beyond nightfall. For most threats, barricades will suffice. Windows and doors can be boarded, furniture can be dragged around to plug holes, and traps can be built and placed where needed. For the less corporeal threats, only strong light and hope will keep them at bay, so you’ll need to keep an eye out for fuel for your generator. You’ll also need to keep your weapons in good shape to defend yourself. Manage your resources and trade for critical items. Stockpile your inventory with tools for exploration and have space to bring things back. Food can be handy too, but you don’t really need it. You don’t eat. At least not normal food and… well, more on that later. 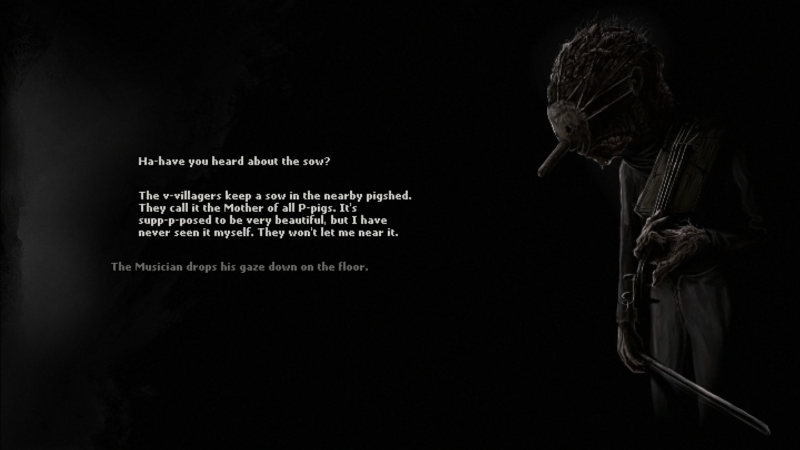 Darkwood is beautiful. The art direction at Acid Wizard is top notch, and the incredibly detailed images for terrain and NPCs do an amazing job of revealing just enough about how weird this world is, without revealing too much. A stylistic low res decision allows for art to be of consistently high quality, and adds a nostalgic dreamlike haze to scenes. Line of sight is rendered with bright crisp colour where you can see, and murky, twisting shapes where you cannot — a memory of the place that cannot always be trusted. Some of Darkwood’s best and most tense moments take full use of this vision system, along with excellent sound design that lets you know when something is trying to break down the door…It’s also dripping with atmosphere.

This is a weird game. Body horror is omnipresent, and the wood, while vast, is an oppressive presence at once appalling and appealing. It is beautiful but deadly. The trees grow back faster than they can be cut down. An organ pulses between the roots of the underground tunnels. Survivors are compelled to go to the deep woods and are never seen again. You are compelled to consume the odd mushrooms and strange meats by cooking them and injecting yourself with the aforementioned protective essence. It grants you strange powers, like the ability to shed a part of your body to use as a landmark. These powers come at a price however, and are occasionally accompanied by some of the creepiest, most compelling dream sequences I’ve had the pleasure of playing through. You might as well enjoy them while you can. There’s no time for sleep normally; night is when they come for you.

Surviving at night in Darkwood has given me some of the most tense and engaging experiences I’ve ever had in a video game. You can spend a lot of time on your defences, but there will always be some weakness or gap to exploit. From a mud-covered madman physically barging through a weak barricade, or something with far too many legs tunneling up through the floor, the bizarre creatures will find a way in and find new ways to surprise you. My first encounter with a banshee still sticks with me: its mind-warping presence and piercing shriek are hard to forget, as are its numberless gnashing spawn. Even if you think you’ve got the beasts and savages at bay, there are the supernatural threats to deal with. Sometimes you might be your own enemy. A twinkling light glimpsed through the cracks in the wall. An insistent, but human, knocking at the door. Is it worth abandoning your safe room to investigate? Can you afford to ignore it? Each night is different, fresh horrors assaulting you night after night, and the breathless relief as the sun finally comes up is exhilarating. 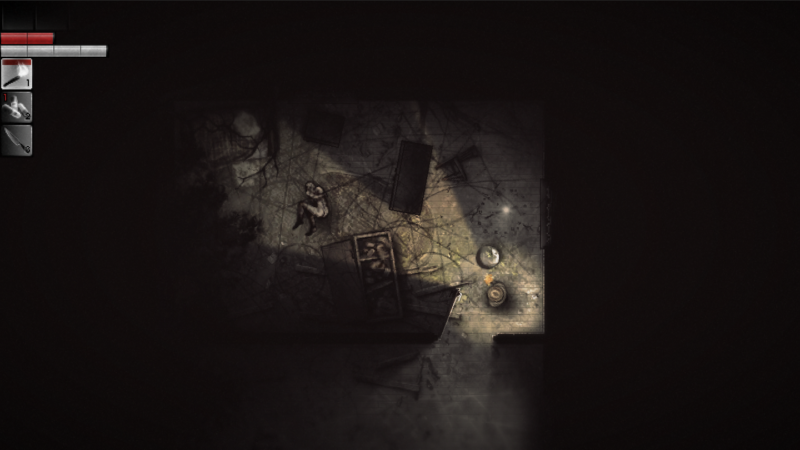 Not everything is out to kill you. There’s a host of characters inhabiting the wood with you, like the survivalist Wolfman who scoffs at your chances of survival in “his wood,” yet he still offers to help you for a price. There’s the musician, a boy who is ostracized due to his “condition” but attempts to serenade a pretty lady with music from his homemade violin. Well, he calls it music anyway. Then there’s the Mushroom Granny, with her extensive knowledge and delicious, juicy flesh. The Trader, a mute enigma, fused to his helmet and clothing through mushroom-like growths, communicates by writing on his arm. He pleads for you all to stick together. You’re alike, after all.

I was pleasantly surprised by just how intertwined the story threads were. Darkwood has a decidedly old-school approach to objectives. You have a journal, but otherwise there are no quests or intrusive markers, you have to work things out on your own. There are many important decisions to make, and you might not be aware you are making them when you do. My decision to slaughter a squealing monstrosity led to a whole village starving. A later event atoned for that decision. Another moment of selfishness led to more death and suffering. An act of kindness elsewhere killed others. Your actions genuinely have consequences and have more weight than in most games. There’s no prompt, you have to be the one to take action. At one point, I had someone’s life in my hands. I took a chance on them that paid off. I witnessed their slow descent into madness, and it was terrifying. It was also fascinating. Throughout it all, perhaps the most unsettling thing is not quite knowing what exactly the protagonist had become, only getting hints from the reactions of others, or glimpses in broken mirrors. 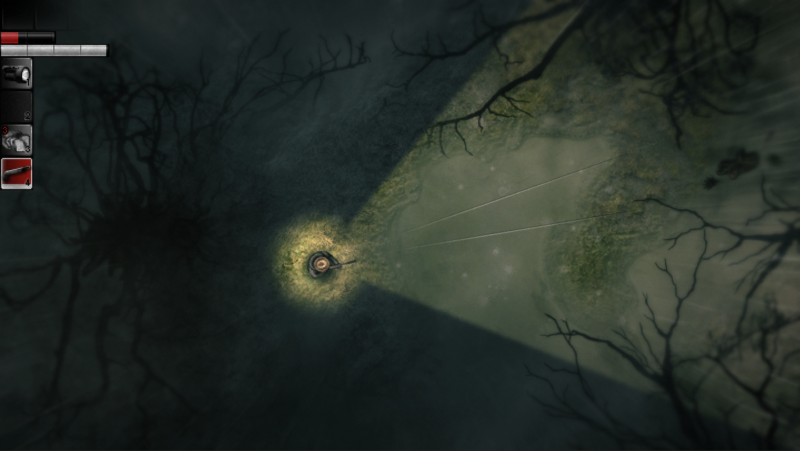 Exploration, too, is a joy. Most of the time, things are fairly slow paced, the top-down view revealing new mysteries and dangers slowly. You can sprint, should you need to, but the danger of running into poisonous mushrooms or the jaws of a monster is pretty significant, and therefore sprinting is best saved for familiar territory. The map is an approximation, with landmarks scribbled in as you find them. Aside from an ability you can get early on, you can only approximate your location and have to navigate on instinct. Getting lost as the sun is setting is an unfortunate situation indeed. When you do find a landmark or structure, you can investigate your way there (but where is there?).

There’s a vast array of seemingly mundane tools and items that can be used in ingenious ways. Do you pick the lock or smash it open? Do you carefully avoid the writhing, infected corpses, or do you pour gasoline on them then toss a match? Do you illuminate the dingy rooms by expensive flashlight, flickering torchlight, or use a flare to keep your hands free? Do you engage with firearms, hoping you have enough ammo? Do you use your shovel, hoping it won’t break? Or do you distract them with thrown meat, hoping they’ll go for a meal that doesn’t fight back? Come back tomorrow, or push on, risking being caught out at night? Most places of importance and special events are accompanied by a fantastic, haunting soundtrack that solidifies the tone and really helps you stay immersed. Even small shacks can seem intimidating and demand to be approached with caution.

It doesn’t always work flawlessly. The narrative exploration seems sometimes at odds with the survival aspect, and you do get heavily punished for exploring unprepared. Days are quite short, so exploring areas a long distance from your hideout can mean you either have to rush it or spend several days running back and forth, which seems at odds with the tone of the game. Many times I wished the days were longer, or that time was paused while inside smaller structures. Larger areas with crucial story elements do pause the day/night cycle while you are in them, so the lack of consistency can be a bit jarring. 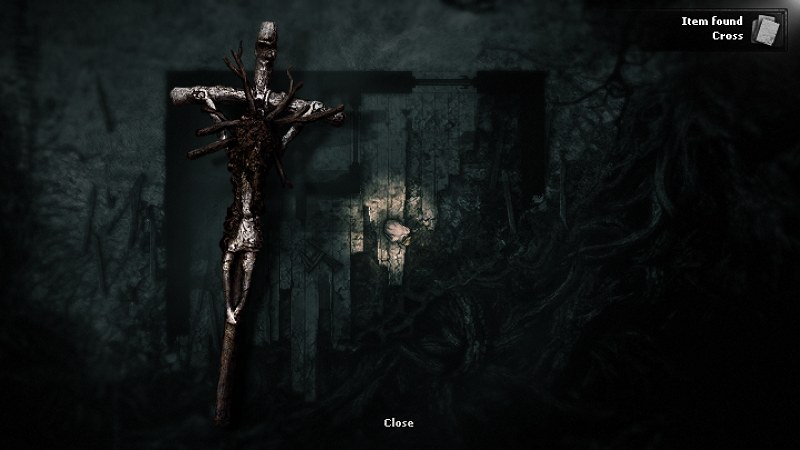 Combat can be satisfying, as all the weapons hit hard and have fantastic feedback, but it feels clunky as hell. To attack in melee, you need to either wind up a slow, heavy assault or do a quicker desperate attack for less damage and a heavy stamina cost. Timing is crucial for both, and it was only towards the end of the game that I felt I could reliably hit something coming at me. You can dodge too, but only directly backwards, which is often not enough to get out of the way of a beastie lunging at you. Fighting one enemy can be a harrowing experience, and multiple foes are a good way to get stun-locked to death. Luckily, there’s a huge array of tools you can use to even the odds, Molotov cocktails being a favorite of mine. Plus, you can always try to run away.

I played through to the “Bliss” ending, which will mean something to people who have finished the game already. While I wouldn’t call this ending satisfying, it has amplified my curiosity and essentially demands another playthrough. So many questions are left unanswered, and so many trails are left unfollowed. I never made it to the wedding. I never explored the church from my dreams. I never went below the radio tower. I never opened the box. The game does not lead you by the hand, and secrets are real secrets. Clues are present, but you need to figure things out yourself. When you do, it’ll feel like a real achievement and perhaps will hint at the overall big picture. 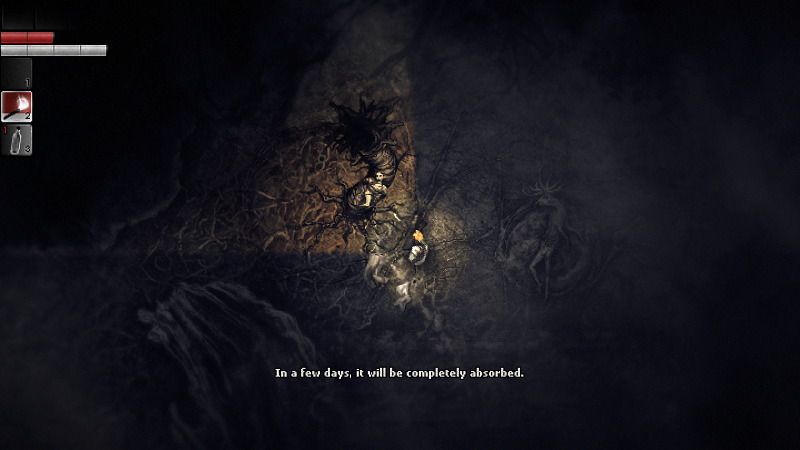 All told, Darkwood is an immersive, atmospheric, and haunting experience I can thoroughly recommend. It’s a little rough in a couple of places, and is both challenging and unforgiving, but will reward those who master its secrets with a rich, compelling nightmare of the highest caliber.