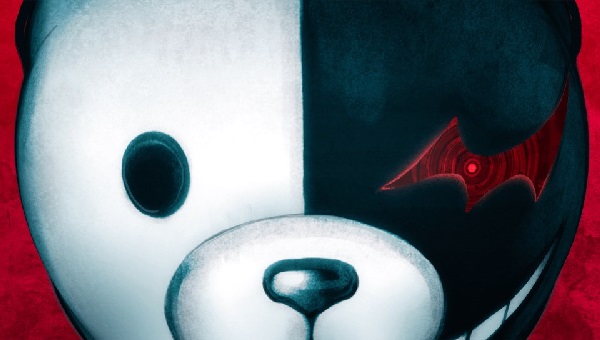 Creating an engaging murder mystery in this day and age is quite a feat. Generally, murder mysteries go down one of two narrative paths. The first being the mystery of the killer’s identity is rather obvious and can be predicted well in advance of the story’s conclusion. The other being that the assailant is a character that had not been introduced until after the mystery itself was solved. Both usually result in a disappointing story, especially the latter path, which is a total cheat for the audience. So when Danganronpa: Trigger Happy Havoc fell into my lap for review, I was pretty certain it was going to fall in line with either one of the aforementioned murder mystery narrative structures, because so many other pieces of media tend to fall into them. However, much to my delight, I was instead greeted with something that far exceeded my expectations in all regards.

Before I go any further into the review, I’ll make it clear that this review will be spoiler free. I’ll give a general outline of the plot and mention some of the characters, as it’s essential to explain how certain game mechanics work, but I’ll remain as vague as possible on critical plot points.

When the game begins, we’re introduced to the game’s protagonist Makoto Naegi. There’s nothing that special about him at all– in fact, Makoto stresses that to the player. Reason being, he’s just been accepted to the prestigious Hope’s Peak Academy, a school for the country’s most elite students. No one applies to get into Hope’s Peak; all students are invited based on the fact that they’re the elite of their field. For example, there’s the Ultimate Martial Artist, the Ultimate Fashionista, the Ultimate Biker Gang Leader, the Ultimate Fanfic Creator, and several other strange categories. As you can see, Hope’s Peak doesn’t exactly have the most traditional academic categories in mind when selecting prodigies. Regardless of how strange Makoto’s classmates’ fields may be, he still stands out amongst them because he doesn’t excel in anything–he’s just lucky to be there. No really, Makoto is the Ultimate Lucky Student, and was randomly selected to attend. 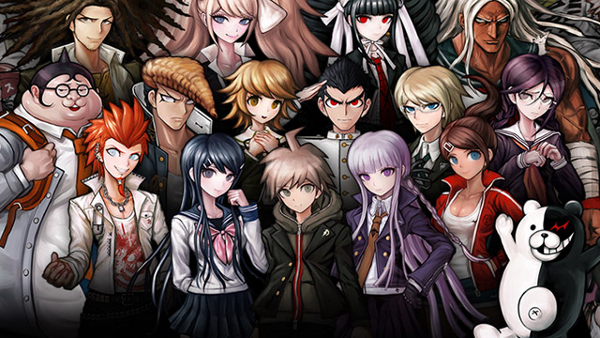 Upon Makoto’s arrival at Hope’s Peak Academy, you find out pretty quickly that his luck has run out. Once inside, Makoto and the rest of his classmates realize they’re trapped inside the Hope’s Peak Academy. Windows have been sealed up, all exits are behind giant bank vault like safes, and there’s no way of contacting the outside world. There’s no instructors, staff, or even any students aside from the 15 “Ultimates” that were invited there. Turns out that they were all deceived by the school’s headmaster, more specifically, a vicious little bear named Monokuma, who informs them that they’re trapped there for the rest of their lives. Well, there is one way to get out, and that is to graduate–seems simple enough, right? Unfortunately, under Monokuma’s terms, graduating from Hope’s Peak isn’t just a matter getting a passing GPA. Oh, no, you graduate from Hope’s Peak by murdering one of your fellow classmates, and getting away with it. That is to say, if the murderer doesn’t get caught, they’ll graduate and will be allowed to leave Hope’s Peak Academy. I won’t say any more than that, it would be a crime to spoil any more of the plot than the initial set up.

As goofy as the plot sounds, trust me when I say, it just works. The game is exceptionally well written, to the point where the writers were fully aware of expectations from people that leaned on the cynical side of things with regards to the murder-mystery genre. Any preconceived notions you’ll have with regards to the story will be subverted at every turn. There were multiple instances where I found myself so involved in what was going on in the story, that I’d actually laughed out loud at how the game was able coerce me into believing it was going in a predictable direction–only to pull the rug out from under me, as it were.

If I were to lobby any sort of criticism at the writing, it’d be that certain characters don’t quite do enough to subvert their respective tropes. It wasn’t a problem to me, per se, but in a game with writing as sharp as this one, it stands out as a bit lazy. 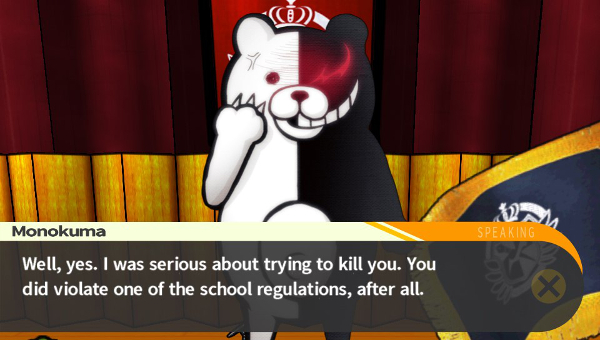 Danganronpa: Trigger Happy Havoc adopts a unique series of gameplay elements, but it is first and foremost a visual novel. The majority of your time will be spent speaking, questioning, and interacting with your fellow classmates. Though it should be noted, despite being a visual novel, Danganronpa: THH does not just become an exercise in hitting the “next” button on text bubbles. In fact, in terms of how you move about the various environments, Danganronpa is startlingly similar to classic first person shooters like Doom. That is, you’ll navigate a 3D space, with most characters and special objects being 2D sprites.

You’ll have a good amount of time to get familiar with the controls, as the downtime periods of the game become somewhat of a life sim. So there are plenty of opportunities to spend time with your fellow classmates and get to know them better. Not to mention, there’s a “Report Card” system in place that mark your progress with specific characters; the more you spend time with them, the closer you’ll become. If you’ve ever played the Persona RPG series, you’ll immediately recognize the similarities between the Report Card system and Persona‘s Social Link system. That is, the better you get to know a character, the better your stats will improve.

However, the downtime with your classmates isn’t going to take up the majority of your playtime. Remember, all students in this school are imprisoned here, they’re basically inmates in a shared jail cell. As I mentioned earlier, Monokuma makes it quite clear that the only way for someone to escape Hope’s Peak is to murder another student and get away with it.  You’re probably wondering how someone gets away with murder when all the possible suspects are trapped in a school. Well, it’s all determined by a deadly class trial. 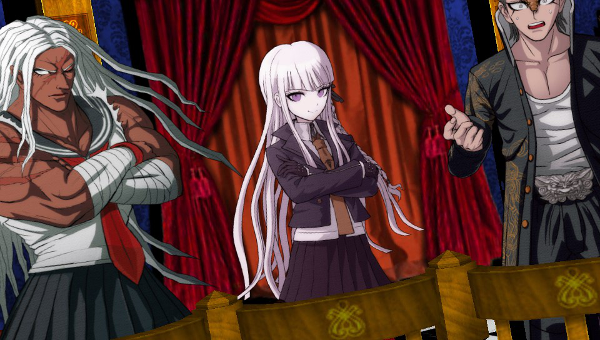 When you discover a body in the game, Monokuma will announce over the PA system that you’ll have a short period of time to examine the crime scene and search for clues. Once that’s been completed, everyone will have to take part in a class trial, where you’ll have to put forth your evidence in order to discover the identity of the murderer. These class trials are presented as a sort of round table, basically just a stage where everyone starts discussing everything surrounding the case. This is where most of the more intricate game systems will come into play. For example, there are “Make your argument” instances where everyone is throwing statements and questions out there, and it’s up to you to pick apart their arguments. You do that with what the game calls “Truth Bullets,” and they’re going to be your bread and butter in every case. Basically, text will appear on screen as a character is speaking, and there will be portions of their sentences that’ll appear in orange. The orange text is where you’re supposed to fire away your truth bullets at, as a means to counter any claims they’ve made. Sounds pretty easy, right? Well, initially it will be, as you’ll only have one truth bullet equipped at a time, but later on you’ll have numerous to choose from. Not only that, but your argument sections will only become more complex and difficult as you progress in the game. If you fire away a Truth Bullet at the orange piece of text, it’ll eventually result in a game over. There are several other mini-games you’ll play that are intertwined very cleverly into the class trials as well, one of my favorites being a musical rhythm game where you argue back and fourth with someone trying to deny the truth.

The class trials are absolutely thrilling, and solving the game of “whodunit?” is a roller-coaster ride of hope and despair. If you’re the kind of person that enjoys “eureka!” moments in games, you’ll probably need a cigarette after the class trials in Danganronpa: Trigger Happy Havoc. In nearly every trial, I was certain well ahead of time of just who was responsible for the crime, and in all but one instance, I was wrong each time. The game is well aware of clichés that surround murder-mystery fiction, and it will often trick you into one line of thinking that doesn’t match up with the evidence. 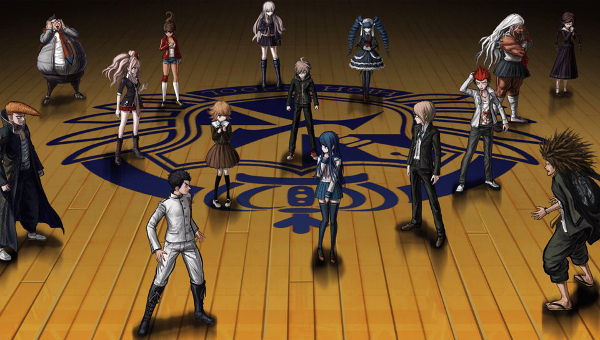 Presentation is without a doubt one of the things that Danganronpa: Trigger Happy Havoc excels at. The art direction and character designs fit so well with the over the top dark humor of the game, that there’s no clash between the art and the narrative whatsoever. The 2D character portraits in particular do a great job bringing the characters to life, despite the fact that the some of the characters in the game look absolutely ridiculous. Then, there’s the music; oh my, this game may just feature one of the best soundtracks I’ve ever heard in a videogame ever. The game’s composer Masafumi Takada, who’s well known for games like No More Heroes and Killer 7, did a straight up incredible job on Danganronpa: Trigger Happy Havoc. There were instances where I found myself not continuing a dialogue with a character just because I kept listening to the music looping in the background. For example, Monokuma’s theme is the sort of thing I’d like to play every time I enter a room in real life.

The game also gives you the option to choose between the original Japanese vocal track, and NIS America’s English dub. At first, I wasn’t a big fan of the dub, but over time it really started to come into its own. I played through the entire game in Japanese, and I prefer it that way overall. Honestly though, you really can’t go wrong with either.

On a final note, I just have to mention how funny this game is. I can count on one hand the amount of games I find funny, and even then, it’s usually not intentional (e.g. Oblivion). Rarely ever is a game genuinely humorous, but Danganronpa is outright hilarious at times. I’m not exaggerating; it’s laugh-out-loud funny at times. To contrast that notion though, I also have to mention how creepy this game can be too. There were several instances where the game becomes exceptionally dark; some of the murders and the learned fact behind a case can be exceptionally depressing. Rest assured, you’re going to experience a wide array of emotions while playing the game. 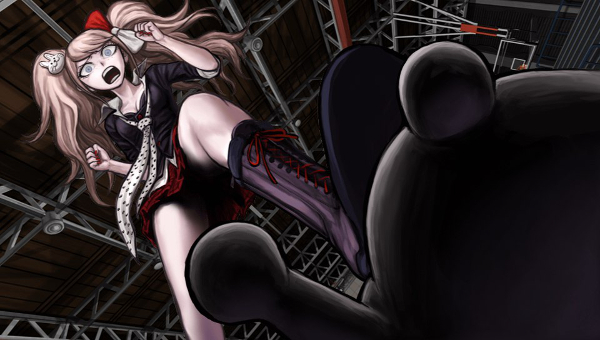 Danganronpa: Trigger Happy Havoc is a difficult game to review, but only because it’s hard not to gush about the story.  It’s been a long time since the plot of a game was as gripping to me as this one, and even longer since I’d witnessed one so funny. This is one of the best murder-mysteries I’ve had the pleasure of experiencing, not only in gaming, but across all mediums. With a campaign that clocks in around 20 hours, you’d be beary silly to pass up on this one.