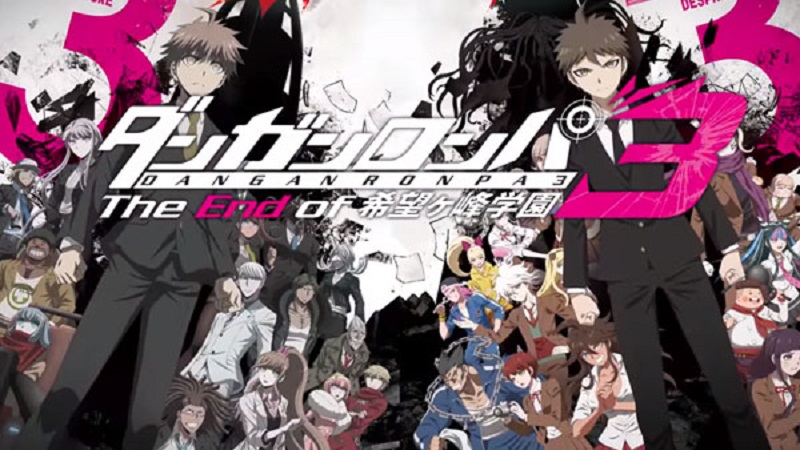 Hope is truly a strange thing.

A deficiency of hope can cause one to become cynical and pessimistic, while an excess of hope breeds disappointment and naïveté. It’s a grand balancing act that’s constantly being influenced by personal bias and expectations, and if the scale dips too far on either end it can wind up seriously distorting your perspective on certain things.

With this said, perhaps I came into Danganronpa 3: The End of Hope’s Peak High School with the wrong mindset. Touted as the conclusion of the trilogy started by Spike Chunsoft’s pair of top-notch murder-mystery visual novels, Danganronpa 3 was built upon unkeepable promises and more loose ends than a yarn factory, yet it soldiered boldly onward. Its two 12-episode arcs, Side: Future (which stars the first game’s surviving cast and focuses on a brand-new killing game among the heads of the benevolent Future Foundation) and Side: Despair (a prequel story aspiring to tell the tale of how the cast of the second game fell to despair), were cursed to heft the weight of an entire franchise on their shoulders and to their credit, they bear the weight more adequately than some may have expected. 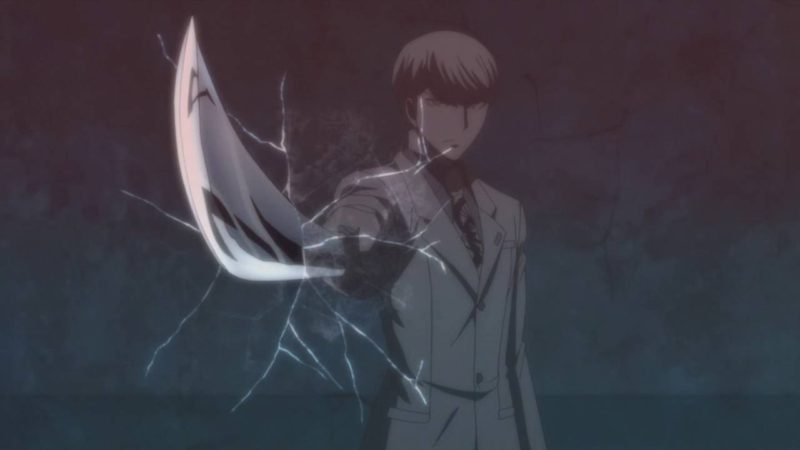 Let’s make one thing clear right off the bat: Danganronpa 3 is a disappointment. However, and I cannot stress this enough, that does not mean that it is bereft of value, worth or intrigue. Similar to the series’ two-toned antagonist Monokuma, Danganronpa 3 is a dichotomous beast; brilliant and groan-inducing in equal measure. This anime is going to be quite the contentious subject for many fans, as arguments on whether the good parts shine brightly enough to distract from the drek are going to rage eternal (or at least until the fanbase is placated by the release of the next mainline game).

That said, what Danganronpa 3 does right, it does incredibly so. Side: Future in particular is everything Danganronpa fans have come to love about the series: a thrilling death game revolving around a cast of quirky characters whose clashing personalities and ideals only serve to add to the drama and tension. The new killing game featured in Side: Future makes for a unique setup this time around; rather than a “traditional” murder-mystery resolved by logic and class trials, Side: Future has Monokuma eschew series convention by designating a single attacker who assails the participants while they sleep. In this sense, the drama plays out as somewhat of a high-stakes game of Werewolf or Mafia and suits the anime’s protracted 12-episode structure like a glove. Additionally, an enigmatic new mechanic is introduced known as “Forbidden Actions,” unique personalized restrictions that punish each participant for breaking their assigned rules (i.e. “no running in the halls,” “no turning right,” etc.). Forbidden Actions are an inherently intriguing addition to the proceedings; a beautiful little wrinkle that on their own generate another layer of mystery as well as establishing distrust between the characters.

The new cast of Future Foundation leaders is admittedly hit-or-miss, with standouts including the delightfully douchey Juzo Sakakura (the former Ultimate Boxer) and creepy-cute Ultimate Pharmacist Seiko Kimura, both of whom would feel right at home amidst the mainline games’ stable of memorable characters. Tragically, a lot of the cast doesn’t receive as much attention as these two do, which leads to probably the largest issue with Side: Future: you’re never given a reason to care about most of the participants. 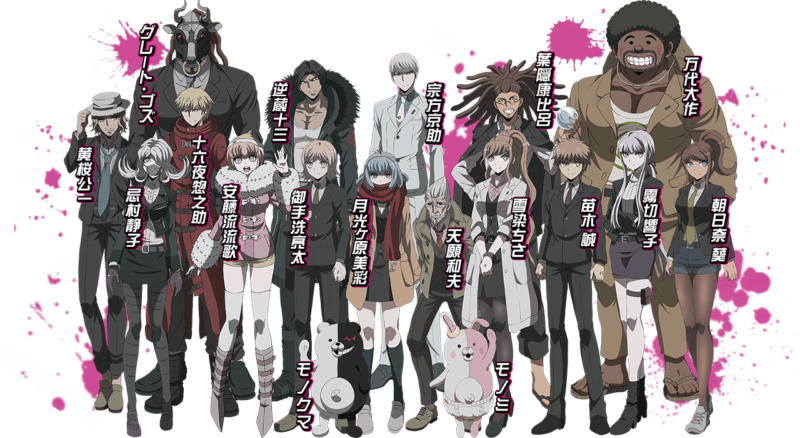 When a character died in the Danganronpa games, their loss had weight to it. The void left by their presence was tangible, and part of the tragedy came from the realization that the deceased would receive no more development; that the fun interactions they had with the rest of the group were a thing of the past. Simply put, Danganronpa 3 is unable to successfully juggle such a girthy roster of new faces while simultaneously attempting to further develop the original survivors, and this leads to many characters getting snuffed out before the audience is given a reason to mourn them.

Side: Future also features a couple of annoying fake-outs which were seemingly inserted into the story solely for shock value and to generate discussion, as they’re resolved as suddenly as they appear and end up being utterly inconsequential in the long run. It’s frustrating that a series renowned for its effective plot beats has to resort to cheap writing tricks in lieu of taking genuine risks.

For what it is though, Side: Future is a perfectly solid tale that remains compelling throughout its run thanks to some exciting action and a consistently engaging overarching mystery. If Danganronpa 3 were comprised solely of Side: Future then I’d have no trouble at all recommending it to anyone with even a passing interest in the Danganronpa series, such is its competency. 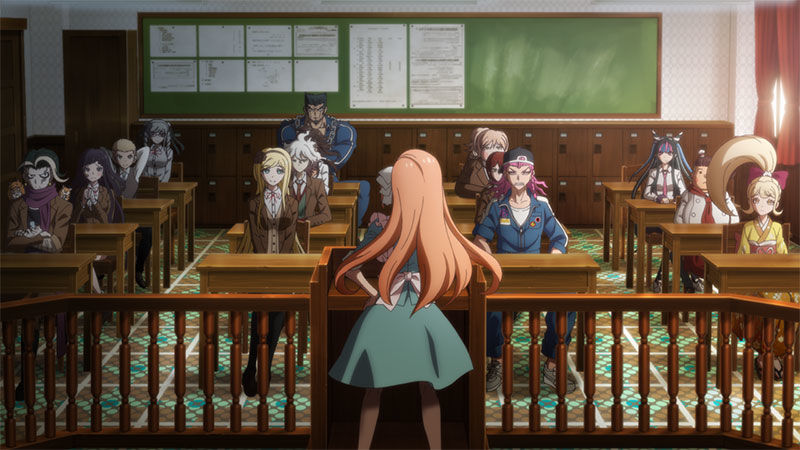 However, Side: Future is not the only component of Danganronpa 3. Its counterpart, Side: Despair (appropriately named as it fills me with distress every time I think about it) is a roller coaster of quality that starts out as fun but insubstantial, eclipses greatness and then nosedives into the ground in its final third.

This wouldn’t be a problem if the two halves of Danganronpa 3 were distinct entities as I could simply recommend fans watch Future and skip Despair, but unfortunately the series are intrinsically tethered together in such a way that making sense of one without the other is impossible. Essential exposition pertaining to the motivations and backstories of characters in Side: Future is delivered in Side: Despair which at first seems like a superb way to intertwine the two narratives but becomes increasingly problematic as the gap in quality between the two parts widens.

Danganronpa 2: Goodbye Despair is one of my favourite games of all time, so going into Side: Despair I was very enthusiastic to see more of the characters I grew to love so much during my time with DR2. That’s part of what makes the first handful of Side: Despair’s episodes fun to watch, as they’re essentially just a bunch of goofy skits featuring the DR2 class interacting in a low-tension environment. 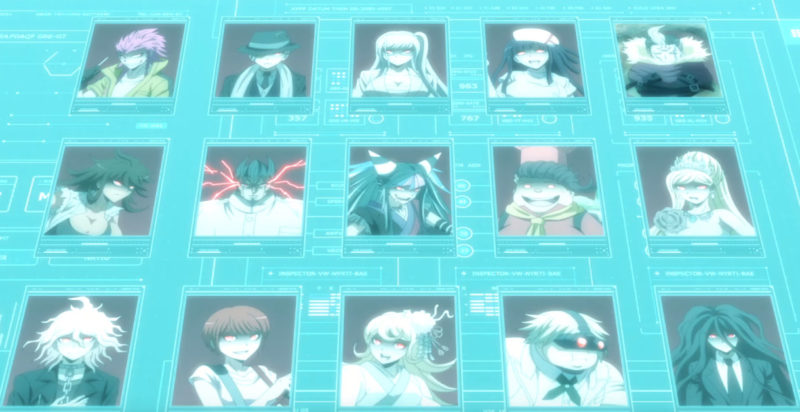 It pains me to say, but despite the initial smile factor Side: Despair’s connection with DR2 winds up being extremely detrimental to the overall quality of the series. Danganronpa 2’s big twist caused its characters to become even more fascinating and nuanced in retrospect. It made you question the morality of the students who made you laugh and cry in equal measure over the past 20+ hours, all while leaving the exact reasons for why each of them fell into despair open for interpretation. Side: Despair’s biggest weakness comes in attempting to tackle this plotline and boy does it ever make me wish they had simply left things ambiguous.

In the interest of keeping this review spoiler-free I won’t detail the exact lengths Side: Despair goes to to try and explain how 15 happy-go-lucky high schoolers were moulded into the most wanted terrorists in the world, but I will say this: the resolution is both frustratingly trite and absurdly predictable (seriously, as soon as a certain narrative element is revealed you’ll be able to guess exactly how it’s going to end). It honestly makes me feel like if they couldn’t make the plotline as compelling as DR2 alluded to they shouldn’t have attempted to address it at all.

What’s worse is that Side: Despair devotes pointlessly large amounts of time explaining things that didn’t even need to be explained and shoehorning in pointless cameos and unnecessary developments, further stretching the 12-episode structure that was already struggling to perpetuate momentum on the main narrative threads. As a result, Side: Despair is a bit of a paradox: simultaneously pointless and somewhat damaging to the Danganronpa canon (though I refute the notion that Side: Despair “ruins” Danganronpa 2; that’s ridiculous and anyone claiming that this anime retroactively devalues the brilliant games needs a serious reality check). 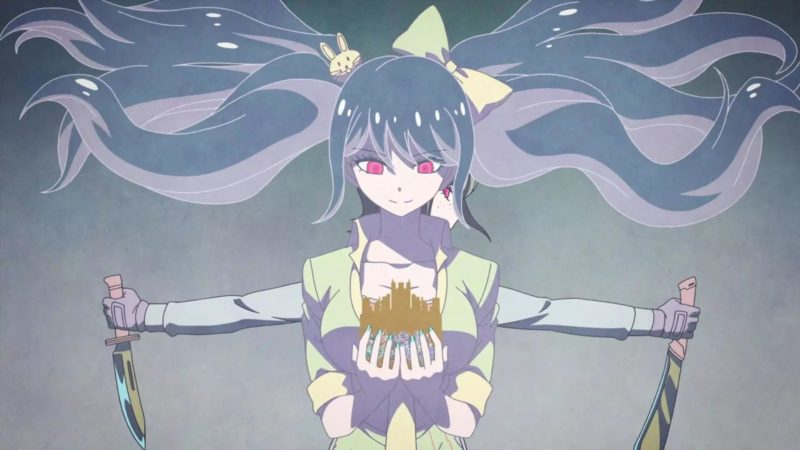 There are diamonds in the rough however in the form of a few strong episodes that save Side: Despair from being a complete misfire. The middle third of the arc provides insight into series antagonist Junko Enoshima’s motives which actually serves to evolve her character beyond the memorable-but-prosaic Joker expy she was before and allows her actions to be viewed in a new, more interesting light. Additionally, the episode depicting The Tragedy of Hope’s Peak Academy (a significant event in Danganronpa lore which was constantly alluded to but never detailed) is wonderfully gruesome and is sure to be adored by DR junkies as well as those enamoured by the likes of Serial Experiments Lain and its twisted ilk.

I’m also very happy to say that despite some rough patches (mostly in Side: Despair), Danganronpa 3 ends on a high note with a special episode titled Side: Hope (technically the 12th episode of Side: Despair but set directly following the events of Side: Future’s final episode. Side: Hope is chock-full of glorious fanservice and some of the best animation and voice acting Danganronpa 3 has to offer; it’s such a blast that I had a huge smile plastered on my face the entire time. Sure, the final resolution’s a bit corny and the fanservice might come across as a little forced, but it’s such a joy that overlooking the weak points and just enjoying the ride doesn’t require much effort.

Danganronpa 3 is also notable for having an incredibly strong thematic backbone that can elevate even its lowest points; in fact its dedication to exploring and critiquing its themes is nothing but commendable. In particular, the way it presents the theme of “agency” is superb and keeping that in mind makes every story beat more thoughtful. 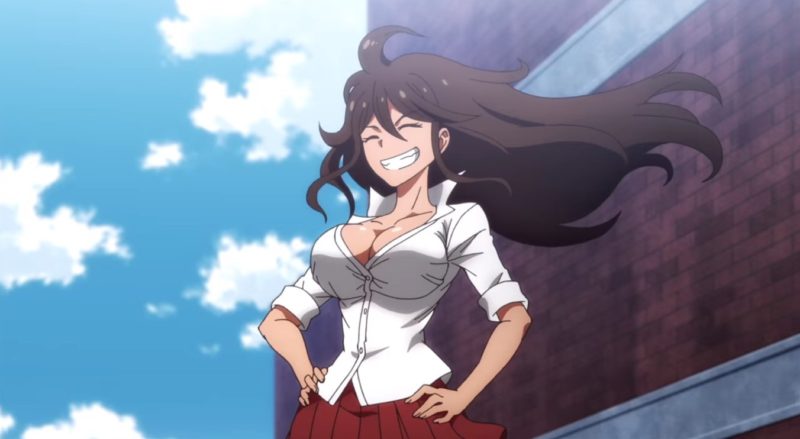 I must reiterate: there are aspects of Danganronpa 3 that are incredibly strong. The notion that a piece of media that falls short of expectations is automatically worthless is not something I subscribe to, so I implore everyone who’s played the Danganronpa games to give Danganronpa 3 a chance. The issues I have with Side: Despair obviously will not bother every viewer as much as they bothered me, and worst comes to worst you can always simply read summaries of the important parts of Side: Despair while watching the superior Side: Future to its conclusion. Danganronpa 3: The End of Hope’s Peak High School is many things: it’s fun, it’s exciting, it’s deeply flawed, it’s narratively clever, it’s disappointing, it’s baffling, it’s engaging, it’s frustrating, it’s fascinating… Though there’s a veritable chasm of difference between its highest and lowest points, there are definitely things to love about Danganronpa 3.

Just be sure to set your hope appropriately before you start.