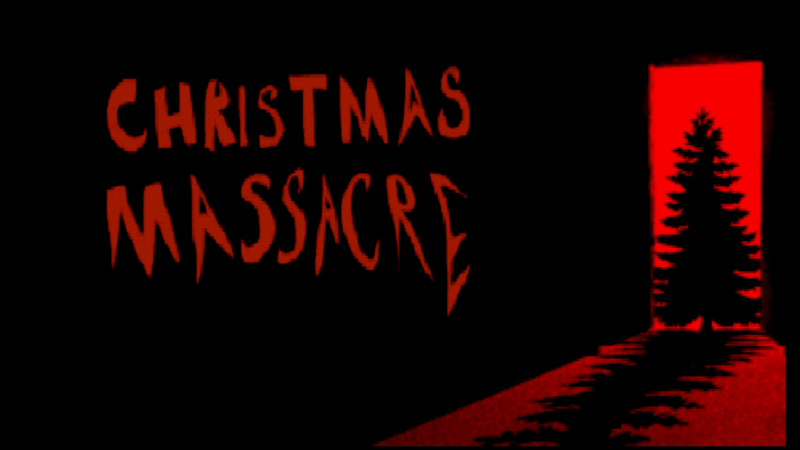 In the pantheon of horror games, there aren’t too many that come to mind as Christmas/Holiday season-specific. There are games that just take place in the snow like Silent Hill: Shattered Memories and Dead Space 3, but in terms of games where I’d point at them and go “CHRITMIT“, the only one that really comes to mind is Dead Rising 4, and uh, well. Puppet Combo, the developer behind Power Drill Massacre and The Night Ripper, has brought out a new Christmas terror just in time for the celebration with Christmas Massacre, a stealth-focused slasher with a holiday twist.

Unlike most Puppet Combo’s other titles, where we find ourselves stalked by an unrelenting killer, Christmas Massacre instead sees us on the flip-side of that bloody dynamic. We play as Larry (returning from a 2019 “rough draft” version of Christmas Massacre titled Blood Maniac), a child mental hospital escapee who’s grown up to be a fine, upstanding member of criminally insane society. After 20 years, the urge to bring holiday cheer via the blade has visited our Larry once again and with the direction of his helpful Christmas tree sidekick, goes venturing out into the winter wonderland to help clear up Santa’s naughty list. Carried out across a series of short missions and equipped with a kitchen knife, your only goal is to slash your way through partiers and otherwise naughty teens and co-eds, utilizing the darkness and your speed to take them down one at a time.

This change in perspective seems like it should result in a way less anxiety-inducing experience, but thanks to the skittish nature of our targets (who immediately freak out and run for the exits upon seeing you or a body) the tension is still surprisingly high. Getting caught results in a jarring snap to a “caught” screen, which will show either you, or the body that lead to your capture. The body shots are especially unnerving, as in the heat of the moment you don’t really get a full sense of just how mangled you left a corpse, but these screens do a great job of telling the full, horrific story. A great run of kills can immediately be undone by one misstep on our part, resulting in having to restart the scenario all over again — which causes each of the places we break and enter into to become weirdly addicting as we try to find the best possible path through the people inside. The best way I can describe it is sort of like a fully 3D Hotline Miami, but with a very different vibe and loop. You can even play in first or third person, complete with Micheal Myers mask vignette and breathing if you go for the former. 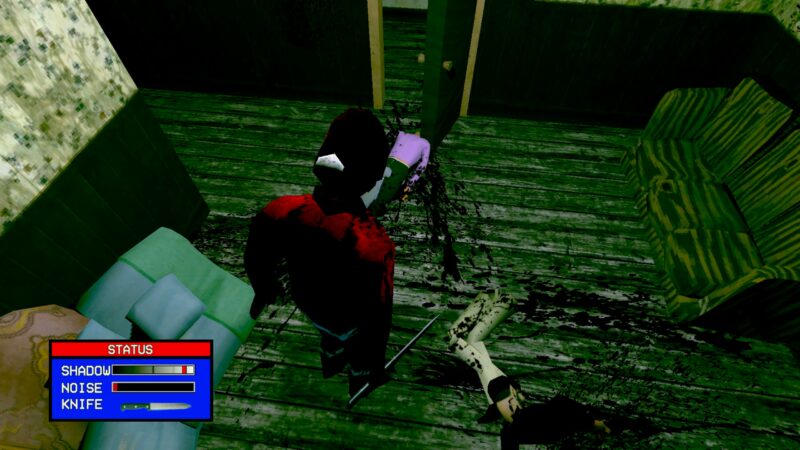 Killing isn’t necessarily easy either, as we have two main attacks — a stab, which takes multiple hits to down a teen, and a slash that can instantly dismember any and all victims in your path. The slash is easily the more useful, especially towards the end of the game’s 30-40 minute-long runtime, however, it requires weirdly finicky and precise aiming and range compared to the stab. While it can be frustrating at first to find that sweet spot, once you’ve gotten a handle on it kills becomes incredibly satisfying. By the end of any given stage, you’ll have become a master killer, sweeping through the optimal route to kill by, gleefully chopping your way through.

Moving on to presentation, Christmas Massacre offers a robust number of optional screen filters and pixel styles. If you’re into the retro VHS/90s 3D aesthetic, this game is for you and then some, as there are a dozen different kinds of filters to choose from and even more looks thanks to being able to combine them. I ended up opting for a combination of PSX graphics and a film Projector filter, as it added a cool flickering color effect to the screen that felt suited to the game’s vibe (as well as increasing the darkness almost tenfold). Be aware though, a few of these filters might go a smidge overboard and make the game almost impossible to see thanks to how messed up some of them are (for instance a broken TV filter that makes the screen appear to be shorting out). I do, however, strongly recommend playing with at least one of the optional filters on, as the game is clearly meant to be experienced at least somewhat crunchy, and setting both filters to off results in a much less satisfying vibe. 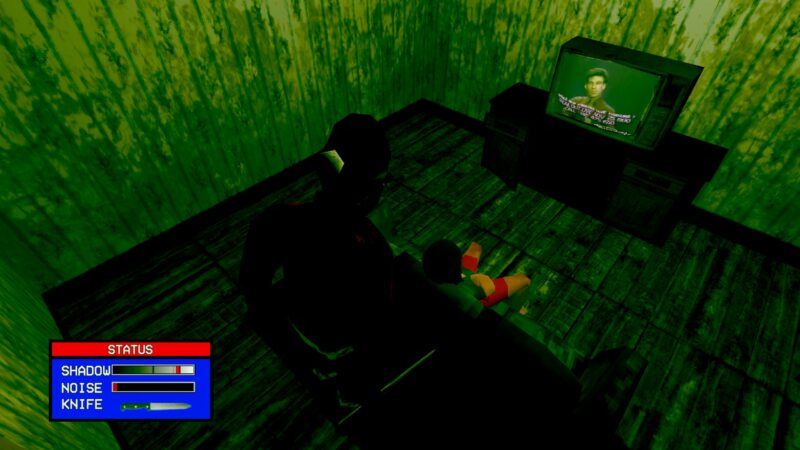 Perfectly complimenting these visuals is the game’s score, which is some of the best music Puppet Combo has ever had in my opinion. A mix of creepy, Manhunt-esque ambient tracks, twisted Christmas music, and some spectacular electronica, Christmas Massacre‘s tunes are easily worth playing the game for alone. Immediately within just the opening level, I was taken in completely and by the end, I was eager to seek out the soundtrack standalone. Massive props to Clément Panchout and KC “MXXN” Luna, I love this score (and have been listening to it on a loop while writing this).

Christmas Massacre is a short but very, very sweet experience from one of the masters of retro horror that’s sure to make your holiday season just that much creepier, and honestly a really great slasher game regardless of the seasonal coat of paint. These games aren’t known for being especially long, but the arcadey nature of this experience (rather than the more straightforward survival vibe of other retro horror games) makes me yearn for a bit more. It’s addictive in that old-school kind of way, where failures don’t frustrate so much as remind you that you just barely missed and you just need one more try. I’d absolutely play a sequel to this focused on other holidays, or even just more this if I’m being honest. Overall, the perfect stocking stuffer to round out your season’s holiday treats!

A Steam review copy was provided by the publisher